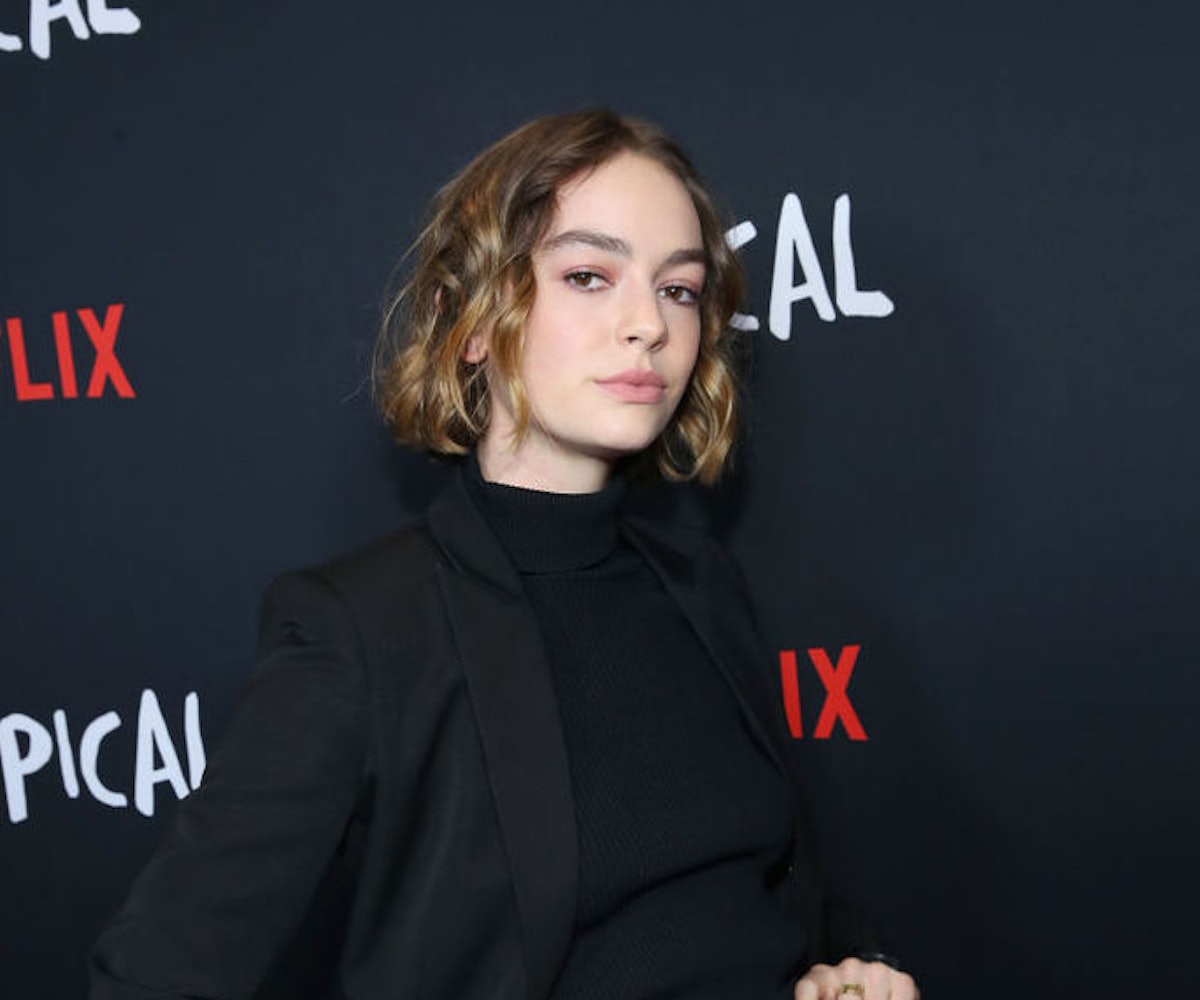 On Brigette Lundy-Paine’s IMDb page, you’ll get a little more than the usual boilerplate info. Her filmography paints a picture of an ambitious young actress with one Woody Allen gig under her belt and collaborations with Alexander Payne and the idiot savants of Jackass on the horizon. Lundy-Paine is also currently having a moment for her performance in Netflix’s series Atypical as an endearing teen figuring out how to best support her autistic brother, played by Keir Gilchrist. But beneath that, the bizarre trivia section tells of a strange young woman who encounters fairies, recreationally washes dishes, and dreams of abandoning showbiz for the lab coat lifestyle. On Atypical, she’s just as spirited and proudly eccentric as she is on the phone, all too eager to chat about her eclectic interests.

After discussing her new perspectives on the autism spectrum and her comfortable spot between girlhood and adulthood, we ran through the IMDb page’s stranger bullet points with the self-proclaimed “absolute weirdo.” She was perfectly game to go into detail on her childhood Anais Nin fantasies, violin abandonment issues, and passion for nature.

Is there anyone in your life on the spectrum, or did you otherwise have any personal connection to the material in Atypical?

My mom was a special needs teacher for a long time, she worked at preschools. So I grew up with kids on the spectrum through her. On set, Anthony [Jacques] was autistic, he plays Christopher on the show. He was one of the first adults I’ve hung out with, knowing they had autism. When I got cast, I started really researching autism, reading up online. But most of my education was being on set, learning from our consultant on site, talking with Keir [Gilchrist]. We all kind of learned together. We all passed around The Reason I Jump by Naoki Higashida, a 12-year-old boy who writes about what it’s like to have autism. That was huge for a lot of us. A lot of the people working on the production had kids with autism. There were a lot of conversations with firsthand experience.

What misconceptions do you see the show as trying to correct?

Because the show is from Sam’s perspective, you get a feel for what life is like for him. It clears up a lot of misconceptions about empathy, or not understanding emotion. When you’re inside Sam’s mind, it’s clear that the emotions hit him so much harder. It’s not that he doesn’t understand, it’s just that it’s harder to connect. A lot of people with autism are very sensitive. I hope viewers will be able to approach people in their life who have autism with a little more understanding. Sam’s a kid, who wants the same things we all want.

There’s been some pushback against Keir, who is not autistic, playing a character who is. How would you address concerns of representation?

I know that the casting team auditioned many people with autism and Keir was just the one that got the part, for whatever reason. I think that the show will work like Transparent with Jeffrey Tambor, how they cast a man to play a trans woman, but that opened the door to employ other trans actors and tell other trans stories. I hope that Atypical can do the same thing. If we get picked up for more seasons, we’ll get more autistic actors and more perspectives.

You’re also in Alexander Payne’s new movie Downsizing, one of this winter’s big releases. What can you tell us about that?

I was there for two scenes, about three days in total. But every second I spent on set was totally ridiculous. They built the weirdest stuff: The first set I was on was a mansion where everything was made out of huge versions of small things—a table made out of playing cards, you know? Massive wine glasses all over. I play Christoph Waltz’s lover, and I get to be all pouty and French. That was so much fun because I usually play sad teenagers who love sports. That was the first time I got to wear a slinky dress and act cute.

You’re 23, an age that’s sort of caught between teen roles and adult roles. Do you feel like you’re in a transitional phase of your career?

I’ve been pretty lucky, in that I did a lot of projects before any of them started coming out, so I could go into auditions and determine for myself whether I’d be seen as a girl or a woman. And up until now, when people are going to start seeing my work, I’ve been pretty comfortable riding that line. I’m also kinda into playing teenagers because so many teenagers I saw on TV were having affairs with teachers, obsessed with how they look, and I want to reshape how teenagers see and respect themselves. Their journey of self-love, I want to take that seriously. ]

I also saw that you’re going to be in a movie with a bunch of the Jackass guys? That must have been quite an experience.

They brought in a monkey fluffer.

That is exactly right.

I don’t know if you were aware of this, but your IMDb page is bonkers.

I thought we could go over a few of these points. It says that when you were a young girl, you glimpsed some supernatural activity near your home.

I did. There was a garden on the side of my house where I’d sit for hours, waiting for fairies. I would put fairy dust on my eyelids. There was one fairy named Snicker who I’d see in the garden and at school, who lived in the clouds. I hoped one day he’d throw down a ladder for me.

Was this a formative relationship?

Oh, definitely. I’ve always been an absolute weirdo, and it’s only in retrospect that I realize that. And I’m thankful for that part of myself because it’s made life more fun.

Next up: “When not acting, Brigitte enjoys reading, joking around, cleaning her dishes, and cleaning the dishes of those she loves.” Are you particularly passionate about washing dishes?

I am, it’s one of the things I do when I’m not working. I’ll gather up all my roommates’ dishes, and I’ll just wash them. It’s like doing a puzzle: loading the dishwasher, scrubbing it clean, drying. I find it to be a healing, calming process.

You must be everyone’s favorite roommate, always traveling and doing dishes whenever you’re home.

Yeah, but I make up for it by singing and playing violin really loud at odd hours.

When did you take up violin?

I played it when I was young and bought a new violin recently, like, ‘Once you learn, you never forget!’ You forget. I haven’t remembered yet, but I’ll wail away on the thing. I make noise, I’m not sure if it’s song.

Your IMDb also says you’ve kept a series of journals throughout your life that you’d like to option as a movie franchise.

Yeah, well, you know Anais Nin? I read some of her journals from Paris, and she always wrote with the intention that one day, her work would be found and published. I was doing that from way too early an age. From, like, age five, I wanted my work to be found after I died and adapted into a film. I’ve kept notebooks for years. I have like 12 or 13 from the last five years. So if you know any big Hollywood producers, give them a ring.

And it says your first passion in life was not acting, but science?

When I finished high school, I applied to seven schools for science and only three for acting. And I didn’t get into a single one for science because I had never done anything that would imply I’d be a good science student, I’d only been in plays. I ended up going to school for acting, but I do still hold a torch for my dream of being a scientist. I really wanted to do environmental science.

As a political issue, is that something you feel strongly about?

Oh, definitely. If you want to talk about politics, we can talk about politics, and that’s definitely one of them. We’re screwed. We gotta get ‘em to believe. It’s all tied in together, too, the environment and Charlottesville. I’m actually going to a protest this afternoon. I try to get out there and donate what I can, to the black student union at UVA and LGBT groups on campus.