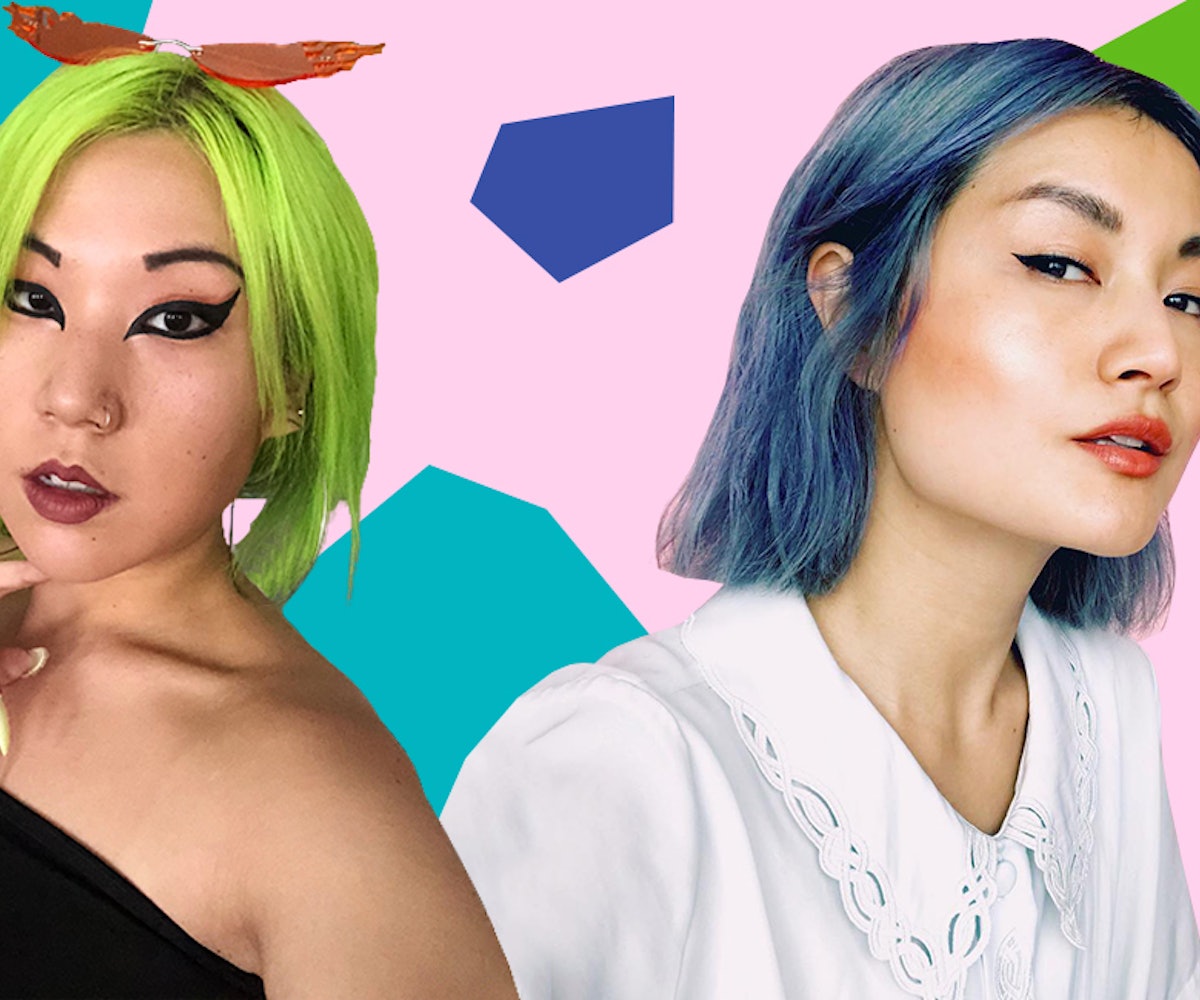 Allure’s digital beauty editor Sable Yong and I have been buds since we worked on the same floor at Condé Nast. And even beyond being colleagues, we have some other overlap in our lives. Perhaps the least weird of which is the way we occasionally get confused for each other, because that can be chalked up to good, old-fashioned racism.

But another overlap we have is with our affinity for brightly colored hair. In February, Sable wrote a piece for Allure about the way in which her deep blue hair had unintentionally become a siren call for dumbass dudes near and far, and I messaged her that I was going to conduct my own study. I had an appointment with our mutual colorist (shout-out Elizabeth Hiserodt at Cutler SoHo!) and joked with Sable over Instagram about how I just needed some reaffirming male attention in my sadly celibate post-breakup life. “Omg YES now you have to do field research,” she wrote. I laughed out loud, but then immediately asked Elizabeth if she could turn me a muted "Sable Blue."

Unfortunately, things didn’t go as "well" for me as they did for Sable. In fact, I would argue I actually got less attention with my watered-down Clementine cosplay than when I had previously rocked gray strands. And if I looked better as a grandma than a knock-off Kate Winslet, then maybe brightly colored hair wasn't the lust-magnet I'd been led to believe it was. Or maybe blue just wasn't my color. Because, in a classic instance of “be careful what you wish for,” when I decided to go neon green for summer a few months later, I suddenly understood exactly what had happened with Sable.

My brightly colored hair journey started when, in a state of boredom, I asked Elizabeth to turn me vibrant green—like green-apple-martini-vomit green. And boy, did she deliver—to the point where my hair now glows in the dark.

I instantly loved it (it's a great look; see above), and I flounced back home, on a high from my new “hot Grinch” vibes—a feeling that was only reinforced when I got all my drinks paid for later that night. My Leo ego was obsessed.

Sable laughed when I told her what happened, mentioning that a similar thing happened to her when her hair was a super-bright, deep blue for a time. “This is a generalization, but hetero dudes especially are like fucking moths,” she said. “They just see a bright, shiny thing. Why do you think we wear sequins?”

However, as much fun as that first day with highlighter-hued hair was, by the end of the following week, the figurative glow had worn off (my hair was still bright as ever). Here's what happened: I was followed down the street multiple times, propositioned outright by strange men in the middle of the day, and accosted by a mentally ill woman on the train who screamed I was a “fucking slut trying to rub my dirty pussy all over people.” It was disconcerting, to say the least, and it was hard not to catch myself occasionally falling into the toxic rhetoric of “maybe I was asking for it,” by dyeing my hair such a bright color.

Sable also recalls a similar situation, in which she was forced to wonder if she was inviting attention, when a stranger AirDropped her a note on the train, writing, "I love your hair color. How do you get it that color?"

“Then he was just like, ‘Hey, look over to your left,’” she shudders. “It was horrific.”

Why do strangers, particularly dudes, feel so okay with testing these boundaries?

“I don't know if it's just the message that [these hair colors] send out: ‘Please talk to me. I want attention,’” Sable mused. “[But] it’s absurd. Like, 'Yeah, that's definitely why I'm coloring my own fucking hair… for you.' You know?”

When someone has a vibrant hair color, people tend to assume it’s a part of their “loud” personality, and that they'll be open to being approached—even if the situation may be completely inappropriate or uncomfortable. After all, as Sable hypothesized, that's probably where the age-old stereotype of redhead women being promiscuous derived.

But the fact that someone’s choice to vibrantly color their hair acts as a beacon for harassment is equal parts disturbing and disheartening. In what world does someone else’s decision to color their hair mean that they want uninvited sex? What sort of logical leaps do you need to make in order to believe that self-expression correlates to "Hey, please harass me?"

“I feel like the people who believe that are the same people who don't buy into things like self-care,” Sable reasons. “Or they think that women still wear makeup for men, and they still don't buy that women dress for themselves and for self-expression. It's like, women have been denied the ability to self-express for so long, so even now, it's still odd that we're in this age where women can dye their hair weird colors.”

Then too, there's another shared factor in our experience: We're both Asian-American. There's been a spate of articles about Asian-American women dyeing and bleaching their hair as a “form of rebellion,” a narrative that Sable and I both resent because it completely erases our agency as women who may just enjoy experimenting with our styles.

“Asians, in general, are genetically so homogenous, so to make such a drastic choice as dyeing your hair blue or red or green is a very physical way of standing out,” Sable said. “But it's funny because it's like, ‘Oh, you can't tokenize Asians anymore, so let's just tokenize this thing they've chosen to do to stand out from being tokenized.’"

After all, even if the choice to dye your hair is part of a conscious or even subconscious decision to stand out, it’s strange that this narrative has to be attached to Asian women, specifically, who are already fetishized to no end. Sable and I agree that it’s not fun to continually have to explain ourselves, and to assign meaning to spur-of-the-moment decisions rooted in our backgrounds as punk kids, while other ethnic groups don't have to defend their decisions in the same way.

And the constant need to explain to people that what we're feeling and experiencing is real, and extends beyond our hair, and into how we're treated by people in general. As I said to Sable, “I think we're definitely just socialized as women to be like, Am I imagining this?" As if we can't tell when we're being targeted, "like we can’t vocalize these things because it’s too pompous or self-absorbed of us.”

“We're definitely socialized to self-doubt ourselves and to not make a big deal,” Sable concurred. “But it’s real. I don’t think anyone can say it’s not.”