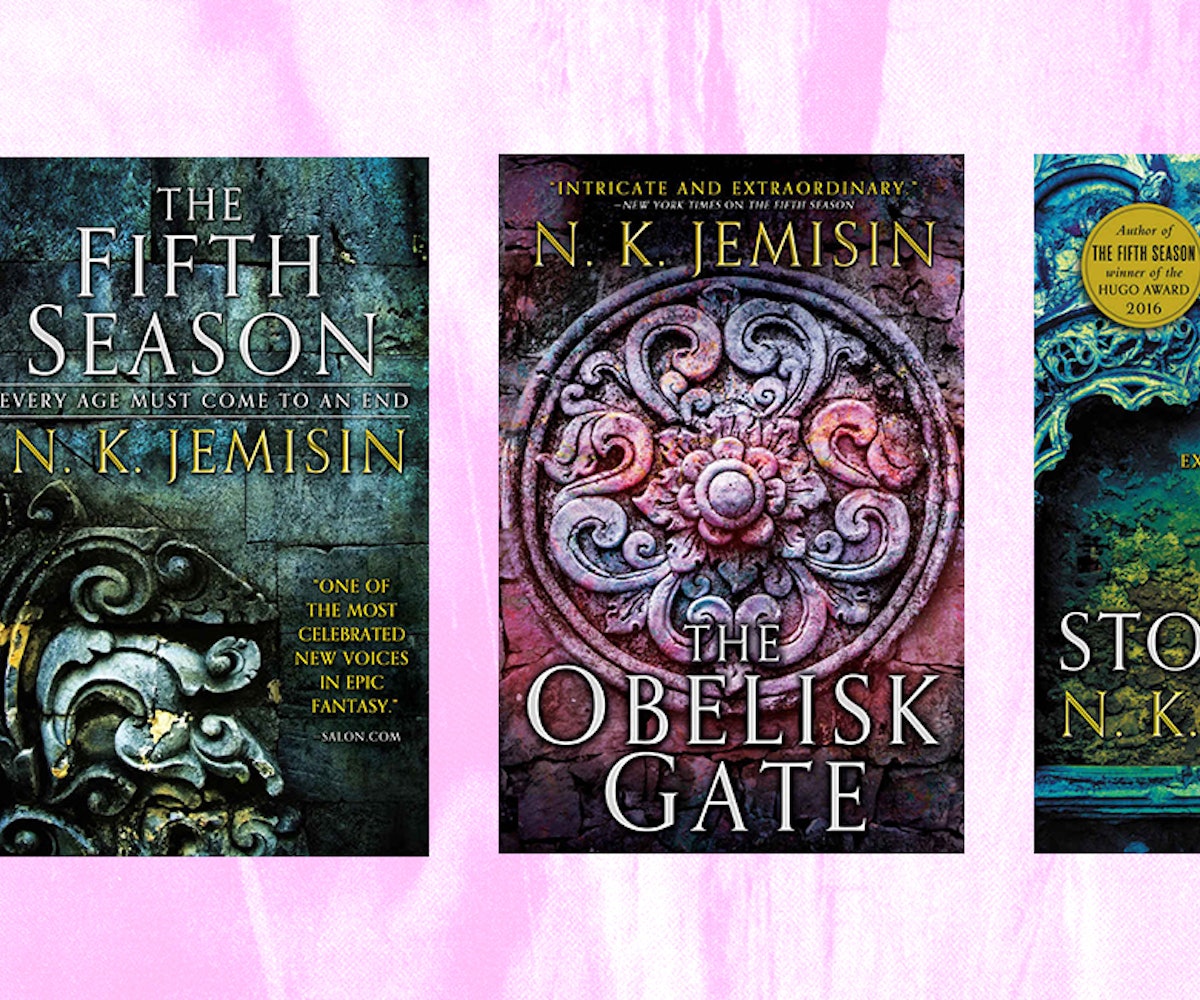 "For some crimes, there is no fitting justice—only reparation."

Forget what you think you know about fantasy novels: N.K. Jemisin’s Broken Earth trilogy takes Euro-centric fantasy, with its kings, courts, and dragons, and shakes things up from the inside—not unlike the earthquakes that plague the series’ world.

Unlike more familiar fantasy series, such as Harry Potter or Lord of the Rings, in which a dangerous outside force (see: Voldemort) threatens a society's status quo, in Jemisin’s series, the status quo itself is the villain; it is the true enemy against which an oppressed minority must dedicate their lives to fighting.

The trilogy begins with the novel The Fifth Season, and is set in a single country-continent known as The Stillness. Since the beginning of The Stillness’s recorded history, it has been wracked by its Seasons—catastrophic climate events that act as mini apocalypses, destroying society when they strike every few hundred years.

This has created a society of what are essentially doomsday preppers, traumatized from the constant threat of annihilation; within it exists a subclass of people known as orogenes. Orogenes are magicians of sorts, who can control the movements of the “Evil Earth.” Because of this immense power to force the earth’s crust to bend to their will, and thus keep Seasons temporarily at bay, they’re a necessary element of society in The Stillness. But their powers are dangerous. There is the risk of accidents at the hands of the untrained orogenes’ accidents, but there is also the fear of the immense power a trained orogene can wield. As a result of this fear, the orogenes are massively oppressed; they're the victims of genocide within their society, and either slaughtered within their villages, or, if they’re “lucky,” sent to live at a school known as the Fulcrum. There, orogenes are trained, secluded from society, and enslaved by their own people.

Leading this story are three women: Essun, a middle-aged school teacher and secret orogene, whose story begins when her husband murders their infant son; Syenite, a young Fulcrum-trained orogene struggling to find her way as she discovers the underlying evil around her; and Damaya, a child whose parents cast her out once they discover her orogenic powers.

As the corrupt core of this society is laid bare, Jemisin’s characters struggle—not always heroically—with a heart-wrenching dilemma: What future does a society built on oppression, enslavement, and brainwashing truly deserve? As the series goes on, any hope for a definite answer, becomes increasingly unclear, and the prospect of the absolute destruction of the “broken earth” as a means of salvation begins to sound more and more reasonable.

Jemisin is the first black writer to win a Hugo Award (prestigious annual awards for sci-fi and fantasy literature) for best novel—and she's won it twice in a row, for the first two novels of this series, The Fifth Season and The Obelisk Gate. The third and final book, The Stone Sky, one of the best conclusions to a fantasy series I’ve ever read, has been nominated as well.

More remarkable still is Jemisin’s incredibly dynamic and diverse cast of characters. Nearly all the main characters of the series, and in fact the primary composition of society, are people of color. Syenite is bisexual, her best friend is gay, and another character is trans. These characters are allowed to exist wholly as themselves, and their race, sexuality, or gender identity is merely one of many parts of the whole. Rather than identity, it's their formative trauma that acts as the structure around which each character revolves, and is, ultimately, what each character must learn to overcome. Essun’s pain from the murder of her son, Syenite’s realization that the world she inhabits is inherently evil, and Damaya’s betrayal at the hands of the people she trusts the most—her parents—defines the ways in which these women operate in the world—with literally earth-shattering consequences.

The Broken Earth books aren’t the sort of fantasy novels you pick up to escape the minutiae of your day. The Stillness is so detailed and different from our own reality and the tropes of typical fantasy novels that the reader can’t rely on familiarity to plow ahead. They’re violent, and heartbreaking, and there were points where I had to stop reading because my love for the characters and terror at their futures was so heightened, I couldn’t take it. But when I turned the last page of The Stone Sky, I was rewarded, not with a happy ending entirely, but with hope. That through a grueling excavation to the rot at the heart of society, we can find something akin to justice.