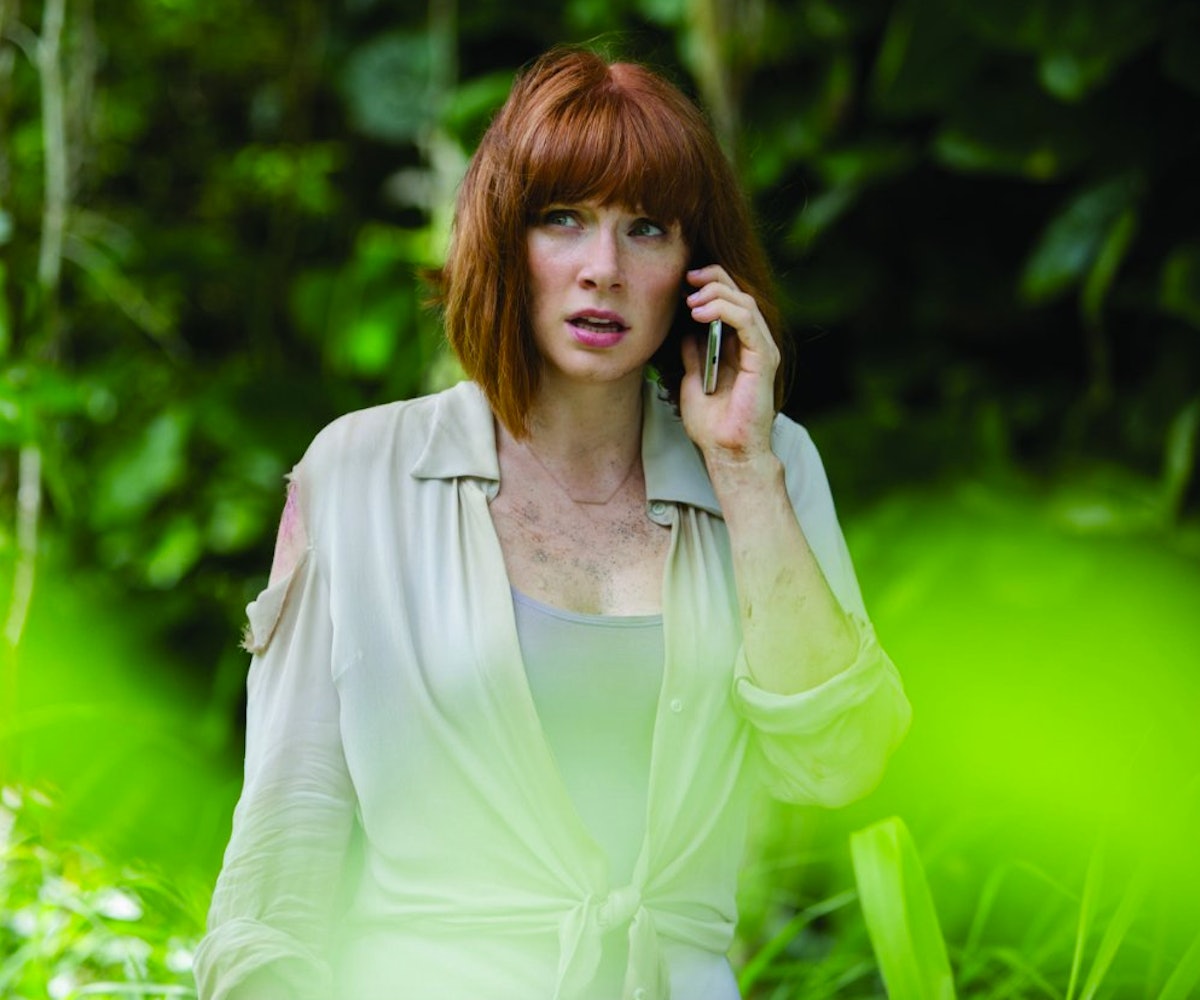 Back in April, an unexpected controversy enveloped Jurassic World when a promotional clip from the film showing an exchange between stars Chris Pratt and Bryce Dallas Howard was called sexist by Avengers director, Joss Whedon. Set 22 years after the original blockbuster, Howard plays an official at the dinosaur theme park that gives the movie its name. Compared to Pratt's loose, charismatic animal trainer role, Howard's character came off as uptight. "I’m too busy wishing this clip wasn’t '70s-era sexist. She’s a stiff, he’s a life-force — really? Still?" Whedon tweeted at the time. He has since apologized and deleted his tweet, and director Colin Trevorrow addressed the matter. When we spoke to Howard recently, she seemed confident that once people saw the movie — which hits theaters this Friday — they'll see that her character is much more than a damsel in distress.

And she's right. Jurassic World, easily the best sequel in the dino franchise, feels like an old-school action movie, in the vein of Romancing the Stone: A man and woman butt heads initially, but are a eventually brought together through the power of witty banter and a shared interest in not getting eaten by a genetically engineered dinosaur. We spoke to Howard about her take on the controversy, what it was like acting alongside dinosaurs, and the power of Pratt.

I think Jurassic World is the sequel the original Jurassic Park has always deserved.

You know what, in a way, this story had to be told 22 years after the original. You need that space of time in order to really have a major evolution.

Exactly. You shared a very emotional scene with a dinosaur in this movie. What was that like?

That was really emotional because that was an animatronic dinosaur — and it was a real performance from an animatronic dinosaur — and it was so realistic. It felt really intense because it felt like a real animal going through this moment. On that day, [Jurassic Park creator] Michael Crichton's six-year-old son — who his wife was pregnant with when he passed away — was on set. And this young boy who never met his father visited set that day and turned to his mom and said, “It’s a real dinosaur!” I burst into tears because of the legacy and gift that his father, Michael Crichton, gave us [is] the sense of possibility — that something like this might be possible.

You got to act alongside Chris Pratt in his second leading role in a blockbuster. How do you account for his meteoric rise to moviestar status?

He has it all, honestly. He has all the things that we want in a great, classic leading man. He’s charismatic, he’s funny, and he’s attractive.

That isn’t always required, but it's true. He has a gravitas; he’s extraordinarily centered and he’s an extremely thoughtful actor. And above all of those things, I think what people are responding to is his heart. This is a guy who just has the most beautiful spirit, and has a true, genuine kindness in everything that he does. I just adore that man. I saw Guardians of the Galaxy on one of the last days of shooting with a bunch of people on set  — we all went together. And, of course, the moment you see that movie, you get what’s in store for him. And it made me so happy because I believe that good people are the most successful people. Sometimes there’s this idea that in Hollywood that a lot of misbehavior is tolerated. People don’t necessarily rise to the occasion because, like with a child, if you don’t set those boundaries, some will cross them. And Chris is someone who is constantly working to be the best version of himself for others. That’s the guy who I want out there to be successful because he’s an incredible example for others — and he deserves it.

You got to play a woman who has something to do. You’re not just on the other end of the phone worrying about whether Chris Pratt will get home to you safely. Was that particularly satisfying for you?

In anything, [I] want to play a layered, dimensional character. And what I particularly loved is that she’s someone who when you first meet her, is in a position of authority — she runs the park. She’s responsible for the bottomline. And it’s not that she’s a bad person, but she makes a lot of misguided choices, and her actions are not ultimately in line with her values. In big movies where there needs to be a lot of screentime devoted to action sequences, it’s far easier to keep a character like that the same throughout. But I have so much respect for Colin Trevorrow, the co-writer and director, because he created a character that starts at that place, but evolves to someone who actually steps into her true power and reconnects with her humanity, and is ultimately heroic.

What's your take on the controversy that erupted over that clip that was released? Only in this day and age can there be a controversy over a promotional movie clip.

Yeah, it’s so tough. In order to tease or market a film, ultimately, you need to share moments — especially with a film where there’s going to be interest and curiosity. Those moments are going to be talked about. Obviously, I see things from the context of the whole movie, but in this isolated circumstance where people talked about that, my reaction was just kind of, "Oh no, oh no!" It’s ultimately the opposite of the perception that that clip created. So, in a way, I felt at peace because I understood that the movie's going to come out and it’s all good.