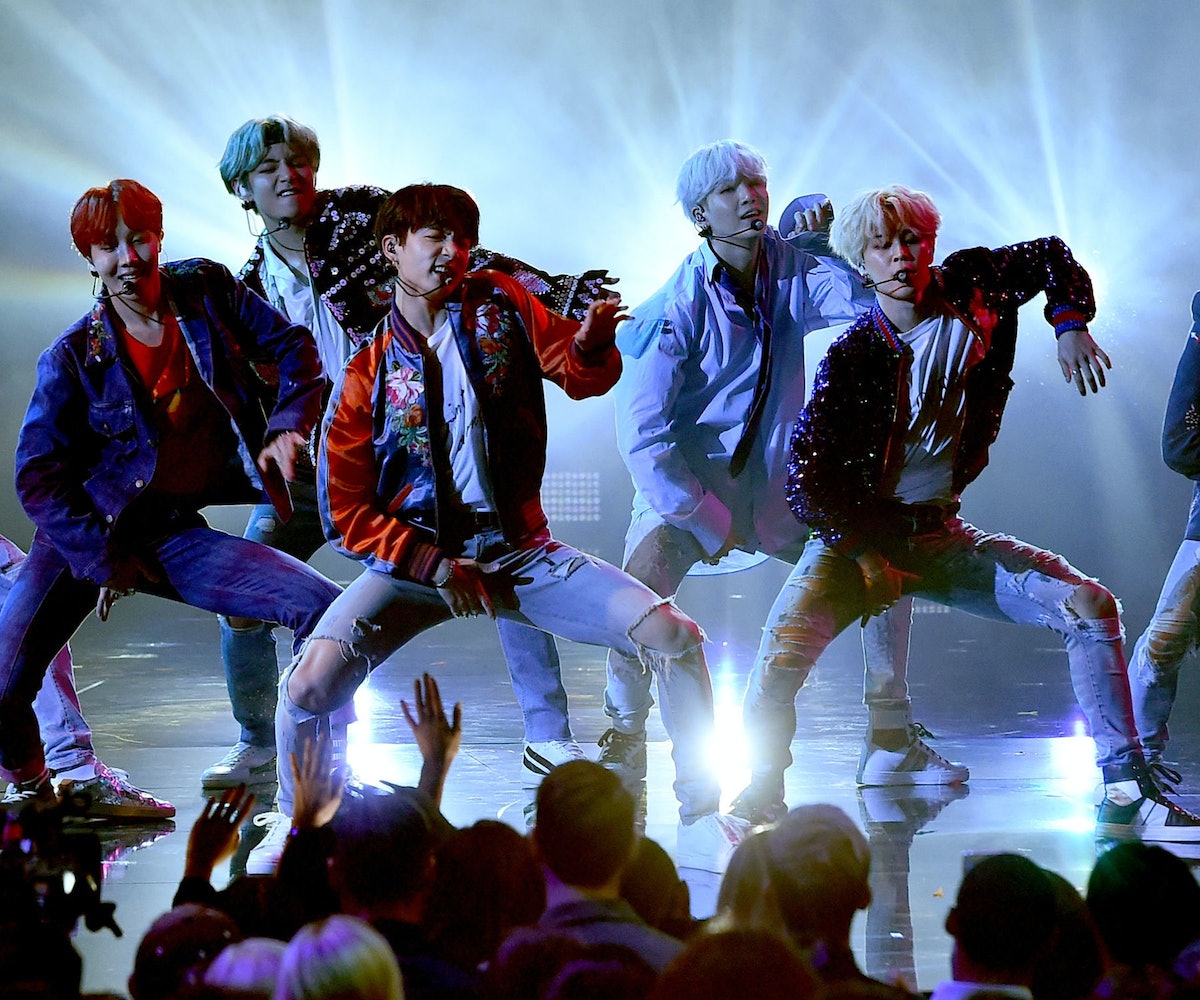 BTS has exploded onto the American pop scene in the past couple of months. Their album, Love Yourself: Her, became the highest-charted K-pop album ever on Billboard, and they earned their first Hot 100 hit with “DNA" back in September. They won a Billboard Music Award for Top Social Artist, and the recent American Music Awards marked the band's first-ever TV performance in the United States. While most of us are just now learning the names of the seven-member group (which, by the way, are Suga, J-Hope, Rap Monster, Jimin, V, Jungkook, and Jin), the BTS ARMY has been saluting their talent for much longer.

The ARMY fandom (which is an acronym for “Adorable Representative M.C for Youth,") is a unique one. The fans we reached out to hail from Mexico, Honduras, United Arab Emirates, and the U.S. They come from different parts of the world, but are all bonded through a band that performs in a language they don't even speak. The fact that BTS consciously choose to perform in their native language—even with their growing popularity—is part of the reason fans respect them so much. “BTS choosing to release songs in Korean while breaking out in the West with these songs is a prime example that it is possible for your music and content to be loved without the need to completely assimilate to other cultures or languages," an admin for the Twitter account @bangtanUAE tells us.

As BTS continues to creep into mainstream notoriety, we spoke to some fans about their love for the band, how they feel about their recent uptick in popularity, and whether they would consider them to be the biggest boy band in the world right now.

I remember thinking they were different from the other K-pop groups I had seen. At this point, I had been into K-pop for about a year, and they really stood out. I did more research on them and started liking them even more. The chemistry they had with one another was something I liked. The way they talked about music and spoke about dreams and being young really pulled me in.

When would you say you first became part of the ARMY?

I officially decided to call myself an ARMY and give BTS my all December of 2013, about six months after they debuted on the music show M Countdown.

What’s the wildest thing you’ve done for the band?

Oh, god. I think, compared to most people, I'm not that hard-core! I've seen them perform all over the U.S., Korea, and even Mexico; I've lied to get out of work and family engagements to go see their shows; I've slept overnight on sidewalks and waited hours in line in freezing temperatures, but, in all honesty, I know about a couple dozen other girls who have done the same thing!

Like BTS has said themselves, I think it's really cool when people compare them to other great groups or artists. My only issue is, I do not want them to be dubbed as an “Asian 1D” or the “Asian *NSYNC,” etc. They are their own group with their own taste of music and style. They write their own music, and their songs have a variety of deep and meaningful lyrics. They are and deserve to be just BTS, a talented and amazing group of artists in a class of their own.

How do you feel about them becoming mainstream?

I am both excited and scared for them. While them gaining more popularity in the West can be good—i.e. bring them more opportunities as artists—I do not want them to be seen as just some novelty. They are artists who take their music very seriously and work hard on it and everything else they do. I hope they get treated and respected as such. I have no doubts—if people were to keep an open mind—that they would love BTS and appreciate their talents as much as their fans do. I am very excited to see how far BTS will go.

That's kind of a tricky question. On the one hand, if I say yes, people can say I'm biased. If I say no, that doesn't feel entirely true [laughs]. I definitely think they are the most talked about boy band in the world right now.

Their dance moves. The first music video was "Dope," and I was struck by how amazing these guys danced. I've never seen any Western artist dance this way, so it was very surprising. The beat of "Dope" was also very catchy and, although I denied liking it at first, I had the song stuck in my head for the remainder of the week.

When would you say you first became part of the ARMY?

I first became part of the BTS Army about a week after I was introduced to the “Dope” music video. I watched their music videos during my free time, and I watched their dance practices, as well. Slowly but surely, I started remembering the names of the members, and I became obsessed without really trying. If I could describe the entire process, it'd be sort of like a black hole. You get sucked into BTS, and I'm grateful I did.

BTS are unique, and I feel no group deserves to be compared to another, because each individual group is hard-working and are there to represent themselves. Usually, most of the people that compare BTS to other groups have not listened to a majority of their music, so it's quite disappointing because, once you get a good look at them, they are in no way similar to any groups that they're compared to.

How do you feel about them becoming more mainstream?

The mainstream popularity is welcome, because I believe it's what BTS truly deserves. Of course, with more popularity comes more insults and racist comments, but I believe there's a lot more positive than negative happening. With time, effort, and new music, I truly do believe BTS can become as mainstream in the U.S. as they are in Korea.

I would undeniably say that BTS is the most popular boy band in the world. They're breaking K-pop barriers, recently becoming one million physical album sellers in Hanteo, which hasn't happened in 16 years. Also, their performance on the AMAs and their Top Social Artist win on the Billboard Music Awards has helped them introduce K-Pop to the Western music world, something that was once thought impossible. K-pop isn't quite local anymore, and we have BTS to thank for that.

@bangtanUAE, a group of students in the United Arab Emirates

When they released their album The Most Beautiful Moment In Life Pt. 1 in 2015. “I NEED U” was the title song of that album, and it was the first track I heard. I’d have to say that the first thing that caught my attention about BTS is their unique music style. Something about their music really made me want to look them up more, and I did. Also, the way that they treat us, ARMY members, is unlike how any artist treats their fans. I guess you can say they made us feel like family.

When would you say you first became part of the BTS ARMY?

When The Most Beautiful Moment In Life, Pt. 2 was released. This album made me open my eyes to the world and see different perspectives. It showed me the beauty in BTS' music, they showed me how meaningful messages can be turned into something they are passionate about.

How do you feel about them becoming more mainstream?

It’s great that more and more media are now recognizing BTS’ talent and skills. They have been popular for a while, just not in Western media. BTS has already built a strong, dedicated fan base in the U.S.; to be honest, their popularity in other countries came first before they were able to gain explosive popularity in Korea. I think, with all of the media exposure, their popularity will continue to grow. As long as BTS continues to do what they do, which is pretty much everything—from vocals, rapping, dance, producing/writing, doing social media and even variety shows, more and more people will eventually set eyes on them.

It’s still an unfamiliar but gratifying feeling to see them being reported on by so many popular/influential media labels or being recognized by popular Western artists. I can’t seem to wrap my head around it completely since I’ve personally been a fan of BTS when they were still struggling and at the bottom. So I can’t say we’re most popular right now, but I think perhaps we’re getting there.

@BTSARMYFANCLUB, a group of students in Mexico and Honduras

What caught our attention is their music. Their style is different than others, the lyrics are really cool, and the powerful choreography makes them amazing. They reflect situations or problems in society and talk about loving each other and yourself in their songs. Also, when we saw their TV programs, the Bangtan Bombs (small video clips that they post in YouTube) and general content about them, we started to like their personalities—they’re humble, funny and down-to-earth.

When would you say you first became part of the BTS ARMY?

We don’t know… we started to get excited about their presentations, voted on the programs and awards, followed their accounts, supported and tried to spread their work with friends and later on with our fan page.

What’s the wildest thing you’ve done for the band?

Well, in our perspective, it's not crazy, but we've sung songs for fan-made projects, made dance covers of their songs, and we don't sleep in order to see their performances and awards [because of the time difference].

We think comparing BTS with others boy bands is normal. Being compared to other English-speaking groups helps as a reference point for people who are not yet very familiar.

It's cool that BTS is compared to a band as big as One Direction, however, the essences of the two groups are very different. We invite people that just found out about BTS to investigate them and discover their colors.

We think that they are really popular right now due to the millions of tweets and media who talk about them. The fandom is increasing at an incredible rate these days, as well. However, they will have to continue to work hard to become a worldwide-recognized band.