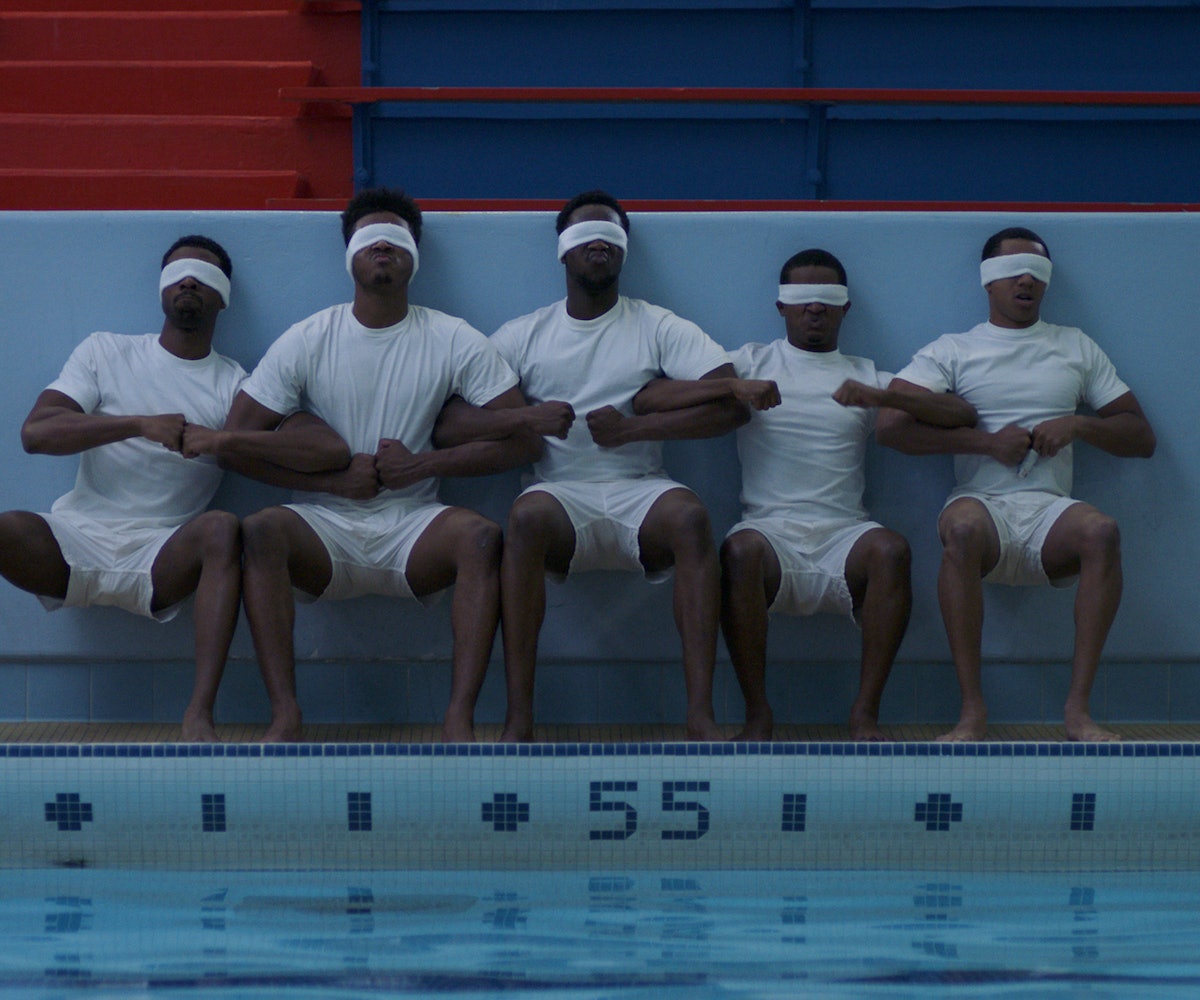 For a certain subset of society, there used to be no purer form of escapist comedy than the fraternity movie. Administrators were the enemy, classes were optional, and the dangers of hazing were either unaddressed or embellished to the point of surreal parody (think the “Cinderblock Test” from Old School), to say nothing of the way that women were often represented.

Frat culture was depicted as a bastion of masculine absurdity; a low-stakes bubble that had only tenuous, insignificant connections to the real world. But over the past five or so years, as fraternity scandals have become routine and troubling headlines, their portrayal has fundamentally changed. The all-male insularity proved to be a breeding ground for some shocking instances of racism and intolerance, not to mention hazing and sexual assault, at some of the country’s most vaunted universities. By no means are all fraternities to blame, but the connection between that kind of ecosystem and many instances of deplorable action became undeniable.

In Burning Sands, Netflix’s new film about hazing in a fraternity at the fictitious HBCU Frederick Douglass University, every single shot and exchange fills you with dread. Each interaction is an opportunity for the pledges, led by charismatic actor-singer Trevor Jackson’s Zurich, to be berated or beaten by the older brothers, including Moonlight’s Trevante Rhodes, whose character Fernander is far more intimidating than Chiron in the film’s third act, who's probably the most compassionate brother in Burning Sands.

Writer-director Gerard McMurray, who produced the similarly tense Fruitvale Station, stressed in an interview with Rotten Tomatoes the fact that his film is set at an HBCU and telling a story about “young black men at a black college and the challenges they go through on the path to manhood." Greek life at HBCUs has been depicted in films from Spike Lee’s School Daze to Stomp the Yard, but rarely in such unflinching fashion or with such an eye toward the nerve-racking day-to-day minutiae of the character’s pledge experience.

McMurray skips straight to hell week, the grueling final stretch before Zurich and his “line brothers” are officially members of the fictional Lambda Phi. McMurray doesn’t do much to explain the rules, allowing the viewer to discover them with the pledges, but also stripping away much of the ritual artifice that typically is used to glorify and mask them. We’re introduced to the world of Burning Sands with Zurich and his brothers doing push-ups in the woods and from there, forced to reckon with the terrible things that the older brothers do to the pledges in a fairly naked, free-of-pretense context. There isn’t a second of romanticizing; the parties are ominous and dimly lit, just another opportunity for the would-be brothers to be embarrassed and reminded of their limbo status. Though Greek life is seen as a far superior alternative to being unaffiliated (Zurich balks at being called a “GDI”), the movie’s claustrophobic tight shots emphasize the constraints and compromise that the characters endure in the name of belonging.

When the pledges call some of the fraternities alumni, make connections, and see the benefits of brotherhood in a wider frame, there’s a slight glimmer of optimism, but it’s later played as a potential dividing point. A character criticizes a well-off, intelligent pledge for not “needing” the connections the fraternity provides the way that many of the rest do. In other scenes, the university’s faculty is cast neither as white knights nor two-dimensional villains, but rather as characters who value both FDU's students and the Greek institutions. And Toya (played by Nafessa Williams), a female student who shares a scene with Zurich that is the closest the film comes to comedy, is initially portrayed as little more than a Lambda Phi groupie but proves to be perhaps the film’s most thoughtful and self-assured player.

The particulars of the black Greek experience and race are obviously central to Burning Sands. One of the film’s most taut scenes comes when a white cop discovers the pledges in the woods practicing for a step show, only to offer a surprising response to their tissue-thin explanation. But, when looked at within the context of other recent fraternity-focused films, it serves as another crucial chapter in the shifting of our pop culture discourse around Greek life.

Family plays a role in Burning Sands (Zurich’s dad dropped out of pledging Lambda Phi, which is part of the reason he’s determined to see the process through), but it’s even more critical in Andrew Neel’s Goat, in which Ben Schnetzer’s Brad arrives at Brookman (it’s unclear whether it’s a college or a university, since academics are so far from a priority) as a freshman. He’s seeking acceptance and a degree of protection following an unprovoked assault by townies the previous summer and winds up in Phi Sig, where his older brother Brett (Nick Jonas) is already royalty.

Fraternity culture in Goat isn’t portrayed as worryingly from the jump as it is in Burning Sands, but the pervasive undertone of violence is cast against the truly random attack that Brad suffered, forcing the audience to look at it for what it is. When Mitch (James Franco), a Class of 2000 alumni and the “craziest motherfucker to come through this school,” swings by the house for a beer before getting back to his wife and newborn kid, there’s nothing nostalgic or endearing about it, particularly when he pulls off his shirt and demands that Brad punch him in the stomach.

Where Burning Sands operated in an inky, muted color palette that created a lingering sense of surprise and menace, much of the hazing in Goat is brightly lit. It’s similarly jarring but creates that effect through opposite means. Here, there’s no veil of secrecy, and Brad isn’t even safe in his dorm room.

The movie questions the year-to-year escalations of hazing, as well as how far these impressionable freshmen are willing to go to belong.  It’s a far more isolated movie than Burning Sands in the sense that Franco plays one of the film’s only nominal adults, if you could even call him that. Still, it casts its ritualistic violence against real-world violence, gradually ratcheting up the tension in every scene, even though some of its imagery and shots are heavy-handed as it races to wrap things up.

Goat and Burning Sands are both small budget indies, but even movies about fraternities that are aiming for commercial success have grown more thoughtful.

Neighbors, the Seth Rogen-Zac Efron buddy comedy from 2014, seems on the surface like the antithesis of Burning Sands and Goat, but while the hazing is largely played for laughs and the film borrows from the escalating hijinks of an Old School or Animal House, it is more enlightened than it seems on the surface.

While the antics of Efron’s Delta Psi Beta are humorous, they never happen in a vacuum. As 30-something new parents, Rogen and Rose Byrne act as the audience conduit, not any of the fraternity members. Though often hilarious, the Delta Psi antics have meaningful consequences, and the film shows a keen awareness for the finiteness of the fraternity experience, culminating in a humorous, yet oddly poignant final scene with Efron working as a shirtless model at an Abercrombie & Fitch.

Neighbors, and its gender-flipped sequel Neighbors 2: Sorority Rising, are light works compared to their more gripping, dramatic counterparts, but the two films are still proof that the conscience-free fraternity film is a clear relic of a bygone era, with the occasional low-budget, ill-conceived straight-to-stream picture occasionally slipping through the cracks. If even the studio comedies are willing to explore the problematic nature and constraining artificiality of Greek life, then it’s clear the industry as a whole has experienced a significant shift.

Maybe, eventually, someone will be able to make a commercially viable frat comedy that skirts the harsher implications of Greek life, but it certainly seems unlikely. Part of this recent change is enabled by the current cinematic climate, where movies don’t need to strive for ticket sales. Goat made $23,020 in its theatrical run but is available on most streaming and rental outlets, and Burning Sands was acquired by Netflix as one of a number of Sundance films the studio picked up. Ten years ago, these films would have struggled to find an audience, but both the tone of media conversations around Greek life and the nature of how people watch movies has changed to give them both a platform.

Gone are the days of direct-to-DVD, low-budget frat mayhem glorification, and if films like Burning Sands and Goat steer a bit too formulaic (the latter especially), they’re important time capsules of a time period where we’re calling into question the role and relevance of one of America’s strangest and, at times, most dangerous institutions.