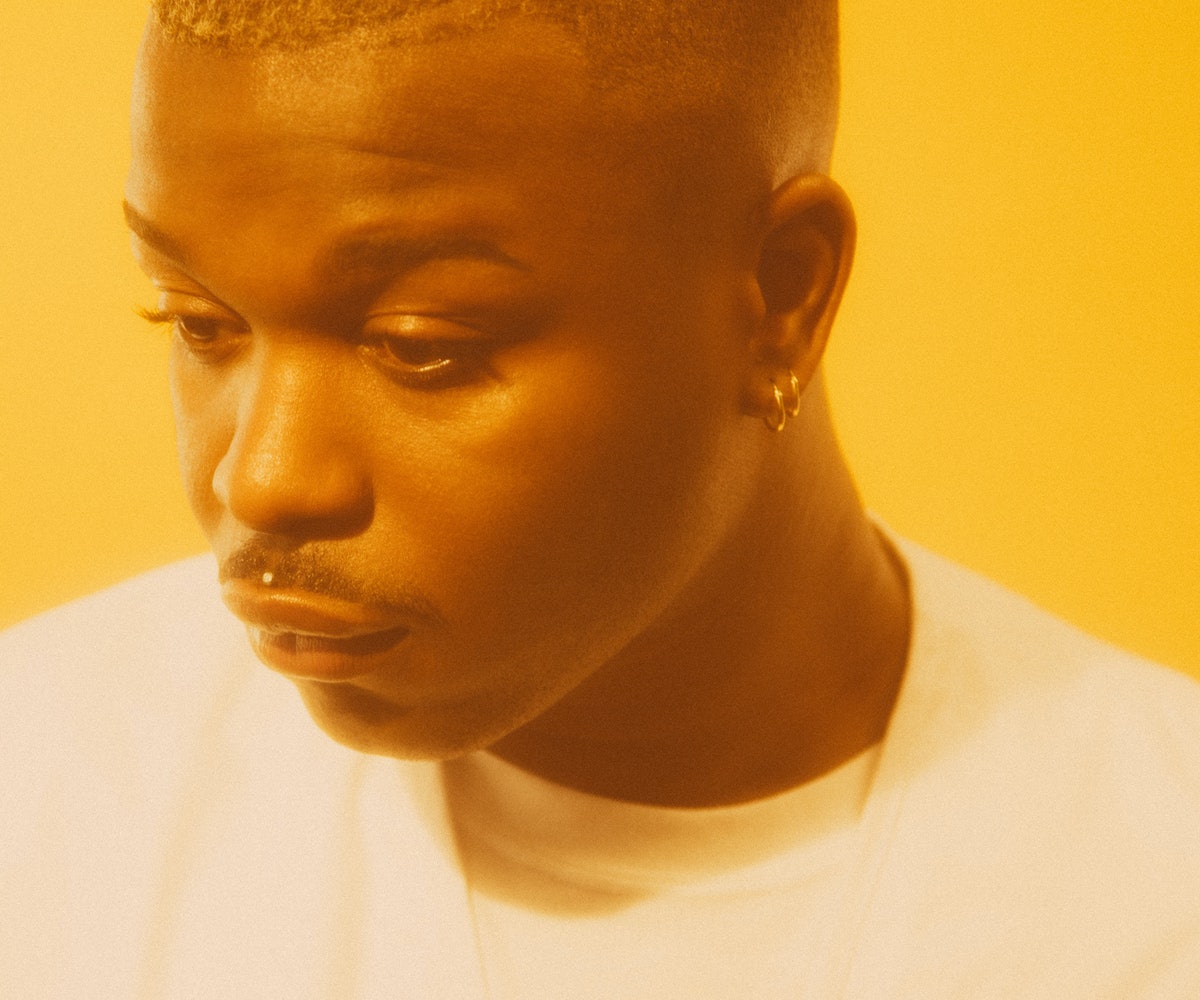 In his Brooklyn apartment on a Monday afternoon, Cakes Da Killa, born Rashard Bradshaw, is sipping 1800 Tequila. “I drink anything that’s wet, but I just did a show with Peaches in D.C. and stole it out the club,” says the rapper of how he acquired the bottle. He adjusts his outfit as he speaks—an all-gray number by Sir New York, for whom he modeled during New York Fashion Week. (“It was cute,” he recalls of the experience. “BBWs out here doing fashion shows.”)

Like many artists from New Jersey, Cakes has made New York his home, having lived in the city for the past four years. An enviable lyricist, he studied journalism at Montclair State University and found his voice as a rapper by blending his innate writing skills with a commanding ability to spit verses, discovered while entertaining his friends. “I was bored in my dorm room, and thought it would be fun just to upload a music video of me rapping for my friends to giggle,” he explains. The videos made their way onto industry desktops and he’s been in the studio ever since. “It was never a mental switch, which is why for so long I was not really a rapper,” he says. “I was a writer that’s just performing. When you’re gay and a little boy it’s all about being a writer, an artist, or an actor, so that’s what rap is all about [for me]—the performance of lyrics.”

On his vicious debut, Hedonism, released October 21, Cakes offsets the quick-paced, unapologetic sexual lyricism found on his previous EPs with a more mainstream appeal. “This is me trying to find a balance between being raw and exposed, the shit that I did in the past, and the fans living for the vulgarity, but also being like, ‘I think Ariana Grande could sing this song!’” he says. Throughout the album, Cakes delivers bars with a force that is unfortunately usually attributed to male, heteronormative artists. “Talkin Greezy” is a clear example; it’s the fiery first single that spits in the face of anyone who has slept on him. Modern masculinity meets tender descriptions of oral sex on “Tru Luv,” and on “Up Out My Face,” featuring partner-in-crime Peaches, Cakes warns that he’s not one to fuck with. “Finally I get it,” says Cakes. “I am attractive, I am beautiful, I am talented. I am independent and I know what I want. I know that you want me and I’m going to get what I want from you and you are going to get what you need.”

Though titled Hedonism, the album is less about chemicals and orgies and more a depiction of the radical act of being staunchly self-confident. Partly inspired by Cakes’s turbulent dating life and ultimate departure from his first monogamous relationship, he penned the record during a transformative time between age 24 and 25. “I hate group projects. I hate anything that doesn’t involve enough attention to me, but I was willing to make those compromises, and when that relationship came to an end I had to completely fall back in love with myself,” he explains. “I’m on my grown woman shit, basically. I was doing everything I wanted to and feeling like I’m the shit. It’s not about me doing hedonistic things, it’s more like people enjoying me and me getting pleasure off that.”

As an openly gay rapper, Cakes manages to balance the progressiveness of slaying boundaries and representing a marginalized community while avoiding inevitable typecasting. “You want to be someone who opens the door for other openly gay artists to feel comfortable with themselves, but the media will make it seem like you can only do Pride events,” he says. “We do these things for the visibility, but we also want to be taken seriously on all platforms.”

America has seen great gains for the LGBTQ community, such as the legalization of same-sex marriage, the Equal Employment Opportunity Commission’s acknowledgment of sexual orientation discrimination in the workplace, and the lifting of the military’s ban on transgender soldiers. With 2016 set to be the deadliest year on record for trans murders, however, society has significant work to do to protect all of those represented in the initialism. “I just read that the supply of estrogen for trans women is low,” says Cakes. “That’s not pushed to the forefront [of] the gay agenda. I hate that phrase. Whatever people assume is the ‘gay agenda’ is just gay white males.” He pauses to sip his drink. “They’re at the front of the lunch line; I’m just in the back having a tequila.”

NEXT UP
Entertainment
Fans Spot Taylor Swift Wearing Sadie Sink's "All Too Well" Sweater
Entertainment
Paramore Announces Album 'This Is Why' For February 2023
Entertainment
Soccer Mommy, Wet Leg, & 48 More Artists Made An Album For Abortion Rights
Beauty
The Most Viral TikTok Beauty Products of 2022