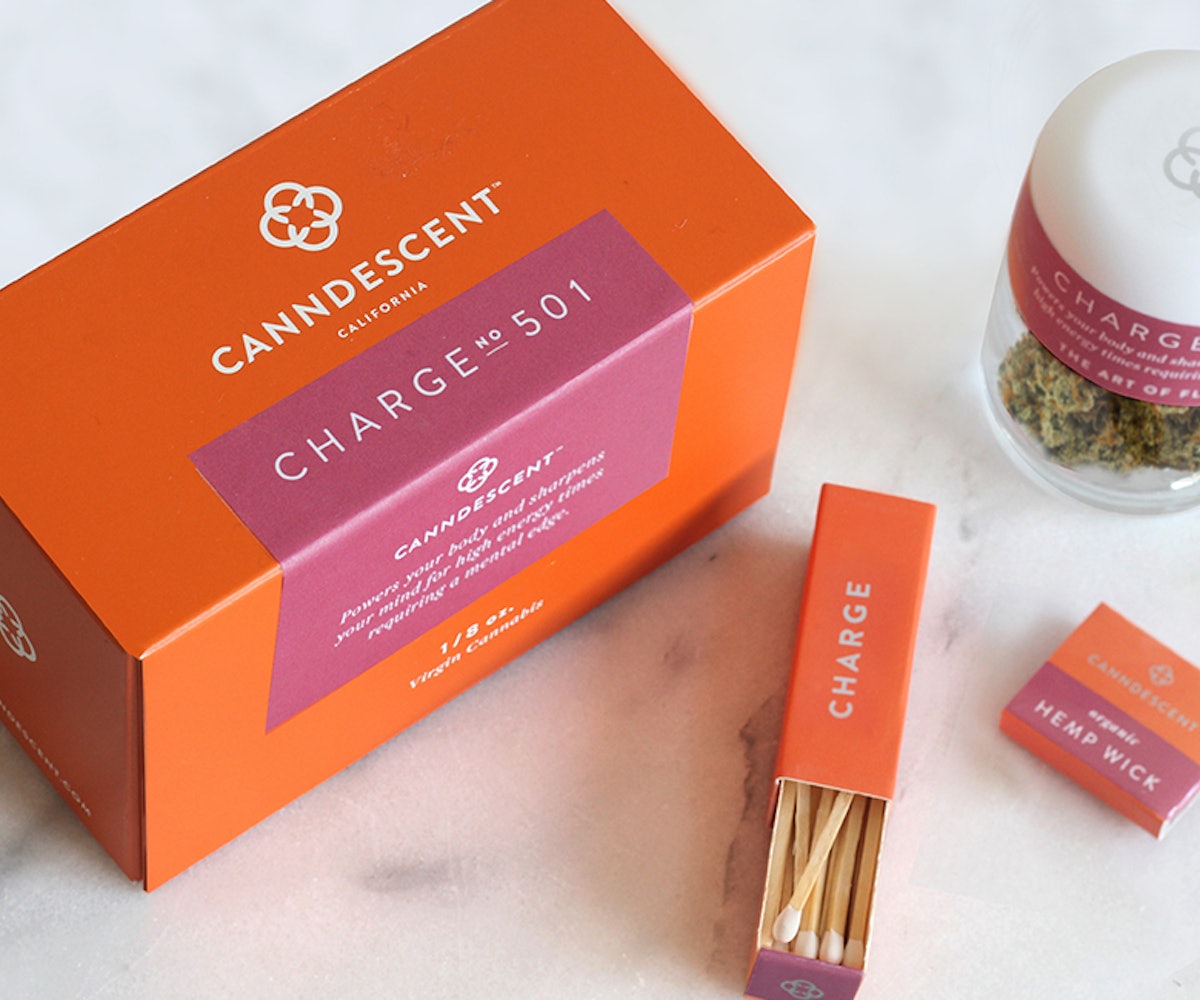 Weed culture can be so confusing that it's easy to skip the puffing and go straight to the pass. Even though cannabis is more mainstream than ever, its various nuances and technicalities have a pretty high barrier to entry. Unlike with alcohol (think of how easy it is to order a glass of mid-tier Shiraz at happy hour), knowing—or seeming like you know—about weed is hard, and that can be intimidating. It's impossible to expect that weed newbies and the canna-curious would know right away the dramatic difference between Gorilla Glue and Green Crack (night and day, respectively). But all hope is not lost: Canndescent wants to make it easier for weed neophytes and aficionados to talk on the same level.

The company, founded in 2016, sells flower—but you'll never know the exact strain. Each ⅛-oz. jar sports a sticker, marked by one of the brands five set effects: Charge, Connect, Cruise, Calm, and Create. Effects are meant to answer the question, “How do I want to feel?" Instead of getting mixed up with jargon like terpenes, trichomes, and various cannabinoids (remember, the two major ones are THC and CBD, the first of which has psychoactive properties; the latter does not), Canndescent differentiates green by general effects and, from there, either sells in a jar or pre-rolled joint.

The five effects—always pesticide- and microbial-free—all taste and feel unique. Charge is designed to hit before the gym or going out dancing; Connect is giggly—great for kicking it with pals or a ~special friend~ in ~the bedroom~; gear up for a chilled-out day of productivity with Cruise; Calm rules for unwinding or passing out (peacefully); finally, Create helps stir artistic inspiration. Each effect is described with easy-to-understand up-and-down arrow visuals for both body and head reactions. Charge has two up arrows; Connect lifts the body but leaves the head neutral; Cruise has a body high but brings the head down (i.e., to a peaceful, rather than “down" or depressed, space); Calm drops both the body and head; and Create relaxes the body while lifting the head. It is fairly intuitive, demystifying what can seem like a totally opaque balance of nuances.

“Because we were well-resourced, we were willing to do whatever it took to gain the trust of the city," he says. “They're looking at it in terms of long-term [success]. We wanted to be there for them to make sure we did it right, and then whatever we did, [the city] would feel comfortable knowing they could translate that into any other new operators that were coming onboard."

After all, the company is considered one of the pioneers in the city of Desert Hot Springs—it had an inherent responsibility to trail-blaze for other, future cannabis businesses. Although off the beaten path, Desert Hot Springs, Pecache says, was an obvious choice; it was the first city in Southern California to legalize large-scale medical cannabis cultivation and, well, land was cheap, due to a number of city bankruptcies in a short period of time. (Actually, the repeat bankruptcies was part of what got city officials interested in developing a cannabis industry.)

“When we built out this facility, not only did we spend a lot more money than your traditional grower would have spent, but we did it knowing that, one, we needed to develop that relationship with the city," Pecache says. “Two, we wanted to make sure we satisfied all the requirements, whether it was fire, police, administrative, because they were new to the game too." The armed guards, among other measures, were simply protocol.

And, come the passing of California's cannabis adult use law earlier this year and the associated green rush, Canndescent has been able to hit the ground running.

“I mean, it was just an easier transition for us to move into the adult-use market, right?" Pechache says. “Because we were already operating in a legalized space in terms of the municipality of Desert Hot Springs. It basically fast-tracked us into getting state licensed to operate under the state adult cultivation license."

Although a number of Canndescent business operations—including “executive, finance, HR, branding, marketing, PR, and our sales force team," Pecache says—happen at a different office in Santa Barbara, all the actual growing and packaging goes down in the desert.

Desert Hot Springs operations includes eight grow rooms, all with highly regulated temperature, humidity, water oxygen levels, and various readings of something called rockwool, which is a mineral wool used for hydroponic growth (Canndescent doesn't grow in soil). And there are also heaps of employees, contributing to that Canndescent lifestyle.

Because: Canndescent is big on branding. Not only does Pecache wear tennis shoes with toasty Canndescent orange details (the hue also appears across all other packaging and promotional materials), employees working in the joint-rolling room (a real place) don the same color gloves. Back in that same joint-rolling room, stuffers (my name, not Canndescent's) sit in fairly snug quarters, systematically shredding, shaking, stuffing, and rolling elegant fatties. There's no windows, but a stuffer I spoke to seemed upbeat. When I asked her about the job's potentially meditative quality, she seemed to get it, replying, “As long as you have your system and know what you're doing... [Just] have your product pre-shredded, get [cones] loaded, and you can just keep giving them out."

Shredders are like The Hulk versions of the grinder you have at home, pulverizing five pounds of herb in just three seconds. From there, stuffers use what look like old-timey gold-sifter screens to separate the herb (kief—the super sticky dust that packs a higher punch of cannabinoids—is obviously coveted, but nothing goes to waste). It's a very streamlined process—as are most of Canndescent's operations, from what I could tell during the visit. It's kind of refreshing—how Canndescent does all the nerd work to bring consumers a non-pretentious, accessible way to consume cannabis.

But: How is the actual product? My companion (who smokes weed daily and has for years), Rodney, and I (same)—who Canndescent generously put up in the nearby Palm Springs area—taste-tested all five effects in the name of journalism.

Charge No. 515 (the number refers to an internal system Canndescent uses to sort different yields and strains) initially tasted like black pepper—slightly spicy with round edges—but from there, in my and my companion's experience, it felt a little scratchy, like a cup of strong, but low quality coffee. “It really starts so nice and goes so south," Rodney said.

Connect No. 407 was by far the smoothest and our favorite of the batch, even containing properties to spike users' sex drives. (Though, no, Rodney and I didn't bone. Sorry). The flower burns—well, like a flower. Warm, but not saccharine. It's floral without venturing into perfume-y territory, and it does a great job at relaxing the body. (Though it should be noted the dry mouth effect was pretty immediate for both of us—not exactly ideal for, uh, certain sex things. However, keep in mind specific strains Canndescent rolls with vary; another user's review called Connect “mouthwatering," so who knows!)

The effects of Calm No. 101 are immediate. It had a settling, silky taste from the jump. I split a joint of it with Rodney late into our first Palm Springs evening and we pretty shortly thereafter retired for cartoons and minimal brain activity.

Cruise No. 15 had a light, even flavor, on the verge of citrusy. It's essentially the Corona of weed, good to puff on—frequently—throughout daylight hours without zooming off into outer space.

Create No. 315 was another favorite of ours, unfurling shoulder muscles while sparking imagination without veering into heady or paranoid territory. It tasted piney—like a really dank IPA.

One potential hurdle with Canndescent, however, is establishing product consistency so early in its existence. Pecache says the eventual company goal is to select one—albeit secret—strain to forever rep each of the effects. He adds that Canndescent users aren't the stereotypical burnt-out stoners perpetuated pop culture up until recently—its users have packed schedules and, as such, they want strains that won't get them too high.

Here's the thing—and it's not Bad, but it is The Thing: Most of the Canndescent green I burned did get me very high. Granted, although I'm a daily smoker, I live in Georgia, a fully illegal state—which means when I buy what someone calls “OG Kush," I have to decide to trust if it's legit or just not make the purchase. Not only do I not always know what I'm smoking, it's safe to assume the herb is probably not as strong as that which is available in states like California, which has full adult-use cannabis laws in effect. So I asked Rodney, who lives in Los Angeles—a wonderland playground of this recent green rush—his take:

That's not to say every strain Canndescent will ever offer (and those they eventually settle on) will be such sock-knockers. And like all types of cannabis—strains, ingestion method, etc.—experiences forever vary by the specific user. As always, you should sample cannabis with caution and keep an eye on how different strains affect you (Goldleaf sells a handy journal for keeping track of various elements of individual experiences), then move forward from there with what works for you in assorted situations.

Still, Canndescent is tapping into a major market: Those who want to use cannabis but don't wanna get too nerdy about it. Just as someone may always default to ordering a familiarly named Malbec while dining out because they know they dig that flavor and how it makes them feel, perhaps a consumer may always opt for Canndescent's Cruise, since they have an idea of the general taste and effect. It separates cannabis culture newbies from those who live glued to a bean bag all day doing bong rips, as well as from smokers who have an encyclopedic knowledge of the plant. Lowering that barrier to entry, means even more people can enjoy a toke or two, much like in the way more and more people can take part in wine culture—and, frankly, that is a revolution, one we're happy is finally here.