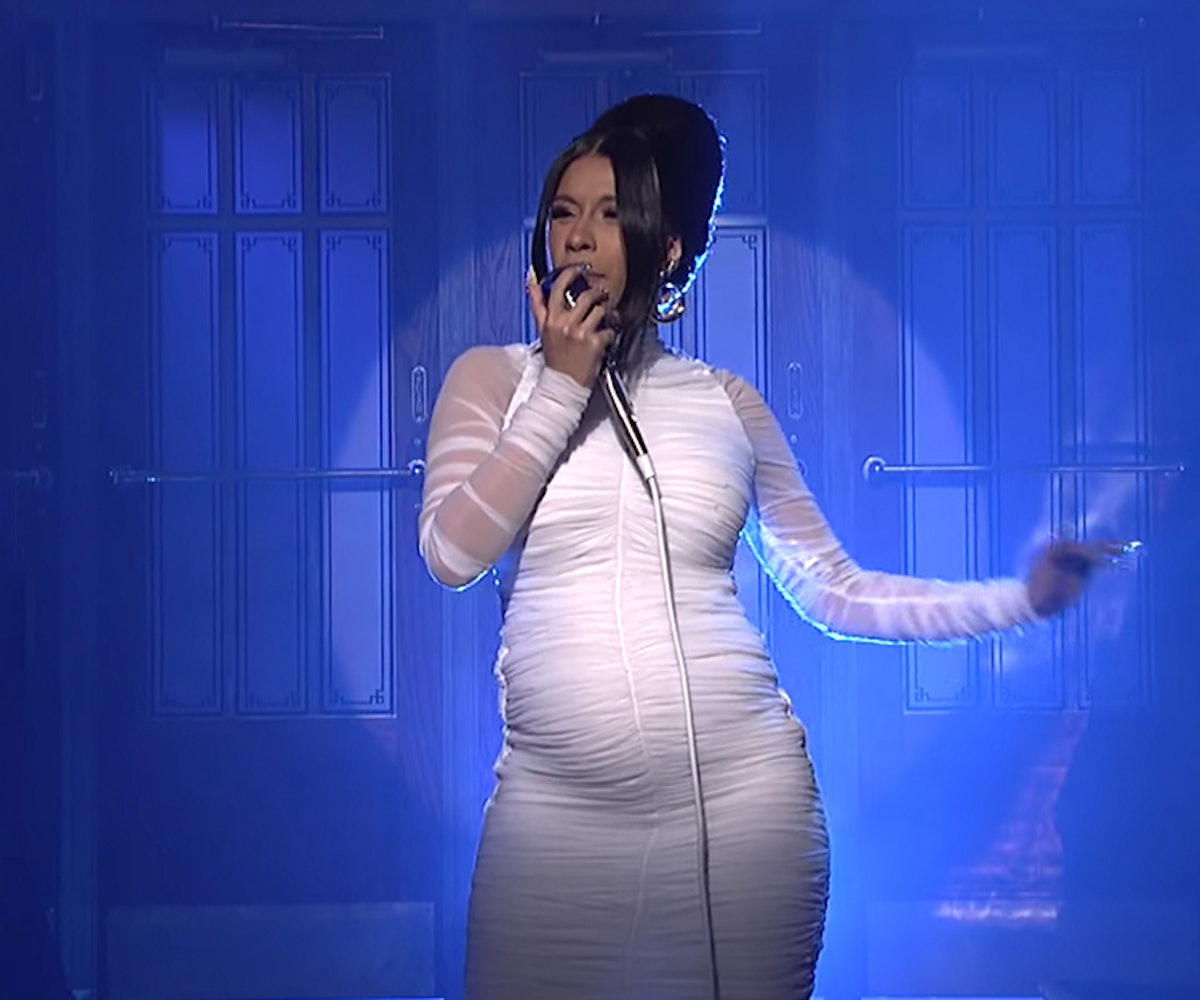 When Cardi B ended months of tabloid speculation by revealing during her debut SNL performance that she was, as rumored, pregnant with her first child, she accomplished two things simultaneously: She deftly demonstrated what the pregnant body can do and—more significantly—she introduced a new paradigm through which we can view how celebrity women, and specifically black celebrity women, perform their pregnancies in public.

Pregnancy for black women has always meant contending with unwarranted levels of public scrutiny. Harmful stereotypes about black women’s fitness to raise their own children have led to policies that criminalize the common mistakes of new moms, regardless of race or income level, and justify removing children from their care. And then, for all celebrity women, pregnancy has increasingly required a very public performance of motherhood and nurturing. Any hint of dissatisfaction with the difficulties their bodies endure to bring new life into the world is often met with criticism and accusations of ungratefulness.

It’s unsurprising then that when you combine the two, the invasive surveillance of black celebrity mothers’ choices reaches critical mass. Perhaps because of this, black celebrity women have recently started taking active control over how their pregnant bodies are seen in public by crafting specific narratives that center both their motherhood and their blackness. What makes Cardi B’s newly revealed pregnancy so notable is that she has intentionally deviated—and quite heavily at that—from the accepted and expected narratives of how black pregnant women should relate to their bodies in public spaces.

In "Get Up 10," the opening track of her debut album Invasion of Privacy, Cardi B raps about how far her career has come in a few short years. In "Bickenhead," she opens with a proclamation that the track “goes for all my nasty hoes.” In "I Like It," she lists the fancy things that meet her taste, and in "I Do," she raps about being a bad bitch and being so good in bed that she says her own name during sex. Throughout the album, Cardi discusses her rise from financial struggle to becoming a millionaire and reminds listeners that being herself is what vaulted her to fame. Her lyrics make it clear she doesn’t regret her past in any way and that stripping gave her the freedom to earn the money she needed to support herself and her family. The album is, in a way, fairly standard fare for a wildly popular debut female rapper, but the lyrical content takes on a whole new dimension when you realize that Cardi must have recorded some or all of it while pregnant.

Despite the fact that women are usually expected to become (or at least present as) more demure and understated as they begin to show, Cardi B has remained steadfast in her established public persona as an ex-stripper focused on “money moves” and all the best “thot wear” from Fashion Nova. She had continued to embody everything society has decided black women—but especially black mothers—shouldn’t be. By defiantly remaining exactly as she always has been, Cardi telegraphs one of her essential mission statements: “I make money moves.” A pregnancy shouldn’t get in the way of her hustle, and she doesn’t intend to let it. Whereas black women are usually told that their pregnant bodies and the babies they will soon have will prevent them from achieving greatness, Cardi has proven that her pregnancy is a motivation for success rather than a hindrance to it.

What’s perhaps most transgressive, though, is Cardi’s focus on her own sexual prowess. Braggadocio and sexual innuendo are hardly new territory for female rappers, but, by debuting this album in the middle of her pregnancy and performing the tracks in her signature provocative stagewear, Cardi forces her fans to consider her pregnant body as a site of active and ongoing sexuality, in stark contrast to the way pregnant women are aggressively desexualized in society.

The pregnant body was also profoundly contradictory: as scholar Jane Ussher explains, pregnancy is, at its most essential, the most vivid proof of women’s sexuality — which is precisely why representations of mothers took on the opposite characteristics. The most significant mother of Christianity, for example, is the Virgin Mary: asexual, idealized, immaculate. Mary is rarely represented while actually pregnant, only afterwards, when the child is safely born, both mother and child clean and content. This beatific mother is contained, pure — the antidote to the abjectly pregnant mother.

By and large, it is this sexless depiction that celebrity mothers most often lean into. It is a frame for the story of their body, and it works. As Petersen notes in the same piece, “pregnancy and motherhood are one of the primary ways in which a female celebrity maintains attention.” For black women, this creates an additional complication: How do they participate in the performance of pregnancy while sidestepping all of the ugly racialized baggage that attaches itself to their protruding bellies?

For some women, like Chimamanda Ngozie Adichie, solving this equation means refusing to perform entirely. In 2016, Adichie casually revealed in an interview that she had recently given birth and withheld information about it from the public in order to evade any such performance. “I just feel like we live in an age when women are supposed to perform pregnancy. We don’t expect fathers to perform fatherhood.”

For others, effusive depictions of tenderness become a way to shield against accusations of negligence or conceit. On February 1, 2017, Beyoncé posted an intricately staged photo of herself on Instagram announcing her pregnancy and forthcoming twins. Eleven days later, she performed on the Grammys stage in golden regalia that evoked naturalistic depictions of the Virgin Mother, a theme that carried throughout her pregnancy. Many criticized the iconography she chose to utilize, considering it blasphemous. But Beyoncé’s intentional self-deification can only be seen as a calculated response to the criticism and conspiracy theories she was subjected to during her first pregnancy with daughter Blue Ivy Carter. By centering her baby bump, she was reinforcing her right to occupy space in the realm of motherhood.

For Serena Williams, the problem was twofold. As a muscular and dark-skinned athlete, her body has been the site of dehumanizing and de-feminizing discourse for a significant part of her career. After revealing her pregnancy to the public (and winning the Australian Open), she also opted to pose nude for the cover of Vanity Fair for which she was criticized in The Washington Post by fashion critic Robin Givhan. Calling it a “strange celebrity ritual” and a “complicated stew of personal indulgence” Givhan tried to make the case that, essentially, Serena’s pregnancy was not “meaningful in some uniquely grand and sweeping way.” But by posing nude on the cover of a magazine, Serena was able to reinforce not just her blackness and her pregnancy, but her femininity, something that had been denied to her for as long as she had been in the public eye. Where Beyoncé simply had to fight to make space for herself as a mother, Serena also had to fight to make space for herself as a woman.

Like Serena, Cardi B debunks the myth of fragility that follows pregnant women by more or less continuing to go about her business. In the span of a week, Cardi has dropped her album, performed on Saturday Night Live, was profiled in GQ, co-hosted The Tonight Show with Jimmy Fallon, appeared on TRL, and gave an interview on Hot 97's Ebro in the Morning that hit back at the sentiment that her baby would hold her back professionally. She has work to do and commitments to meet—including an upcoming headlining appearance at Coachella—and nothing about a baby bump prevents her from rapping. The very public concern trolling and speculation about her baby and her fiancé belies a misguided paternalism that black mothers are always subjected to, regardless of their levels of individual success and financial stability. But, as Cardi succinctly put it in her interview with Ebro, "I'm 25 years old. And I'mma say this in the most humblest way: I'm a millionaire.” The idea that a woman who has enjoyed a well-deserved meteoric rise in under a year on the strength of her own hustle would be anything less than perfectly fine is ludicrous.

Through her music, her dress, and her words, Cardi rejects attempts to frame her pregnant body as less capable in any way, and instead uses her pregnancy to reaffirm her established persona as a “regular degular shmegular girl from the Bronx.” Her actions present an alternative path for black women who are pregnant in the public eye by showing that the white ideal of purity, innocence, and asexuality need not be the way they perceive or present their bodies. As Ira Madison III writes in GQ, “Try as you might to levy a gaze of respectability politics on her, Cardi B defies your gaze. The irony in titling her debut Invasion of Privacy is that she controls everything the eyes of prospective voyeurs might see.”

As her well-executed promotional tour has demonstrated, Cardi is savvy about her career and more than capable of continuing to leverage her popularity into a long-lasting career. As the oft-referenced Beyoncé might say, she is “strong enough to bear the children/ Then get back to business.”