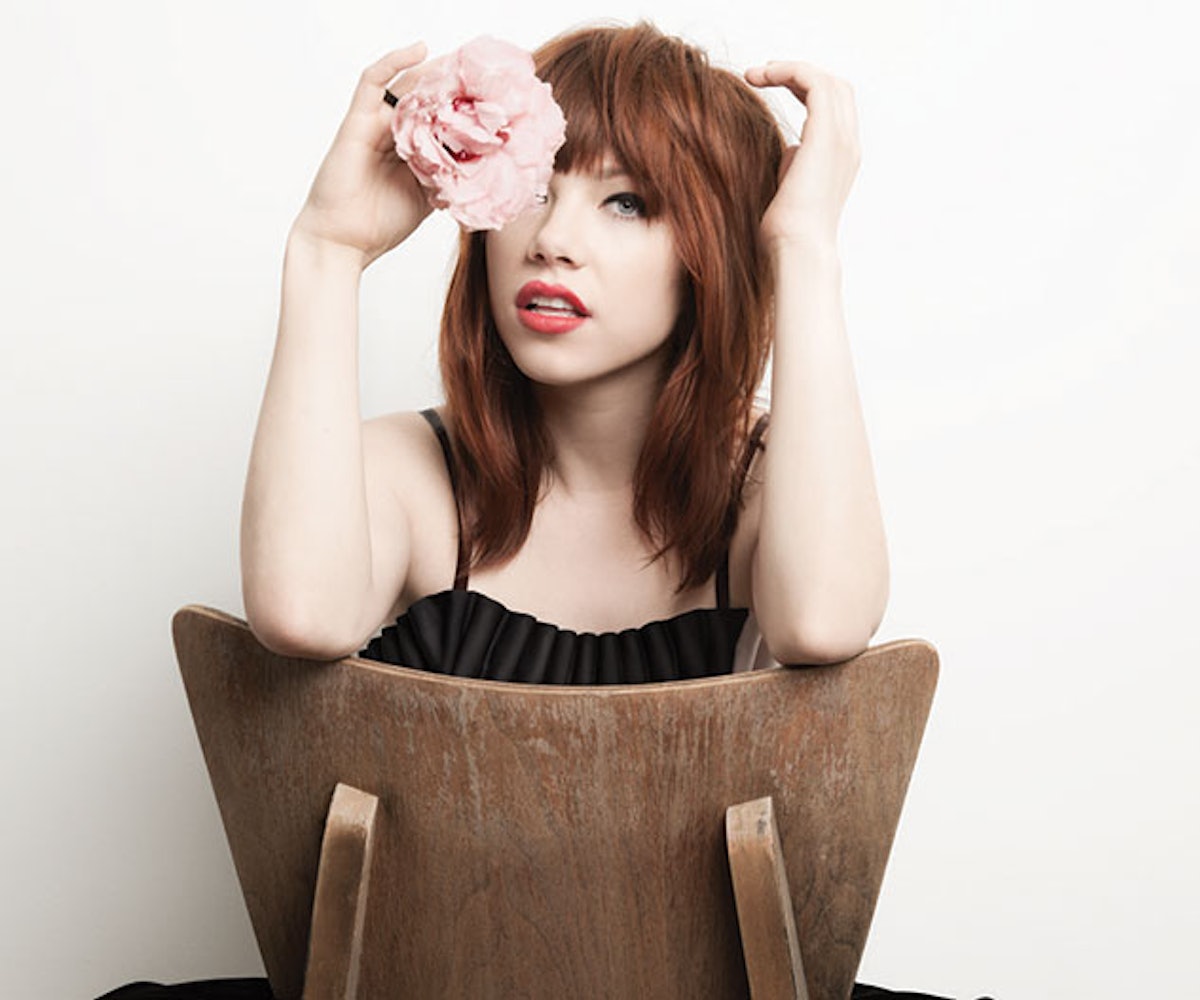 While the other reigning pop darlings duked it out over Twitter, Carly Rae Jepsen has been quietly making the best pop music the past few years have heard. Her third album E•MO•TION, out now, is one of the year's best. It's perfect pop music: Blissful, tongue-in-cheek takes on universal themes (the Big L, in Jepsen's case) that's sugary without being saccharine. From the echoing saxophone that kicks off the album's first track "Run Away With Me," Jepsen is relentless in her pop convictions. It's an album rich with youthful-toying-with-adulthood longing her peers can only hope to capture on such a universal level. It's no wonder some of today's best and progressive names appear in the project's credits.

Thanks to collaborations with Sia, Devonté Hynes, Tegan and Sara, Rostam Batmanglij, and Ariel Rechtshaid, E•MO•TION puts Jepsen an echelon of her own, above the petty tabloid drama and its respective cookie-cutter projects. There is not one song on E•MO•TION that you could imagine sounding any different from what it is. She understands what it takes to make a genuinely good pop song; a song that's catchy without being earwormy. On the contrary, Jepsen's pop is the kind of pop you welcome returning to and listening to on repeat…maybe. The innocence she taps in to is filled with nostalgia. We've all thought, I really, really, really, really, really, really like you at some point in our lives. We've all had that one romance that's had us think, Hey, maybe I am capable of this feelings thing. (And if you haven't, well, brace yourself.) The difference with Jepsen is she makes inanely honest music about it. And E•MO•TION is her magnum opus (so far). Carly Rae Jepsen is the pop star we need, but don't necessarily deserve.

Hear us (and her) out in the pages ahead.

When Kiss was done, what was going through your mind? Did you already have an idea of what you wanted your next album to be?

Oh, I don’t think I knew what I wanted the next album to be. I just remember feeling like I was on cloud nine. I had just moved to L.A. and at the time, a song of mine had broken out in Canada. We didn’t have a ton of time to make that album, actually. It was a challenge, but at the same time it was a really exciting challenge. I had a bunch of songs that I had written in Canada that were in my back pocket if I didn’t end up writing stuff I loved. So it wasn’t a terribly high pressure thing. I ended up meeting many amazing writers in L.A., loving the new material, and feeling proud of what we landed with. It took me some time before I had a vision of what I wanted to do with this album. I found that vision by writing a lot. I waited until things started to feel really right.

I feel like you’re a person that just writes constantly—like it’s an innate thing for you. Therapeutic, even.

Writing has been a huge part of me since probably...I don’t know. I don’t know what it is that draws you to your own passion, but for me, the first time I ever wrote a song was the most confident that I had ever felt. It was the most, I don’t know, the most me I’ve ever felt and I got quite a rush from that. You’re right about it being therapy. Even with this album done, I’ve been writing songs with my guitarist on the road and we both kind of look at each other like, What are we writing this for? It’s going to be a long time before the next one, but we cant quite help it.

That’s great. I’ve read many interviews that say you experimented with this album. I’m curious to know how much experimentation you actually did—like, did you ever veer into the hip-hop spectrum and say Mmm maybe not?

[Laughs] Should I become a rapper?

You know, I think that part of figuring out what I wanted to do was just trying a lot of things and working with incredible people. I reached out to people who I was big fans of just to see if we could work try together. My experimentation was a really natural thing. I wrote without any restrictions on what I was making. I think “Emotion” was the first song that really stood out to me. I was excited by the ‘80s influence. It wasn’t long before the album was complete after that.

I read somewhere that there was a folk-ier album in the works before the ‘80s turn. Is that true?

Yeah. I grew up on folk music so there were a few songs that were a little more alternative. I don’t know if they were necessarily folk songs, but I would say that there were songs that I needed to get out of my system before I was ready to write this album. There are some songs out there actually that didn’t quite fit cohesively with what I was making but are still near and dear to my heart.

Sounds like there’s a B-sides waiting to happen. What was it like working with Sia? You and her are pop powerhouses. Both songs feel like a true meeting of the minds.

She’s incredible and I felt very lucky that she gave her time and energy to my project. She’s somebody I’ve looked up to for years. I remember actually bar-tending at the Media Club where she came to play a live show in Canada and asking my manager to work a little bit of an extra shift just so I could catch her set. Fast forward to four years down the line and we start to share ideas. It’s so surreal to me.

What lessons did you take from Kiss and apply to E•MO•TION?

Kiss was a wonderful challenge. I honestly got off making an album in such a short period of time. There wasn’t the luxury of experimentation like I had with E•MO•TION. My mission statement was (and is) that I was going to take my time with this album, and that I wasn’t going to let any sort of deadlines pressure me and feel like they were more important than the work being right. Having done both ways of album making, I have to say really love this way. I love being able to take my time and let inspiration hit naturally.

Totally. This whole album, from beginning till end, is full of singles but its also a massive album. It’s almost like you flipped the script of Kiss: like, here is this big, epic sound that’s lush and dense. Did you feel like you had to prove yourself after “Call Me Maybe”?

There’s a little truth to that, but it wasn’t necessarily that I was out there to prove myself. I knew that in my heart that I had more songs than just that one. It took forever because each track was treated like a single.

Lyric-wise, it feels like you’re more open about everything. It’s less PG-13 and a little more adult. “L.A. Hallucinations” is a great example of this. Did you feel like it was time to, you know, mature in your songwriting?

You know, when I played a few of these songs for a friend of mine and his girlfriend, the first thing they said was, “Carly, there’s like a little sexual thread to this thing” and I agree; there is. The goal for this album was to allow myself to go a little deeper and have an album that was something that could cater to older audiences, as well as younger ones.

I’m not too sure how autobiographical everything is, but I’m curious to know what lessons from past relationships have taught you.

One of the main things I’ve learned is that it’s valuable to get that one-on-one time together: where there isn’t much chaos going on to really get to know somebody. It’s easy to fall in love for the weekend. “Run Away With Me” is pretty much a song about erasing that concept of just having those two days of pure ecstasy. It’s an amazing feeling and I’m glad that we were able to find a way to put it into music, but it isn’t necessarily the reality for a long-term thing. I think that’s the thing that, I don’t know, even a song like “Warm Blood” gets into that desire for more intimacy and for realness.

Speaking of “Warm Blood,” my next question dealt with your mix of indie and pop. Songs like that and “Gimmie Love” progress the idea of what pop can be today. I’m curious to know what you think pop is right now.

Oh, that’s tough. I get off on a great pop song when the melodies are tight, different, and they hook you and draw you in right away. At the same time, I get off on music that you want to vibe to. The challenge for me was creating a love affair between those genres and really finding a way to scratch those two itches.

Would you say that this album is considered your passion, is this your passion project up until this point?

Yes. I felt like a lost puppy when it wrapped. Like, what does one do when they don’t write songs every single day?

You tell me. Let's riff off of the album title; what is your favorite emotion?

I think probably joy. When I was a little girl, my mother told me the word that described me best was “joy.” I’ve always loved that. I know mothers always say the cheesiest things, but for some reason I’ve kind of been on a mission to capture that my whole life. I wanted this album to have a sense joy throughout it. It’s a bright album. It’s got dark moments, for sure, but all in all, I hope that it makes you feel good.

That’s the marker of a great pop album, really. A great pop album has dark elements, but showcases them in a way you can still dance to and celebrate…Is there any emotion that scares you?

Insecurity is a terrifying emotion because it can stop you from doing great things. Whenever I’ve had a big decision in my life—even the decision to do Cinderella on Broadway—all these questions of Well should I do it? I don’t know flood my head. But at the end of the day, I wanted to and it has all been a challenge that I’ve been excited for. If I had let those insecurities speak too loudly, I may have said no to some of the greatest experiences in my life. That’s something everybody battles; the trick is you can’t listen to that voice too much.

How has your life been different than how you had planned?

I always hoped that I’d be able to have a life where music was the main part of it. I think I was also very realistic with just how crazy of a dream it was to be a singer, being able to make that a career. I had many different ideas of what that could look like for me and in all honesty, I think my parents would be the first to tell you that I’d be content playing in a lounge bar at a hotel if it meant that I could sing. The fact I am getting to do this in such a crazy way. Part of what keeps me going is that I just feel so very grateful.