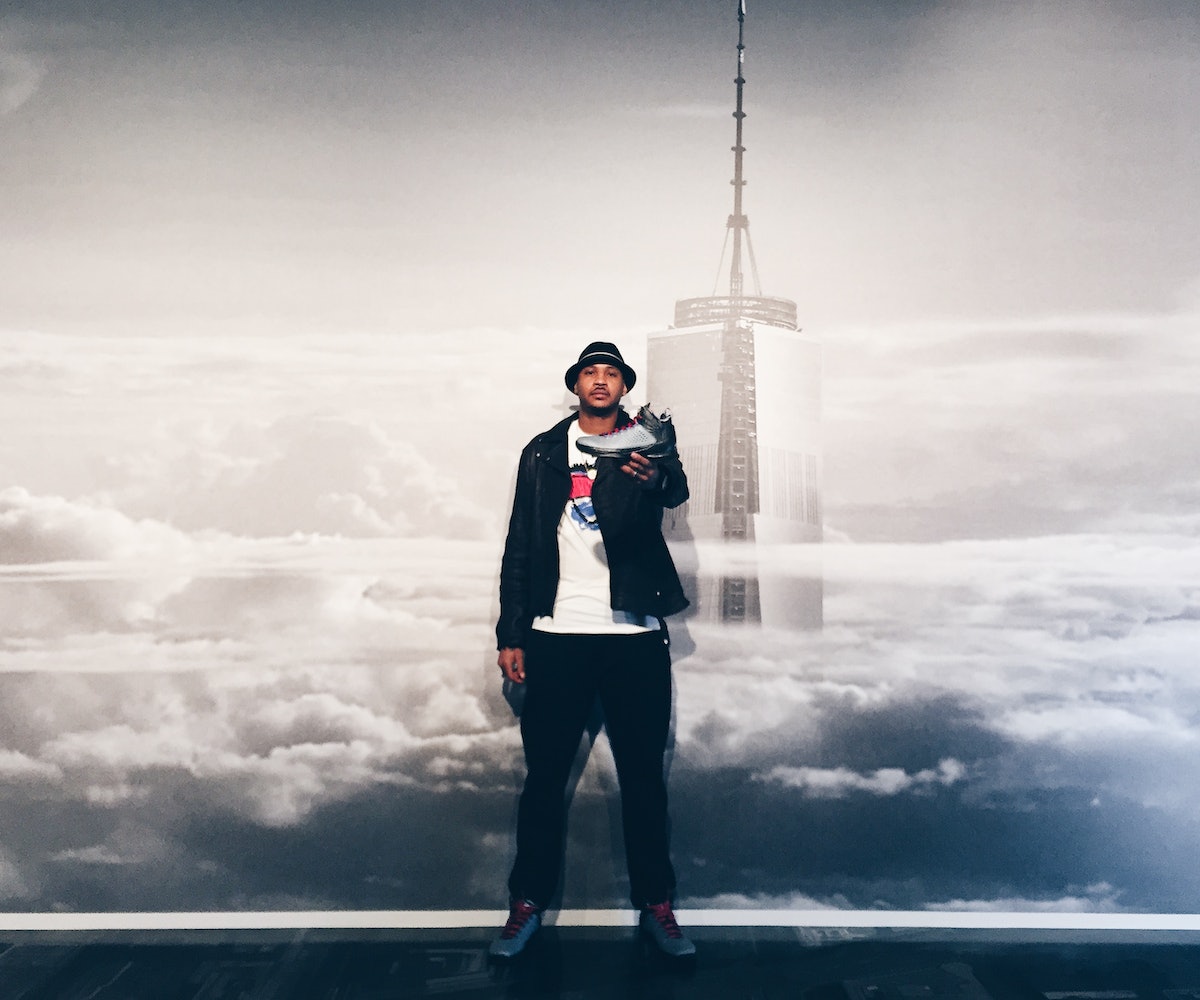 If ever you're looking to avoid a barrage of press questionsmore—given, you’re famous enough for press interviews—host the press yourself, on a tour through a gym erected in your name. Don’t have that kind of power? Well, Carmelo Anthony does, and last week, the perennial NBA all-star did just that, playing curator for the unveiling of his latest signature shoe, the Jordan Melo M11. A select group of writers and sneaker enthusiasts joined the New York Knicks forward at Terminal 23 in New York City for a tour through the newly redesigned space and a first-hand look into the life of Carmelo Anthony, as told by Melo himself.

The 30-minute tour saw the group through each of the innovative design elements behind the M11, which boasts features from Jordan Brand’s pinnacle Flight Plate technology—Melo’s favorite on-court feature—to the area codes of Carmelo’s childhood (410 and 718) found hidden in the molds of the soles. This was followed by a wear test, giving participants a chance to try the unreleased kicks while trying their best not to embarrass themselves or their respective publications. (Don't worry, NYLON Guys came correct.)

Melo said of the M11’s design that he wanted the shoe to have a more sophisticated look, well suited for clean color palettes and patterns, to tell dynamic stories. Anthony worked closely with designers to come up with colorways that are deeply routed in his childhood and playing histories.

Inspired by the concrete jungle, this colorway of the Jordan Melo M11 juxtaposes the grit and shine of one of the world’s greatest cities. Grey across the forefoot echoes the concrete streets and the detailing on the tongue is a nod to brightly colored graffiti and street art, while a subtly speckled midsole evokes the bright lights of the city that never sleeps.

Melo wanted to include a colorway tribute to the Jordan Brand family, who have been with him and supported him throughout his career. Featuring the traditional colorways worn by Michael Jordan — black, red and white — the shoe calls to mind the great Jordan rivalries with New York throughout the 1990s.

Born in the Red Hook projects in Brooklyn, Melo remains inspired by and committed to remembering his roots, even as he achieves great personal success on and off the court. This colorway brings to mind sunsets in Red Hook and early memories of his childhood in south Brooklyn.

Featuring a simple, premium color scheme, the black/gold colorway has luxury touches, and highlights throughout. As a tribute to his fans, Melo asked the Jordan Brand if he could poll the social media community to name the black/gold shoe, a first ever in the Melo shoe franchise history.

Check back to @CarmeloAnthony and @Jumpan23 to learn the results.