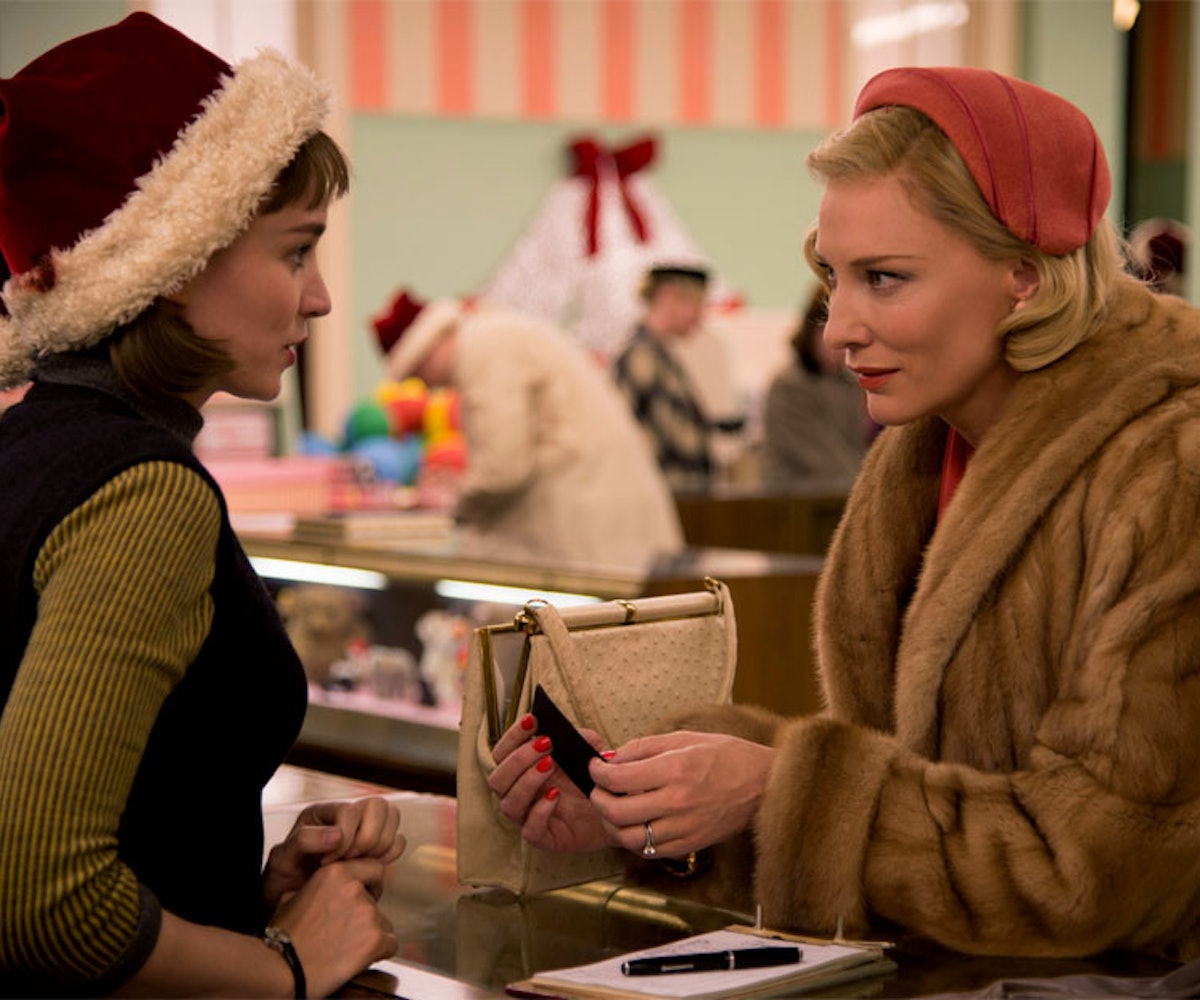 An odd thing happens when Hollywood throws big-name, sparkly celebrities into a movie about LGBT romance: It becomes “just a love story.” Quick to separate the feelings from the bodies, both audiences and reviewers judge the value of a film with a queer plot on the universality of the core relationship. Such was the case with The Kids Are All Right and Brokeback Mountain. But Carol, based on Patricia Highsmith’s classic lesbian pulp novel The Price Of Salt, is decidedly not a love story that just so happens to be about two women. That they are both women, and that it is the 1950s, is as central to what happens to them as between them.

The Price Of Salt is known for having a happy ending in a genre that is infamous for the opposite. In fact, for lesbian-centered novels to even be published during this time period, there had to be some sort of consequential lesson—usually the death of a main character. Salt, though, ends with the triumph of love. Closely following the plot of the book, Carol is experienced through the lustful eyes of Therese, played by Rooney Mara. She's a temporary department-store clerk in her early 20s with a boyfriend she’s not super into, professional aspirations she’s hesitant to go for, and silly hats. Carol is older—maybe in her mid-30s—in the middle of a divorce and custody battle over her young daughter. She wears bright-red nail polish and fur coats; she carries herself with what director Todd Haynes describes as the kind of deliberate feminine poise that “you might glimpse in your grandmother, but it’s something that is not produced anymore culturally."

After a chance meeting during Carol’s holiday shopping at the department store where Therese works, Carol’s elegance and mysteriousness becomes a wall that Therese’s wide-eyed desire eventually breaks through, revealing what Cate Blanchett described in a NYC press conference as her “quiet hell.” In other words, the proverbial closet. She's had a relationship with a woman before—her best friend Abby—and though Abby wasn't The One, it's clear that this affair informs Carol's understanding of herself.

Caught between the life she wants and the one she has, Carol’s invisible suffering is what separates her most of all from Therese—more than their age difference, more than their class divide. Where Therese doesn’t have that much holding her to the world of heterosexual tradition (her acquiescent boyfriend hardly counts as a factor) Carol is all strings-attached. Their developing romance puts Carol's entire lifestyle at risk, as she fights for custody of her daughter during a time when being gay was considered a pathology that made you an unfit parent. Consequences aside, they don’t fight their attraction. It’s the anchor of the film, and as their feelings deepen and become more complicated, so do the characters. Blanchett masterfully, gradually reveals Carol's vulnerabilities; she's her strongest when she's her most emotionally honest, and the actress shines the most in those moments as well. In fact, one has the feeling that Blanchett is the only actress who could have done Carol justice.

Less obvious of a casting decision is Rooney Mara, though for Haynes, it made perfect sense. "She brought the power of understatement," he explains. "I don't think she's ever played a character this simple, and I loved being able to bring that to her. I just thought, this could be something so demure and quiet. At a molecular level, you really watch this woman growing up in front of you." It's that simplicity, though, that makes the pairing of Carol and Therese at times puzzling. It's clear what Therese sees in Carol. But what is appealing about Therese—a person just beginning to know her own self—for the older woman?

"I think Carol asks herself that question, too," Haynes admits. "It's a really courageous, unsentimental part of writing a compelling, honest love story—we ask ourselves those things. We're driven by desire and instinct, but we're also going, why? You keep trying to find justification sometimes for why you're in love with the person you're falling in love with." And because Carol allows for those moments of questioning, it prevents this love story from being overly cheesy—a direction it easily could have gone in, thanks to the dramatically stunning visuals and (spoiler!) famously happy ending it shares with the novel.

The other major theme that sets this film apart is the fact that, even though it's clear the characters are falling in love for the first time, there's not the feeling that they are the only queer women on Earth. They don't have an exact model for their relationship, but neither of them think that they are the first women to fall in love. From when Therese asks boyfriend Richard if he's ever heard of two men falling in love to the major role that Abby plays, to even a brief moment when Therese sees a butch/femme couple and recognition flashes in her eyes, their desire is anchored to the rest of the world—even without the words to describe it. "Therese couldn't exactly say what she was," Haynes says. "She probably didn't even want to condemn it to language."

"She didn't want to be associated with anything that was corrupted by being visible," he continues. "It's almost like, 'There's something inside of me that I want to be, but don't tell me what I am.'" Haynes relates to that feeling: He explains that while coming out in the '70s, he felt the need to differentiate himself from the popular images of other gay men. "I had an erotic interest in that aesthetic but I was like, 'No, I'm not that.' There's a way in which you're preserving something that's not subject to the harsh light of the external world or names or definitions. It just feels more alive and more your own."

While the plot of Carol is urgent and full of twists, the strength of the film lies in the moments with the briefest bits of dialogue: On the phone from her apartment building's hallway, Therese says that she wants to ask Carol things but isn't sure if that's what Carol wants—and with a weightiness that speaks to a lifetime of not getting the kind of love she needs, Carol says, "Ask me things." The other, extraordinarily memorable parts of the film happen with eye contact, with stillnesses that mean more than actions ever could. For Haynes, that's what truly sets Carol apart. "I hope that the film gets known for really using the medium in ways that we somehow forget is so powerful about film," he says, noting that that the power lies in the "quieter, less-determined moments."

While watching, though, those quiet moments feel anything but. It's easy to forget that an entire scene has gone by with only a few words murmured, and even the last few seconds of the final scene, which is arguably the strongest, happen without words: Both women, irreversibly changed by their relationship and its consequences choose to be together, and the choice is communicated without words or even physical contact. A shared look across a crowded room is all that's needed to imply that a lifetime will be spent together. And for a movie with such exquisitely complex details, it's this perfect simplicity that holds it all together. In an Oscar race that is surprisingly filled with queer narratives, this is the one we've been waiting for.