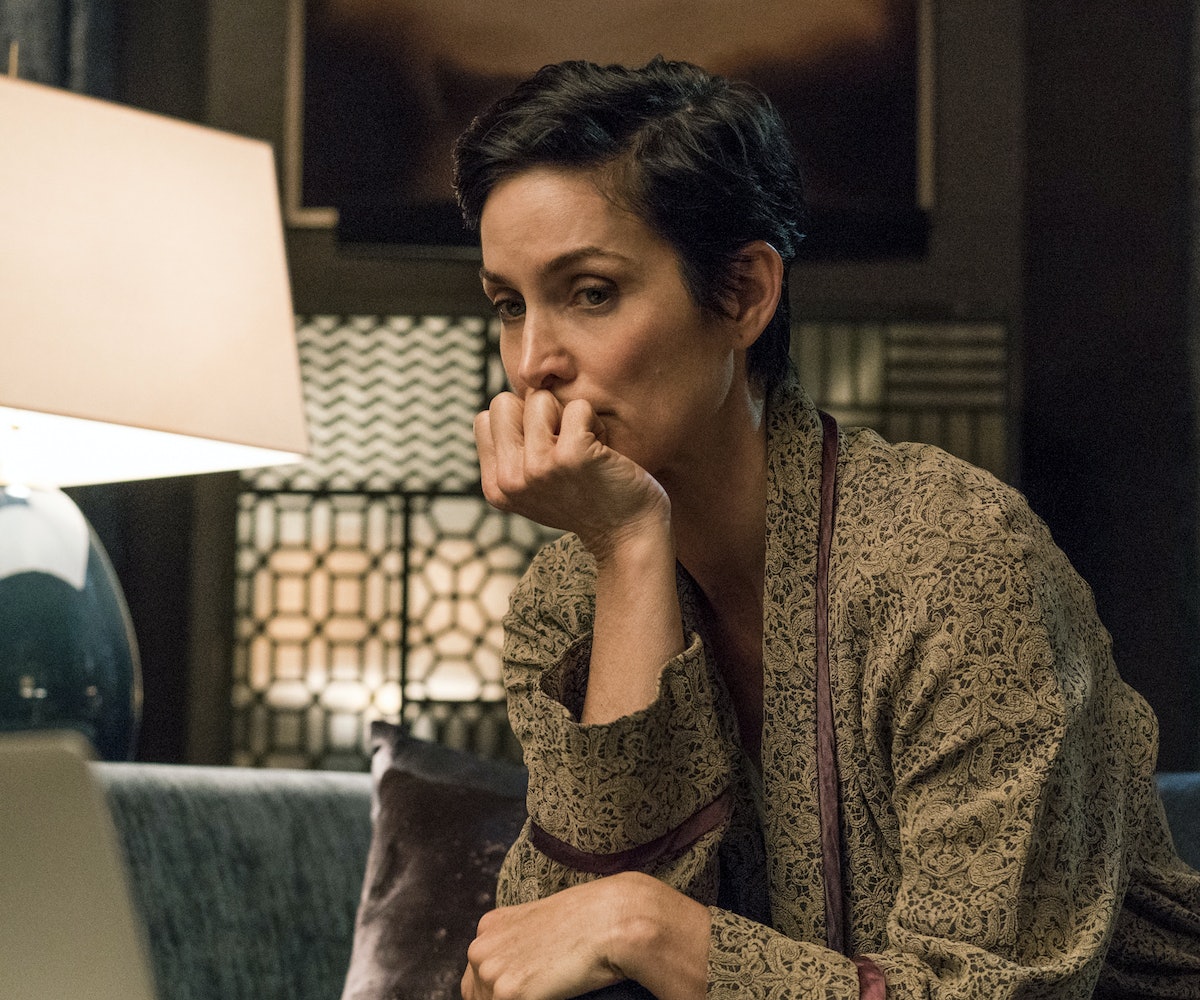 Carrie-Anne Moss may be best known for her role as Trinity in The Matrix, but the seasoned actor has also made critical waves as Jessica Jones’ resident hardass Jeri Hogarth—an intimidating, acid-tongued attorney who originally hired Jones to dig up dirt on her ex-wife. A character of somewhat murky morals, Hogarth seemed impenetrable in the show's first season, a woman seemingly immune to criticism thanks in part to her steely reserve and guarded temperament. And while we know that it's wrong to conflate the character with the actress, it was still somewhat startling to speak with an incredibly candid Moss. Unlike most, she acknowledges that she does not have all the answers, her humility somewhat jarring given the on-screen personas she typically inhabits. After all, from the no-nonsense Hogarth to her forthcoming project, Wisting—a Norwegian crime drama that sees her as an FBI agent on the hunt for an American serial killer abroad—Moss is no stranger to characters hardened by tribulation. That said, marital woes are only the beginning of Jeri Hogarth’s story this season. Ahead of the premiere of Jessica Jones' new season on Netflix, we spoke to Moss about playing a woman who has to drop the mask when she's forced to reckon with her morality, the things she's done, and an uncertain future in the face of a disease no one can truly control.

What would you say is the big difference between the themes that Jessica Jones explored in this new chapter versus the first season?

It's kind of tricky to encapsulate that because I haven't seen the whole thing put together. When you're crafting it, it's almost like you don't necessarily even know what you're part of. I think from Jessica's point of view, it's a very different journey for her. It's a much more internal, much more personal journey... I think this second season, you get to know her in a much deeper way. But you get to know the other characters, too.

Honestly, I remember even when I shot The Matrix, when I saw the finished movie, I had no idea that was the movie that we made—when you're in it, it's so different. For my character, we get to kind of see her at the top of her game, and then we just see her fall. It was really kind of great to see her in a certain mode the first season—really sharp and witty and cold and that archetype of fierce, tough boss, smart, and all that—but this season, I got to explore a lot of different parts of that character, which made her so much more human.

Your character discovers she has ALS this season, which really feels like this interesting parallel to the series' overall theme of women in control of their bodies and having that agency. What was it like filming that?

I really loved this season for myself, and I really credit the writers for my personal experience... the writing was so easy to say and easy to connect to. And to take [Jeri] on that journey, that intense journey, was really [interesting].

There's also this feeling of there being strength in vulnerability.

Yeah. You see someone who has their shit together and lives their life in a complete place of power [have it all] crumble in one moment, because she has no power over this. And what does anyone do [when they] get that kind of news? What was interesting for her though was how, in the first season, when Jeri tries to partner with Kilgrave, thinking she's gonna use him, I remember saying, "Yeah, she believes that he has this power," but that he couldn't [kill] her, because that wouldn't happen to her. Jeri's one of those people that's like, "That could never happen to me," so here she is, facing something that happened and... there's no buying your way out of this. So, who are you when your whole life has been built on that?

The show also did such a good job of not tokenizing her as Marvel's first openly lesbian character. And, I'm sure you'll do the same with the treatment of her illness. That said, were there any particular things you looked into to see how you could portray this experience to the best of your abilities?

It's really at the very beginning of her diagnosis. I think, inwardly, she’s completely terrified, and she has slight symptoms, but she's not in it yet—and I got that direction, too. It wasn't about playing [the disease] at this point. I definitely did my research, but the inner struggle of discovering was what I was interested in exploring. It's such a huge thing to imagine and think about, and there are so many people who are dealing with health issues at a major level. We had very subtle, little bits of [the disease] actually manifest on her physical body, but it was more about her mental situation this season. The internal, how that would feel to wake up and know, “This is my life.”

For her, she's a fighter. She's never going to give up, to [succumb] to this. She's gonna try to totally figure this out... Jeri Hogarth just had to let go of some of the bravado and be a human being.

How is Jeri and Jessica's relationship evolving in Season 2, amidst all this?

We start off where Jessica wants nothing to do with Hogarth. And Hogarth has tried a couple of times to reach out to her in the other shows—like in The Defenders.

It's interesting about Jessica. She's pretty hard-core, but I think we really get to see her compassion and vulnerability [this season]. And when I do come to her, and she doesn't want anything to do with me, I just lay down and tell her what is happening. I remember thinking on the day, She's the only person that I'm telling this to. That's how lacking in intimacy Jeri is. Other than her doctor, [Jessica’s one of the few people she has].

I remember one of the scenes that got me was when Hogarth said, "All I have is my name on that door." It's like, at that moment in your life—in anyone's life, facing your mortality—you realize you actually don't have anybody. So she shows up and has something with Jessica that is obviously more intimate than she realized, and Jessica is there for her in a way. Jeri shows up at her house, [and Jessica] could've just said, "Screw you, I don't want to talk to you," but she lets her in.

What is it like to be a part of this show that in the first season, in 2015, seems to have foretold this reckoning we're currently having when it comes to themes of sexual assault and agency.

I think we're touching on different themes in the show that are really relevant. Of course, we shot this way before everything kind of started to come out—not that we all didn't know it was all happening—but people started to talk about it in the way that I think is so great, on so many different levels. But as the mother of a daughter, I love that my daughter will grow up in a world where people are talking about it. [We’re] talking about all this stuff that's happened, and is happening, and has been happening for a long time in the world—not just in Hollywood or in gymnastics or in offices. This is an issue that everybody's dealing with on some level, but I think it’s about just keeping people talking.

I know that in the first season, people really were empowered by the character of Jessica Jones, and I hope that they can continue to feel that way and continue to be able to talk and see themselves in [an empowered way]. I think it helps when we're watching TV or movies, and we catch a glimpse of something that we can relate to. Or we see a part of ourselves in it, even if the person is so different than us.

It sometimes allows us to expand our own consciousness about ourselves, too. There's nothing better than being in something where people are talking about this stuff because it's got them thinking. If I think about making The Matrix, it's like that conversation began in 1999, and I still have the conversation about what that movie stands for now. On such another level, I now understand it in a deeper way all these years later. To me, that's why I love what I do, because of being able to reflect what's happening in the world through storytelling, through character.