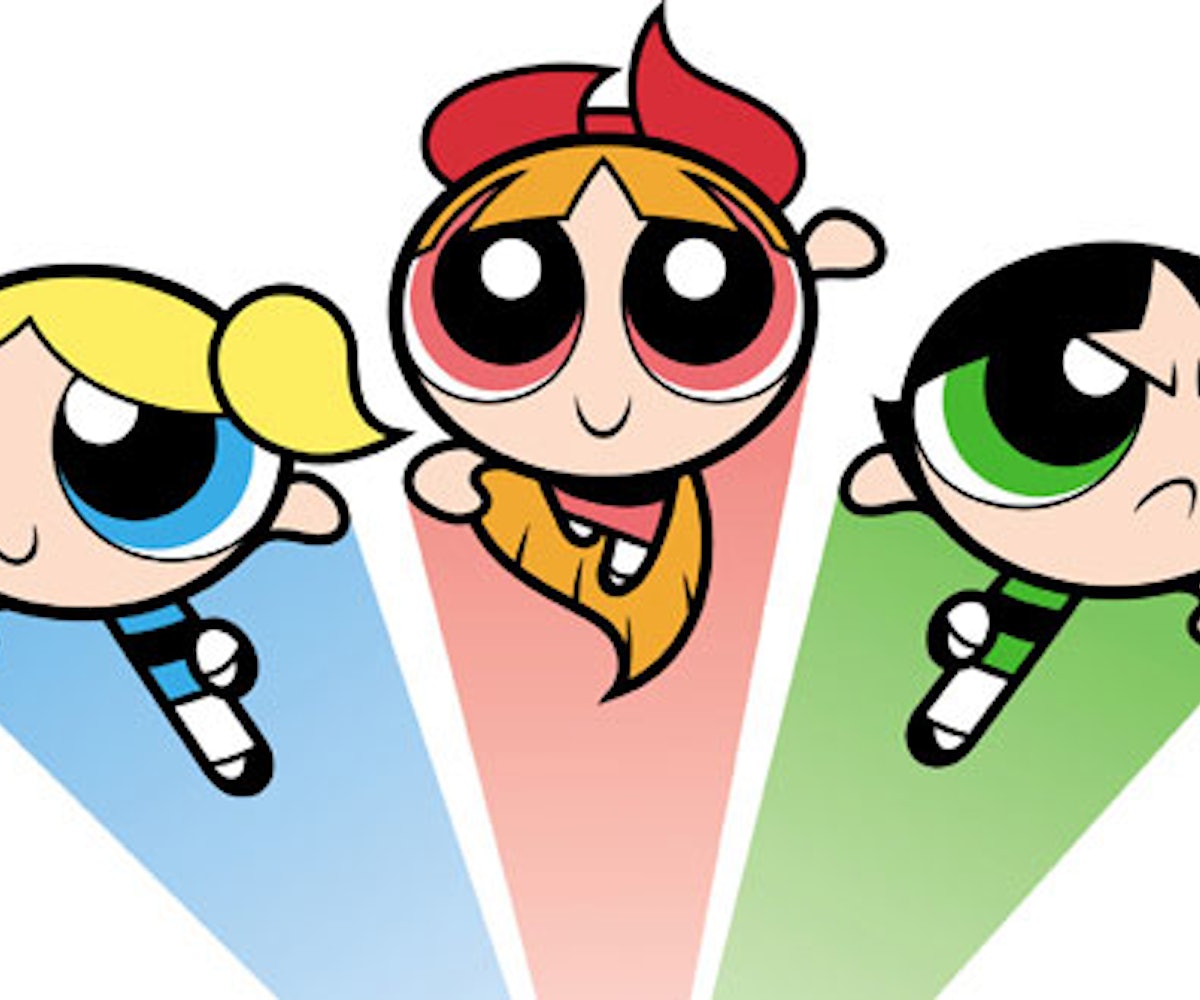 Growing up, your parents probably always told you that cartoons weren't good for your fundamental development. How could you possibly learn anything educational from a program with a purpose to make you laugh, right? We might not have realized it at the time, but looking back, we were actually deeply impacted by a lot of the girls we watched on-screen. Some characters were our first introduction to feminism, and we honestly wouldn't have grown into the women we are today without them. In the gallery above, we explain why these 15 cartoons are our favorites of all time and how they are responsible for changing our worlds.

Hands down, Daria is probably the most influential fictional cartoon character, so we had to list her first. She started as a minor character on Beavis and Butt-Head, but then MTV gave the sarcastic teen her own spin-off show and the rest is history. Phoebe Robinson said it best in her essay for Vulture, but it's amazing how all women are able to identify with Daria. Throughout college, my friends used to tell me that I was kind of like a "Black Daria," too, so I completely relate to Robinson. –Sydney Gore

When I was a little kid, I devoutely watched Arthur every single day. One thing I always liked about the show was that the characters were different animals, because that put less pressure on me as a child to identify with a race. The best character on Arthur was obviously Arthur's little sister, D.W. Even though she was a bit of a troublemaker and I was more obedient, I learned a lot about being stealth from D.W. She was bossy—but not like Muffy who was a spoiled brat—and she didn't put up with anyone's BS. While Arthur whined, D.W. was getting shit done, and she didn't wait for anyone's approval. She also mastered the resting-bitch face at a very young age, and I appreciated her assertiveness. Also, how many girls were referred to by their initials?! I like to think of D.W. as my spirit animal. –Sydney Gore

Like most cartoons, The Simpsons brought necessary comedic relief to our homes for the past 26 years. (I wasn't allowed to watch it, but I grew to enjoy it later on in college.) Most of the characters did stupid things, but the show provided underlying commentary on the woes of the working class in suburban America. Homer's daughter, Lisa, was the middle child, but the eight-year-old never had any issues with her place in the family—she was always more concerned about her place in the world. Lisa was smart, independent, and political, often challenging the other characters about issues in the real world like sexism, equality, consumerism, vegetarianism, and environmentalism. Lisa chose sarcasm over a husband, and refused to settle for a life dictated by Malibu Stacy's standards. Lisa is a feminist icon if I ever saw one. –Sydney Gore

While Eliza ran around the jungle, Debbie was always inside the mobile home listening to alternative music and reading poetry or magazines. The angsty 16-year-old was the epitome of grunge with her side-parted hair, baggy jeans, and button-down flannel that she wore over a crop top. Debbie was everything I wanted to be as a teen. –Sydney Gore

I don't remember much about the actual show and its episodes, but Blossom, Bubbles, and Buttercup represented all of the things I wanted to be as a child and, I guess, today. They were the cartoon versions of my favorite Spice Girls: Ginger Spice, Baby Spice, and Scary Spice. All three (six, if we're counting the Spice Girls), showed me it was possible to be fierce and kick ass, without losing a sense of charm. Hell, their name is such a solid oxymoron: powerpuff. There's strength in anything. I think it's high time I revisited the show, because there's probably a ton of adult lessons buried beneath all that sugar, spice, and everything nice. –Hayden Manders

Sailor Moon and her squad were typical middle-school girls with normal problems like homework, boys, and food cravings. They also had cats that could communicate with humans, which I'm pretty sure I have the power to do, as well. The show taught me a lot about the correlation between gender and power. Sailor Moon was the most feminine of the bunch, but that didn't prevent her from kicking alien ass. (After all, she was fully committed to fighting for love and justice above all else.) Sailor Moon made me believe in girl power, something that I am still dedicated to preserving today. –Sydney Gore

In the history of cartoon siblings, Doug's big sis was definitely the coolest of the bunch. Judy was overly dramatic and showed us what an original hipster was before Pitchfork existed with her artistic interests in slam poetry, fashion, modern art, and theatre. She was a director, so she had a tendency to take control in most situations, but her creativity was never too much for her family to handle. Judy's obsession with the color purple was admirable and nobody rocked a beret better than she did. (We'll never forget the time she lost her sunglasses, and suddenly, her sense of style was also missing.) Speaking on originality, Judy once said, "If no one ever copied anyone else, we’d all be running around naked, grunting at each other." –Sydney Gore

Tina Belcher, Bob's BurgersBob's Burgers has only been in our lives for the past four years, but it's definitely changed the way that we watch cartoons as adults. As the oldest daughter, you would expect Tina to be the leader of her siblings, but Louise and Gene sort of run the show while she does her own thing on the side. Tina embraces all of the things that most teens struggle with as they go through puberty—she's attracted to boys, she likes playing with ponies, and she actually doesn't hate her parents. (Instead, she does everything in her power to please rather than disappoint them.) Tina is awkward, but she doesn't let that hold her back from accomplishing things. Slate's Jon Christian hailed Tina as a "folk hero for young, anxious people," while The Mary Sue's Katie Schenkel praised Tina for owning her sexual agency. –Sydney Gore

Fionna, Adventure TimeThe girl version of Adventure Time's Finn sorta changed my life as an adult. It's subtle, but her body type is way thicker than the average girl cartoon character's, which I find adorable and relatable. Plus, she loves cats and can rock a pair of thigh-highs like nobody's biz. –Christie Craft

Ashley Spinelli, RecessSpinelli from Recess was such a badass. I'm pretty sure I had a crush on her. She was a tomboy with feelings. Into it. –Tile Wolfe

Starfire & Raven, Teen TitansBoth of the girls from the Teen Titans gang were not to be fucked with. Raven was 100 percent goth goals while Starfire reminded you to be nice every once in a while. They're both an inspiration for all loner weirdos forever. –Tile Wolfe

Miranda Killgallen, As Told By GingerOkay, I'm not going to pretend that Miranda wasn't a villanous character on As Told By Ginger. When I originally watched the show when it aired from 2000 to 2009, I couldn't stand her because she was so mean. Later in life, I realized that Miranda isn't as bad as we are led to believe—she was a complex character that was extremely misunderstood, and she didn't get enough character development because she was the antagonist. There aren't a lot of black characters in animated television shows, so it's kind of disappointing that Nickelodeon made Miranda the least-likable person in this series. Miranda's struggles were the same as mine, and I completely understand why she might have chosen to take her frustrations out on people she found threatening instead of dealing with them directly. (I wasn't a "mean girl," but I definitely lashed out at people I cared about to cover up personal insecurities.) You try being the only person of your race in public school and tell me that you didn't have problems trying to fit in and find your place. How would you feel if everyone was obsessed with your beautiful, blonde BFF and didn't give you the time of day? Miranda's parents were strict and stressed the importance of academics on her like a lot of black, middle-class families. Miranda was forced to play clarinet in band, while I was stuck with the viola in orchestra. Miranda is also fluent in sarcasm, which is my first language, and had an amazing sense of style. As an adult, I can honestly say that I am less of a Susie Carmichael from Rugrats and more of a Miranda Killgallen. –Sydney Gore