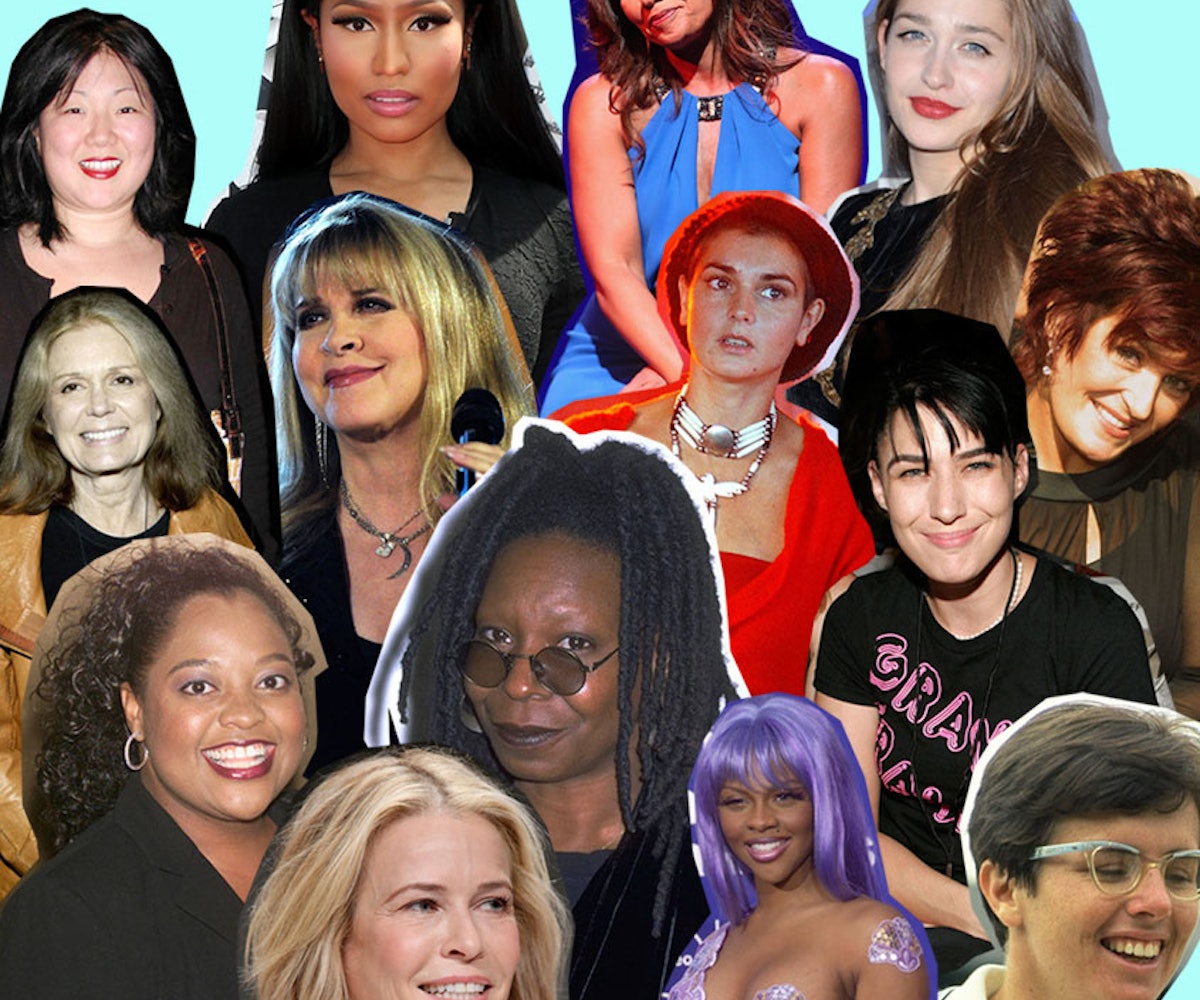 There's a stigma attached to terminating a pregnancy that can feel inescapable, no matter what side of the abortion debate you fall on. And that stigma is upheld by the fact that women don't really talk about their abortions—so many of us have had them, and yet we don't talk about what it was like, or why we did it, or how we feel about it looking back on the choice. This culture of silence is harmful: It can make women feel like they're alone, when really, it's something that a lot of people have decided to do.

Not everyone is remaining silent, though. Certain celebrities have used their high profiles to talk about their own abortions: And whether speaking bravely about how they don't regret the decision or talking frankly about conflicted feelings, the important thing is that they're not sweeping it under the rug. They're talking, and the world is listening.

Ahead, 14 of our favorite celebrities who have shared their personal experiences with abortion.

The outspoken comedian has not been shy about her experience, telling the New York Times, "I had an abortion when I was 16. Because that’s what I should have done. Otherwise, I would now have a 20-year-old kid. Anyway, those are things that people shouldn’t be dishonest about it.” Her point—which is being honest about abortion—is one that activists have been making more and more.

The rapper first opened up about her abortion to Rolling Stone, saying, "I thought I was going to die. I was a teenager. It was the hardest thing I have ever gone through. . . It has haunted me all my life." Still, despite her experience—which she references in her song "All Things Go" ("My child with Aaron, would’ve have been 16, any minute")—she remains pro-choice. "It’d be contradictory if I said I wasn’t pro-choice," she said. "I wasn’t ready. I didn’t have anything to offer a child.”

In 2007, Jemima Kirke had an abortion—without anesthesia. "My life was not conducive to raising a healthy, happy child," she said of the experience, and though she does not regret the decision to have an abortion, she doesn't want other women to have to sacrifice anesthesia because of the cost. "We think we do have free choice and we are able to do whatever we want, but then there are these little hoops we have to jump through to get them," she said.

After years of speculation that Nicks once terminated an unplanned pregnancy with Eagles frontman Don Henley, and then went on to write a song about their unborn child titled, "Sara," Nicks clarified matters to Billboard. "Had I married Don and had that baby, and had she been a girl, I would have named her Sara," she said. "But there was another woman in my life named Sara, who shortly after that became Mick's wife, Sara Fleetwood."

"I had an abortion at 17 and it was the worst thing I ever did. It was the first time I'd had sex, and that was rotten. I'd always thought it was going to be all violins, and it was just awful," Osbourne told Daily Mail. Recounting her experience, she said that she realized she was pregnant two months later, and asked her mom, whose response was, "You have to get rid of it," and directed her to the clinic. Osbourne then underwent the procedure alone.

"I would never recommend it to anyone because it comes back to haunt you," she said, touching on her belief that her abortion led to future miscarriages.

The rumor of Lil' Kim opting to get an abortion when she became pregnant with Biggie Smalls has long haunted the history of hip-hop.

She confirmed it on The Breakfast Club

, saying, "I don't know if I have regrets...you know, about keeping it. Sometimes I do. Sometimes I don't. But then, I say, what would have happened to my career?"

While discussing her memoir, You Have No Idea, with Nightline, Williams opened up about her abortion experience. "Being pregnant is the most frightening thing that happens in your life," she said. "I knew in high school that's something that I was not prepared to do or fight or struggle with." She later said, speaking more generally of her life experiences, "I've learned to embrace my past. I embrace the choices that I have been given in my life."

"I talk a lot about abortion and people get really freaked out, "Margaret Cho told XOJane. "I’m not even making a political statement. I’m just talking about what happened! I have had them and I want to talk about them. I don’t care what your views are toward abortion, I just think women should be talking about it." According to this feminist comedian, if men had abortions, the experience would be discussed way more—so it's up to women to make sure that happens.

Women's rights icon Gloria Steinem didn't talk about the abortion she had when she was 22 not because she felt ashamed, but because she didn't. She told The Guardian, "[Abortion] is supposed to make us a bad person. But I must say, I never felt that. I used to sit and try and figure out how old the child would be, trying to make myself feel guilty. But I never could!" All that changed when she reported on a speak-out in which women spoke about abortion in the early 1960s—and that event also inspired her to join the movement.

During a 2012 segment of The View, the conversation turned to a Texas law (which is still in effect) that requires women to see sonogram footage and hear the fetus' heartbeat at least 24 hours before an abortion procedure. After the hosts took different sides on the issue, Shepherd interjected. "We stop at the picket signs and we don't help you past that!" she said. "I'm speaking as a girl who had a lot of abortions and I swear to God, if they had shown me a picture of the fetus... I would have put my child in a lot of situations that wouldn't have been good because I didn't have the mental capacity to deal with having a child."

The highly spiritual Catholic has talked about her own abortion frankly and poetically, and wrote a song about the process, with the royalties going to the Red Cross. "It was a planned pregnancy, which I was very happy about. I was completely in love with the father of the child...But things didn't work out between us and we were both unhappy. It was too much for him to be able to handle. He was young (26) and I was on tour, and I was feeling ill all the time because I was pregnant and I was feeling so awful and I made the decision that it would be better for everybody if I had the abortion...I didn't have a sense of guilt about the abortion. If I had had the child, I wouldn't have been in any state to be the mother that child would have deserved. It wouldn't have worked that way. As far as I'm concerned, that child's spirit is gone and perhaps some day it will return."

In The Choices We Made, Goldberg speaks about how she grew up without any form of sexual education, and didn't find out about birth control until her teens. When she was 14, she became pregnant. "I didn't get a period. I talked to nobody. I panicked," she wrote. She resorted to the at-home remedies of the time, like sitting in hot baths and drinking "strange concoctions" made of Johnny Walker, Clorox, baking soda, and alcohol. "At that moment, I was more afraid of having to explain to anyone what was wrong than of going to the park with a hanger, which is what I did," she wrote. "The worst thing was not knowing what I was doing, really."

Before she became a key part of the Riot Grrrl movement, Kathleen Hanna was a 15-year-old working at McDonald's who needed an abortion. As she told The Rumpus, "I spent the money I earned at McDonald’s to get my abortion. I was only 15 and the person who got me pregnant did not want to give me any money. I was $40 short, so I had my drug dealer call him and threaten him, so he gave me the last $40." The procedure changed her life: " Maybe that’s a fucked-up thing to say, but I don’t regret it at all, number one, and number two, it was one of the best things that happened to me. Not actually being on the table and having it done, but feeling like I was responsible for my own life and realizing that when I made mistakes, there were consequences and that I could take care of those consequences."

Billie Jean King is such a badass. On top of being a tennis great, an activist, and one of the first women to go to the media about her sexuality, she also speaks frankly about making the choice that was right for her and her family. She tells Makers, "The reason I had an abortion is because I was not in a good place. I was just finding out about my sexuality, I was trying to figure my life out, I was trying to get the tour started...I just...did not want to bring a baby into the world. And that was very important to me. I think that is the most important thing in the world. If you bring a child into the world, to me, he or she takes...go first. That's it, done. I did not want a child to be born under the circumstances I was in. I just did not think it was right for the child."