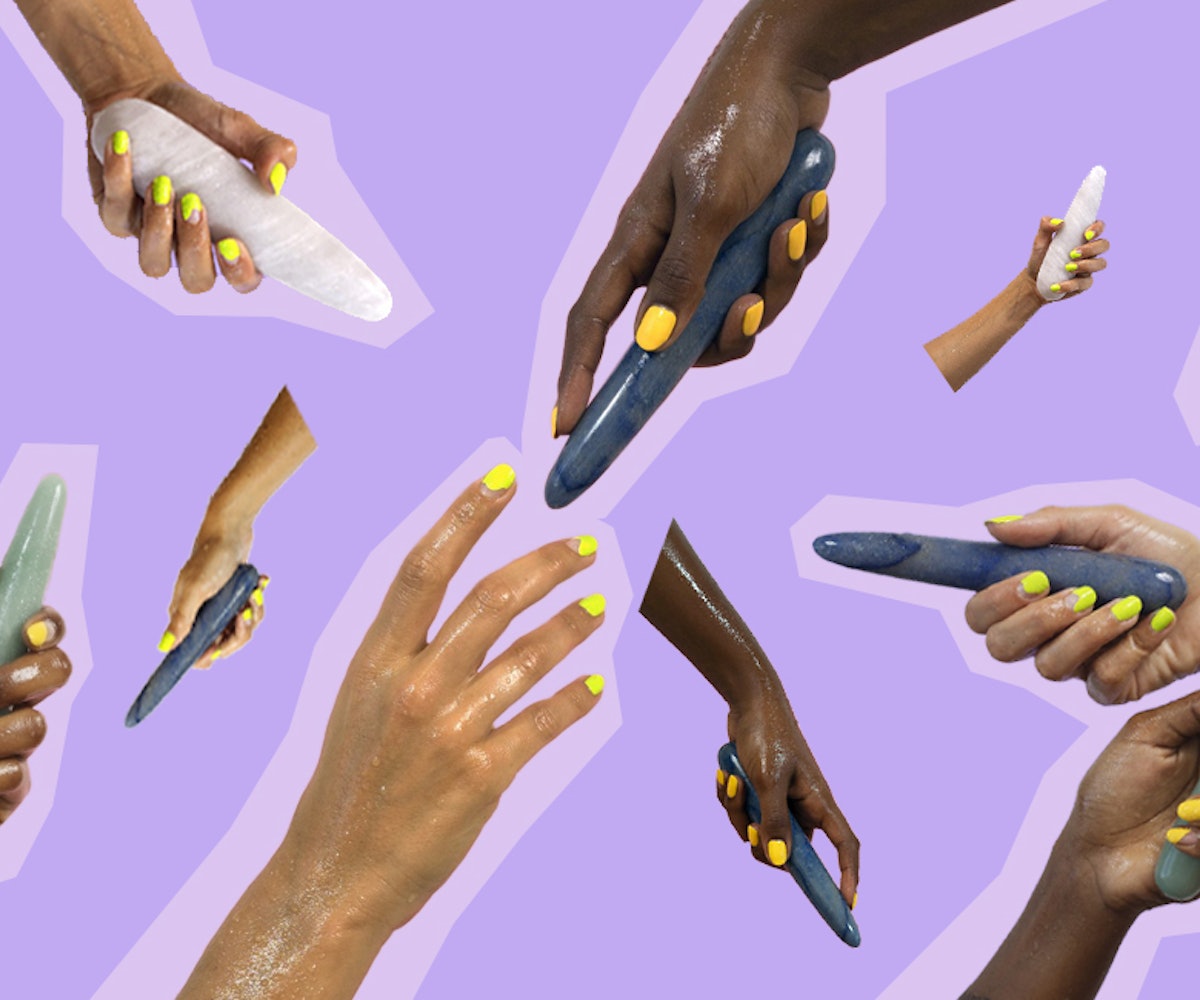 In the past few years, everyone from Urban Outfitters to the indie hole in the wall down the street has hopped onto the crystal trend. But while necklaces, larger meditative stones, home accents, and even crystal-infused water bottles for transformational hydration have been trending for a while, crystals used for sex purpose have only recently appeared on the scene.

To better understand the thought process behind putting crystals in untraditional places, as well as their benefits down below, we tapped Chakrubs founder, certified crystal healer, and author of Crystal Healing & Sacred Pleasure: Awaken Your Sensual Energy Using Crystals and Healing Rituals, One Chakra at a Time, Vanessa Cuccia, and took notes. Because, while crystals can be life-changing when worn around your neck—even if only psychically—we could only imagine the possibilities of their other, um, applications.

What made you want to launch a line of crystal sex toys?

The idea for Chakrubs had probably been brewing since I first discovered my own sexuality. Not that I was thinking about crystal pleasure products at nine years old, but even at that age, I knew feeling shameful about my body and arousal wasn't right.

What made you feel shameful about your body?

I was born with a condition where the inner labia of my vagina were closed, and for six months, I received treatment from doctors and my mother to keep me open. This was painful and embarrassing, to say the least. I'd even repressed the memory until I started practicing with Chakrubs [part of the practice is to uncover repressed emotions in order to unlock energy flow]. So discovering the pleasure in this area wasn't all pleasure, but something I knew I had to pursue nonetheless.

How did you get over that shame?

Like most kids, it was clear to me that sexual pleasure was something I was required to hide, but I didn't understand why. I became very interested in sexuality. It was a topic I enjoyed discussing as a teenager, even more so than most teenagers. I wanted to understand more about this thing that felt so natural but for some reason was considered taboo. To this day, I find it fascinating that mentioning sexuality creates such tension and discomfort in so many people.

How did you embrace those feelings and your sexual curiosity and harness it into the brand?

In 2011, when I had the idea for Chakrubs, I made a decision to really go for it in terms of making it a reality. I was 23, and it was time for me to take control over my life and my happiness. I had stayed with the boyfriend to whom I lost my virginity to for six years, never truly feeling sexually satisfied or empowered. I felt that I was now old enough to start something amazing and be taken seriously.

What made you feel like you could succeed with the launch?

My father is an inventor, my mother the CEO of the company that sells his invention globally. I'd had many business ideas of my own in the past, but I'd never followed through on any of them. Chakrubs, however, unfolded so naturally that I felt it was destiny. I was living in Los Angeles and hosting the creator of the web series Spirit Science—he's left the series since—but it is dedicated to teaching people about spirituality from a scientific perspective. He taught me a great deal about chakras and crystals. I was working at The Pleasure Chest, a sex toy shop, at the time as part of a kind of "removing shame" experiment. My coworkers were nonjudgmental, open, and accepting of others. It was a great experience and helped me in many ways. I spoke with many different people about their desires and fantasies and even medical needs.

Then one night I tagged along with my house guest [the creator of Spirit Science] to the home of a woman with whom he intended to discuss some business venture as well as their respective spiritual philosophies. She showed us her collection of crystals, and when she produced one that was particularly phallic in shape, something "clicked" within me. I hadn't felt drawn to any of the items at the toy store, as many of them were made of plastic, battery-powered, and created by men. The molecular structures of crystals, on the other hand, are so perfect that they vibrate at, and emit, very strong, very harmonious, very healthy frequencies. Combining those frequencies with a person's own sexual energy might not only increase pleasure but might also help facilitate personal awareness and growth.

Did you know you wanted to name the company Chakrubs right off the bat?

The name came to me almost instantly. I actually shouted it out that night, spontaneously, in the midst of this meeting of spiritual minds. I'll never forget how everyone turned and looked at me, their eyebrows raised in shock and mild reproof. The fact that even people so dedicated to self-nurture and open-mindedness had such hang-ups about sexuality was yet another sign that the world needed Chakrubs. It simply didn't make sense to me that this aspect of the human condition—the ability to feel sexual pleasure—was something we should feel ashamed of.

So that was back in 2011, what was the next step in making your vision a reality?

As the days passed, I spoke with many people about Chakrubs. These conversations were some of the best conversations I've had in my life. When you combine the topics of spirituality and sexuality, you really get to know people. I had researched to try to find anything like this, without much luck. There were some decorative phallic-shaped crystals, but I could not find any companies dedicated to providing pleasure products made out of actual crystals. Shortly thereafter, I moved to Santa Cruz to work for a small, independent radio station. I lived in the middle of the Redwood Forest with other musicians. There I met an incredible group of women who taught me about compassionate communication and the power of womanhood. These women became my first focus group. One day, we sat in a circle and drew our own designs, discussing which crystals we'd use and eventually testing out the first-ever Chakrub.

When it came to that first prototype, what made you choose the stones you did?

Each one has to be non-toxic for the body and come from the mother stone [a big chunk of crystal] in order to be polished down into smaller pieces. I had to consider the logistical aspect of what was available and I began sourcing from Brazil, Madagascar, and China to bring the brand to life. I had a few stones top of mind when searching, including clear quartz for clarity after a breakup and in life in general, rose quartz to soothe a broken heart and attract love, amethyst to create a sense of safety and calm, and so on. From there, I expanded the collection based on what I thought customers would want and need most.

Can you tell us a bit more about the healing powers of crystals?

Crystals themselves aren't healing, it's their ability to facilitate energy movement. It helps alleviate disease—as in a disorder of structure or function in a human, not an [actual] disease—in the body for better wellness overall.

Earlier in our conversation, you also mentioned something about crystals' role in aligning chakras. Could you elaborate?

Chakras are the energy centers in your body. They correlate to the endocrine system. They're where a bunch of nerves are crossing over each other. They also go beyond that for points of energy in our body. With Chakrubs, I'm most focused on the root chakra at the base of the spine that correlates to genitalia and the lowest point of the sexual organs. The sacral/sex chakra, which correlates to sexual energy and emotions, is also, obviously, top of mind. Beyond that, the heart center connects the higher chakras and the lower chakras. Think about it: When you go through a breakup, you can physically feel it in your heart—that's because there's all that energy there. So, with those three chakras at the heart of my intention for this line, Chakrubs aims to help people connect to those places in their body to help them not only feel sexually satisfied but to heal and give care to these things we all experience that get stuck in our bodies and require love and attention.

After sourcing the crystals and bringing the prototype to life, what happened next?

I started the company in 2012, moved back to NYC in 2013, and have been letting it unfold how it wants to ever since. It is an entity of its own, with a mind of its own, and I am simply here to help it along its way. That it has been written about in New York Magazine, Cosmopolitan, Marie Claire, and other great publications—that it has been featured on Vice and was nominated this year for Sex Toy of the Year by Xbiz—is thrilling and humbling. But the greatest feeling I get is when I receive testimonials from people who say that Chakrubs has given them a safe and therapeutic space for pleasure.

Scroll on to discover a few of the most popular Chakrubs toys, as well as their benefits.

Purpose: Rose Quartz is a stone of the heart, a Crystal of Unconditional Love. It carries a soft feminine energy of compassion, peace, tenderness, healing, nourishment, and comfort. It speaks directly to the heart chakra, dissolving emotional wounds, fears, and resentments and circulates a divine-loving energy throughout the entire aura. Reawakening the heart to its innate love, it provides a deep sense of personal fulfillment and contentment, allowing one the capacity to truly give and receive love from others. It dissolves the sorrows, worries, fears, and resentments suppressing the heart's ability to give and receive love.

The Original Heart, $150, available at Chakrubs.

Purpose: Amethyst is a meditative and calming stone which provides calm, balance, patience, and peace. Amethyst is also excellent for meditation and lucid dreaming. Emotionally, amethyst is used to help heal personal losses and grief, bringing one gently past. Amethyst has a gently sedative energy that can promote peacefulness, happiness, and contentment. It also is said to bring emotional stability and inner strength. This stability and strength not only helps one hold firm in one's life, but it can enhance flexibility and cooperation. Amethyst is known to a sobriety stone. It has been used to prevent drunkenness and get rid of addictions like alcohol, drugs, and smoking and destructive compulsive behaviors of all kinds.

Purpose: Inspired by a customer request, The Viper has a unique curvature and ridged shape for extra sensation. Made from 100 percent obsidian, this stone can be used to help us see hidden aspects of the self and release negative blocks. The protective and cleansing properties of obsidian make this instrument ideal for tantric or sacred sex rituals. Resembling a rattle or stinger, the Viper is a perfect Shadow Line addition to help you honor your darker impulses.

NEXT UP
Life
On Repeat: Vaquera’s Away Collaboration Is Brought To You By Britney Spears B-Sides
Life
Netflix Dropped A Sneak Peek Of Bridgerton Season 3
Life
Jennifer Coolidge Checks Back Into ‘The White Lotus’
Life
Alison Roman Is Getting Her Own Cooking Show