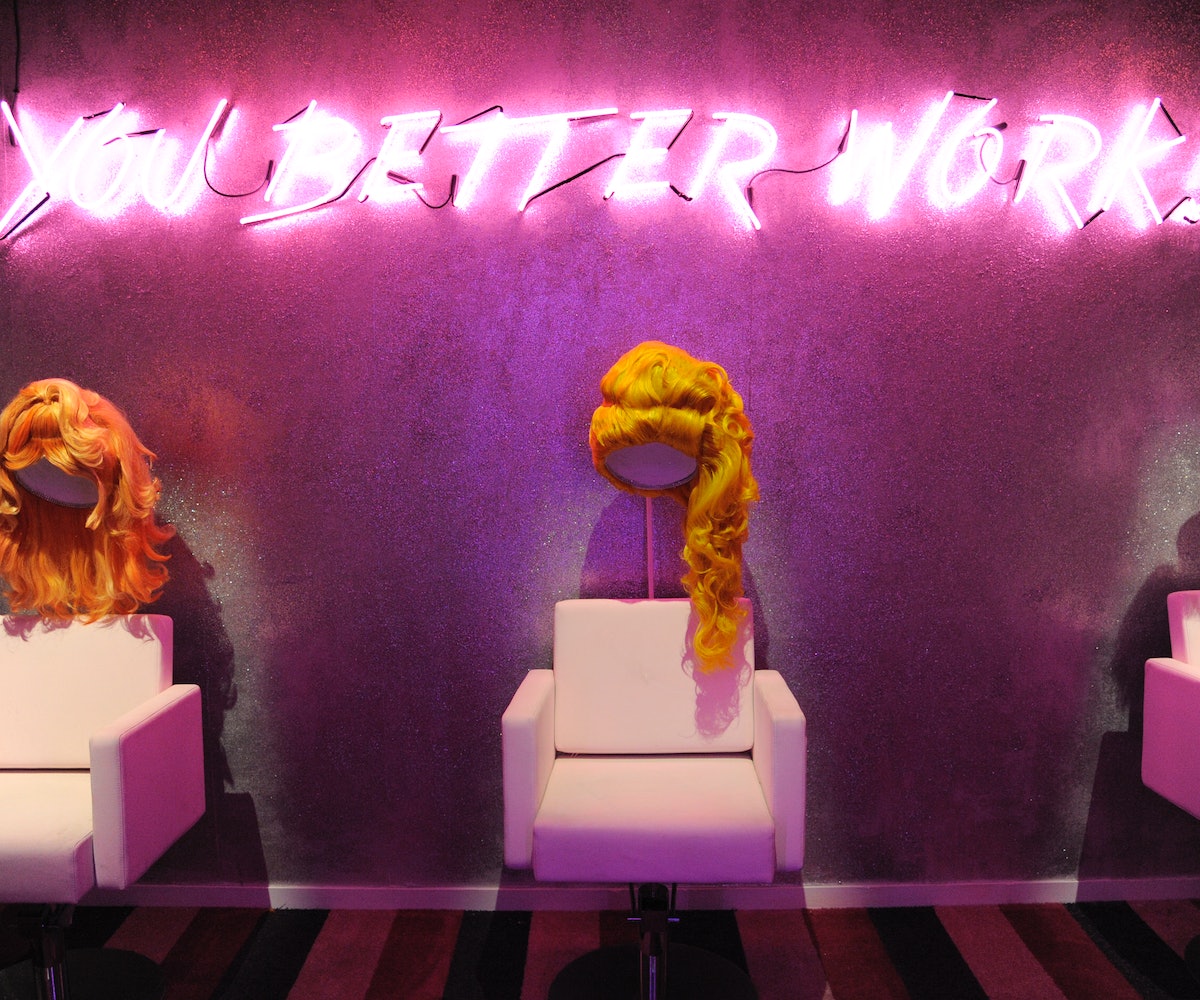 “You're born naked and the rest is drag,” RuPaul has famously quipped for decades. But the phrase has been so oft-repeated, it's hard to say it aloud without the nearest drag queen rolling her eyes. Despite the whimsy of the quote, many people's definition of drag has remained rather stagnant: It's when a man dresses up as a woman–or something–right?

But as the very concept of gender explodes, perhaps we should reconsider the accepted definitions of the word “drag.” The term originated in Shakespearean times as shorthand for “dressed as a girl,” or so the story goes because back then women were not permitted to be actors. Whether or not that tale has any validity now is beside the point; drag slowly morphed into its own art form over the past few hundred years, and only recently have we begun to rethink the word so completely.

If the post-Tumblr generation of millennials has taught us anything, it's that gender is a social construction; there are never-ending possibilities of gender expression and identity. The idea that "drag" could be defined as “clothing typical of one sex worn by a person of the opposite sex,” which is actually how it's defined in Merriam-Webster, now seems almost laughable to those who spend their lives in gay bars. Isn't the idea of an “opposite sex” itself obsolete? As we reconsider the vast complexities of gender, it's about time we threw out the idea of gender as a spectrum (with male on one end and female of the other) and start doing better with our explanatory metaphors. Gender is closer to (if you can forgive the hippie turn of phrase) a mandala than a spectrum, with maleness and femaleness knotting eternally in interlaced spirals. But gender is more than any 2-D image—gender has a smell, a feel, a taste; it exists in time and space.

If drag has nothing to do with the now-defunct concept of “opposite sex,” then what the hell is it? A semiotics professor of mine once quipped that after Marcel Duchamp, “anything can be art, but not everything is art.” Could the same be said of drag? Has the word become as nebulous and confusing as “art” itself? Post-modern theory aside, a simple visit to a Brooklyn, New York, nightclub would immediately relieve one of their assumptions about drag as an art form of illusion based on binaristic ideas of anatomical difference. Bearded queens have become common, as are fashionable, alien-esque club kids in the tradition of great artists like Leigh Bowery. Plenty of trans women do (and probably always have) performed as queens, with many realizing they were trans as they played with their own expression through art. We reached out to a handful of trans and non-binary drag performers to get their takes on the subject:

"For me, [drag] was the beginning of learning to navigate spaces as someone who isn't read as 'boy,'" says Daphne Sumtimez, a Brooklyn-based transgender drag performer. "It’s taught me how much agency we all have in forging our identities."

"I’d say that the number of definitions is increasing," Sumtimez adds. "I’m sure drag still means the same thing it always has to a lot of people, but there are as many definitions of drag as there are people thinking about drag, and that number is certainly on the rise… Drag is just dressing up as someone or something other than what you are currently dressed up as."

"As a trans person, I don't feel that drag is about attempting to emulate the opposite sex, but more of a way to transform into my ultimate form!" says Haus of Umpteen Corpses member Megababe, another Brooklyn-based trans drag performer. "When else is it appropriate to be in a thong bikini and seven-inch heels in a full split on the ground, helicoptering your ponytail around?! [At first,] I was so reluctant to do drag because I was afraid my femininity would be seen as simply a performance and not as part of my identity, but drag helped me realize that self is the one I am most at home as."

"Drag not only saved my life but help mold me into the strong trans woman I've become. [Drag] allowed me to present myself unapologetically," concurred Lila Star Escada, a Chicago-based trans queen.

The Ladyqueen industry is booming too. Rejecting the label bio-queen or faux-queen, these women (many but not all of whom) were assigned female at birth and exaggerate their “femininity” on the stage. In this new drag universe, there are trans men who perform as queens, cisgender women who perform as kings, non-binary people performing as neither or both—the combinations are literally endless. And pronouns? This seemingly persistent problem is easily alleviated by one simple gay nightlife trick: Call everything “girl”—even inanimate objects.

"I absolutely connected with myself on a deeper level when I began to explore what 'feminine' meant to me via drag," says Mx. Macabre, a Boston-based non-binary drag performer and burlesque artist. "Womanhood has always felt performative to me, and in adopting the role of Queen, I finally felt an alignment between the way society perceived me and how I viewed myself. As someone who exists outside the binary in daily life, drag helps fit together the jumbled pieces of the way society perceives me."

"One of the reasons I started drag was to be able to get in touch with my feminine side without feeling or being read as female," agrees non-binary ladyqueen Pieretta Viktori. "Getting that validation helped me a lot and made me more comfortable both in my androgyny and in my constructed version of femininity."

Ironically, it has been RuPaul who is now behind some of the more restrictive ideas about drag, despite massively popularizing the art form. When asked if he'd ever feature a “female drag queen” on his show, he responded flippantly:

Even within the queens featured on his program, those who too-violently transgress the binary often do not fare so well and trans contestants are an exception rather than a rule. Full-on genderfuck is a delightful and sometimes celebrated rarity on Drag Race, but the judges are mostly coming to see men dressed as women–and contestants are often judged on how well the illusion stands up. RuPaul's vision of what drag can or can't be is so strict, in fact, that alternative drag competitions have sprung up on local stages and on YouTube, Reddit, and Tumblr, with the Boulet Brothers' horror-themed homage Dragula being a notable example.

If I were to offer a new definition of drag, it would be this: “a genre of performance delivered in the medium of gender,” or perhaps “costume exaggerating gender signifiers.” Notable NYC drag king Goldie Peacok's definition—a form of entertainment in which a performer “assumes a theatrical guise of maleness, femaleness, in-between-ness, none-of-the-above-ness in and for a performance”—seems pretty good, too.

With RuPaul's Drag Race just entering its ninth season (accompanied by a huge time slot shift from Monday to Friday nights and a major network changeover from Logo to the more mainstream VH1), it seems almost assured that the meaning of drag will continue to transform. As for the standards of the show itself? There are certainly some signs of progress. Take, for example, season nine queens like Aja and her playful and often unpadded interpretation of the female silhouette, Sasha Velour's artsy bald-headed androgyny, or Peppermint's unapologetic existence as a proud trans woman.

And what about season 10? Casting calls have been made, and the requirement that contestants be male seems to have been dropped. The times, they are a-changing.