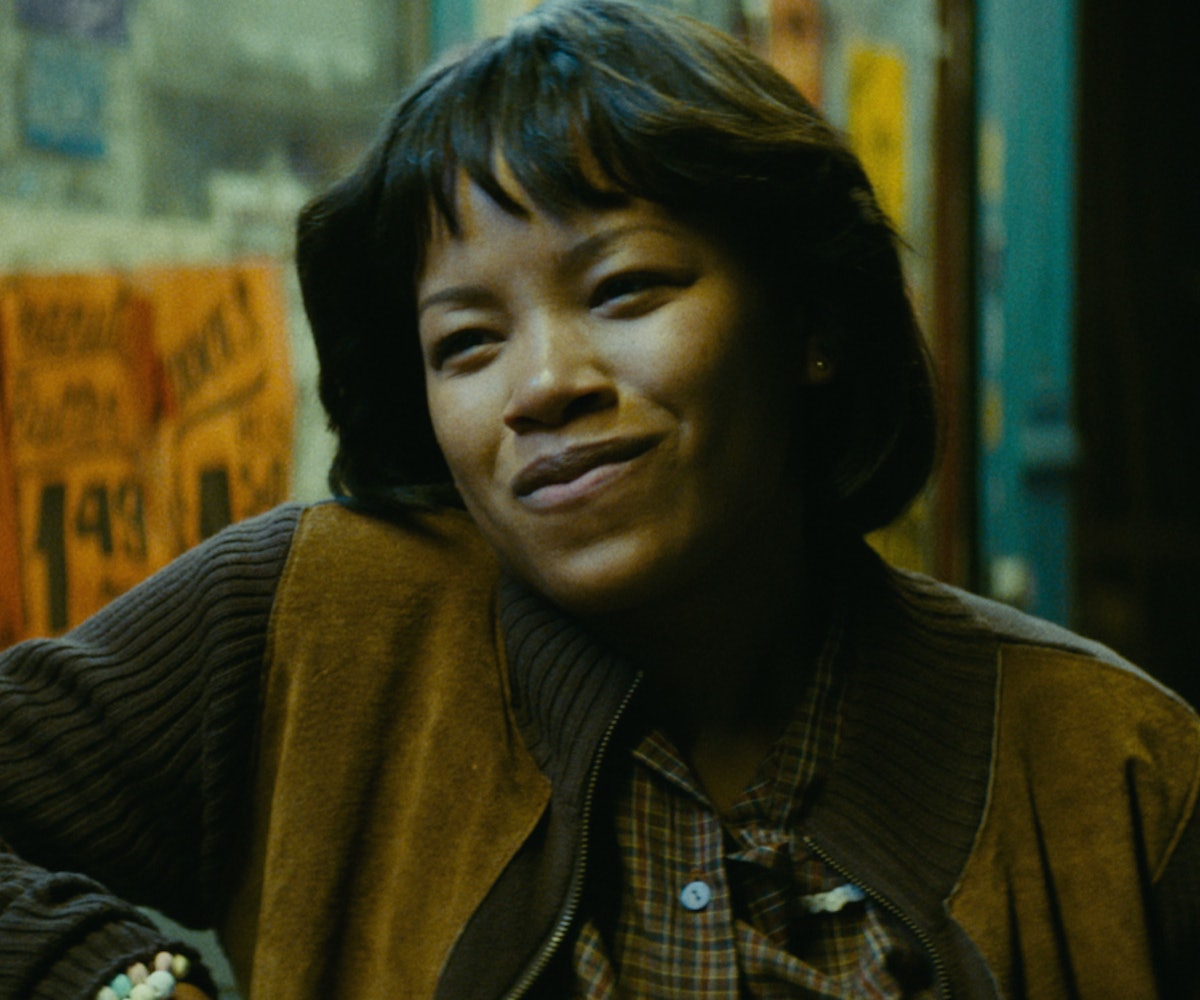 Chanté Adams was one of the most talked about actors of Sundance 2017, thanks to her breakout role in Roxanne Roxanne, which premiered at the festival last year and comes out on Netflix tomorrow. The biopic, about Roxanne Shanté, centers on the rapper's life as a 14-year-old in the Queensbridge projects of Long Island City in the early 1980s. Her uncanny talent and quick rise to stardom takes a narrative backseat to the violence of her personal life—she was raised by an abusive mother and had a child with an abusive man—and the film paints a rich portrait of what it was like to achieve stardom from such a rough beginning.

The film’s success largely hinges on Adams’ performance, which is electrifying. It’s the kind of debut that marks the advent of a very exciting career. So, who is she? Originally from Detroit, Adams started acting in student plays at 13, and “fell in love with it.” She continued to act on a small scale throughout high school and college and then got her big break: She was cast as Roxanne just a few weeks after graduating Carnegie Mellon’s acting program. Just one week later, filming began.

I sat down with Adams in Park City last year to talk about the film and her experience making it. In the year since, the world has changed considerably. MeToo, for one, has gone from a trending hashtag to a movement, making the film’s portrayal of domestic violence feel all the more relevant to today’s conversation. Most of all, though, it’s a story of female resilience before women’s empowerment was culturally prioritized.

Read our conversation about Roxanne Roxanne, below.

You started filming this just one week after being cast. What was that like?

Very hectic and stressful. You know, I was so grateful to be a part of the project, but, at the same time, it was like a week to prepare for my first film ever. I wasn’t very used to film. I went to a very theater-intensive school; you take a camera class here and there, but nothing to the extent that would prepare me for getting a lead role in a feature film five weeks after graduation. [I did] lots of research, watching videos and interviews. I met with Shanté before I got to listen to her and hear her talk. I was still learning as we started on set.

How was it different from the theater acting you had previously done?

Me and [director Michael Larnell] would have a little rehearsal before we started filming, just because he understood that I came from a theater background and film is a different beast. It takes a different type of acting. So, he would record me on his iPhone doing some of the scenes, and then let me watch them so that I could see what he was saying and make those adjustments that were needed for the camera. You can’t act as big as you usually do on stage when the camera’s this close to you. So I had a week to get that down.

Were you familiar with early ‘80s hip-hop before this?

A little bit. I’m the youngest of four, and I’m 22, so I have older siblings who love ‘80s and ‘90s hip-hop music. So most of my knowledge about the era came from them.

Were you familiar with Roxanne Shanté’s work?

I’d heard a few of her songs and I knew of her, but I never knew who she was. I didn’t know what she looked like until I got the audition and did the research and looked her up and was like, "Oh my god, we kind of look alike."

What was it like the first time you met her?

Nerve-racking. I could hear her coming down the hall, like as I was sitting on the couch before I saw her, and I was studying her so much that I knew her voice as soon as I heard it. I just remember my heart beating really fast and her coming around the corner and giving me the biggest hug.

Had you rapped before doing the film?

Not in any type of professional way. I grew up in hip-hop, a different era, and a different generation. It’s always playing on the radio. It’s what my siblings listen to. So anytime I’m around them and my best friends, it's just, I mean, it’s my music. It’s my culture.

There were some violent scenes in the film that were pretty hard to watch. What was it like filming them?

Draining and exhausting, but so rewarding. I learned so much from it, and I owe it to the team I had around me and my producers, which allowed me to dive into the character as much as the film really needed me to. It was hard. It was difficult. But I just tried to stay as committed as I possibly could.

I think the most powerful moment for me was the three-scene transition, from the first time the character has sex and is screaming, and then the scream carries into the next scene where she's giving birth, and then another when it's a scream of being abused. It was so intense. How did you get into the headspace to do that?

It was really just taking the time. I spent a lot of time prior to filming, really mapping out the script and mapping out the different [parts], how old she was and the things that she was going through at this age, because she’s a very different person to who she is in the film. Her main priority in the film at the beginning is being a big sister and making money by battle rapping. But things change once some things happen with her family and her mother changes and she takes on a different role. So even though she’s still 14 at that age, when's she's grown, she’s grown as a person and she’s grown wiser and she’s going through a lot of things that grown women go through. As a teenager, all she really should be worried about is school and boys, but she’s trying to help raise three girls and balance a relationship with someone who’s 18 years older than her. So it was really remembering all of that before we start shooting that scene. That’s what helped me the most.

I mean, you almost forget that the character is so young. Like when she blows out the 14 birthday candles, it’s like, "Oh my god."

Yeah, and so that was important, you know, keeping that innocence. Because it’s still there, even though she’s going through all this, “grown-up stuff,” I guess. Like she still has the innocence of a 14-year-old and just wants to blow out the candles on her birthday cake and celebrate and dance and be a kid, and she says that. Like all she really wants is to be able to enjoy her childhood before she actually has to embark on this journey.

Totally. And that tension, the way you portrayed it, was so amazing because it’s like the whole film, I feel like she’s insisting that she wants to be grown and then admits it at the end. That was so powerful.

I mean that’s the story of every teenager. During that time period, we all wanna be grown and all we wanna do is, like, be out of the house, and everything like that. But she got to experience what that was like and how hard that was. And so, at the end of the day, all she wanted was that back.

Now that people are seeing the film and talking about it, what’s your biggest takeaway from this experience?

My biggest takeaway, I think, comes from Shanté herself and just knowing her as the person she is today and being able to live in what she went through during that time period. And I honestly don’t know how she is the way she is now, one of the most beautiful, inspiring people I’ve ever met. But you know, she’s the definition of, "You don’t have to look like what you went through." And I so appreciate her for that and I just always remember, no matter what struggles or adversities that I’m going through, there’s a better tomorrow waiting for me.

Roxanne Roxanne is available for streaming on Netflix on March 23.