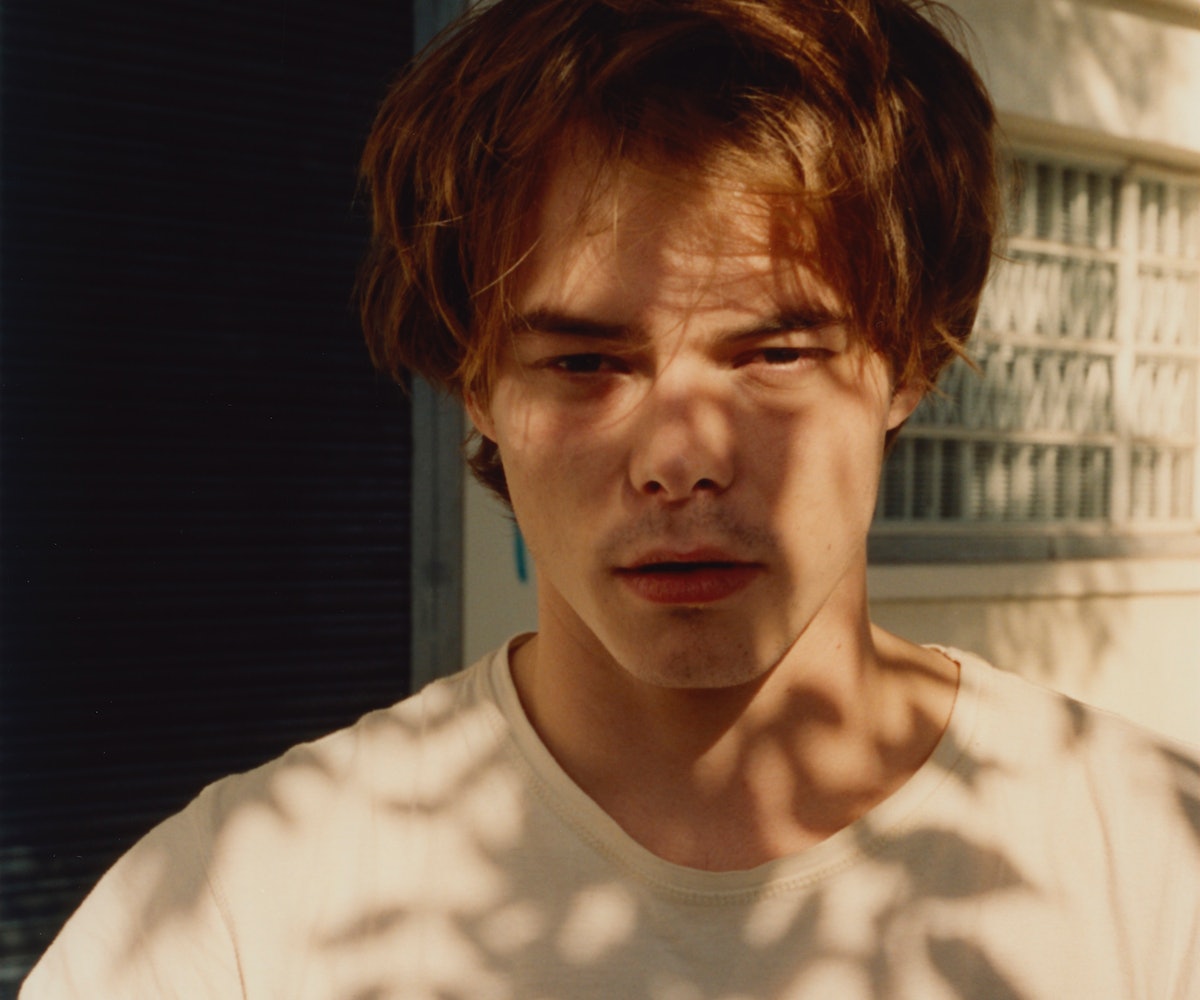 Heads turn as Charlie Heaton takes a seat across from me at a tiny North London café. Teenagers at a table behind us whisper animatedly before one works up the courage to turn around and ask Heaton if he’s actor Matthew Modine. It’s a rather unexpected case of co-star mistaken identity, but Heaton politely replies that he is not. The teen probes further: “You’re also from Stranger Things, though, aren’t you?” “I am,” says Heaton, “but I’m Charlie. Nice to meet you.”

There’s an air of humility and awkwardness about the interaction that doesn’t fall far from a scene starring misfit Jonathan Byers, portrayed by Heaton in the aforementioned hit Netflix series. “When I read the script there were a lot of [parallels],” says Heaton. “Jonathan comes from a humble background and a single mom; I also have a single mom. Jonathan is someone who had to go through adolescence very quickly and grow up much faster than his peers, which makes him the outsider. I think many people can relate to Jonathan.”

Raised in Bridlington, a small town in northern England, Heaton moved to London at age 16, and spent a couple of years playing drums in various bands. After returning from tour broke and badly in need of a new gig, Heaton took his sister’s advice and joined a commercial casting agency. “I literally just went to a casting for the day, joined the agency, they got me a commercial in Switzerland, which won a Cannes [Lions] award, which got me an agent,” he recalls. “I did a few things in England and then I went to L.A. I booked this movie [Shut In] and it just snowballed from there.”

Indeed, even though Stranger Things may have been Heaton’s first claim to fame in the eyes of the public, it was landing his role as Stephen Portman in the recently released psycho-thriller Shut In that represented his true Hollywood breakthrough. And it all happened without any formal acting training. Although, as Heaton explains it, he’s done plenty of real-time learning on set with his castmates—and he has particularly lucked out in the on-screen mom department. During his young career, Heaton has worked with two of the industry’s most renowned leading ladies: In Shut In it was Naomi Watts, whom he knew “mainly from King Kong,” and in Stranger Things it was ’90s legend Winona Ryder. “[Winona] gives everything to her role emotionally,” gushes Heaton. “It’s so beautiful to watch how vulnerable she can be on camera. [She taught me] to accept my vulnerabilities, to not be afraid to do that. She’s an icon. [For me] to come on set as a nobody and have Winona really take me in and be caring and giving, it was beautiful.”

Of course, in addition to his on-set education, Heaton does his homework. Take, for instance, his preparation for Shut In. As the film’s narrative goes, a fatal car accident kills his character Stephen’s father. Stephen survives the crash, but in a vegetative state, leaving his mother to care for him 24/7 in a small, isolated town. So, how does one get ready for such a somber feature-length debut? “I watched a French movie with a guy in a vegetative state and read up a lot about what symptoms they have,” he says. “I looked at a lot of really sad videos online. There’s nothing going on behind the eyes. There’s no communication. It was physicalizing that. I spent a lot of time just doing nothing. But it’s hard to talk about this movie, I guess, because there is a lot more to it than that.”

It’s true: As the story unfolds, Watts’s character takes in another child (played by Room’s Jacob Tremblay), who then goes missing, and the plot thickens. On the surface, it actually sounds rather familiar, doesn’t it? “Well, it’s much darker than Stranger Things. It’s scarier,” Heaton notes. “It’s about this mother’s guilt about her son and this missing kid. There are things that go on inside the house, and a huge twist at the end.”

As we finish up our brunch and prepare to part ways, I figure I would be remiss not to try for some Stranger Things season two insider hints. “Everyone’s asking and we’re like, ‘Seriously, we don’t know anything!’” Heaton replies frankly. Guess I’ll just have to wait.