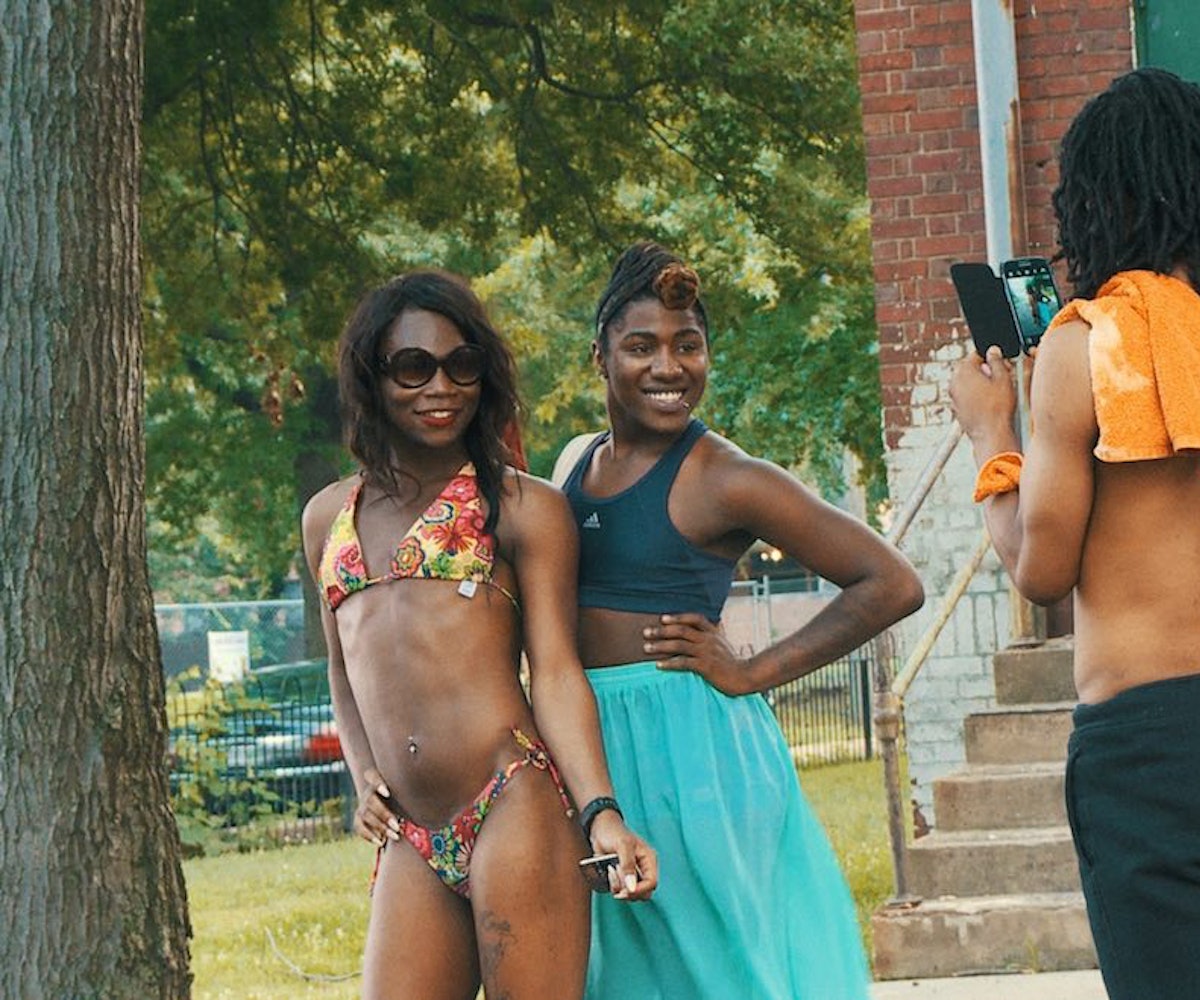 Photo courtesy of The Check It

In 2009, a group of LGBTQ youth formed The Check It, Washington, D.C.’s first well-known gay gang. What started out as a small group of young people tired of being bullied for their sexual orientation and gender identity grew into what is now a crew of more than 200 people ranging from ages of 14 to 22. With the group’s core network located just miles from the White House, it may seem surprising that it takes starting a gang to get protection and support in the nation’s capital. But homophobia is rampant in D.C., and for those who are the most marginalized—primarily poor, queer, African-American youth—discrimination is just one barrier to survival.

Having recently premiered at Tribeca Film Festival, Check It is a documentary that transgresses identity politics to uncover how those who are most vulnerable under the state’s inadequate welfare system work to support each other. Following crew members Tray, Day Day, Alton Star, and Skittles, documentarians Dana Flor and Toby Oppenheimer show their transition into young adulthood and how, with a little bit of help from well-intentioned mentors and primarily, each other, the kids are able to find a little bit of hope while struggling to survive in some of the poorest and most violent areas in the country.

How did you find out about The Check It?

Toby Oppenheimer: My partner Dana Flor and I spent many years making a film in D.C. called The Nine Lives of Marion Barry. We spent years in the poorer parts, mostly African-American sections. One of the people that we met was Ron Moten, also known as Mo in the film. Dana was hanging out with him, speaking to him about a film we had been playing with on go-go music. And he said, “Oh, that’s great but y’all should meet a group of kids I've just started working with. They’re called The Check It and they’re a gay gang, and they’re putting on fashion shows.” So, Mo and five of the leaders met with us, and we sat with them at Denny’s and we explained that we were interested in making a documentary film and kind of what that entails, and they said, “Alright, you can come hang with us.”

Was it hard to convince the crew members to let you film them?

TO: We spent maybe four to six months with them without a camera, just kind of hanging out. Early on, they did everything they could to make us hate them, to make us go away. These are kids that had every single adult in their lives, to some degree, let them down or disappoint them. That could be their parents, their grandparents, their teachers, church leaders. That’s who we were to them. We found out recently when we did all of these interviews, after the Tribeca premiere, that they were testing us for months. They would be like, “Alright we’ll meet you here,” and we would go there and they wouldn’t be there. We didn’t think it was very calculated, we just thought it was representative of the chaos and tumult that they were dealing with every day. But no, they were planning that. They would be very nasty to us, but we were always very calm and accepting of it, and they ended up liking that.

In the film, The Check It doesn’t really come across as a gang, but rather as a crew of troubled kids trying to make it in a city with very little support for marginalized youth. Were the kids already moving away from the crew culture when you started filming?

TO: Yes and no. I can honestly say now they are. When we first saw them, they were literally on the precipice of adulthood. A lot of people trusted us, and [Moten] believed that having us there—and he was right about this—was yet another kind of kick in their ass to stay away from that kind of stuff. In the film, there’s basically three mentors: There’s Ron Moten “Mo” and there’s Duke, the boxing trainer, and there’s Jarmal, who runs fashion camp. That was kind of what they needed to stay on the right path, to stay in their jobs, to go to their GED programs, to go to their therapy sessions.

I found some of these mentors to be problematic. For example Duke, the boxing coach, refers to Skittles as a faggot, suggesting that he needs to “man up” in order to survive. How did you feel about that relationship?

Dana Flor: It was very important for us to show how homosexuality is dealt with in the black community, and Duke was an amazing guy. He’s out there to help Skittles in any way he can, but yes, even the ones with the best intentions still have these belief systems. The black community is not welcoming to the LGBT community, at all. For example, Mo and all the kids put on a big fashion show the week before Tribeca, and they reached out to all of the different LGBT groups in D.C., which are primarily white, for support, and literally everyone said, “We can’t make it.” So that’s what we want to do with this film, put a mirror up and say, "You know, you need to help these kids too."

In the film, we don’t see a lot of violent acts. Is it because The Check It is less violent than other gangs, or were you just not wanting to focus on that aspect of their lives?

DF: In D.C., we call them crews, not gangs. Crews are different from gangs in that they usually spring from neighborhoods. They are kids who, for instance, come from the same block, the same schools, and who have grown up together. Crews can be violent and criminal, or not. They also just might be a group of friends. So, The Check It is both similar to other gangs or crews in D.C., and totally different. They are similar in that they have come together for survival, to find protection, and to get some basic needs. They are different because they came together to protect themselves from abuse inflicted on them because of their sexuality. The violence that you see in the film I think is a fair representation. You see that they are prone to be in situations of conflict, and you also see them lashing out. But now, a lot of The Check It [members] are older and working hard to make positive changes in their lives.

TO: You only capture what you capture. It wasn’t that we were in any way hanging out waiting for a fight. We were just hanging out getting to know them and just capturing who they are, and we just loved being around them. They are incredibly funny, smart, bright, charismatic, and energetic. That’s obviously one of the reasons why we wanted to make this film; they are such brilliant cinematic figures. And then the more we went deeper into it, the more we realized how incredibly alarming the issue is in their everyday lives, and how their group is basically ignored by governmental services. We felt like this story, of these kids who are the most marginalized of the marginalized, needed to be told. In a sense, we had to shame the city to take a look at what’s going on a mile and a half from the White House to kids. What they need more than anything are more services—more wraparound services, work programs, therapy, medical issues.

How has the film impacted the community in D.C. so far?

TO: We’ve been in cahoots with the mayor of D.C. and the police department, and they are coming out in full support of this film. They want this film to be a vehicle to assist in getting these programs installed in these districts. Because it’s not just D.C. We did a crowdfunding campaign last year and we got word back from hundreds of people around the country who were talking about groups of kids just like The Check It. Clearly this is happening everywhere, and we are hoping that we can first focus on D.C. and then use that template from city to city if possible.

What changes do you hope to see come out of this film?

DF: We feel so gratified that even before our film is really out to the world, it is already stimulating positive change. Because some of the members of the D.C. government's LGBTQ office came to a rough cut screening, the city is now creating programs to train The Check It as outreach workers, reaching out to other kids like them to provide support and resources. The D.C. Metropolitan Police department is using our trailer in their LGBTQ sensitivity training program. But beyond local reforms and programs, we hope that our film will create an awareness and support for The Check It and for kids like them worldwide, because there are groups of kids like this across the globe who are in great need. We hope our film can be a vehicle for dialogue and change in communities, schools, and churches. We hope that people will support the Check It by buying their products. We hope that The Check It can be a model that can be reproduced in other cities. And of course, we hope that our film gets as many viewers as possible.