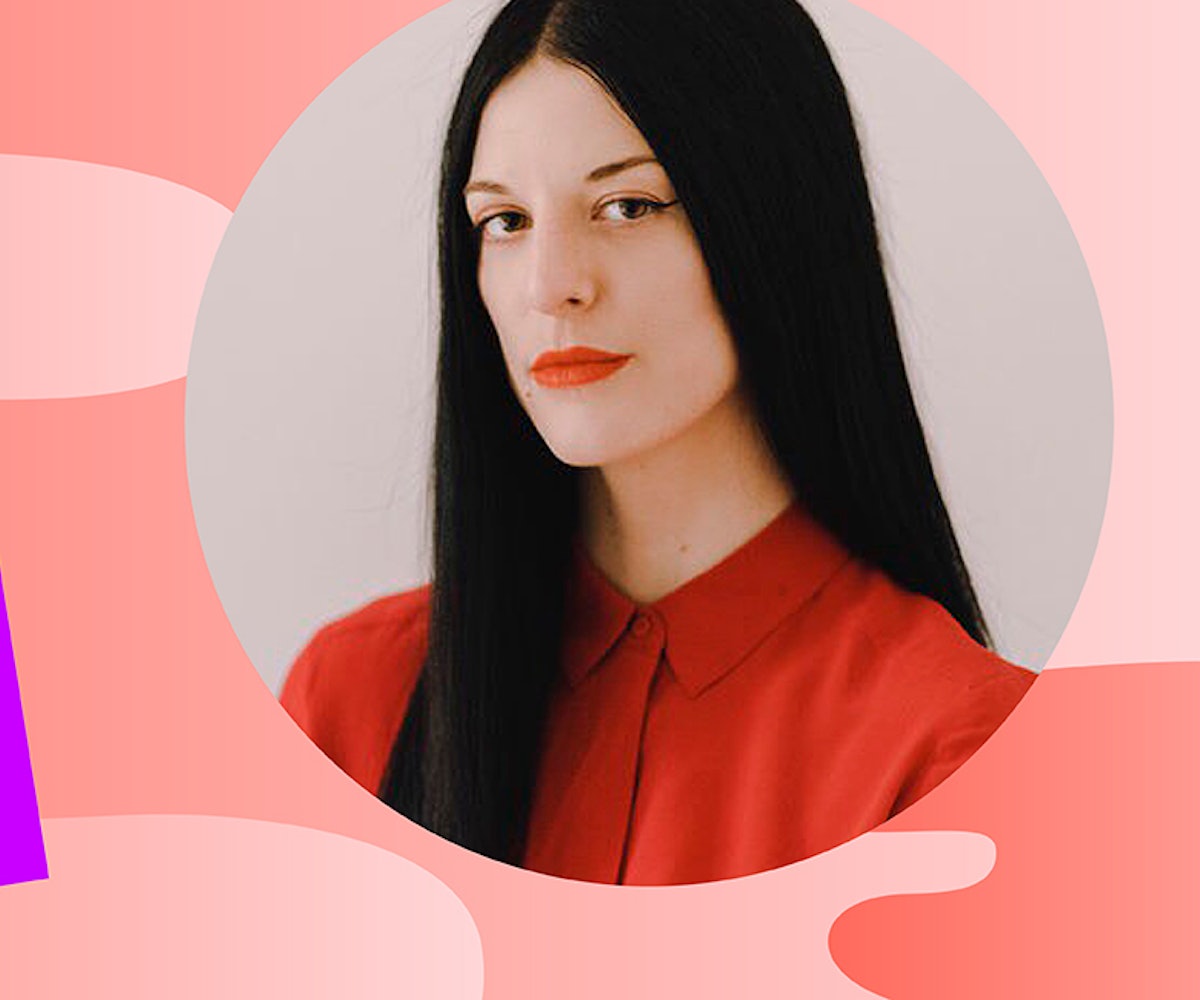 "It's an honor to be so distracted, so consumed, to leave my mind"—Chelsea Hodson, Tonight I'm Someone Else

An hour before I met Chelsea Hodson, the sky over New York was cloudless; a tight, thin, white-blue membrane over the city, the kind that makes it easy to forget that, basically, there are infinite miles of darkness beyond it. But by the time we entered a restaurant in Chinatown, choosing a table right next to a wall of open, floor-to-ceiling windows, the sky had shifted into something heavy and low and gray. And at the exact—or close to exact—moment we sat down, a giant gust of wind swept in through those windows, clearing most of the restaurant's tables of their place settings and knocking down vase after vase of flowers, so that the floor was instantly covered in pools of water and recumbent white carnations.

This felt appropriate, as Hodson's debut essay collection, Tonight I'm Someone Else, recounts story after story of near-disaster, almost-destruction, "the possibility of ruin"; those times when you most realize the fragility of the world and your place in it. It also offers something else, a chance to look at the ways in which we avoid disaster, how we sometimes do so through mere chance, and other times, we survive thanks to something more innate, through our intuition. All to say, our table was one of the few that remained unscathed in those first few moments of the storm, before the windows were closed, and the rain really started to come down.

I'd had a semi-strange experience reading Hodson's book, in that I wasn't reading one copy but going back and forth between the two copies in my possession; I kept one in my bag and the other by my bed, and would pick up with one where I'd left off with the other, though it was always an imperfect exercise, because I read the same pages more than once, underlining different parts along the way, noticing different things in the same words, transferring my experience and energy, warping it ever so slightly, along the way.

"It almost lends itself well to the book," Hodson said to me after I told her how I'd been reading, "where these multiple selves exist, and there's all the doubling."

These multiple selves of which Hudson speaks are a key part of the quicksilver feeling of these essays, the mercurial slipperiness on the page, reflecting the lightning fast way the mind can conjure up a million different realities, all in the amount of time it takes for a stoplight to turn from red to green. Though these essays portray different parts of Hodson's life—from an intense, adolescent best friendship at a summer camp, to a part-time early job at a copy shop, to spontaneous moves to unfamiliar cities, to Hodson's boundary exploring work as a performance artist—they don't exist in any kind of chronological order, because, as Hodson explained to me, "It’s not what I’m interested in writing. I don’t need a neat beginning, middle, and end. I've always embraced both reading and writing in a more messy sense, that we can be both good and bad at the same time, or that something makes no sense and there is no ending. I’m excited about that ambiguity and mess."

That excitement about ambiguity and messiness is palpable on the page, only Hodson explores these maybe amorphous concepts with a crystalline lucidity, pulling abstract concepts into focus, as if life were one big magic eye poster, one wildly colorful blur that suddenly takes on a specific form once you've finally let your eyes relax. Her ability to find definition in chaos is, in part, due to the spare nature of Hodson's prose, which speaks to her background in both poetry and journalism (not normally two fields that merge, or merge so well), but also it feels reflective of her work as a performance artist, a medium grounded in spontaneity and reactiveness, something that seems deliberately at odds with the planned nature, the excessive editing and reparative aspects, of writing.

"I’ve been thinking a lot about how performance plays into writing itself, how the element of persona plays into writing essays," Hodson explained. "Even if I’m able to tune it out, deep down knowing that I want it to be out in the world someday, that changes how I describe something or look at something. That idea of doing something without performing is something I have to work on and practice."

It's interesting, of course, to think about performance in non-fiction, if only because so many people don't want to admit the role that perspective plays in the telling of truth—whatever truth means. One of the parts of Hodson's writing that resonates deeply is her refusal to participate in the notion that an essay needs to be a point-by-point recitation of facts; that it needs data in order to be honest. In playing with the idea of truth—among her lines I underlined most emphatically: "It seems I might be able to pretend anything into existence... It might be my greatest work: inventing the problems of my life"—Hodson subverts the traditional notion of the essay, and, in doing so, gets to some higher plane of understanding. She said to me:

The reader thinks everything is the truth, or at least as close to the truth as it can be, but then I’ll lift off into a very fictional realm, where it’s clear that it’s impossible. Like in "Pity the Animal," there’s a part where I end up on an island where there’s versions of myself on all-fours. I like the idea of these surrealistic images appearing within something that’s more straightforward or more devoted to the truth. You can definitely do that in fiction, but, for me, I’m more interested in blurring that line in something that, on the cover, says “essays," where I'm almost dancing in between these ideas.

This blurring of the truth is also something that feels distinctly feminine, a reminder of all the ways in which women are told that their truths, their experiences, are not the "real" ones, or at least not the ones that matter. "Facts" are often a synonym for the kind of terse recounting of events that have been a hallmark of the male experience, while "feelings" are those ephemeral things used to dismiss women who speak out about their pain and their fears. Female intuition plays a big role in many of Hodson's essays, and, she explained to me, she was interested in exploring the concept because she felt like she hadn't "yet read about that almost female intuition, that I feel like sometimes I’m able to tune into, where it feels almost impossible to describe, which makes it ripe to explore... I’m always interested in the leftover animal parts of ourselves. The things that are still present but were more important centuries ago, but that are still lingering in our bodies, even if they are no longer present all the time."

Another element of the animal self, something which has been, it feels, light bulb-ed and smart phone-d out of existence, is our innate relationship to time. Where once our bodies were attuned to some universal rhythm, we now have different ways of experiencing the cosmic patterns all around us. Hodson is aware of this loss, and of the ways in which time can stretch as long as a piece of taffy between ever-parting fingers—endlessly, until there's an end. She told me about the role she feels time played in an instance of her female intuition, when she realized that a man who had been stalking her at her job would not be doing so anymore: "Time almost slowed, it became something unimportant. Time felt amorphous, like, not linear at all. Time felt simultaneously super-short and like I’d been there all day."

And whereas many writers might fear exploring something so ambiguous as that within the realm of an essay, Hodson had no such qualms, and told me: "I like the way nonfiction can mess with that, where you can have one second last 10 pages. It seems so ripe for literature." She explained to me that this type of exploration of the temporal is one reason that "there’s a lot of driving in the book," because it lent itself to "all this empty alone time in between all these moments of heat."

This, then, is what Hodson does with real artistry, sliding back and forth between the quotidian languorousness of life and those electric crackles of enlightenment, those times when we feel like we've seen beyond the veils, lifted the mask from our eyes, and discovered the way things actually are. The world will doubtlessly blur again, and we'll need to go on searching for new experiences that offer that same electrifying sensation, that opportunity for enlightenment, but we'll know those white-hot moments are out there. And we're lucky to have Hodson writing about them; as she told me not long before we headed back out into the yellow-gray world of a post-storm New York, where everything was cooler and wetter and softer: "There’s a lot more to be written about women’s desires in particular. And there’s space for me to contribute to that... I’m interested in documenting these moments of heat."

Tonight I'm Someone Else is available for purchase here, starting June 5.

NYLON uses affiliate links and may earn a commission if you purchase something through these links, but every product chosen is selected independently.