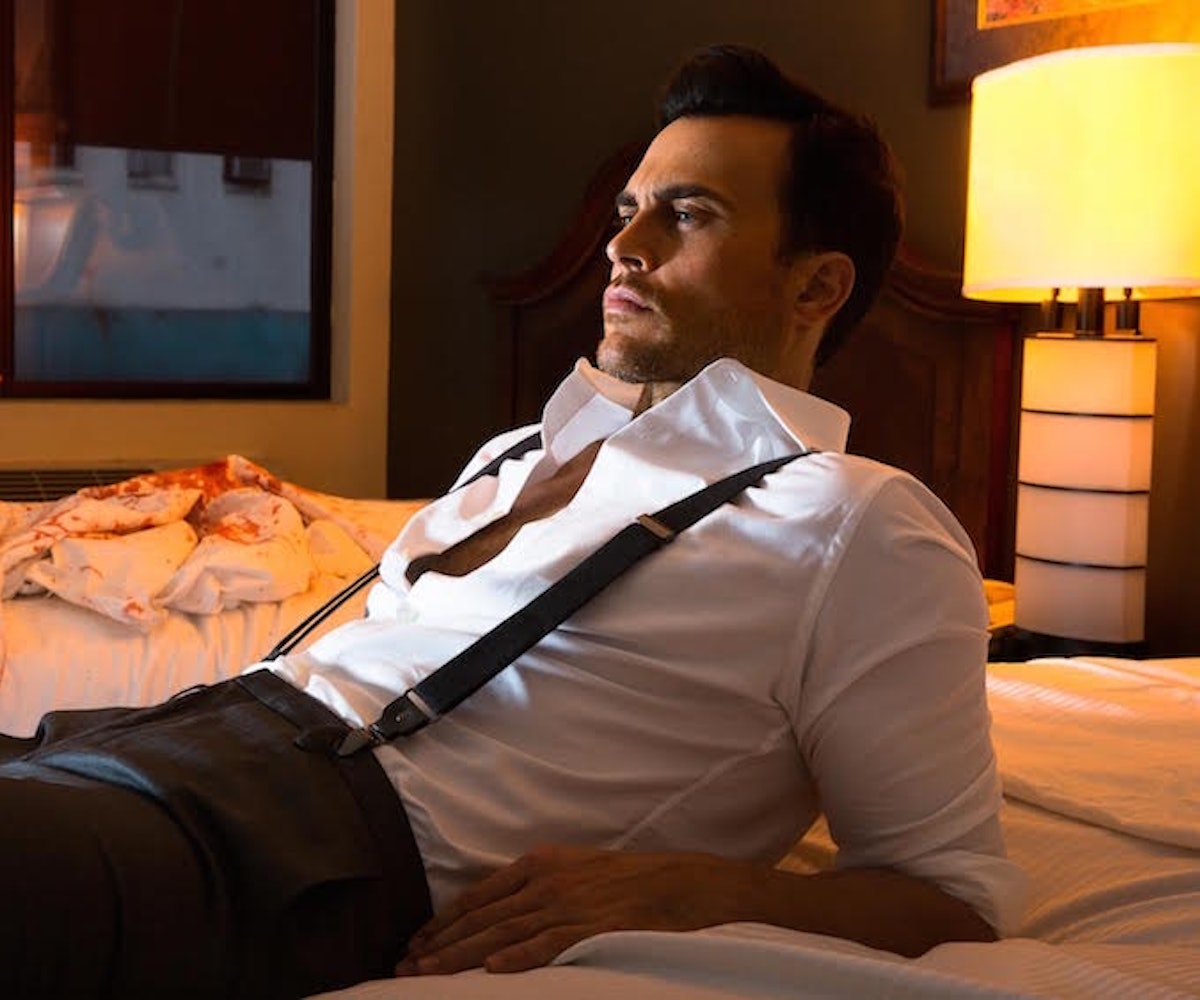 After a countdown lasting months, everybody's favorite terrifying TV show is back—and this time around, there are some new additions to the family. American Horror Story: Hotel has checked Cheyenne Jackson in to Ryan Murphy's creepy cadre of actors, and judging by last night's premiere, he's game for what may just be the show's most bonkers season yet. Playing a wealthy fashion designer named Will Drake, Jackson has fully embraced the anything-goes attitude of AHS, working on scenes with Lady Gaga and rocking what's bound to be one of the greatest wardrobes in the show. We spoke to the actor about horror films and what to expect this season from Hotel.

You previously worked with Ryan Murphy on a couple episodes of Glee. How was this experience different?

It’s the tone of it. There’s obviously less singing and dancing, so that makes it pretty different. Ryan is just one-of-a-kind. His mind is so brilliant and amazing, and what’s fascinating is that he can do both of those genres and absolutely nail them. What was similar is the energy on set and the fact that he’s doing something special. I was in the second season of Glee when it was at its most popular. How it’s different is that it’s American Horror Story—it’s dark and moody and intense and dramatic and sexy. It’s a different world, and the stakes are high and everybody on set is bringing their A-game, so it’s definitely a different world than Glee.

How did you get involved in Horror Story?

I’ve been friends with Ryan for a few years. Initially, I auditioned for Will Schuester on Glee and obviously didn’t get the part, but he remembered my audition and that’s how he got me on that show. Then he hired me to be on this pilot last year for HBO, which ended up not going. So I think he was just always looking for something great for me, and he asked me about a year ago and he said, “I have this wonderful part, but would you be interested in joining this sort of family?” Uh, yes! I would!

Are you a big horror fan?

I really am. I never really thought about it. It wasn’t something that I sought out, but I really do love it. I love to be scared. I love to put myself in those situations. The very first scary movie I saw was accidental—a babysitter let me see The Shining when I was was seven. I remembered that exhilarating feeling—the peril and the life-or-death situations. I’d just get goosebumps. It’s really fun to live in that world. I am a fan, and I’m a huge fan of this show. I’ve seen every episode and I’ve seen a couple seasons twice. So, being on that sound stage and being such a fan made it doubly exciting.

Do you think that this experience acting in a horror show will change how you view scary movies?

I don’t know about that. Because when we’re shooting it’s not scary. But when everything is put together with the music and the special effects and all that. I don’t think it will.

So you mentioned The Shining—do you have any other favorite horror movies?

What was your favorite season of AHS?That’s a good one. It’s so tough.

They’re all so different.Yeah, they really are. I’m gonna go with—I like the first one. I like the first season, with Freak Show being a close second. Actually, Asylum. I’d say season one and then season two is my second favorite.

Each season also has a different kind of scare tactic behind it—in what way is Hotel scary?Hotels are innately spooky, just because of the stranger factor. Just a thin wall separates you and the people next door, and the people downstairs have the keys to your room. There’s just a sense that it’s very temporary. This season, the things that we deal with are—there’s loss, there’s fatherhood, there’s addiction. It’s not a scary-monster-under-your-bed type thing. These are things that are real and affecting people, so you can really put yourself in the situations. To me, this is the scariest season. Obviously, I’m biased because this is my first one, compared to the people who have been in all four seasons before. But this one definitely feels the creepiest.

Granted, there are some new people this season, but what was it like working with people who have been doing American Horror Story since the first season?There actually aren’t too many new people. It’s mostly just me and Lady Gaga. It’s a daunting thing. I’m not going to lie. It’s a thing that’s so popular and so beloved, and everybody has an idea of what it’s supposed to be. You just really have to make sure you do your homework. You have to make sure that you are game. It’s such a big, fun, dramatic, over-the-top type show. You’ve got to make choices and you’ve got to hit the ground running.

What was it like working with Gaga?So great. She’s so great. Everybody asks me, and I wish I had something better to say than just “amazing,” but she’s the coolest girl. She’s everything you’d want her to be. There’s the star and the icon and all that, but really, once that is stripped away, how she walked in on set, you can’t see that. She asked me to call her Stefani. She’s this great, 29-year-old actress. She reminds me of my theater girlfriends. She’s cool, game, wanting to be her best, does so much research, works so hard. She knows her lines cold. I’m really impressed, and it was fun getting to know her and becoming friends. It’s been so fun.

All photos by Myles Pettengill

And you’re both singers—was there any dueting on set?Yeah, we’ve actually sung along a little bit. She’s so fun and musical. The other day somebody came over, our script supervisor, and was like, “I want you guys to sing!” So we busted out a couple songs together. She’s so fun. There’s no bullshit with her. She’s the type of person you can just hang with.

Your character, Will Drake, is a fashion mogul. What was your wardrobe like on set?My wardrobe is insane. We’re only halfway done with the season, so every day I get to set and look in my trailer, and I can’t believe the stuff I get to wear. Sometimes things that aren’t even in the shot, like shoes. I had Prada shoes the other day. I’ve never worn Prada shoes. It’s amazing. Just everything fit so perfectly and is thought out so well, and Lou [Eyrich] and the shop who does the costumes are just beyond. There’s a reason why they’ve won Emmy after Emmy. I feel super-spiffy.

And how would you describe your personal style?I like pretty basic. I don’t like things with a lot of labels. I’m pretty tall. I just like to have things that fit me really well. I don’t like things that are too tight. I would say “outdoorsy,” so I like stuff that I can wear all throughout the day. But it is fun to play someone who’s fashiony, because it gives me a chance to try on that for a bit.

Were there any real-life fashion moguls that you looked to for inspiration for getting into your character?Yeah, I’m friends with a few designers. Kenneth Cole is a dear friend who went to my wedding. Michael Kors has been a friend for a long time. Playing someone like that I can definitely take a little bit from this person and that person. For sure.

What was the most exciting moment of this whole experience?I would say [the Los Angeles premiere on] Saturday night. Saturday night was the first time I saw it. We shoot all over two different sound stages, so the cast never really gets to be together at the same time. So Saturday, we really all got to be together in one place, watch it together, and be scared and excited and really appreciate everyone else’s work and what everyone else was doing. That was fantastic. I’m glad I got to see it before tonight. My brother- and sister-in-law are coming over and we’re going to watch it.