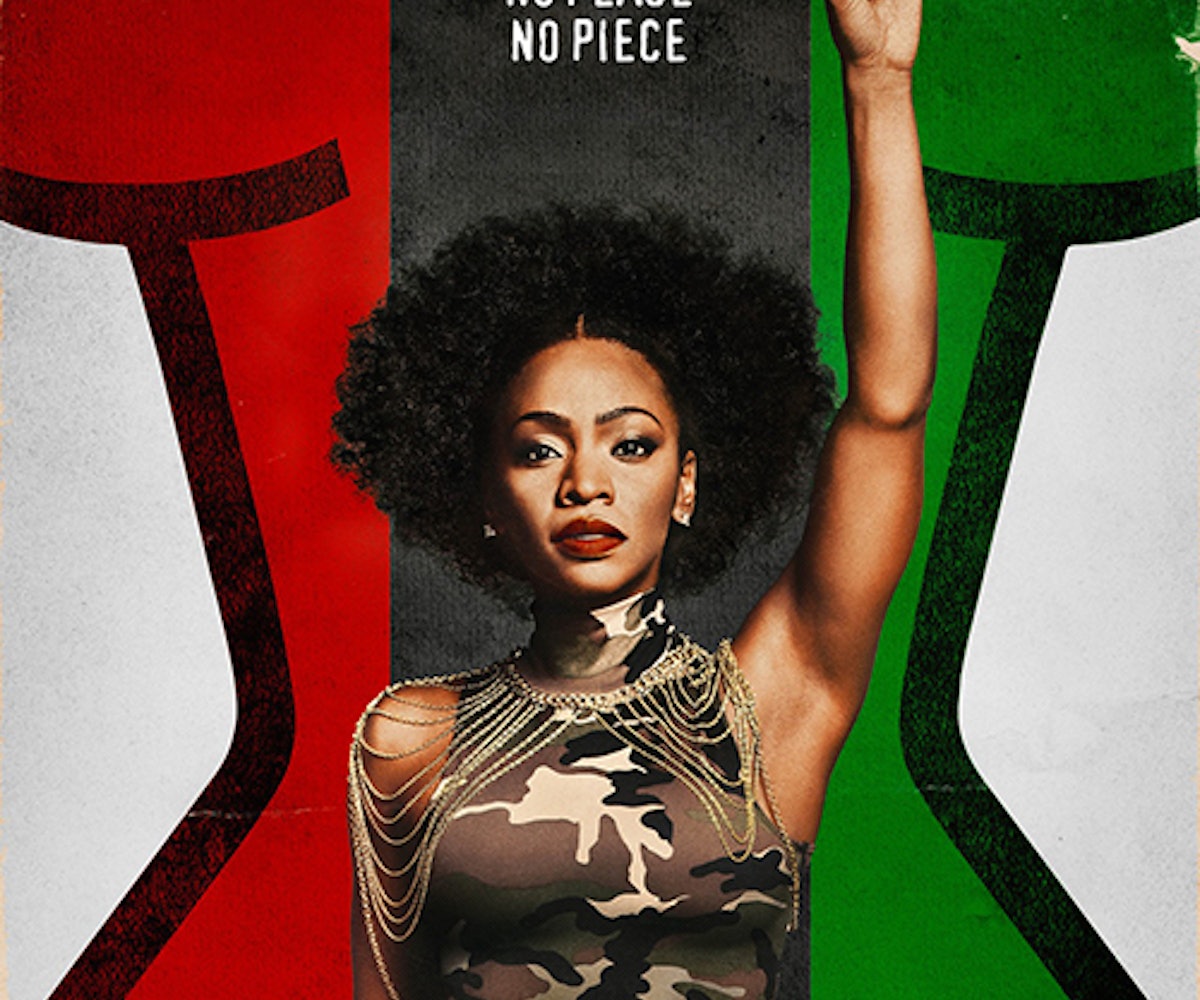 Photo via 40 Acres and a Mule Filmworks.
fb
tw

From the moment we heard its title, Spike Lee’s Chi-Raq has induced immense amounts of controversy that only intensified as today’s release date neared. Now that the movie is out, it’s proving that it’s deserving of criticism—but is still worth the watch.

Chi-Raq borrows from the ancient Greek comedy Lysistrata, in which the titular character encourages women to go on a sex strike as a means to end the Peloponnesian War. Lee’s take posits Lysistrata (Teyonah Parris) in the South Side of Chicago. Her boyfriend Chi-Raq (Nick Cannon) and his gang of not-so-cleverly named Spartans have been terrorizing their city with gun violence as a result of their beef with the Trojans, led by eyepatch-wearing Cyclops (Wesley Snipes). When she witnesses a mother’s (Jennifer Hudson) gut-wrenching response to her child being shot by a stray bullet, Lysistrata has had enough, and leads women across the city (and eventually around the world) to “deny all rights of access or entrance”—you know, sexually— until their partners put down their guns.

At its surface, the concept of the movie is pretty intriguing. Instead of a straightforward, aptly depressing depiction à la 12 Years a Slave and Selma, Lee opted for an artful take that intended to entertain, but also incite conversation. (And who better to take on such an overwhelming project than he, whose résumé boasts a film like Do the Right Thing, a dramedy that is still brought up in conversations about police brutality 26 years after its release?) Yes, the trailer was met with criticism, especially by those who were made uncomfortable by the satirical depiction of the sensitive subject matter amidst Chicago’s bloody climate—but discomfort breeds conversation and awareness, and thus action and change, right?

Not quite with Chi-Raq. Although the film is well-researched and does address a host of sociopolitical issues (gun control, institutional racism, capitalism, misogyny, women’s sexuality, respectability politics, fetishization, you name it), opportunities to inspire thoughtful conversation take a backseat to the film’s distracting flaws. While an element of Lee’s directorial signature is that he does a lot in his films (e.g., School Daze’s Jane, who licks her lover’s scalp in a sex scene as a symbol of her infatuation with “good” hair), in Chi-Raq, he does too much. Case in point: The Lysistrata inspiration is laid on thick. Real thick. So thick that, not only do the gangs and some of the characters have the exact same names as their ancient Greek counterparts, but the dialogue breaks into rhymed verse that only works well a select number of times. (There’s also an uncomfortably long scene in which an elderly war general is wearing nothing but shoes and Confederate flag undies as he gyrates on a cannon and professes his fetishized interest in Lysistrata—a textbook case of Lee’s tendency toward “the most.”)

There’s a far greater issue that underlies the film, however, which is that Lee simultaneously satirizes and supports problematic stereotypes. He pokes fun at the Great White Savior™—John Cusack’s Father Corridan—by having him lead an entirely black congregation with generous use of “we” and “us,” but it is Corridan who is the most knowledgeable about institutionalized prejudices and experiences that don’t affect him firsthand. Lee also hypersexualizes the black women in the film as a jab at a society that does the same, but once the sex strike gains momentum, the idea that these women have the “power of the pussy” implies that their only power is in their pussy. That they, at their most strong and competent, merely amount to a part of their anatomy. And while the petty rivalry between the Spartans and Trojans is humorous, the depiction of lazy, good-for-nothing black men hits way too close to real-life stereotypes in the media, and undermines the mental and physical destruction of gang violence. Lee does offer answers to these problems (like with Angela Basset’s well-read character, and a wheelchair-bound, depressed former gangbanger), but they’re haphazard and shallow. There’s a thin line between satire and mockery, and his dance between the two throughout the film creates a messy situation.

But therein lies the reason that Chi-Raq is worthy of being watched: The situation that the film depicts is messy. Chicago’s gun violence is both a cause and effect of a conglomeration of poverty, gentrification, internalized inferiority, institutionalized racism, and a disregard for the lower class, which can’t be amended easily. Lee doesn’t actually believe that a sex strike is the answer, but he gets us talking about why existing solutions—or, rather, the lack thereof—are failing, even if these conversations are initiated by critiques of his own  movie. This is no historical drama that allows room for viewers to say that we’re in a post-[insert civil rights issue here] world; Chi-Raq depicts a current issue being faced by low-income minorities that is in desperate need of fixing. So, yes, you may question, cringe, and shake your head while watching Chi-Raq, but you’ll also laugh, cry, and—Lee’s signature phrase—wake up.