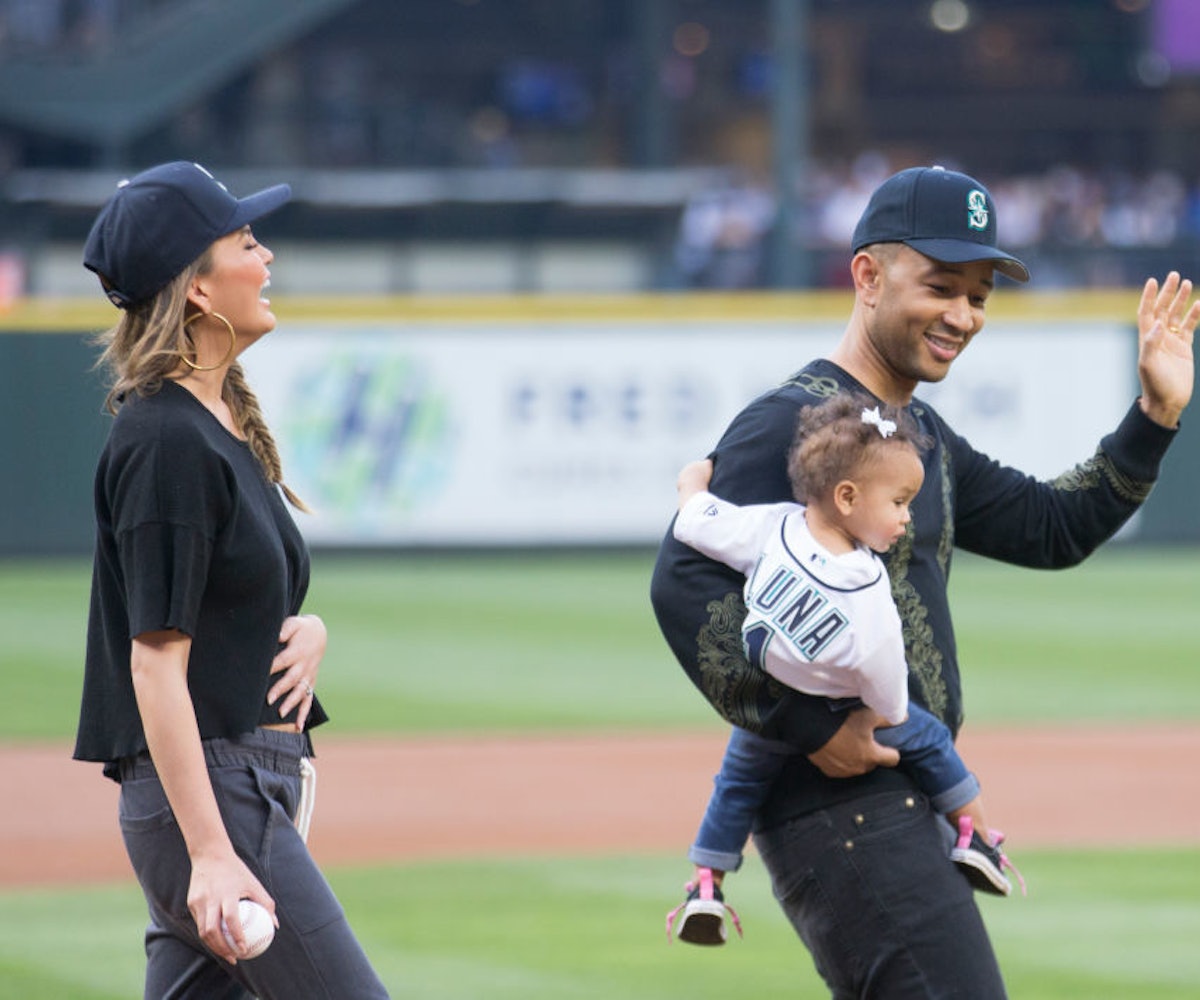 It looks like we couldn't make it through 2017 without Pizzagate coming back to haunt us. And it's gotten much, much weirder. Now, Chrissy Teigen and her husband John Legend have been accused of being involved in a Hollywood pedophile ring, and it's apparently related to Teigen's recent flight debacle and the fact that she used a pizza emoji. We can't get out of this year fast enough.

"I debated saying something about this but I’m pretty disturbed over here," Teigen tweeted. "The fact that there are people with these...thoughts...is really scary." She posted several screenshots of people discussing her daughter Luna's Halloween costumes and analyzing Teigen's emoji choices. There's even speculation that Teigen and Legend are transgender and lying about it? It's honestly too confusing and full of the conspiracy theorists' jargon to even follow.

"...apparently dressing my daughter as Alice in Wonderland and a hot dog and having a pizza emoji on Snapchat has to do with pizzagate and being uhhhh darksided," Teigen continued. "Holy shit. That thread is wild. Enjoy."

When some people tried to tell Teigen that this was "just Twitter," she pointed out that the woman accusing her and Legend was a verified user with nearly 50,000 followers. "I’m pretty sure this *sick* person is saying we are darksided pizzagate pedophiles who traffic our daughter," she wrote. "Ummmmm this is really scary shit."

The woman, "investigative journalist" Liz Crokin, responded to Teigen, writing, "What's not OK is trafficking kids as sex slaves which is rampant in Hollywood. Why don't you use your platform to educate people?"

That's when Teigen and Legend both threatened to sue Crokin if she didn't apologize. Crokin still stands by what she shared.

In order to help Teigen and Legend better understand how the hell they ended up involved in the Pizzagate conspiracy, author Alexandra Erin broke it all down. She explained that "the people invested in 'Pizzagate' are playing an alternate reality game in which they have invested everything. I mean, not anything so cheap or tawdry or tenuous as money. I mean everything. Themselves. Their hearts. Their souls."

Erin said that when a Pizzagate-believer is confronted with information that challenges their outlandish views, they simply change their rationale and explain reality away with more crazy stories. Teigen got involved with Pizzagate when she tweeted about her re-routed flight to Tokyo. "When she chronicled her favorite reactions, one was an off-the-wall conspiracy theorist posting things about a "Q-An*n" and "f*ll*w the wh*te r*bb*t," Erin wrote.

Pizzagaters believe that Donald Trump is secretly arresting people involved in a high-profile pedophile ring. Only those people wear hidden ankle bracelets and continue to live their normal lives. Crokin was attempting to prove that Teigen and Legend are somehow part of this group. It's truly nuts and the thread is worth a read, but be prepared to be even more disturbed by humanity than you already are.

After reading the lengthy thread, Teigen was just as freaked out as she was before, maybe more so. "It is INCREDIBLY weird to be two (semi) normal, ridiculously boring human beings who literally make food, watch tv and clean up dog barf in any kind of off time and then be suddenly accused of being in Hollywood’s hottest pedo ring," she wrote. "What a year what a year, 2017."

What a year, indeed.