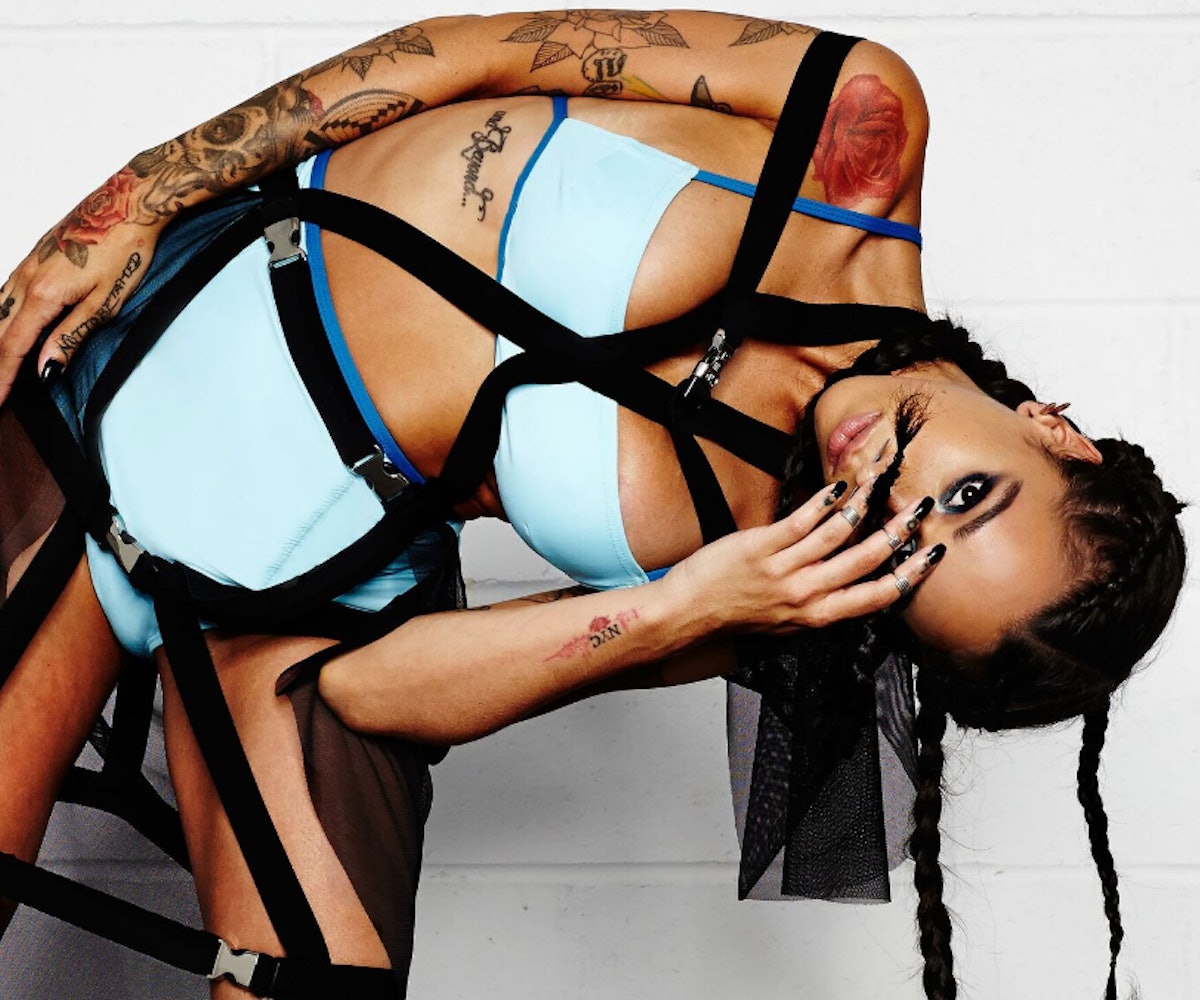 To know Chromat's sleek, sexy, architecturally influenced designs is to love them, yes, but it's also to envision yourself wearing them while storming the post-apocalyptic, water-drenched earth, slaying anyone and everyone who gets in your path. What can I say? When I let my mind roam, it goes straight toward fall-of-the-patriarchy utopian vistas in which women move freely and adorn themselves in whatever they want; and in which I am undoubtedly wearing this pentagram harness.

To aid me in my idyllic watery visions, comes Chromat's Spring/Summer Hyperwave collection, which can be seen via a new video made in collaboration between Chromat designer Becca McCharen-Tran, interdisciplinary artists Pussykrew (Tikul and mi$ gogo), dancer Mela Murder, choreographer Kaner Flex, and Body Labs, a 3-D scanning team which transposed Mela's moving body into what Pussykrew calls "a liquid universe that manifests internal and external transformations and female power."

The result is a hypnotic piece, which beautifully demonstrates the fluidity of power and the ability women have to disrupt and dismantle existing, seemingly static structures through their own inherent strength. Pussykrew explains:

We’ve fused fluid water forces and soft body with robotic machinery to bring to existence new human form. Mela Murder brought mesmerizing performance that has been translated through her avatar. We used a 3-D scan of Mela and a small motion-capture system to record the movement data of Mela, and then built the surreal dripping environment around her.

The effect is indeed surreal, and yet the power contained within the piece is practically tangible; watching it serves as a reminder that everything is transitory and it's up to us to create a better future. Or, as McCharen-Tran tells me, to her, utopia "is the elimination of hierarchies. The video presents utopia as a merging of human and machine; the creation of bionic bodies." And that creation of new beings is so perfectly embodied by Mela, who, at the time of filming, was pregnant. McCharen-Tran says, "Experiencing Mela's journey through her pregnancy was incredible. She emanated such light and such creativity throughout the whole process. She is the definition of strong, powerful woman, and the way the body can replicate itself from liquid states inspired the film."

Experience it all for yourself, in the video above, and look at more images of Mela wearing Chromat in the slideshow, below.