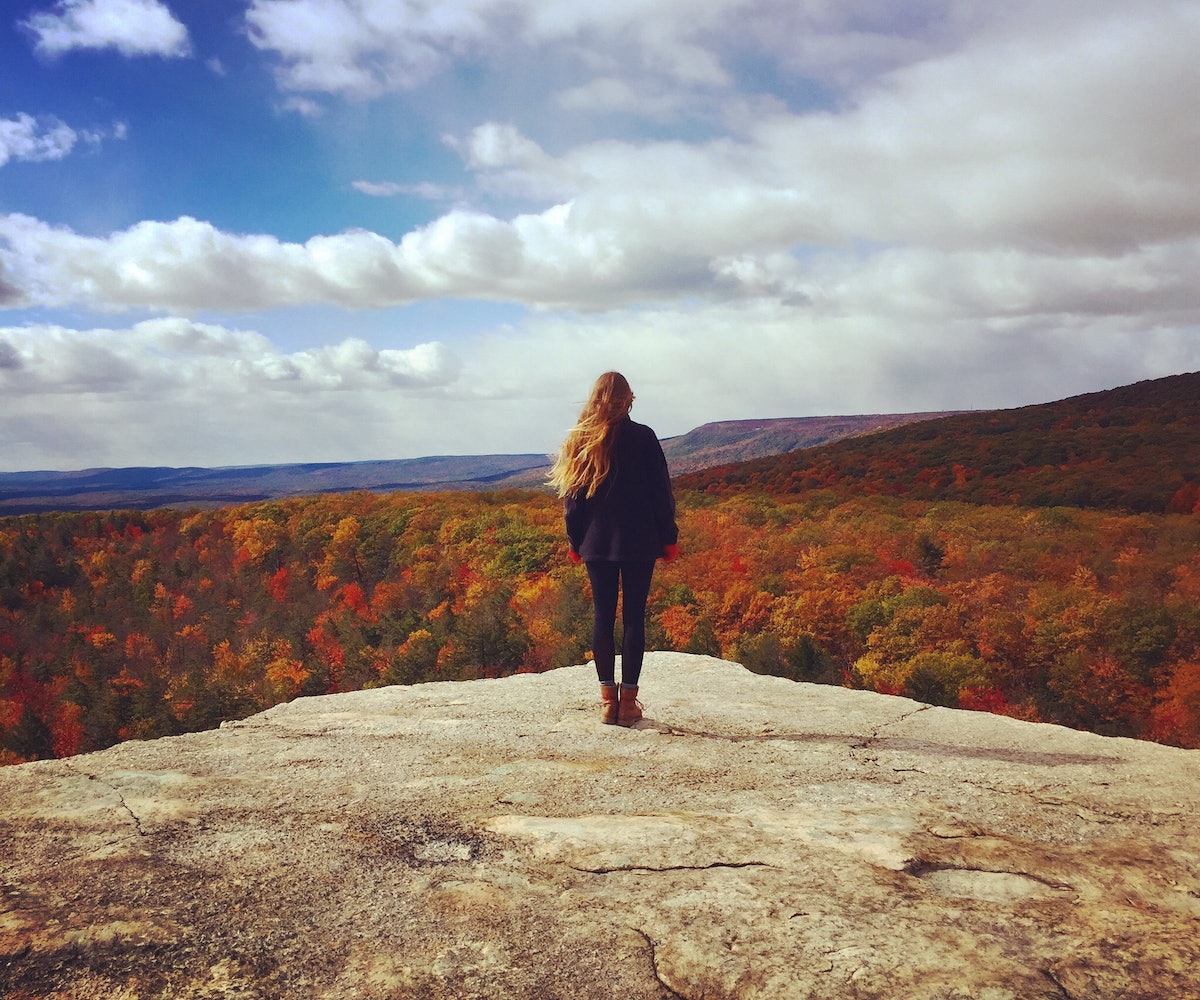 I’m not sure which came first, my dark wardrobe or my perpetually melancholy mood. Upon spring cleaning, which for me merely meant opening my closet and staring at its overwhelmingly messy contents vacantly, I realized something: nearly all of my clothes range from gray to black. My shoes, while mostly scuffed and muddy, are black. My coats are black. Hell, even my pajamas, which include a crazed concoction of stolen boyfriend shirts, are all gray and black. I felt like I was onto something and so I turned to the Internet to see if there’s a psychological correlation between mood and color. As it turns out, according to the theory and practice of chromotherapy, it’s a very real thing.

So naturally, as any manic, self-obsessed writer does, I broke up with my therapist and combed through the almanac of esteemed alternative healers until I found Sophia Hansen, M.A., a certified chromotherapist and Harvard University graduate. Upon contacting her, I was beyond delighted to fathom the possibility of enhancing my mood with color or removing my gothic moodiness with the dismissal of a black wardrobe. But first things first, I wanted to fully understand what chromotherapy was and become convinced that it was not a concept contrived by a unicorn-chasing cult or after-school witch club.

"Chromotherapy is a form of energy healing that uses colors from the spectrum of light. Every color of the spectrum holds a specific wave frequency pattern of electromagnetic energy that human beings interpret through the retina of their eyes," explains Hansen. "The color that you perceive is part of the visible spectrum of light frequency that's naturally reflected by a certain object. Colors can significantly affect moods, feelings, and emotions whether somebody is consciously aware of it or not."

According to Hansen, color therapy has been around for thousands of years. It turns out, in the ancient times of Atlantis, there were many great healing temples with large rooms and domes made of colored crystals, allowing color to filter through the rooms when the sun was out. These temples healed physical, mental, and emotional illnesses, and people were treated with different colors depending on their condition, each color possessing its own unique healing property. There are records of cures with color therapy in ancient Egypt going all the way back to 1550 B.C., with similar healing temples being used to cure the malaises of the time.

"In ancient Greece, Pythagoras, Plato, and Aristotle developed some of the early theories about light and color. Ancient Greece also had healing temples that used color therapy with colored light and gemstones. Interestingly, the ancient Chinese, up until modern times, diagnosed illness by the color of the pulse. For example, a red pulse indicates a numbness in the heart, a yellow pulse indicates a healthy stomach," Hansen says. "And finally, in India and Ayurvedic medicine, ills were and are treated with gemstones. The philosophy is that gemstones contain the pureness of the color and vibrations of the colors of the universe."

Okay, so color therapy is not some new-age hippy theory—it’s an ancient, international, multicultural practice. I asked Hansen whether it is possible that my all-black wardrobe and colorless surroundings were negatively influencing my mood and overall vibes. And if so, should I go out and exchange all of my warlock threads for rainbow-bright ones instead? "If someone is accustomed to wearing black, they might feel a bit off-balance or even emotionally uncomfortable if they only wore bright, vibrant colors and no black right away," says Hansen. "A gentle way to incorporate color into a wardrobe, especially for someone who's been comfortable wearing black for a while, would be to add one color at a time. You'll want to make your transition to incorporate the higher frequencies of color into your wardrobe as comfortable as possible—and take notice of how others respond to you when you begin wearing colors!"

With Hansen’s guidance, I decided to give the color wheel a spin. Slowly and thoughtfully, I switched out various pieces of my dark wardrobe for colors, with purpose. What I found will surely make you a believer, but before you actually ditch your gothic vibes, know this:

According to color therapy, the color black is either the absence of color or the mixture of every color. It reflects the notion of No-Thing-Ness which leaves it open to interpretation. On one hand, that's great because it represents potential and protection. However, it also signifies the rejection or renunciation of color itself. It's the ultimate color of surrender and relinquishment. So if you're going to wear black, wear it with intention, know why you're wearing it, and be conscious about it.

Read on to find out how my experiment went.

I love my black Nikes. I wear them even when I’m not going to the gym—they’re the most low-key shoes I own. But they’re also pretty blah. When I switched them out for these Free Transform Flyknit bright blue beauties, I was stoked to go to the gym. I didn’t think too much of it because I wanted to be sure it wasn’t the rush of having something new and clean that I was excited to show off. But as I worked out, I couldn't stop looking at my feet. I nearly face-planted twice on the treadmill because it was so pleasing to look at the color. For over a week now, I’ve been feeling more energized at the gym. This bright blue makes me confident and makes me want to dance. According to Hansen, I felt this way because blue is an expressive and transformational color. It made me want to change my routine and attitude.

I’m a terrible sleeper, so it was important for me to switch up my night routine. I have lots of rituals that I mix and match to trick my insomnia into resistance. I considered switching out my white bedding for a color, but that felt too aggressive and I worried that it would keep me awake. I opted for a light-colored Spasilk pillow and multi-colored PJs from ModCloth. I can’t say that I slept better, but I can say that I felt calm and safe and fell asleep faster. Something about putting myself in colors made me feel alive and vibrant, and perhaps that mentality tricked me into thinking I was the kind of person who would fall asleep and therefore I did. According to Hansen, I felt this way because these colors are powerful and passionate. They made me feel confident in my ability to tackle a night’s sleep. They didn’t make me feel weak and sick, something that I tend to experience at night, knowing that insomnia is out there waiting for me.

One of the main reasons I don’t wear color is probably subconsciously because I don’t want attention. I want to just fade into a shadow and go unnoticed. Wearing this bold ModCloth trench coat was strangely embarrassing for the first few days. I felt like a walking rainbow. People kept saying hello to me on the street, the coat seemingly making me more approachable. After a few days, I became less intimidated by its energy and caught myself checking my reflection out in store windows. Which came first, the coat or the friendly attitude? Whatever it was, this jacket gave me seriously girlish energy and social confidence I didn’t know I could muster. According to Hansen, the mix of colors made me feel both balanced and energized, giving me confidence. The light blues gave me a centered ease.

I had to argue with my roommates over these chaos-in-the-desert-vibe pillows. We’re all pretty mellow yellows and are big into subdued neutrals. These pillows stuck out like a sore thumb, an eyesore really. While I think they were patiently waiting for this experiment to be over, I was slowly but surely becoming more accustomed to color and gravitated toward the pillows every time I sat down. I wanted them to be at least in my peripheral vision. They made me feel awake, which is an interesting concept when you’re sitting on the couch to relax. According to Hansen, I felt this way because the mix of orange, yellow, red, and pink made me feel energized, joyful, and creative. I can’t say I’d want to look at them all day, but when I’m being creative, it’s helpful to be around these colors.

I rarely use a purse, and if I do, it’s black and not noticeable. My friend had this pink Aimee Kestenberg bag, which prior to the experiment looked like a piece of Pez candy to me. I ended up liking the way it made me feel so much that I went out and bought my own. It encourages creativity and energizes me to write down my thoughts. It makes me feel safe looking at it, it’s not abrasive, it’s totally bewitching how much it affects my vibes. I never thought I’d be a girl who wore a purse or pink. According to Hansen, I feel this way because light pink is both passionate and inspirational. I bring it with me everywhere now—I’m even considering painting my bedroom walls this color.

I installed these colored ilumi lights—which at first made my apartment look either like a weed hatchery or da klerb and gave me a lot of anxiety until I talked to Sophia about the right colors for relaxation. Magenta, blue, and purple turned out to be really calming. My roommates and I now love to sit in the room with the lights on—I think everyone’s addicted to the energy. According to Hansen, we feel this way because those colors are spiritual and inspirational, as well as welcoming and calming.

My luggage has always been black—I’ve never put much thought into it. However when it was suggested that my travel nerves might be calmed by a brightly colored carry-on, I had to give it a try. I swapped out my unremarkable suitcase for this festive Oilily Trolley. I can’t say that the mere presence of these colors on a travel day turned me from a nervous wreck to a namaste goddess, but I will say that my mood felt lighter as I waited at the gate with these colors in sight. It made the act of traveling feel a little bit more playful and less serious—a much-needed mentality.

NEXT UP
Beauty
11 Aquarius-Inspired Nail Art Ideas For the Unpredictable Season
Entertainment
Ebony Riley's "Deuce Deuce" & 9 Other New Songs Out This Week
Entertainment
Beyoncé Is Now The Most Awarded Artist In Grammy History
Entertainment
Harry Styles' "As It Was" Grammy Performance Featured A Silver Tinsel Onesie
Style + Culture, delivered straight to your inbox.