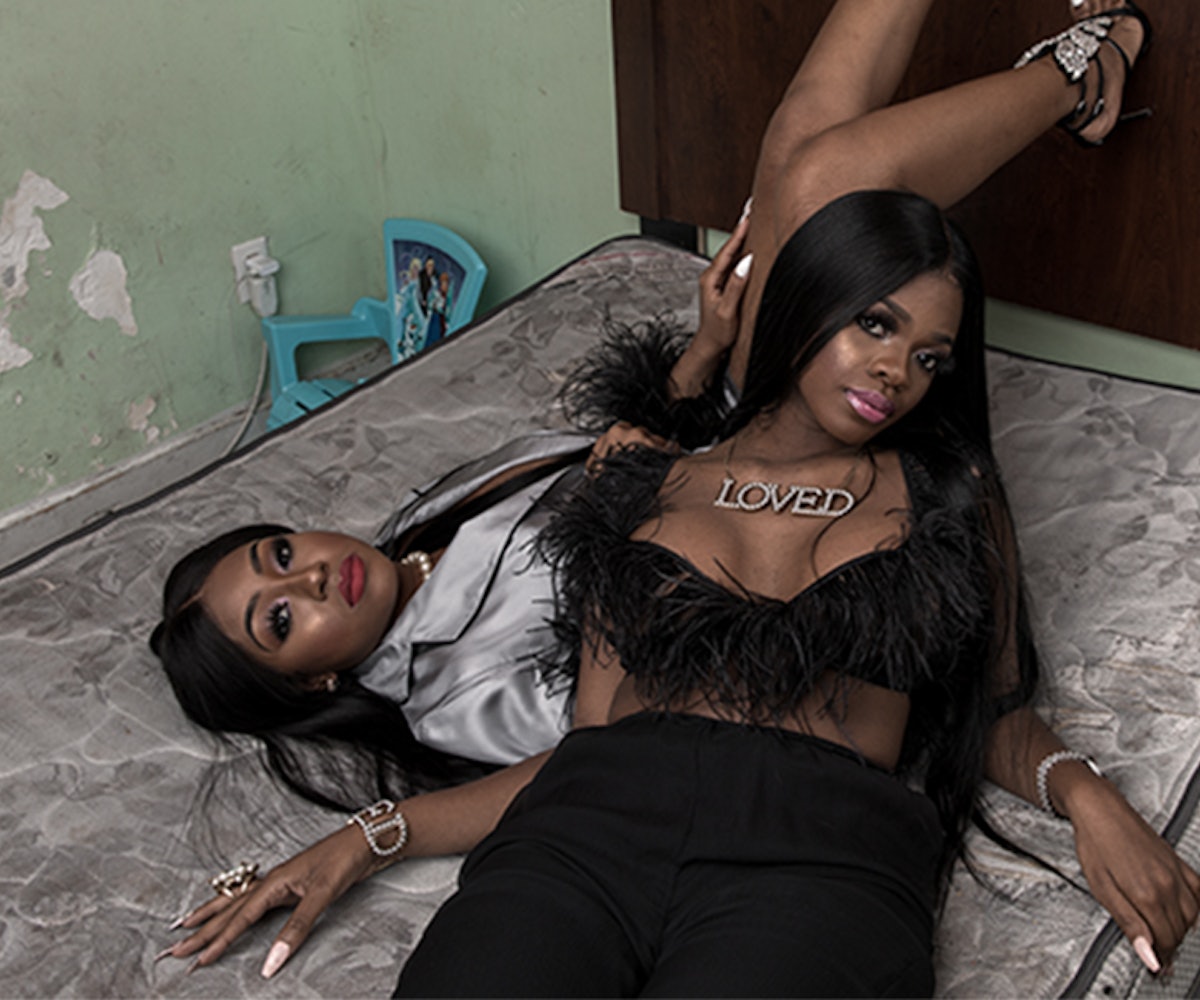 Though artists like Rick Ross and the recent crop of SoundCloud superstars have shifted the paradigm, there's still a platonic ideal of Miami rap as the bass-heavy, raunchy, and eminently danceable soundtrack to debaucherous nights. Okay, so maybe “platonic" isn't quite the right word. Comprised of longtime friends Yung Miami and JT, City Girls are offering an intoxicating iteration of that sound which plays on classic tropes while broaching ideas of empowerment that are a welcome step forward.

“Sometimes it's people's music I can't listen to. What they're saying is probably good, but the flow of it is just so serious. Sometimes you've got to loosen up, got to speak for other people. I could rap bars, but I'd rather just speak to women about how they're really feeling," says JT. “Don't be scared to express what's happening in everyday life. Sometimes people are trying to say those things, so I think that City Girls basically speaks up for them, because there's a lot of shy women who are scared to speak what's really going on in their life because everything's not great with their life, they have stuff going on."

JT and Yung Miami became friends as teenagers growing up in South Florida, and their tremendous chemistry makes up for the relatively short time they've been actually making music together. Neither had any recording experience prior to starting City Girls, but their tag team energy is so infectious that a decision to record music together on a lark led them to suddenly being hot names in the Southern rap world.

“Growing up we were into all the Miami music, and me, personally, I always knew how to rap, but I never was pursuing a rap career, like, ever," says JT. “So last year in August we just wanted to do something to have some fun, and it took off."

While most artists toil before publicly releasing their music, City Girls hit the ground running. The first track they recorded, “Fuck Dat N***a," found a receptive audience online, as well as the ears of Coach K and Pee, the men behind perhaps the hottest rap label of the moment. Their company, Quality Control, helped spread and popularize the Atlanta trap movement from which a mighty family tree of subscenes and derivative, yet energetic MCs has emerged. The label's present roster includes Migos, whose deep bag of hits is unavoidable if you're out in any metropolitan area, as well as former King of Teens Lil Yachty and Drake-approved rhymer Lil Baby, whose project Harder Than Ever debuted at No.3 on the Billboard 200.

“We were just playing around, we didn't think that we were going to get signed. We didn't do a song to get signed, we basically just were messing around, went in the studio and made that song, then we put it on the internet," says Yung Miami. “Then QC saw it, and we ended up getting signed, but that wasn't our intention."

“Fuck Dat N***ga" introduced mainstream audiences to the raw, unfiltered rhymes of JT and Yung Miami as part of last year's Quality Control: Control the Streets Volume 1, as well as the signature catchphrase that became the title of their debut LP. “He want my 10, I need his new digits off his plastic," Yung Miami raps, with JT in the background, punctuating the sentiment with an uncompromising, “Period!"

“'Period' is just our lingo, that's something we say to each other," Miami explains. “She'll say something, and I'll be like, 'Period.' Like, I'll be agreeing with her or I'll be disagreeing with her, and it just became like a movement for us."

That bluntness is an asset for the two MCs, who are so adept at dressing down their detractors that you'll be terrified of getting on their bad side after hearing cuts like the drumline-inspired “Period (We Live)" or the infectious throwback “I'll Take Your Man."

On the latter, City Girls also show a reverence for rap's female pioneers. The duo connects with producer and fellow Miamian Bigg D for an update to Salt-N-Pepa's classic of the same name, offering a take that blends the original's New York grit with Miami spunk and a dash of New Orleans bounce. The lyrics are even more confrontational (“If you wanna fight, I'm with that too/ Bitch I'm from the hood, lace up your shoes," JT taunts on the opening verse), but Yung Miami says they were committed to keeping the spirit of the original track alive.

“I just wanted to keep it kind of old-school, so I did my research, listened to it," she says. “I listened to a lot of old school music, and I just basically wrote my verse off that."

In her verse, Yung Miami addresses a frustrating and problematic assumption that has plagued many female MCs dating back to Salt-N-Pepa's heyday, the idea that they needed the support of male gatekeepers to make it into the industry, and that how they got to their current position may have been based on something other than their lyrical talent. “The n****s with the sweating and the hoes with the whispering / 'That's Yung Miami and she signed to QC'/ How the fuck she got a deal, and she been rapping 'bout a week?/ She probably suck Pee dick, or let Coast fuck, nah hoe, I'm a G, bitch," she snarls in response.

“It's this sideways stuff, people saying I probably did this and I probably did that, but that just comes with being a female artist being signed to males," she says. “They just say, “Why them? They probably had to fuck to get on." So I'm going to address it in a song because I'm tired of it... When a man gets a deal, it's no excuse on why he got his deal, it's just like, 'He's got talent.' But, when a woman gets something, it ain't because they actually like what they're doing, [people say] it's because they fucked for it. That shit just is crazy, you know?"

But once they've dispatched with the naysayers, City Girls are back to their mission of making what JT smartly dubbed “alter ego music" in an interview with the Miami New Times. “If you work a 9-to-5 everyday, when you get out off your job, put on a City Girls song and you just a bad bitch then," she tells writer Kat Bein. “That's the vibe we going for. You confident then."

And the duo's profile has skyrocketed in recent weeks with their appearance on "In My Feelings" off Drake's Scorpion where they spit classic City Girls quotables ("Fuck that Netflix and chill / What's your net worth?") on the biggest stage possible. Unfortunately, JT is turning herself in to serve a prison sentence stemming from fraud charges and currently has a release date in March 2020.

As they detail on “Rap Shit," both Yung Miami and JT come from turbulent backgrounds, with the former growing up in the violent Opa-locka area, while the latter served jail time and clashed frequently with her family. That they've risen so quickly and become part of one of rap's biggest labels is a testament to their talent, their teamwork, and their determination. Period.