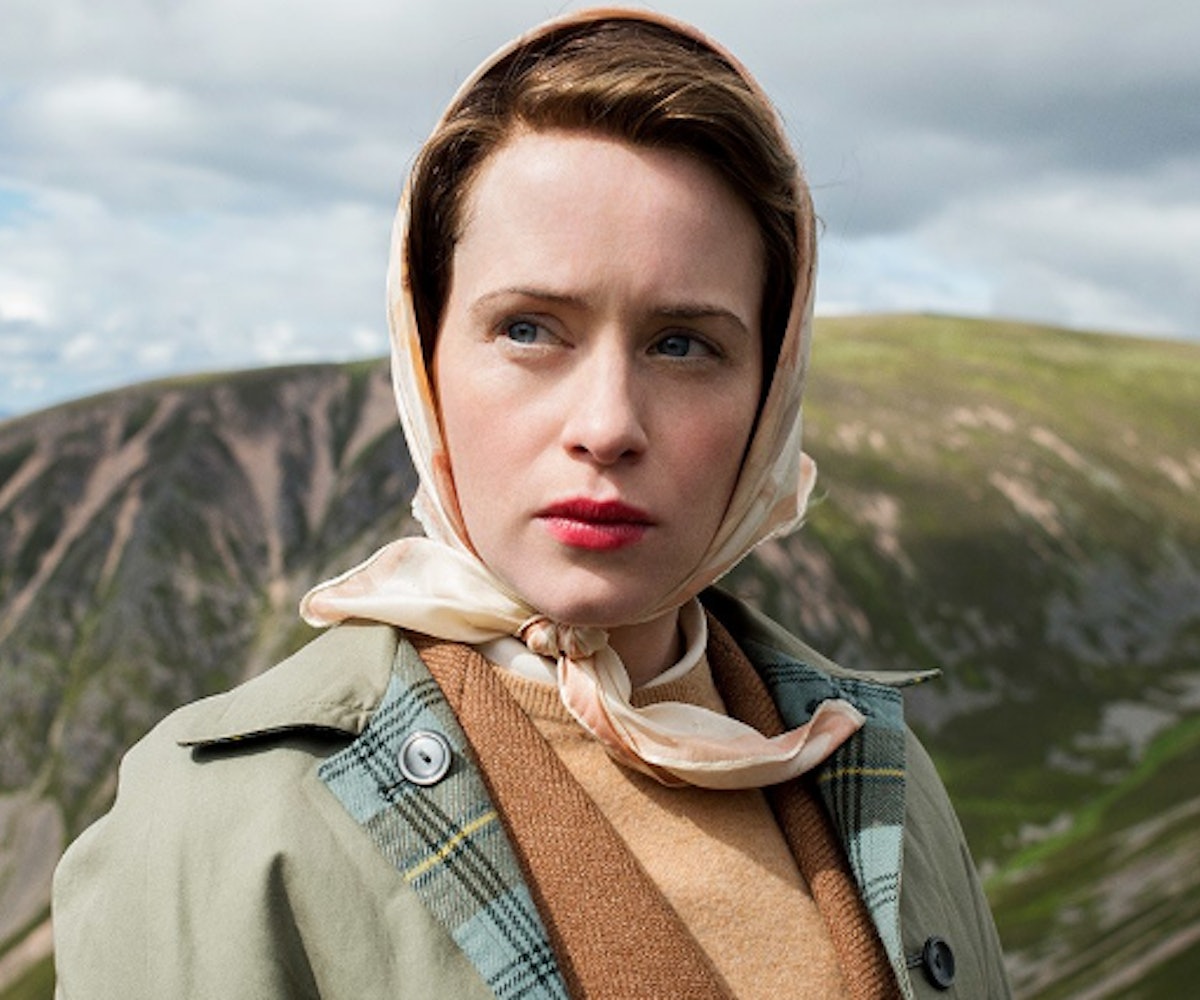 One year ago, Claire Foy was a highly regarded British actress who had built a decade-long career by appearing in prestigious BBC miniseries like Little Dorrit, Upstairs Downstairs, and Wolf Hall. But then last November, Netflix dropped season one of The Crown, and Foy became a star seemingly overnight. Her steely yet delicate portrayal of a young Queen Elizabeth as she ascends to the throne was universally acclaimed, and culminated in a surprise victory at the Golden Globes. Now, Foy finds herself on the cover of magazines and at the top of casting directors’ wish lists, as evidenced by her recent casting as the new, and new-look, Lisbeth Salander in an upcoming adaptation, and as the female lead opposite Ryan Gosling in Damien Chazelle’s Neil Armstrong biopic First Man.

Before The Crown returns for its second season this December, which will also be Foy’s last in the role, Foy can be seen in the romantic drama Breathe, which tells the true story of Robin and Diana Cavendish, a couple who is tested when Robin (Andrew Garfield) is diagnosed with polio at the age of 28. Foy was in New York earlier this week promoting the film, and we sat down to talk to her about the emotional journey she went on with this film, how The Crown changed her life, and the surreal experience of winning a Golden Globe.

After you shot the first season of The Crown, were you looking to film something during hiatus, and was it this film?

No, I definitely wasn't looking for anything. It was sort of a hiatus. I finished The Crown and then I had six months off and then we started again. So, the idea of squeezing in a job was my idea of hell. But then I read this script.

So you were still reading scripts?

Well, no. It wasn't like I was getting scripts because there was such limited amount of time between starting the second series of The Crown. But I had worked with [Breathe director] Andy Serkis before, and we happened to bump into each other in a park in London, then I got sent the script. I was like, "I love Andy, so I'll read it." And then I read it and cried from beginning to end and was like, "Oh god, I should never have read it." And that was it.

Do you ever cry while watching your own films?

This film, yeah. If it was just a conventional story and it was entirely fiction, then I think I'd just watch it and go, "Eh." But because I know the family and I know the situation and I know these people are real people, it's impossible for me to watch it without just thinking of them, so I'm not crying at me, I'm just like, “God, I love them so much"

We’ve seen the role of a wife or girlfriend standing by their man at a time of great need many times, whether it’s Felicity Jones in Theory of Everything or more recently Tatiana Maslany in Stronger. Did you try and bring something new to that familiar archetype?

No, because I think that if you try and put people into a bracket like that, it takes away any uniqueness or individuality at all. I don't think it's a type of woman or a breed of woman, I think there's just a tendency to think that women are strong or weak. I think that strength isn't just about being mentally strong or physically strong, it's about how much you can carry or how much you can bear and how much adversity you can face. And women are very, very good at that.

I’d like to see a story told the other way around.

That'd be interesting! When does that ever happen? [Laughs] Does that happen as well? That's why men and women are different. I have a child and I think that when you have a child you see very clearly the differences between the roles that mothers and fathers play in the life of the child. You can just see what they give and what their role is, you can just see it.

Season two of The Crown is your last. Was it difficult to say goodbye to that character?

I don't think I've said goodbye to it yet. We've got so much publicity to do and so much to get done before then.

Your rise to stardom seemed to have come out of nowhere for a lot people, but what they don’t realize is that you’ve been working for 10 years in Britain. Does it feel fast for you?

I think it has been very fast, in the sense that after The Crown came out, blah blah blah. But if it had happened when I was 23, then it would have been like—I had no backup. I think you've got to have faith in yourself when you're put in this scenario, where you're meeting people that you've always admired or you're working with people that you think are extraordinary. I think you've got to have some sort of understanding that, Okay, you may not think you actually belong here or you deserve to be here, but you've worked really hard. You may not change the world with your performance, but you'll do a good job. I think unless you've worked for that amount of time, you don't have that faith in yourself.

Do you find it strange that suddenly everyone wants to work with you, even though you’ve been doing this for a while?

Well, I think it's just that when one person says you're worth it, then everyone is like, "Oh my god." And I think this industry is so much about making money as well, and you can't underestimate that. I don't ever let that enter my brain. And I’m not thinking like, This is going to last, this is where I’m at and this is where I’m going to stay. As soon as you become not bankable, you hopefully are able to keep working. I want to act for as long as I want to act for, but I don't need it to exist, which is good.

You seem to be at a point in your career where auditioning is going to become a thing of the past. Is that something you’re looking forward to? Not having to audition?

I would always petition to audition. It makes me feel more comfortable. When I was growing up,  you'd look at people miscast in roles, so I think that you should get the right person for the part, not the biggest name. Because also, I would never want to feel like I only got a part because of that reason, that makes my skin crawl. I think it's really important to investigate it and wear it and see if it fits you, because nothing is worse than being on set and being like, "This isn't right, this is wrong."

What has been the biggest "holy crap" moment for you since The Crown premiered?

Winning the Golden Globe. That was “holy crap.” We had no idea, really. We knew it got good reviews and people were watching it. We knew people in the industry were watching it because we got some lovely emails from colleagues and peers and stuff.  But I had no concept of the fact that anyone watched it in America or anything, because it's thousands of miles away. Then I went to L.A. and was doing press, and then went to the Golden Globes, and I was pretty much unrecognizable at the time, I had blond hair. But then when I won, it was a very surreal and slightly disconcerting moment.

Why was it disconcerting?

Because I don't know how you can prepare for anything like that. And I suddenly just wanted to go into a dark room and sit by myself and not have to talk to anyone. I was like, How should I feel about this?

Did you watch your speech afterwards?

No, all I remember about it is going, "Why can't I regulate the sound of my voice?" And it reminded me awfully of speaking at a wedding or a funeral or something where your hands are shaking and you're like, "I'm not even nervous. guys, I'm really in control." The thing that I really remember is, I accepted it, walked off the stage. and just kept saying, "Oh my god, oh my god, OHMYGOD" really loudly. And then we won drama series and I was like, What the fuck is going on?

And what can we expect from season two?

I think Elizabeth becomes incredibly set in her role and knows what she's doing. It's not like that's not interesting, but at that point you start to see she's at this point, so what does it do to the other people around her?

Winston's gone and it breaks my heart.

Is The Crown essentially a love story between Elizabeth and Philip?

Did it change how you saw the monarchy?

Definitely, because I hadn't ever considered them to be human beings, as most people don't. I think that's why the show made people think about them differently, because they've been forced to go, well, if you take all the privilege away, and the importance and the power, who are they? And then you are forced to look at them as people and understand them and go, gosh, I feel sympathy for you, I feel fear for you. Which I think is why the show has gone so well. Well I don't know, I might be completely wrong.