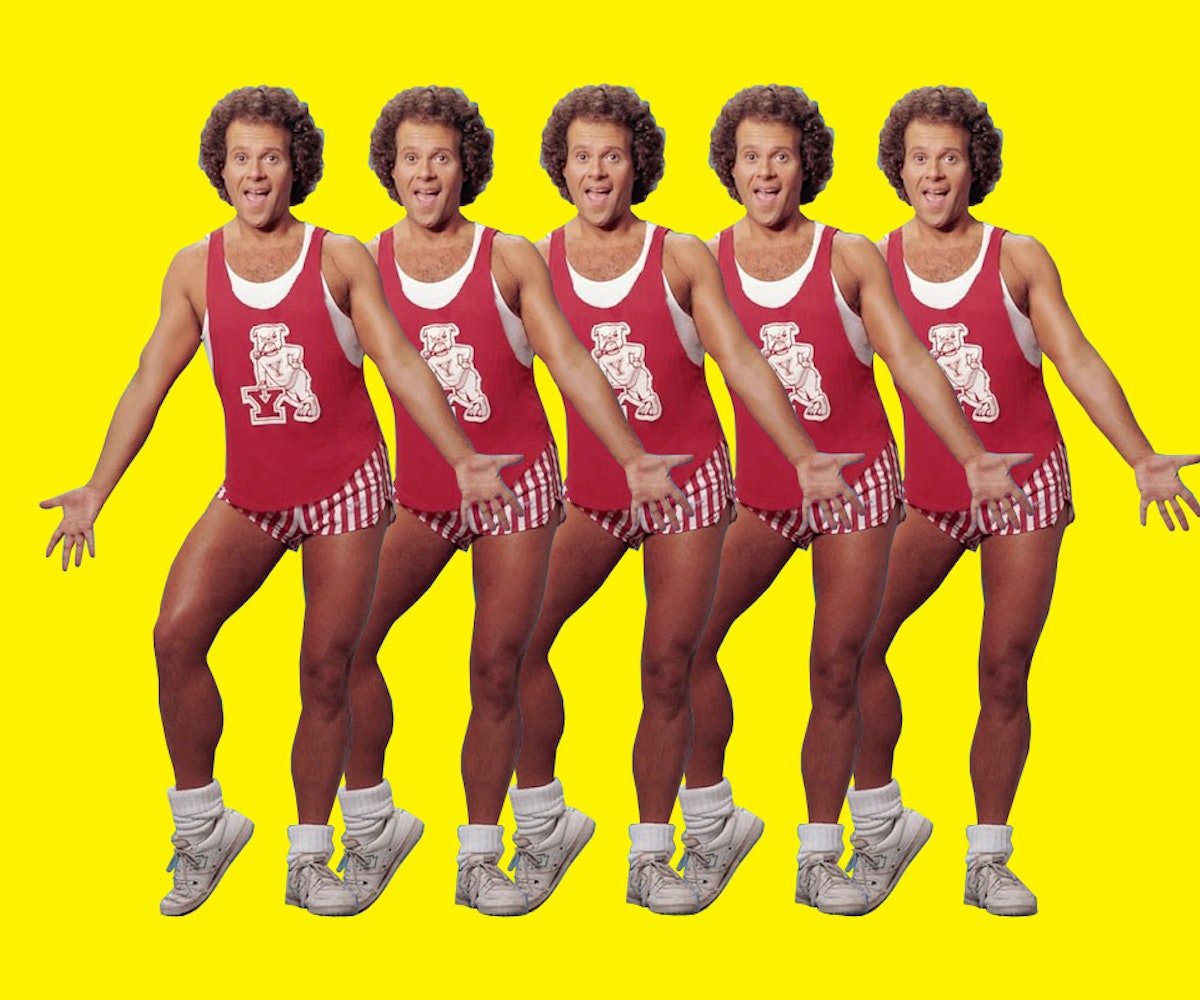 I remember being in fourth grade, watching my mom sweating to the oldies, working on getting "buns of steel." Sometimes, I joined in—not for the buns, but because it was fun and weird and we had a good laugh. By the time I hit eighth grade, my best friend and I discovered Tony Little’s workout VHSs at a garage sale, and paired with Paula Abdul’s fabulous Get Up and Dance video that I’d already stolen from my mom, we alternatively danced, crunched, and giggled along. Truly, those were the golden days of fitness.

Looking back at the videos—almost all of them still available, grainy as ever, courtesy of YouTube—I’m hit with a wave of nostalgia. And, to be honest, if you’ve ever squeezed through a Pilates class or felt the burn in Zumba, you’re really not that far away from some high-cut leotard and sequins headband action. Find a friend or two and make it a girl's night this week; only make it about getting fit, instead of getting lit. You’ll laugh just as much—and feel way better the next morning.

The Buns of Steel video that came out two years after Abs of Steel might have stolen this classic's thunder in 1994, but 2017 is all about the core. This 25-year-old video still hits your abs right where they hurt, and while the high-cut leotards might be funny, you won’t be laughing for long. You’ll be too busy crunching along with Tamilee Webb, whose abs and high-tops would make her a #Fitspo social media star today. (And seriously, the moves are still great—do the video once for the hilarity, but keep some of the movements, like the crossed-leg glute bridge, in your normal routine.) You absolutely have to pair this with Buns of Steel, Webb’s other short workout series, because, come on, who doesn’t want buns of steel?

While it’s not as Zen-feeling as a Pilates class, Terri Walsh will get your core working. The video features “handpicked instructors from across the land” (seriously, it says that in the opening slide), and Walsh’s energy is giggle-inducing but really does get you kind of psyched. Her “crew” is an earlier version of Taylor Swift’s Squad, and this one is a little more high energy than Abs of Steel, so you get a bit more cardio with your ab work. Also great for athleisure inspo, thanks to crop top-style sports bras and hot pants in coordinating jewel tones.

If you secretly dig Zumba classes…

Paul Abdul Get Up and Dance

This kicky dance routine will remind you why Paula Abdul is so hilariously rad, with her sequined vest and an amazing array of backup dancers. Included in the routine: a whole lot of pelvic thrusting (keep an eye on the guy awkwardly standing in the front row wearing a loose unbuttoned top for a good time). You’ll also get some shoulder rolling that will make you the hit of the next dance party, and you’ll get sweaty in the process. Again, watching this will only serve to remind you that the early '90s are seriously back; the hair might have changed, but the athletic fashion of 1994 has made a comeback. (Buy the full workout DVD here)

Pump It Up The Ultimate Dance Workout

Remember when we wore ankle warmers over sneakers, with our hot pants? (No? Well, it happened.) The younger millennials might remember Pump It Up from infomercials in their early aughts. The workout-to-music routine premiered in 2004, but only a decade later, it’s as kitschy as the ones from the late '80s. Possibly even more so, because the music gets cheesier and Deanne Berry's and her band of Barbie lookalikes' (down to the outfits!) over-the-top energy is almost frightening in its perkiness. But you’ll definitely be soaked with sweat by the end.

Richard Simmons Sweating to the Oldies

If you’re hosting girl’s night and wine is involved, this video is a classic for once the vino has kicked in. Otherwise, it might be a little bit too much to handle in a crowd. But if you’re new to fitness and you need a slightly more low-impact dance-y workout to get you ready to handle something like Pump It Up, Simmons has your back. And unlike the other instructors who feature spray-tanned, ridiculously fit backup dancers, Simmons has a more relatable group of people shaking and strutting along to the beat in the background.

If you love bootcamp-style fitness classes...

Jane Fonda was one of the godmothers of the fitness video movement, so you can’t skip the joy of a Fonda workout (and I can almost guarantee you’ll be able to recruit your mother to join in the fun—and maybe show you a move or two). Remember doing step workouts in gym class when the gym teacher was feeling too tired to bother setting up a basketball game? You probably did this workout, or one remarkably similar. And while it might not look like much, those steps start to feel wicked hard after a few minutes. If you want to ramp up your workout, just find a higher step or stool to work with.

The fitness world owes a great debt to early adopters of fitness videos, like Kathy Smith, who came out with her fat-burning VHS workout back in 1988. Her bright purple leggings with a leotard and crop top will seem familiar: you’ve almost definitely seen this video in the back of your mom’s video shelf or at a yard sale in the 10-cent bin. The aerobic workout isn’t as challenging as CrossFit, but it’ll get you moving—add ankle and wrist weights (or hold small weights) for added resistance training. And it really will challenge your balance and coordination!

NEXT UP
Beauty
Meet Erika “Babygirl” De Leon, The B-Girl Who’s Empowering A New Generation of Female Breakers
Fashion
Balenciaga Will Reward You For Selling Your Vintage Bags Back
Entertainment
John Waters To Make His First Movie In Nearly 20 Years
Entertainment
Jared Leto To Star In Karl Lagerfeld Biopic