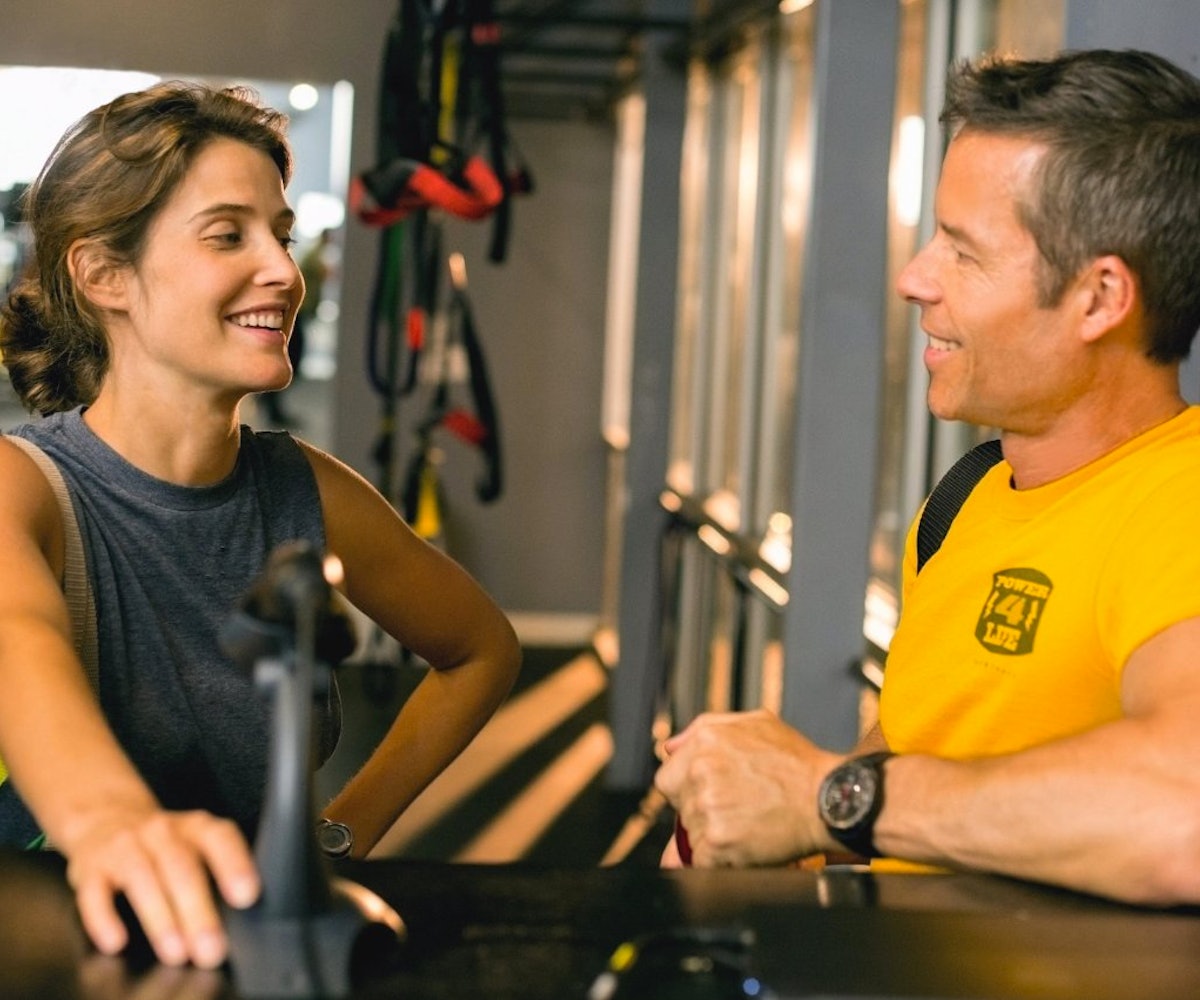 In the offbeat romantic comedy Results, Guy Pearce and Cobie Smulders play personal trainers with a checkered romantic past, whose meandering lives get upended when a pudgy new client (Kevin Corrigan) enlists their services. In his first film with boldfaced actors, director Andrew Bujalski (Computer Chess) tears away at traditional rom-com boundaries to create something loose and unpredictable. Much of the film's appeal—and there's much of it—comes from Smulders and Pearce, Marvel movie vets who slowly reveal warm, mushy centers that betray their characters' hard-bodied exteriors. When we caught up with them recently, they were in a playful mood, snacking on M&Ms and riffing like old pals. And since this is a movie centered around the fitness world, we had to ask them about their workout routines, and of course, what they thought about the "dad bod."

Given that you share the Marvel connection, was there an immediate bond between you two on set?

Colbie: There’s a club. There’s like a smoking lounge in the airports.

Guy: Yeah, a little club. We talk about how much money Marvel makes.

It’s ironic that the two of you had to play personal trainers in Austin, one of the best food cities in the world. Did you get to indulge in any of that city’s famous barbeque?

C: A lot of liquid things.

C: Nooo. The crew yes. Tito’s vodka, that was it. I was five months pregnant when I started this film and that was one of the gifts in my house.

G: It was all about health. Food, running, going to the gym.

C: But I think it was also a little bit of a character choice. I know for me, I was doing workouts I probably wouldn’t have done personally—a lot more weights. I like classes, like a spin class, just knocking it out and being done with it.

G: Did you not do the classes because you were pregnant?

How do you guys stay in shape normally?

C: I do classes. I’m a big, big soul cycler now, which I was so pooh-poohing for so long until my neighbor dragged me to it because it’s a block from my house.

G: Is it different than a spin class?

C: I think it’s different in the sense that it’s pitch black, the music is so loud. Normally I get really in my head and I’m like, I’m tired, I’m going too hard, I’m going to be sore tomorrow. There you’re sort of in your own world and they have really good music, so you get into this vibe. So I do that and then I do pilates, because you get really tight from that.

G: For me it’s different all the time. I suppose the general fallback kind of thing that I do is I got a couple of dogs, so I do a big hour walk first thing in the morning, and then I’ll do a half an hour at the end of the day with the dogs as well. And then if I’m not shooting a film, I go to the gym four days a week I suppose, and at the moment I just do light weights to maintain, so I don’t get any smaller.

What are the biggest sacrifices you have to make to keep in shape?

C: I have a really longstanding relationship with cheese.

G: Every girl does. Cheese and shoes.

C: I’m opening that shop. “Have some cheese fondue and then look at some Louboutins!”

And what about you, Guy?

I have moments every sort of two weeks where I’m just like “I really just want a glass of wine,”  and I really have to fight to not have it. And then the next day, it’s gone and I’m so glad I didn’t have it because I find that it’s so addictive.

Guy, did Andrew write your character as an Australian or was that something you changed after you came aboard?

He didn’t, because he wrote it and then said, I’ve written this thing for you and I’d love you to do it. And I don’t remember how many weeks went by, and he called me and said “I’m wondering how you feel about playing him as an Australian.” At first I was hesitant because I had started to get my head around who this guy was, and it was a big change for me. When we decided he would be an Australian, he had lived in America for probably 20 years anyway because he had a daughter there so he had certainly taken on some Americanisms. It was more about finding the guy that I know as the obsessed fitness guy, and what kind of Australian he was. He had a very particular Australian kind of attitude.

Results is a very unconventional romantic comedy, but its ending was felt somewhat conventional. What did you think of that?

G: I think that even in real life there are things that happen that might seem conventional. I suppose it’s the root through which they kind of get there that it remains that the film doesn’t necessarily fall under traditional conventional stuff. You don’t feel like it’s the perfect ending.

C: I also will say there was something really cool about Kat’s character completely disappearing for a chunk of that movie and this other love story starting between you and Kevin’s character. You don’t really see that a lot of the times when you’re dealing with romantic comedies. Normally it’s like hitting you over the fucking head like, Well, she went to a desk job and here she is at her desk job and she’s going on a date with another guy and it’s not quite right!

G: Particularly because so many films fall under that conventional sort of structure. And that’s all satisfying on a certain level but it’s a bit sad that that happens all the time. In the ‘70s they didn’t do that. It’s all because of that bloody Jaws.

Since this is a movie about working out, have you guys heard about the “dad bod” phenomenon?

It’s more about how a pudgy male body is now attractive and something to strive for.

C: Oh like somebody who’s going to stay at home and help you take care of your kid?

The original article mentioned that it’s supposed to make women feel less insecure about their bodies.

C: Right, so we don’t have to try because they’re not trying.

G: So it’s the anti-Calvin Klein of the last 20 years.

C: Isn’t there like a happy medium there? Can’t we all just be happy, healthy human beings? We have such a fucking easy society where like, I push a button and my laundry’s done. I don’t carry it down to the fucking river and back on the top of my head. So you need to work out your body and take good care of it. Couldn’t we just think about it from a healthy perspective instead of how we look superficially?

G: That would be great Cobie, if the world could be like that, but I’m sorry.

C: Print that in your fucking magazine!!

NEXT UP
Culture
An Exhaustive Breakdown Of The Balenciaga Controversy
Life
NYLON Daily Newsletter: December 2, 2022
Culture
NYLON Party Report Card: Partying With The Stars & 94 Foot Long Whale At The Natural History Museum Gala
Entertainment
Precious Pepala Is Going From TikTok Covers To Her Own Resonant Songs