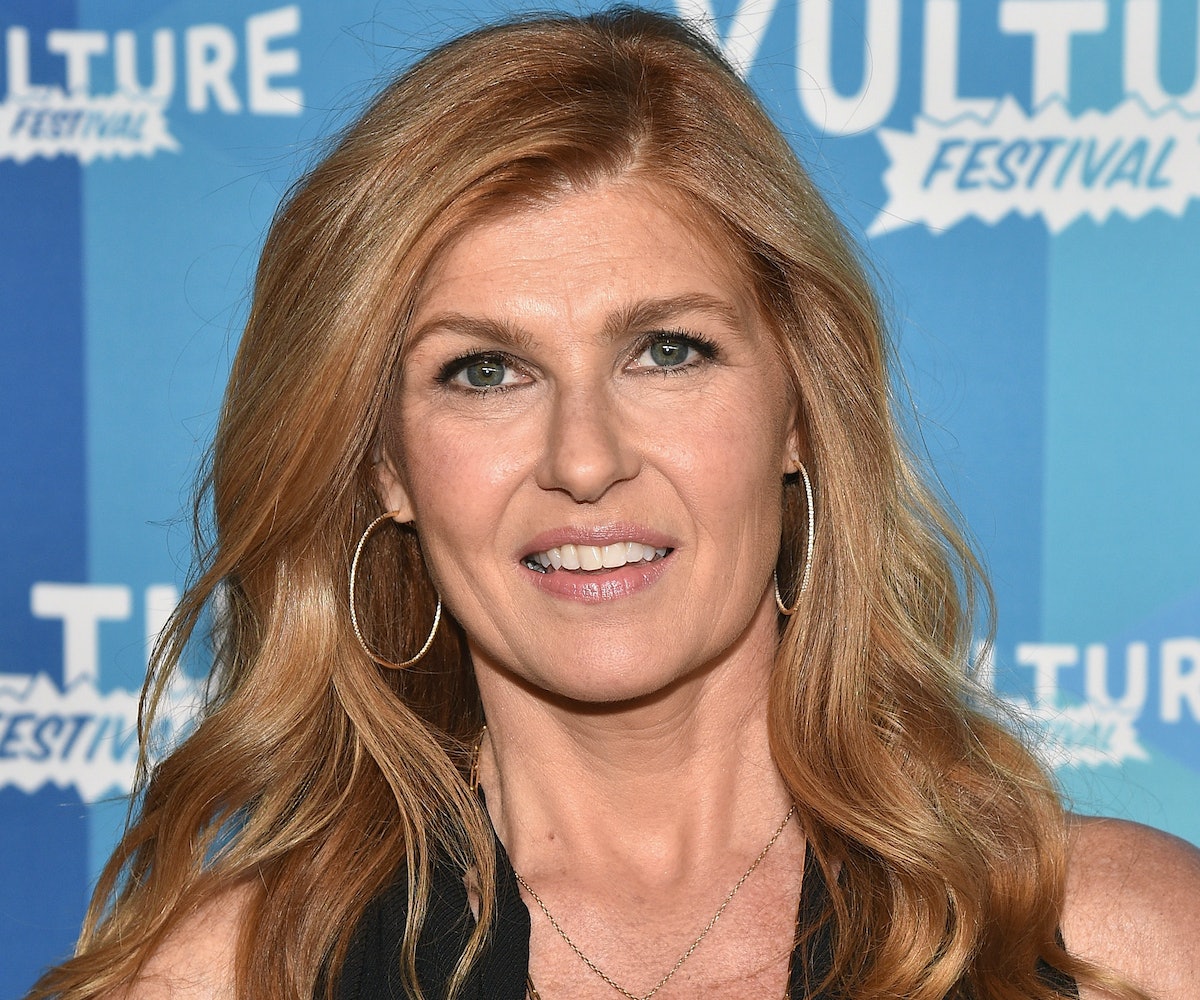 Everyone knows a Cathy, the put-together upper-cruster that Connie Britton studiously portrays in Miguel Arteta’s black comedy-cum-social satire Beatriz at Dinner. Cathy fancies herself a good person; she does charity work, she stays apprised of world news, and when her massage therapist Beatriz (Salma Hayek, made under with a dowdy haircut and an intense glare of contempt) has engine trouble, she kindly invites the woman to join the dinner party she’s throwing. The trouble is that Cathy is the kind of person who turns a blind eye to her husband and his business partner (John Lithgow) Doug’s questionably legal and ethical practices in exchange for a life of privilege. Since Beatriz decidedly isn't that kind of person, she can’t help but call the capitalist swine as she sees ‘em. And when this happens, Cathy’s true nature makes itself known, surprising even Cathy, herself.

Britton’s made a name for herself lending dignity and nuance to the often underwritten and underappreciated role of "the wife"; she’s still regarded as the toast of Texas tailgates for her stint as Friday Night Lights’ Tami Taylor, and she elevated country soap Nashville from a guilty pleasure to a weekly actors’ showcase. On the press circuit for Beatriz at Dinner in New York, Britton sat down with us to discuss her character's politics, the current state of women's rights, and the enduring legacy of Tami Taylor.

Your character in Beatriz at Dinner walks a fine moral line. What’s your read on her?

I really love the character, because I feel that there’s some of all of us in her. She really is well-intentioned. She’s trying very hard to be her version of the best possible person she can be, in all caps. And that’s genuine. I try not to comment on characters I’m playing, try not to judge them. Then this is made more complicated by the fact that Beatriz literally saved her daughter’s life, so, in a very real way, Cathy feels beholden to Beatriz. She wants to repay her for the great gift of her daughter’s life. What’s interesting to me is that she reflects many of our sincere desires to help and to be a good citizen, but then we get to see her limitations. She lives a very comfortable life, and she is limited by her own comfort. Being friends with Beatriz is her version of looking outside of herself. Her relationship with Beatriz is very little about Beatriz, and mostly about Cathy.

She never explicitly states her politics, but do you think of her as a liberal or conservative?

I would probably describe her as a fiscal Republican, and a social Democrat. All of the characters in the movie are in some form of denial—even Beatriz, in fact—and I look at it as if it’s all created from a survival instinct. Because all of them have created the lives they have. Beatriz has pulled herself out of poverty by discovering healing work and being a vessel for that. Doug has this amazing business savvy and a value system that is completely built around financial gain. For either of them to shake that up at all, it questions their very survival.

Beatriz at Dinner feels very much of its moment, though no names are specifically mentioned. What is it that connects this story to the present?

It’s interesting. This film was actually written two years ago. Many people go, “Oh, it’s a result of the election” or whatever, but no. This was long before that. When we were shooting the movie, I remember having conversations where we almost hoped that once the movie finally came out, it would be with a little bit more irony and more reflective laughter, as opposed to feeling so incredibly relevant. Where we’ve arrived has been a trend building for a long time.

You’ve been outspoken about women’s rights in the past. To you, does it feel like women are better or worse off now than then?

Unfortunately, it does not feel like we are moving in the right direction at all. We elected a president who has not championed women and has really done the opposite. That we’ve given that a mandate is chilling to me. And the repercussions of that are beginning to be seen, which is even worse. The upside is people are speaking and fighting and thinking about what they believe, and they only realize that they have to stand up because things have gotten so bad.

Do you still get a strong response for Tami Taylor, who’s kind of turning out to be an unlikely feminist icon?

That was never even my intention, I was just trying to play a coach’s wife who refused to sink into the background and become a wallflower. And that carried on beyond the show, as she’s become a character representative of existing with an interior life, and embracing your complexity.

Though you were born in Massachusetts and grew up in Maryland, you’ve played a pair of major Southern women in Tami Taylor and now Rayna Jaymes on Nashville. Have you embraced the Southern lifestyle?

I did move to Virginia when I was seven, and it was central Virginia, which is quite Southern. I have a strong background in Southern culture, though we had relatives in Connecticut and New York. I feel like I’ve been able to draw from both areas, picking up little regional differences. Sometimes it’s subtle. I still think the women I met in the South were the ballsiest, feistiest women I’ve ever met, and that’s because Southern manners are very concerned with appearances. There are strong expectations placed on women. As a result of that, women have to be smart and kind of wily to devise a way around that. And the women do it with a sense of humor and grace and charm. Like saying, “Bless your heart” as the ultimate put-down.

I read that you briefly lived in China. Was that wild? My friend lived in Shanghai for a while; she has light hair like yours, and she said everyone kept touching it and taking photos with it. Is that legit?

There was a lot of that! Generally, and this was a while ago, strangers such as myself and other white college students were regarded as very strange. It was my freshman summer, I was a young kid, everything was so new and kind of scary, but also one of the greatest adventures of my life. Later in life, when I was at Dartmouth and discovering that I wanted to pursue acting as a career, I never regretted studying Chinese or majoring in Asian Studies. Because I always felt like learning about a different culture and an unfamiliar set of ideas can only help a person understand humanity.

If you were to invite three people to a dinner party, living or dead, who would it be?

[Pauses thoughtfully] Obama. [Another long pause] Trump. [A third, carefully considered pause] And Putin. Guess what? Let’s get down to it, folks. I’m the moderator and soothsayer, trying to get the truth out of this.