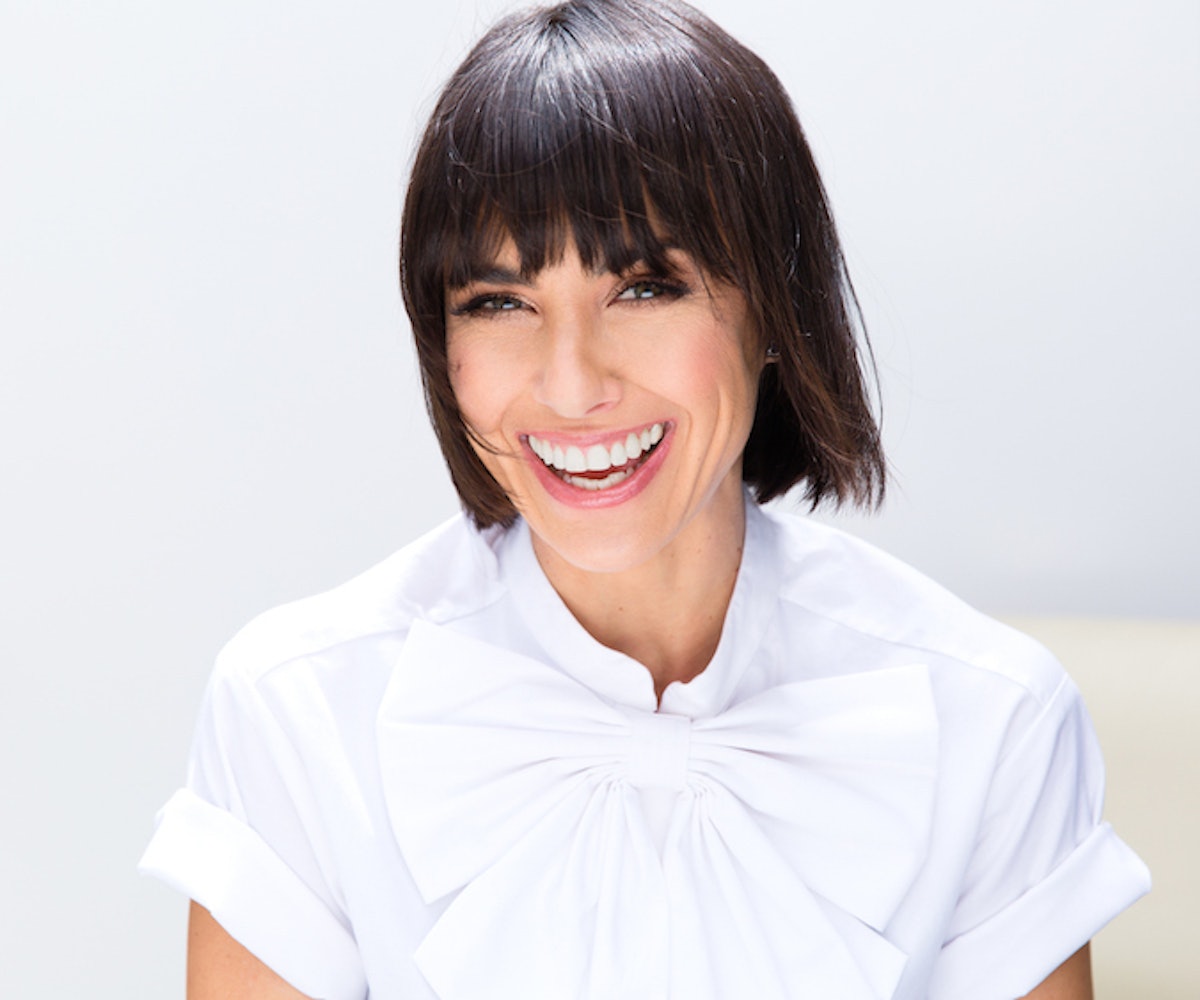 You might know her as the mega-bitch Dana Gordon on Entourage. Or, you probably caught her as Janine Skorsky, the no-bullshit journalist and rival-turned-friend of Kate Mara’s character on House of Cards. Or, maybe, you watched her spit biting insults as spokeswoman Taylor Warren on The Newsroom. Soon, you'll be obsessed with her Cersei-Lannister-of-reality-TV turn as Quinn King in UnReal, a show that is already garnering serious praise for being a too-true commentary about reality television and the way we love watching women tear each other down. You see, there’s one common thread you can always count on with Constance Zimmer: She kills at playing a blunt, sharp-as-a-tack, and straight-up badass, not-be-screwed-with lady. And, she’s happy to do it. “At first, I didn’t like being put in this box as the strong, assertive, very confrontational woman. But, I’ve really embraced it! I’m very proud to play those types of characters. They’re so unfiltered—I love it!”

Though she may come off intimidating on screen, we’re happy to confirm that in real life Zimmer is welcoming, kind, and cucumber-cool. That said, like most of the women she portrays, this actress is 100% authentic. Today, with two shows premiering next month, a handful of recurring guests spots, and a couple movies in the can, it’s safe to say Zimmer is having a major moment (UnReal premieres June 1, Entourage hits theaters June 3). We sat down with the actress in L.A. to discuss how she manages to keep her head on straight. Consider this her bona fide guide to staying true to herself in an industry that is about as un-real as it gets.

You’re doing a lot right now, yes? Two shows? More? Is this the busiest you’ve ever been? Yes, this is the busiest. I’m starring on UnREAL, which premieres June 1. I’m still possibly recurring on House of Cards—that’s open-ended right now. But, then, I’m also recurring on Complications, which is a new show that premieres June 18. And, then I have two movies that are coming out within three days of each other—they’re both small parts but it’s still a lot with press and everything. Oh, and I have a cartoon! I’m a Transformer!

I’m sure your daughter thinks it’s cool that you’re a cartoon. Yes—well, if she was a boy, it might be a little bit cooler. If I could get a voice in My Little Pony or Littlest Pet Shop, I’d be like a god in her world. Because she can’t see anything I do—everything is inappropriate! Any time a kid comes up to me and says something like, ‘Oh, you were so great on Entourage,’ I say, ‘Where are your parents? I’m pretty sure you shouldn’t be watching that show.’

What’s the best advice you’ve ever received as an actress? I had an acting coach say to me, "You are enough." But, it’s a very hard thing to do—to know that. I think it was a lesson in simplicity.

What do you do if the director you’re working with is making choices you don’t agree with? It’s difficult. What happens is, as the actor being on camera, we kind of try and have the last say. A lot of times it’s about compromise and saying, I will meet your needs, but you have to let me meet my needs. I would definitely never be combative with [a director] I didn’t like or agree with. There would just be a lot more talking. I would just tire them out with conversations, and backgrounds, and reasoning and justifications.

So, what you’re saying is you could’ve been a litigator. Exactly. Yes. [Laughing]

How do you handle competitive friends in the business? Those people aren’t necessarily in my life anymore because it’s too difficult. What happens is, you get to a place in your career and there isn’t competition anymore because everyone is working. Everyone has found his or her place—and, we’re all very comfortable with our place. It’s the people who are not comfortable with where they’ve been put, and they’re constantly trying to break out of it and reinvent themselves. I think that’s true with any competition in life or in any business it’s from people who are not happy with where they are. I’ve really tried to surround myself with a group of friends that are all really supportive of each other. Because, when your group of friends succeeds, you succeed.

Being a mom in the business, how to you find balance when you’re just so damn tired? There’s always that statement of, ‘You can’t have it all.’ But, here’s the thing, it depends on how you define what ‘having it all’ is. Having it all [to me] is having a home that feels nurtured and a career that feels nurtured. And, making sure that you don’t lose yourself or your friends in the process. Yes, it’s a lot of work—but, I’m willing to put in the work because I love my work, and I love my family, and I love my friends. And, truthfully, the best friends are the friends that know, ‘Oh, she’s working right now so she’s busy and needs to be with her family—I’m cool.’ And, I could not talk to them for six months, but [when I do] it feels like I saw them just yesterday. Anything is possible if you set your sights to a believable goal.

Have you ever had a love interest in a film that you’ve found kind of vile in real life? Yes [laughing]. Yes, I have.

Do you like doing TV as much as movies? I do! There are so many outlets now with TV. These days, the content [for TV] is actually better than most of the movie scripts I read—it’s incredible. The mini-series—like True Detective and Olive Kitteridge—the content is incredible. And, to be perfectly honest, I’m definitely happier with my face on a small screen than on a big screen. I love television—it’s been very nice to me.

When you’re acting, do you have to let go of all vanity? How do you handle if you don’t like the way your character’s made to look or dress? It depends. If the character has no vanity, than it’s much easier. But, I mean, it’s still your face. House of Cards is the most raw I’ve ever been because David [Fincher] wanted all of the actors to not really wear a lot of makeup. He wanted it to look real, and not just like a bunch of actors on a TV show, which I appreciated and 100% agreed. But, still, when I watched those first couple of episodes I was like, ‘My career’s over. I’ve never looked worse.’ So, of course it affects you. But, in the end, it is all about the character. If the character’s vain, it makes me more vain.

As an actress, I’m sure you’ve had your share of letdowns and disheartening moments. How do you handle those moments in life when you just can’t catch a break? Since having my daughter, it’s much easier to break out of that disappointment and that rejection. But, before I had a family, there was a lot of cursing. Definitely a lot of cursing. Sometimes getting out aggression by hiking or just realizing that so much of this business is out of our control. And, you have to not take it personally. The best lesson you learn is that ‘it’s not about me. It’s about so many different factors.’ Having been rejected hundreds and hundreds of times over and over again, you [realize] it’s just part of the game.