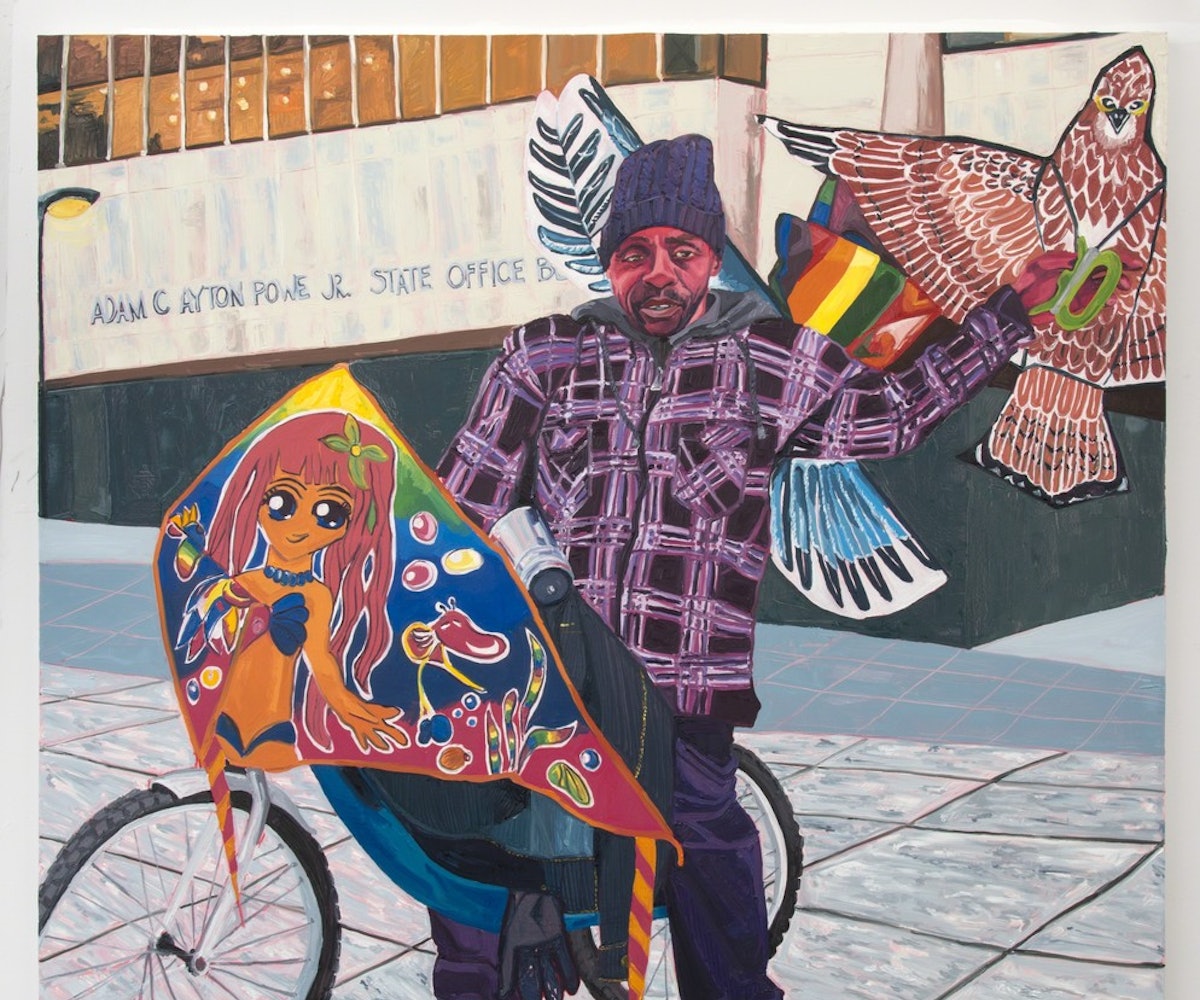 When some people think of present-day artists, they think of modernized, post-internet art; they think of Banksy’s spray can street style and the many sculpture-building disciples of Jeff Koons. They think of neon, of plexiglass, of digital manipulation, filmic influence, and a matrix-like future of expression. Of course, these things do exist and thrive in the contemporary art world, but lovers of classic art traditions need not fear: There’s still a pulse on that type of artistry too.

In fact, there’s an entire collective of traditionalists who exist among the contemporaries, even if their off-line, unplugged artistry doesn’t always get the spotlight it deserves. Below, meet some of the most accomplished contemporary-classic painters who are just as plugged into the future as their peers, but are also holding their own and fighting to preserve a time-honored mastery in the art world of today.

Despite his picture-a-day style Instagram presence, it takes Gauld at least a month to complete a painting; and despite the fast pace of the contemporary art world, he isn’t in a rush to mass produce. Deeply inspired by the Old Masters, Gauld is best known for his still life paintings that depict timeless scenes laced with symbolic references, with some modern Easter eggs thrown in—yes, that’s a stainless-steel butt plug beneath that gorgeous array of azaleas and poppies.

Gauld’s photorealistic style is jarring at first glance, and there’s always something surprising to notice in his slow-reveal scenery. And while he can easily appreciate his contemporaries' more modernist approach to technique, he’s happy to hold on to the practices that his 14th-century forefathers encouraged. Gauld tells NYLON:I believe that when we create we should always be putting forth new ideas and new works of art. But to do something new, we have to know our past, if only to reflect on it. So my inspiration comes from a wide range of historic painters that lived hundreds of years apart and are as diverse as Giotto to Jean-Baptiste Oudry to Alice Neel. With my own art, the psychological draw of skillfully crafted works is often my entry point to understanding deeper meaning. I feel a greater satisfaction spending a month or two working on one painting than taking a faster and perhaps less purposeful means to creation. I find the hours obsessing over subtle color shifts or polishing a surface like a tile meditative. The process then is very much a part of the conceptual content of the painting. While I respect my peers' choice to indulge in more immediate and contemporary mediums and practices, what drives me and gets me excited about painting is its deep, slow history, For me, the launching point for something new is like unraveling a spool of thread from the past.

Casteel’s paintings evoke snapshots of friends and family; they’re frozen, yet buzzing with action, imperfect, and realistic like a capture on film. She manages to record people's identity without them realizing—as if they’ve posed for one picture while she paints another. The large-as-life scale of her paintings seems incomprehensible. On her Instagram, she gives a sneak peek of the production, but at such a young age, it’s hard for viewers to wrap their heads around the profundity of her work.

Casteel explains her process to us this way:I am simultaneously pushing against and embracing a history that has omitted my presence and the presence of my brothers. I am very much a painter, intimately drawn to the mediums' ability to present the complexities of human nature and emotion in a two-dimensional form. I grew up surrounded by the works of artists such as Hale Woodruff, Jacob Lawrence, and Faith Ringgold. I saw myself, every day, in their representations. I could imagine myself within those spaces. I am a painter’s painter, seduced by the mediums' depth and traceability. I am drawn to the way painting holds my translation and allows me to see through the eyes of all the painters who have come before.

With an attention to detail so precise and scale so tight, it’s hard to believe that Altfest’s paintings are not cropped photographs. But it’s her devotion to technique that allows her to dress a canvas like an image reflected on film. Altfest doesn’t mind if her extreme realism makes viewers uncomfortable; she relishes an opportunity to make something like a hand or a vegetable appear awkward or eerie. And while her classical artistry requires some serious attention, you’ll find that her modern output on social media is a bit less serious, featuring nail art and food. She’s a modern woman, with classic roots. Altfest says:I use traditional materials, but go by my slightly off-kilter internal compass instead of a certain method. And although my paintings take a long time to make, they don’t stand [a chance] against technology. I do need to distance myself from my phone and computer in order to concentrate for long periods of time, and that can be a struggle. That slowing down becomes its own form of visual overload in the finished painting. I look at all styles and time periods when thinking about new compositions. Right now I’m looking at early Renaissance paintings of monks’ robes and a lot of Shunga: Japanese erotic woodblock prints, from the 1800s. I am working on a series paintings of the body and fabric. In the Japanese prints,  I love how clothing and bedding both conceal and reveal the bodies. The fabric has an erotic charge of its own.

Indirectly schooled by the Old Masters, and inspired by an augmented reality that only she can see, Gribbon paints a world that I think we’d all like to live in: Her portraits are flattering and cherubic, skin is soft and glowy, expressions are natural, and scenes are reminiscent of places we’ve all dreamed about. And while her artistic discipline is very much off-line, Gribbon’s Instagram holds its own whimsy—a mix of feminine erotica and playful expression. Despite being a traditionalist, she’s exactly the kind of curator who you’d find yourself following on Pinterest, wanting her advice on how to revise your own aesthetic. Gribbon explains:I understand the need to cast off outmoded practices, and this goes on with painting on a continual basis, but I’m happy to be the person who stays behind, scavenging for useful things that can be salvaged. My most recent work uses figuration to subvert the painterly tools men have historically used in depictions of women, to look at the idea of muses, and muse-dom, which is such a silly construct. Sometimes the paintings are allegorical, or sometimes more like portraits, but I like for the women in my paintings to be actively engaged in their painted world, just doing their thing, whether you are looking at them or not. Almost all of my favorite pre-20th-century painters—Whistler, Corot, Vuillard for example—are men, which is frustrating, because we don’t have much of a matrilineage to look to. By coopting the painting methods of those eras, I’m hoping to retroactively insert a feminine voice into the artistic conversation of the time.

While Cerletty might be considered a realist and representational painter, there’s a distance between the subject and our recall for it, and that’s no accident. Cerletty is inspired by the past, and yet his style of painting can often appear as future-forward and abstract, even though you can’t exactly place the differences. You can feel the ridges of his textures, you can feel the warmth of his sunlight. He paints with a hyper sense of reality that’s too extreme to look away from. For our modern understanding, his paintings are like post-Instagram filtered images that you never thought could look so good. Speaking of, Cerletty uses his Instagram to show off his sense of humor and offer a brief look into his absurd and filmic creativity that lives outside the frame. He says:Painting goes all the way back to the caves, it's part of who we are. That history is inspiring but can also be daunting—seeing something mind-blowing like a [Jan] van Eyck doesn't exactly make me want to rush back to the studio. But luckily the form keeps evolving and allows for new ways to reflect the culture. There can be pressure to do something totally new, like [Jackson] Pollock or [Marcel] Duchamp, but I think that mindset can be unnecessarily stifling. Interrogating the form is great, but I think you can be just as radical by putting pressure on the proven traditions of the medium. For me, that often means trying to find the wiggle room within familiar imagery that might make a viewer question their assumptions about the nature of what they're seeing. Sort of like saying a common phrase in an unexpected tone of voice. Technique allows me to dial up the intensity and find that perfect balance between weird and normal, emotional and cold, sophisticated and childlike... and hopefully, that ambiguity helps maintain people's interest and makes the paintings last.

Fascinated by the many faces of women, Lennox, who is young, but not green, is most well-known for her recent show "Ashes & Confetti" at the Chelsea Hotel. The series depicts her diverse sense of self and ability for storytelling. While Lennox is self-taught, she’s not resistant to technique or education. For her, it’s all about observing the greats and figuring out how to arrive at her own greatness. And while she treasures the history of her craft, she’s a millennial outside of the studio, using Instagram to flex the urge to experiment with new mediums. Lennox tells NYLON:I often paint with a more traditional approach because [that level of focus is necessary for me]. The journey of diving into each canvas and the challenge of working with the language of color and technique in a more traditional sense takes a huge amount of focus. And it’s in these moments of focus that I'm able to expel my energy and emotions. It's extremely meditative, thus the more present I am with the painting, the greater level of truth it will have. If I'm not fully ''in" the work I'm doing, I am disconnected and the emotive value is dulled down. Personally, if my paintings were to be done too quickly, without that intense attention, they would feel insubstantial. I believe in all art forms, a translation of total honesty is vital.

Harkness’ work is most notably defined by its fantastical imagery. From afar, her traditionalism is apparent—precise representationism, painstaking evidence of small detailing, and a grand scale. But up close, Harkness’ work depicts a sexually infused fantasy world in which women literally rule. They dominate the canvas. They’re everywhere, doing everything, like an observation of wild animals being unknowingly watched. Her work, which hangs on the walls of museums internationally, calls for its viewers to stop and stare. Harkness is a master storyteller, painting is merely her medium. But you can also catch her story on Instagram, a place where she’s freely permitted to free the nipple. Harkness tells NYLON:My goal is to paint simply and cleanly, so I can paint my stories. I use museums around the world that showcase works by Old Masters like a research collection. I'm looking at how artists built their paintings from the surface to the last brushstroke. While the Old Masters keep me coming back over and over, I've been working my way through art history. From early Renaissance painting with its simple clean tones and no complicated underpainting to Salvador Dali whose oil paintings are pure magic. Traveling through art history is a never-ending process of discovery. It's exhilarating, like when you go shopping and find that perfect accessory you didn't know you needed. I'm especially intrigued by painting trees because it would seem like a straightforward thing, painting a tree. But the way you paint them can betray your art historic influences and add unintended layers of meaning. It's hard to paint a tree that doesn't look like someone else's tree.