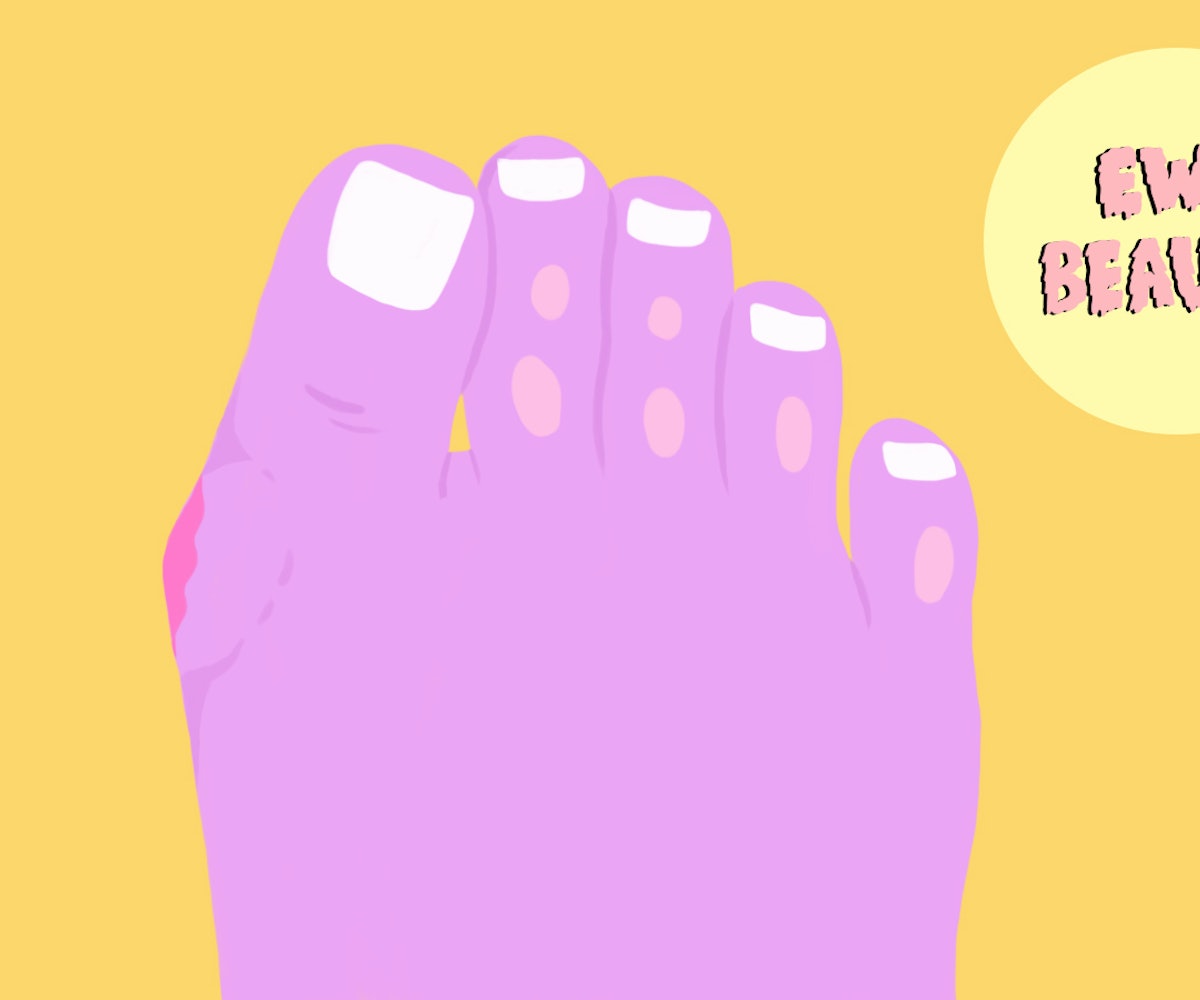 Let’s face it: Along with summer’s heat, humidity, and other sweat-inducing qualities comes a ton of gross beauty problems. From dry, cracked feet to ingrown hairs and chafing, there’s a lot that can hold you back from living the confident poolside life you’re destined to lead. But don’t worry—we’re talking to experts about how to fix them. Welcome to Ew! Beauty.

Unlike our hands or our faces, our feet often don’t get the attention they deserve—likely because they’re usually out of sight, out of mind for half the year. But sandal season is officially here, and now that it’s hopefully sticking around for the long haul, we thought it was time to talk about a condition that plagues more women than you probably think: bunions and corns. Yes, we’re going there and, no, it’s not a condition that only affects grandmothers. Here's what you need to know.

Corns are calluses (or a thickening of skin) that form, most commonly, on the outside of your tiny toe or wherever bony prominences are present. Don’t think too hard into the name, though, because the tiny protrusions don’t resemble the food so much as they do... little hard saucers. Sorry for that visual.

Bunions, on the other hand (foot?), are a different thing altogether. According to the Mayo Clinic, "a bunion is a bony bump that forms on the joint at the base of your big toe. It forms when your big toe pushes against your next toe, forcing the joint of your big toe to get bigger and stick out. The skin over the bunion might be red and sore."

Corns are commonly caused from the bone pushing up against ill-fitting shoes that then put pressure on the skin. The toe develops that hard, callused layer as a way to protect itself. They can also develop as a secondary condition from a hammertoe, podiatrist Dr. Bobby Pourziaee explains, which is basically when, instead of your toe facing forward, it curls downward, making it more susceptible to rubbing up against shoes and causing that friction.

Hammertoes, and therefore corns, are typically hereditary and same goes for bunions. So, it’s completely fair to blame mom and dad for your feet woes in this case. Podiatrist and luxury footwear designer Dr. Joan Oloff says the condition forms more often in people who are flat-footed or whose arches have collapsed, those who have abnormal bone structure, or whose ligaments are excessively flexible.

Outside of getting new genes (just kidding), the most common method to prevent corns and bunions from forming or getting worse is shoe choice. “Be mindful of the footwear you wear, as it can play a significance in the progression of deformity,” Dr. Oloff says “Make an investment in your footwear, as it is also an investment in your long-term health.”

It’s important to note that though paying attention to the kinds of shoes you wear can help reduce bunions from progressing and getting worst, Dr. Oloff says, it won’t stop them from completely forming. “Bunions develop even in populations that never wear closed footwear,” she says. As we mentioned, they’re hereditary, so, she says, paying attention to the underlying structure and mechanics of your foot before they even start to develop is important. Both doctors point to custom orthotics, or foot inserts, as the most effective preventative measure.

“A custom orthotic used on a daily basis will stabilize the joints in the mid part of your foot, and, by doing that, it slows down the progression,” Dr. Pourziaee says. “It doesn’t change what you have, so if you’ve developed it to a certain point, it will stop it at that point.”

Bunions and corns, while inconvenient, are totally conditions you can live with, especially if you manage to control both in their beginning stages. But if the condition starts to worsen and veer into painful territory (or if you’re just not crazy about how your feet look with them, which we totally get), there are a couple of treatment options.

For corns in the early development stages (meaning not too thick or irritated), you can apply salicylic acid, soak your foot in warm water, and then use a pumice stone to rub off the calloused skin. If you are experiencing pain, Dr. Pourziaee says, you can assuage it with padding or even cortisone shots. There are also soft tissue stretching devices called Dynasplints which, he says, are “probably the best nonsurgical way to try to treat bunions or hammertoes.”

Otherwise, if you’re looking to rid your foot completely of your bunion or your overly thick and irritated corns, surgery is going to be your best bet. If your wallet allows, Dr. Oloff says, it definitely shouldn’t be discounted. “If surgery is the best solution, please do not avoid it. The techniques we have available today allow for minimal downtime or discomfort. There is no need to continue to suffer!” As always, though, consult a foot professional to find out the best option for your specific condition.