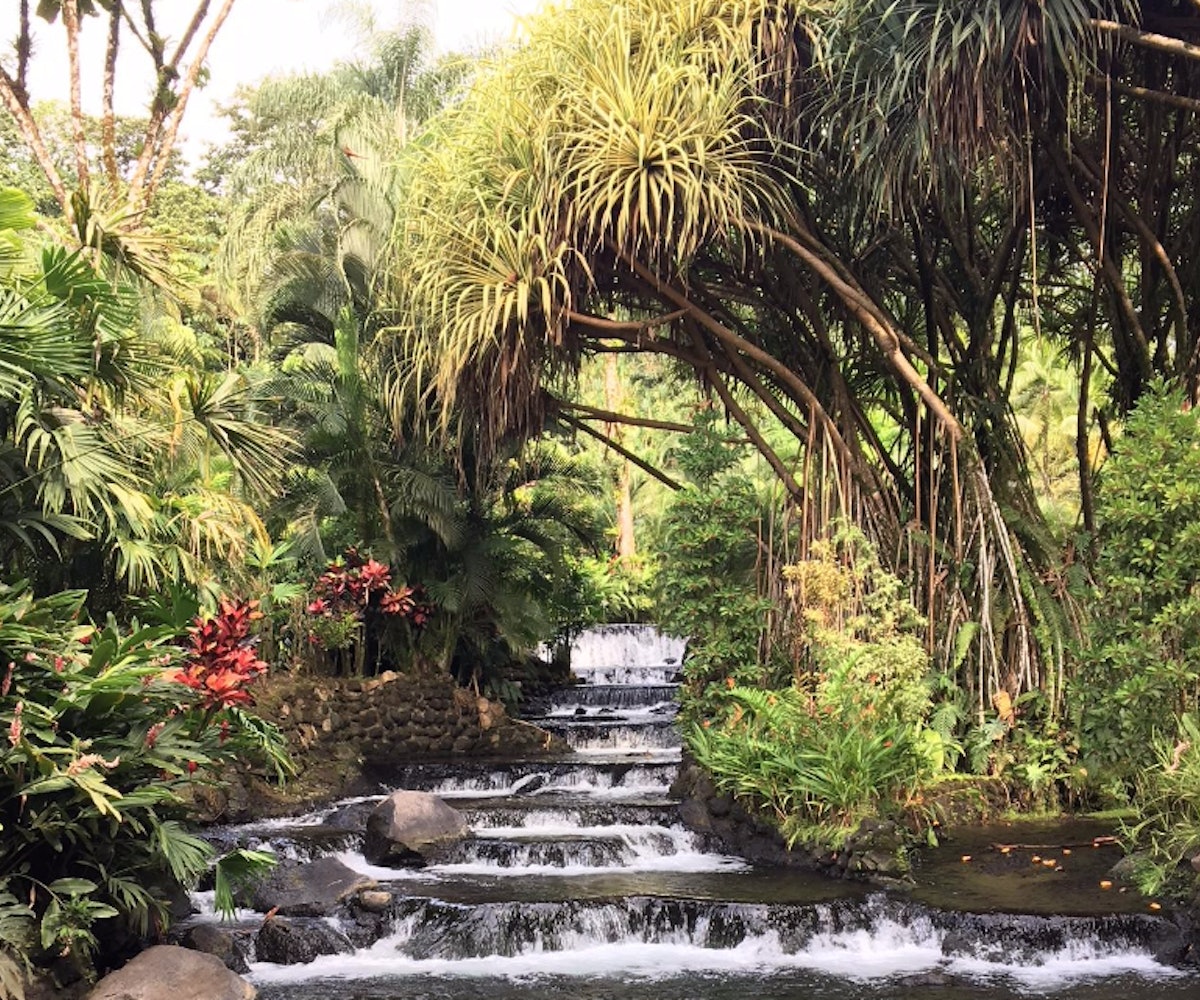 By the time I was ready to leave Costa Rica, I had grown accustomed to the following things: the sight of monkeys lounging on branches overhead, dangling their fur-covered limbs far above the ground; luridly colored flowers greeting me at every turn and at every hour of the day (flowers at night are my favorite, those unexpected flashes of life in the darkness); the cacophony of birds, insects, and frogs serving as a constant soundtrack, their voices getting caught in the sticky air; the looming specter of a volcano which, though dormant, was a breathtaking sight, especially when the morning mists had blown free of its crater, ridding it of its shroud.

I was spending a few days in the center of the Central American country, nestled right up next to its red-hot heart; volcán Arenal hasn't erupted since 2010, but the potential for a sudden explosion of fire and heat was hard to forget about completely, especially if you do as I did, and spent many of your waking hours lounging in the natural hot springs at the Tabacon Thermal Resort, whose waters are kept warm as blood—warmer, really—by the volcanic activity beneath their surface.

I had been invited on an adventure trip, and while the most adventure I usually encounter in my New York City-based life revolves around waiting on, running for, or being stuck in the F train, I was completely ready for the... adventuring that lay ahead of me. I wanted to get out of my head. I was completely ready for a few days during which my mind wouldn't be cluttered with the horrific—but, of course, necessary—stories of powerful men doing despicable things. I wanted to have to think only about the things right in front of me. I wanted, if possible, not to think at all, and just to feel, just to act and react.

The reacting began from the moment I stepped off the plane and into the typical chaos of airport customs. I had thought long and hard before coming to Costa Rica about whether or not I wanted to get a data plan, or if I would just stick to Wi-Fi those times I was in my hotel room. In the end, I decided on the latter. I wouldn't need to be online in the same manner I usually am at home (i.e. all the time). And so, at the point when I got out of the airport and into a van to begin the long, winding (like, very winding; like, people take Dramamine before doing this) drive to Tabacon, I was about to enter the longest stretch of time that I'd been without my phone, without access to friends or family or work or media, in many years. It felt liberating. It was liberating.

Because there's no doubt that if I'd had the opportunity, I would have been refreshing Twitter or Instagram instead of looking out the window at the breathtaking views, the carpeted top of a green rainforest that extended as far as my eye could see. But I put my phone away, and even when I did have the ability to use it, I didn't. It wasn't the time for it, nor the place.

In fact, it's good that I came to terms with that before I even made it through passport control, because much of what I would wind up doing over the next couple of days were activities that weren't at all conducive to bringing along a phone. It became quickly clear to me that this wasn't going to be a trip about taking photos (even though, truly, there might be no more photogenic place on earth than Costa Rica, whose lush landscape and vibrant colors laugh in the face of any filters you'd even think of applying).

There's no safe way, after all, of taking a phone with you while zip lining hundreds of feet about the jungle, or Tarzan-swinging over a cliff (thanks to a last-minute joke by my guide about whether or not my harness was completely on, I let loose with a truly Tarzan-esque scream), or galloping up a volcanic trail on a horse named after a morning star (and yes, I do mean galloping; Lucero was a frisky thing). I did take my phone with me on a nighttime jungle walk, and I'm glad I did, because how else would I get anyone to believe me when I tell them about seeing spiders the size of my face or a cockroach that reminded me of home (love you, New York).

But it was on my final full day in Costa Rica, on a whitewater rafting trip down the Sarapiquí River, that the body-over-mind experience fully came into play (and my phone stayed safely in the van). There was a group of us on this trip, six people with minimal if any experience rafting, and nerves were high among many about the possibility of falling out of the boat and into Level 3 and 4 rapids through which we'd be floating. I wasn't nervous. I was almost nervous about my lack of nerves, but because I didn't want to get too into my head, I focused on soothing any fears of the other people on the trip, promising them that there was nothing real to worry about. We had a well-trained guide, after all, nothing could go wrong.

And nothing did, except: Within five minutes of pushing off into our hour-and-a-half long rafting journey, we went through rough, churning waters, and one member of our group flew up and out of the boat and into the water among the rocks. "Paddle! Paddle!" Our guide shouted from his perch at the back of the boat, and there was nothing to do but keep looking forward and putting my oar in the water over and over again. In my head, I kept thinking about the instructions for what to do if I, too, fell into the water: Point your feet downstream. Don't try to stand. Float, don't fight. It seemed like it took forever before our missing member was back in the raft. It probably took about 45 seconds. As soon as we got out of the rapids, we rowed to the shore. We caught our breaths. She, the one who had fallen in, was breathing easiest of all. She was calm; it was like she was still floating. I tried to think of something to say. I thought, It was a trial by fire, but by water, but... "It was like a baptism," I said to her. And the thing is, even though I didn't fall into the water myself, even though nobody else fell into the water for the rest of that rafting trip, and instead our whole group worked together as one, laughing and screaming and moving forward together, I felt like I'd been baptized, too, reborn, the shroud lifted. We all shared some beer, Imperials, when we got back on dry land, a mini communion, we were missing only the bread.

Later that day, I went back to the hot springs in Tabacon, back to where the water is warmer than blood, where it wouldn't surprise you one bit if you turned a corner and saw a dinosaur plucking leaves off a tree, or a snake offering you an apple. I took off my robe and sank into the water, which feels softer than air on your skin; I sifted the black sands under my toes; I let my fingers wrinkle up; I felt any residual stresses smooth out. It's a funny thing, to think about finding a place to escape your problems, especially if your problems reside mostly in your mind, if they're the things you just can't shut out, you just can't stop thinking about. Sometimes there is no escape. Sometimes things need to be dealt with, processed, learned from. And other times, well, other times, it can be okay to run—or, rather, fly—away for a few days, to get back in touch with a time—and in a place—that seems almost primordial, where you can feel like a part of the natural world, part of something bigger and impossible to explain or overanalyze. Sometimes, that's all the escape you need, and the feeling you get when you're there never fully goes away.

NEXT UP
Ask A Witch
Ask A Witch: How To Survive The Holidays With Hoodoo Magic
Culture
The White Lotus Will Return For A Third Season
Culture
Not One, But Two BTS Documentaries Are Coming
Entertainment
20 Spiritual Gift Ideas For An Aspiring Witch