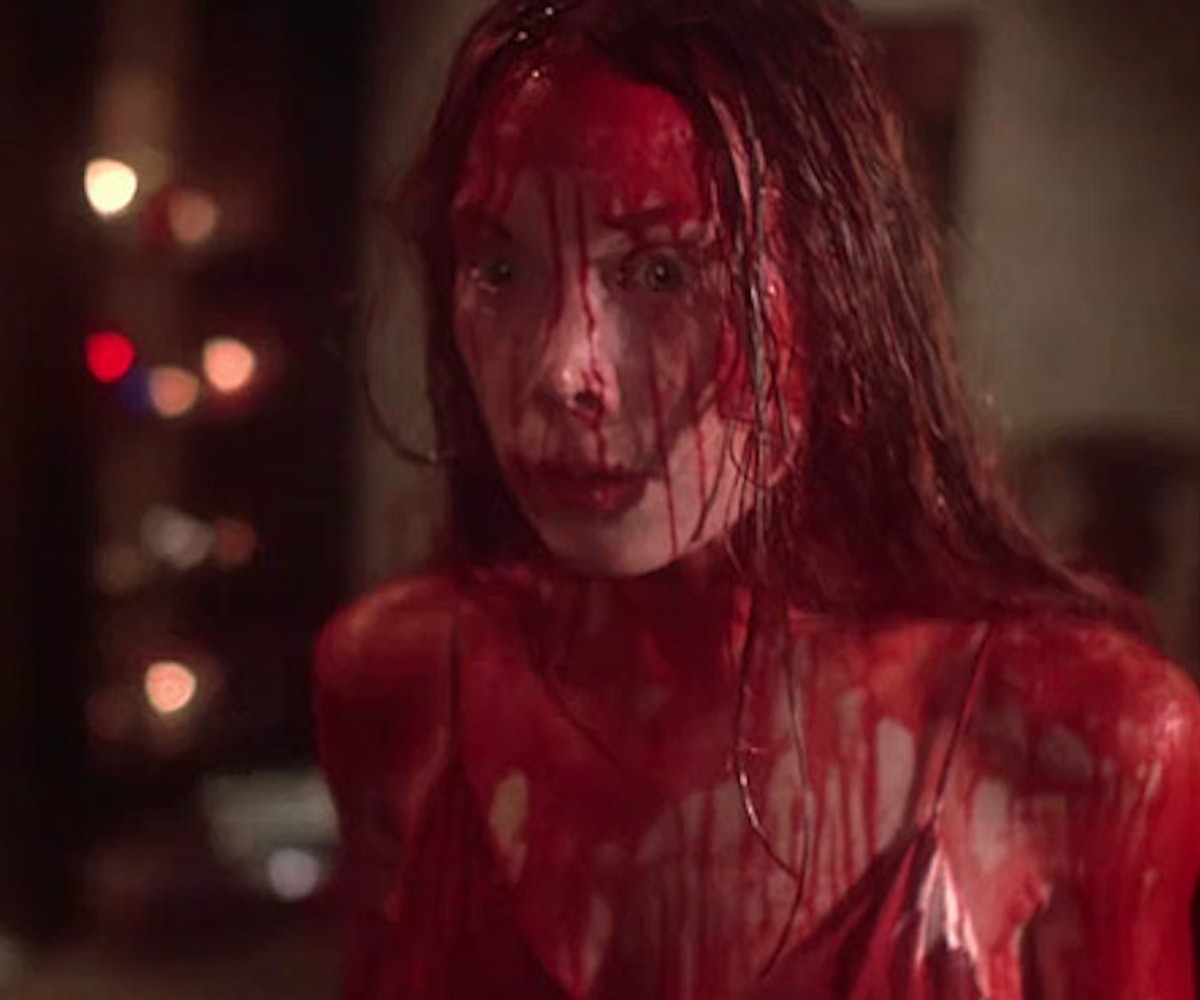 Brian De Palma's 1976 Stephen King adaptation, Carrie, is an icon of horror. What better time than Halloween to explore the fashions of this scary and deeply sad portrait of teenage loneliness? Maybe it's silly to talk about fashion in a film that famously opens with a shower-set nude scene. But De Palma is a master of not just stylized, split screen-filled thrillers, but also of fashion. Many of his films, from Body Double to Blow Out and Scarface, feature memorably over-the-top outfits. In Carrie, the fashion isn't quite so outré, but it captures the moment and demarcates the social differences between shy, troubled Carrie White (Sissy Spacek) and her peers.

Carrie, to put it mildly, isn't like other girls at her high school. Her classmates all wear bell bottom jeans or flowing skirts. They're all casually dressed and ultra-'70s in their style. Carrie, on the other hand, looks like she could've come from the '50s, with her cardigans and commitment to modesty.

Carrie's fashion sense is an extension of the film's central tragedy. These conservative outfits are likely the choice of her abusive, religious mother (Piper Laurie). At times, Carrie looks like she might drown in her oversized sweaters. Carrie sews, and it's telling that the dress she makes herself for the horribly fated prom night is a pale, classically pretty but more revealing than usual slip dress—a dress which, of course, prompts her mother's infamous comment about "dirty pillows." Even when Carrie makes her own outfit, building a fantasy for herself, she is still hemmed in by fundamentalist insanity and the cruelty of her peers, until she gets her telekinetic revenge as the dress is rendered unrecognizable by blood.

In the film's eeriest fashion moment, Carrie home from prom night, washes off the blood and changes into a long, prim nightgown. Her mother, also wearing a long nightgown, attacks her, and she fights back. The nightgowns match in an unsettling cultish way, and it's clear that Carrie, more than ever, needs to break free of this relationship, and the mandated clothes that come with it.

Compare this to the other matching clothes we see in Carrie: Carrie's tormentors are often seen in their gym uniforms, which are school-mandated but revealing. Carrie can't slip on a gym uniform so easily.

Carrie's chief tormentor, Chris (Nancy Allen) has no qualms about wearing a halter top to school. Carrie, meanwhile, shields herself. Her stack of books may as well be a part of her outfit.

Carrie's homemade prom dress, then, holds a world of possibility. This could be the dress that frees her, that lets her feel confident. We see her smile wearing this dress. Carrie may still be shy, but in this unforgettable, terrifying denouement, she's wearing what she wants for perhaps the first time. Knowing that Carrie made that dress makes the scene even harder to watch. She doesn't find love in this dress, it ends up ruined and she kills people in it. Fashion doesn't ultimately provide a path to freedom and happiness for Carrie, though we desperately wish that it would.