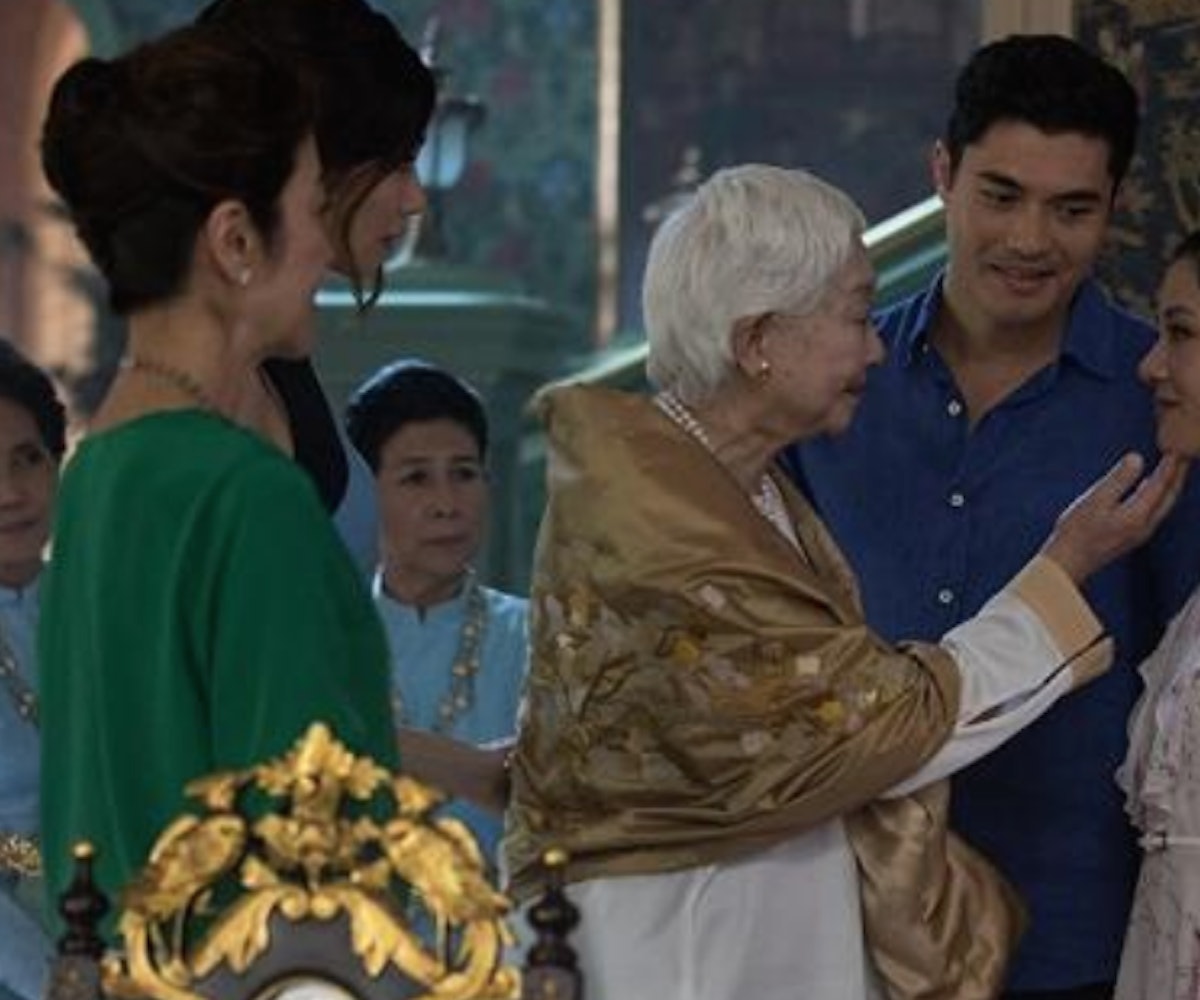 The premise of Crazy Rich Asians wouldn't feel out of place in a Jane Austen novel. A young, Chinese-American economics professor from a working-class background is plucked out of her NYU lecture hall and whisked off by her Ken Doll boyfriend to meet his absurdly wealthy family in Singapore, and is subsequently immersed in a world of opulence, label fetishism, and Trump Tower-inspired bathrooms. But beneath the familiar premise is one that is rarely ever seen in American popular culture, one that addresses a dilemma well-known to the children of Asian immigrants, namely, the cost of straddling the divide between old and new worlds.

Aside from the headline-grabbing assertion that its very existence is a long overdue win for Asian representation in Hollywood (which, no shit), Crazy Rich Asians is notable due to its focus on a much-overlooked part of the East Asian diasporic experience: the curious way that traditional Confucian values butt heads with Western-instilled ideals of individualism and independence. And so, while this classic fish-out-water story is set in the exclusive Singaporean milieu of Asia’s notoriously flashy nouveau riche, it is one that any second-generation Asian will recognize.

Within Crazy Rich Asians, this push-and-pull is probably best evidenced by the clash between Rachel Chu and Eleanor Young. The otherwise even-keeled Rachel—played by the equally unflappable Constance Wu—struggles to find her place amongst her boyfriend Nick Young’s (played by newcomer Henry Golding) unfathomably wealthy family of real estate developers. Meanwhile, Nick’s mother, Eleanor (a role flawlessly carried out by screen legend Michelle Yeoh), is on a mission to make sure that American Rachel, a woman of strong-willed self-determination and a career-oriented mindset, does not rub off on her son.

And while a Westerner's automatic reaction would be to chalk up Eleanor’s derision toward Rachel to her classist attitudes and adherence to what are seen as "traditional Asian values," we learn that the underlying social dynamics behind Eleanor's reaction toward Rachel are a lot more complicated than they may initially appear. As with any mother, all Eleanor wants for Nick is happiness, and to many Asians, bred on staunch, family-oriented Confucian values, the promotion of the family's interests is the primary source of that. To respect one’s elders, to obey your parents, to unquestioningly carry on your family’s legacy, to eschew "selfish" decisions—these are all ideals that also carry a spiritual connotation, because familial relationships are seen as a “manifestation of the sacred.” The idea that your parents know best is practically mandated by the universe, so what's the easiest way to sabotage your own eventual happiness? Openly defy what your parents think is the right thing to do and, in turn, reject what is deemed best for your family as a whole in order to chase something you think you want.

Over the past few decades, though, the rise of capitalist globalization (and its individualist tendencies) has completely upended Confucian tradition for many Asians, particularly those who’ve immigrated to Western countries. Now, “happiness” based upon familial ties is not as prioritized, and its existence is fraught, leading to inter-family relationships speckled by guilt and, in some cases, resentment. Thus, the young Asian-American experience is an especially polarized one; admittedly, as a second-generation Asian-American, I have a very specific experience of this, but have intimate knowledge of what it is like to grow up with relatively conservative, Confucian-influenced values while being immersed in American culture and its emphasis on the notions of individuality and autonomy.

In an era of feminist rhetoric, this divide becomes even more fraught, as the things Rachel has grown to value as an American woman—her career, her independence, her ability to provide for herself—are things that tend to be interpreted as "selfish" within more traditionally minded Asian women. As a dutiful daughter, your primary responsibility is to maintain the home, to be the glue that holds the entire family structure together. And while this (frankly, sexist) idea isn't necessarily unique to Confucian-influenced cultures, it's undeniable that the Enlightenment-rooted philosophies of self-determination and individuality have changed the way East and West approach ideas of responsibility, especially when it comes to the role of women. To Asians, attempts to change course from what has proven to work over time—especially when jeopardizing something as important as the stability of your entire family—is so selfish, it almost comes off as callous. And as Eleanor herself points out over a family dumpling-making session, after her marriage to Nick's father, she gave up her own law career in order to prioritize her new family. So to think that Rachel has other ambitions is almost too irresponsible and self-involved to bear.

Popular culture's consistent promotion of the "American dream” and individuality is so taken for granted by most of us that when it is pushed back against, as it is with the character of Eleanor, it feels truly revolutionary. But it's a familiar clash to countless young Asian-Americans, who know what it is to be made to feel “selfish” whenever they’re faced with choices that may not align with the harmonious order their family may believe is the path to happiness. And perhaps this is why so many young Asian-Americans, including me, have gravitated toward Crazy Rich Asians. It's not just about the representation, but it is also thanks to the fact that we finally have a movie that adequately depicts the highly familiar push-and-pull between our worlds, the old and the new. It’s a dynamic that’s often difficult to explain to our peers and colleagues, but it’s a very real thing, and now it's finally being portrayed on the big screen, in a blockbuster movie, for all to see—but most of all, for us to see. As I told my brother over the phone through tears, on my way out of the screening, “You’ll know exactly why this is the only movie you’ll have to see this year.”