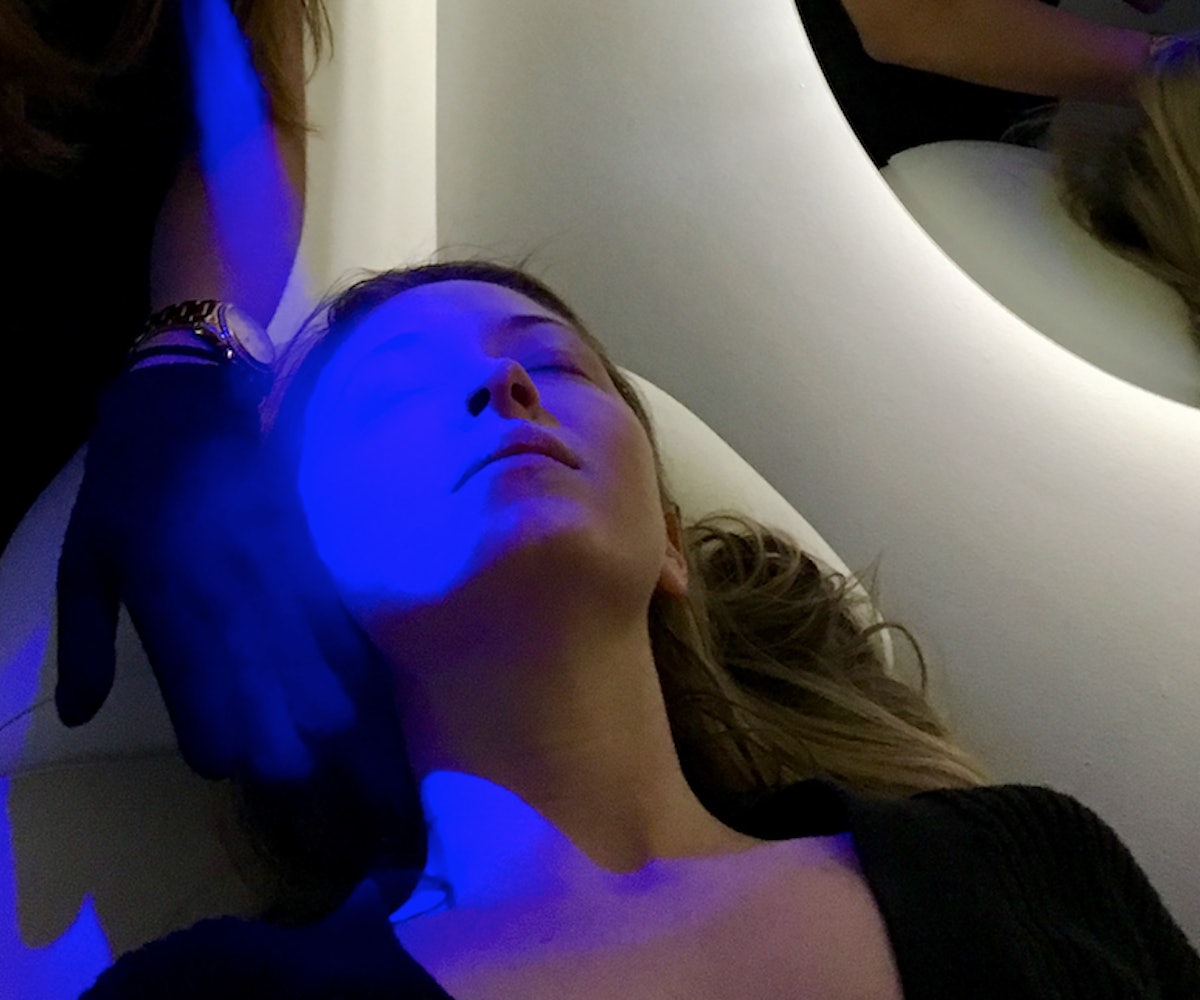 It wasn't just that one friend asked me this after learning that I'd gone into a full-body cryotherapy chamber, in which I stood for three minutes while the air was first warmed to 160 degrees and then cooled to between -249 to -321 degrees by an infusion of liquid nitrogen vapor; it was that everyone asked me this.

Other than that, though, yeah, I was totally naked as the air around me cooled to such an extremely low temperature that if I had been wearing anything with, say, metal, in it—like an underwire bra or a necklace or bracelet—I would have risked having my skin burned by the freezing wires or chains.

Well, obviously, the point is to feel good and also to look good (or at least feel better and look better), and so that is why, in recent months, I've experienced everything from an infrared sauna (I liked it!) to an LED bed (I liked it!) to, most recently, the full-body cryotherapy (and cryo facial and oxygen bar) at New York City's Quick Cryo, a cryotherapy center in TriBeCa whose website explains that cryotherapy is a "biohack," which means it is "a technique or technology that exploits the body’s natural processes to dramatically impact health and weight loss." (If this all sounds very tech and/or finance bro to you, well, you're not wrong, but we'll get to that later.)

In recent years, cryotherapy has attracted a number of notable adherents, including elite professional athletes, like LeBron James. The idea is that this type of extreme cold, when endured for short bursts of time, dramatically reduces inflammation, as well as significantly helping with the recovery process for injuries, and potentially doing things like increasing energy, facilitating better sleep, and serving as a mood-enhancer. Plus, one three-minute session in a full-body cryotherapy chamber is said to burn between 500-800 calories, which, look, may or may not be an effect in which you're personally interested, but it's pretty easy to imagine it's a compelling sell for many.

I went to Quick Cryo for a pretty simple reason: I was invited to try first the full-body chamber and later the cryo facial and oxygen bar for free, to see how I liked it. As someone who writes for a lifestyle publication, I get invited to do a lot of things for free. There's no obligation to write about them positively—or at all—but, what I've found in my months of going to saunas or being wrapped up like a human burrito in an LED blanket, is that I only ever have positive experiences (because luxury beauty treatments are, predictably, quite nice) and that I like writing about these things—and that people are really curious to know how, or if, they work.

And how does the full-body cryotherapy session work? At Quick Cryo, there are beautifully appointed private rooms in which large metal tubes stand that you climb into after disrobing and putting on protective gloves and socks. A technician stands with you during your three-minute session, which is an important element toward making you feel safe in the knowledge that it would be impossible for you to, I don't know, pass out in the chamber and freeze to death. (Which, there has been one known cryotherapy chamber fatality, but it was under suspicious, unregulated circumstances.) My technician also asked me what song I wanted to listen to while I froze my ass off; I chose Lana Del Rey's "13 Beaches." And then it got cold.

I will say that prior to going into the chamber, I was a little nervous. My only other experience with extreme cold was this time I jumped into the incredibly icy harbor waters in Copenhagen, Denmark last February, an experience I survived, but which left quite an impression on me because of the way in which, once immersed, I was in such shock that my lungs contracted and I couldn't breathe at all. It was great! No, really: I loved it and never felt more alive than after I left the water and warmed up a bit. I also met an older Danish couple in their seventies who said they went swimming daily in the water, and had for decades. They easily looked 20 years younger than they were, and it was a pretty convincing case to start taking, at the very least, cold showers every day.

But despite knowing I could survive short bouts of severe cold, I was still nervous. And yet, it turned out there really was no reason to be. While I did get quite cold, and needed to move around a lot in order to make sure that no one place on my body got way too frosty, it wasn't so much worse than how I feel standing in a subway station late on a winter night, waiting for the elusive R train. I mean, I was ready to be done by the time the three minutes were up, and the last 30 seconds seemed to take a lot longer to tick by than did the first 150, but still, it wasn't that hard to endure. And it was completely worth it for how I felt after, which was, in a word, great, and in a lot more words: like I was experiencing the most extreme endorphin rush since the last time I ran a half-marathon.

I practically bounced all the way from Quick Cryo to my office. I had a huge, stupid smile on my face for the rest of the day, and what felt like endless reserves of energy to expend. I didn't want to sit still, and yet I didn't feel agitated at all. It was great. I loved it. And that night, I slept like a baby.

So when I was asked to come back for a cryo facial (in which -160 degree air was directed over my face in order to, as per the Quick Cryo website, "speed up the metabolism in the area, increasing blood flow by up to 4 times normal, reducing signs of aging, evening-out complexion and improving skin tone by promoting collagen," I jumped at the chance. The cryo facial didn't give me the same endorphin high as the full-body experience, but it did make my skin glow and what's not to like about that? And prior to the cryo facial, I sat with Quick Cryo owner John Hoekman at the oxygen bar and breathed in an infusion of oxygen and essential oils while we talked about the benefits of cryotherapy.

Though cryotherapy isn't recognized as—or regulated by—the Food and Drug Administration as being a proven effective therapy for the many things it claims to help, that doesn't mean cryotherapy doesn't have a lot of research (and anecdotal acclaim) attached to it. Like infrared saunas and LED therapy, cryotherapy has been used by sports doctors and other physical therapists for decades in order to treat the body's many woes and improve over-all well-being. That said, some studies have shown that the effects of cryotherapy are not really needed for those of us who aren't elite athletes, and also that any benefits realized might just be placebo effects.

And yet: Call me a sucker for placebo benefits, but I will totally hop on the feel-good bandwagon if it's actually making me, you know, feel good. Who cares if it's all in my head? In the words of Fiona Apple, so's everything.

But at what price should a placebo—or even a genuinely effective therapy—come? The thing that stands out with all the different, weird treatments I've tried, is that none of them are what you'd call cheap. At Quick Cryo, one three-minute session of full-body cryotherapy costs $85; discounts can be had if you purchase sessions by the pack, and an unlimited monthly pass costs $600. Which, as Hoekman explained to me, is just $20 a day.

And as soon as he said that, I started rationalizing how I could afford to pay it. Because I really, really loved how I felt after cryotherapy. And I loved that it took only three minutes of my day. I might not have time for an hour at the gym or a 45-minute run every day, but I can totally swing three minutes in the morning. I started calculating what I could give up to afford this pass: no more lattes, I would bring lunch from home every day, I would only eat rice and beans for dinner. It got to be a little ridiculous. Because, in the end, what I realized was that even if I could cut back in every area of my life in order to have that $600, once I had that "extra" $600, I would be remiss in spending it on unlimited cryotherapy, and should probably just invest it or, at least, put it in a savings account. Or maybe I'd finally learn what bitcoin is! (Lol, no, I wouldn't.)

The truth is, I'm not at a place in my life when I can actually conceive of what an "extra $600" a month looks like. I don't even know how much money I would have to be making in order to spend that much on something not absolutely necessary, like... my future. This doesn't mean that I begrudge anyone who does spend it (which, based on Quick Cryo's location and everyone I saw there, definitely does seem to be mostly tech and finance people), rather that it's just not something within my means right now (or maybe ever). Would I go back on my own, without getting a session comped? Sure. It's something I've done at other expensive places that I initially tried for free, and it's something I can easily see doing again, especially for that cryo-high.

But also, I don't know, maybe I should be taking a page from the book of that couple I met in Denmark. It cost them nothing to jump into the harbor every morning, and they seemed to be experiencing, if not the exact same benefits as someone going to cryotherapy daily, at least some kind of incredible benefits, and in an all-natural way. Maybe I could come up with a reverse "biohack" for cryotherapy, then, and find an all-natural solution to a technological advancement. All of which is to say: The Hudson River can't be that bad to swim in, can it? I guess I'll see.