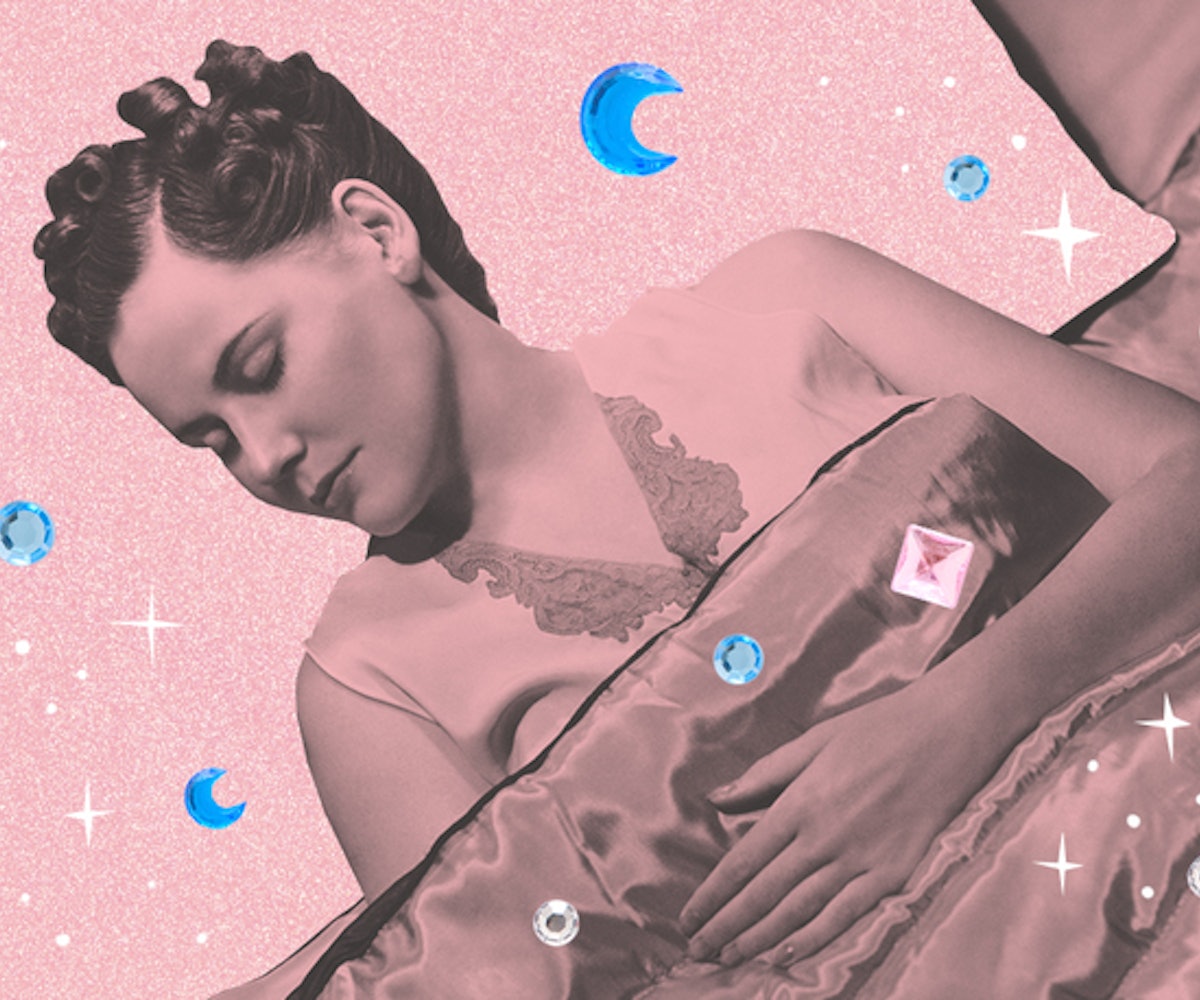 I should have known that Crystal Bed Therapy was going to be an entirely different wellness experience as soon as I was handed a piece of paper and a pen instead of a robe at check-in. "Write your intention for the session," the receptionist prompted me, seeing my confusion. "Also, select the healing frequency that best aligns with that intention." I glanced down at the list of options in my hand, ranging from "174 HZ: Reduce Pain" to "528 HZ: Transformations & Miracles" and "963 HZ: Awaken Perfect State." Did I want to allow myself "to see the truth and develop intuition" or did I desire to "reconnect with the oneness and light"?

It was Friday afternoon, and I was at Modrn Sanctuary to try its much buzzed-about service that involves laying on a "crystal bed" while a row of sharp-edged rainbow quartz crystals is suspended over the face and body of the person receiving the treatment. While Modrn Sanctuary founder, Alexandra Janelli, convinced me that the benefits were many—anxiety relief, better sleep, increased energy, emotional and physical healing—I was simply intrigued to lay on a bed of crystals—and then tell everyone about it. Was I just going to lay on a mound of quartz? Would it hurt? I wondered.

Sorry to disappoint but, at first glance, the bed looks just a regular massage bed, but with a machine attached to one side of it. As soon as you lay down on it, though, you'll notice that it emits warmth. My practitioner Edgar explained to me that the warmth is from the heating pad that covers the Biomat, whose ridges hold amethyst and tourmaline crystals that generate healing infrared rays and negative ions, respectively, when pressure (aka the weight of the person lying down) is applied. Edgar compared the effect of the bed to a "detox," with the crystals working to help with circulation, muscle tension, and anxiety, and promote brain waves and cellular metabolism. In conjunction with the heat and vibrations (the result of two transducers built into the bed) that correlate to the frequency you select, the bed helps the body recuperate and realign its energy fields.

As I laid down, Edgar aligned a bar of seven floating Vogel-cut quartz crystals, all lit with LED lights to correspond to the colors of our vortex centers (better known as chakras), to be directly above the chakras of my body, from my root to the heart and crown. He told me this ensures that the crystals shoot energy as directly as possible at those chakras and heal the body and mind. Edgar next pulled out a set of plush headphones that he explained I would be wearing for the duration of the session for the added benefit of binaural beats, which are slightly fazed sounds produced at two frequencies that influence the brain to go into a relaxed, almost meditative state that remains present and aware, a combination that allows intentions to be actualized on a subconscious level. In layman's terms, you'll be listening to lots of pleasant sounds of water, birds, and wind that will leave you de-stressed but (mostly) awake for the duration of the session.

If you were initially confused about the different frequencies, this is when the practitioner will walk you through the nine options. Measured in hertz, the frequencies are what blasts through the Vogel crystals to deliver the benefits. After discussing the two that appealed to me the most, "Return to Spiritual Order" and "Facilitate Change," and revealing my intention (it's up to you if want to do that though), we decided on the latter to "help deal with change and remove old patterns and habits." It is the production of these frequencies that, when passed through the crystals, creates scalar energy, a body energy source that "enables an optimum level of homeostasis and promotes the efficient production of DNA," according to Janelli. "When the scalar energy is coupled with your thoughts and intentions, it can allow new DNA with those intentions to be created." That scalar energy, in combination with the vibrations in the bed, heat, sound therapy, and crystals in the Biomat, open up your chakras and allow your body to "work at peak condition."

Once I was tucked underneath the crystal bar (the practitioners will make sure you're comfortable with the closeness of them) with a blindfold on my face and a blanket over my feet (the room does get a bit cold even though you're fully dressed), Edgar gave me one last tip: "Once I leave the room, state your intention out loud." While you don't have to, in fear of sounding like a new age lunatic, Edgar tells me, putting it out into the universe will reduce the need to focus or concentrate on the intention during the treatment and allow maximum time for relaxation. He then put on the headphones on me and left the room. The first thing that you'll notice is how aware your senses will be: You will hear the relaxing soundscape coming from the headphones, feel the perfectly timed-to-the-beat vibrations of the bed which pulse up and down your body slowly intensifying, and bask in the heat emitting from the mat.

For the next 25 minutes I was in this state of perfect physical being—So this is what homeostasis feels like, I thought. For the entire blissful session, I felt like I was going in and out of naps, becoming more aware as sounds and vibrations were increasing, and then falling back into a loopy meditative state, completely losing track of any time. I think near the tail end, I did fall asleep, as the last thing I remember is Edgar tapping my foot to alert me the session was over. Edgar warned me that the immediate effects range widely from person to person; while some experience a strong physical and emotional release, ranging from sadness to elation, others just have a really nice nap and come out feeling refreshed and relaxed. I was somewhere in between, meaning I was pleasantly out of it, and took a break sipping on my mint water before walking out of the room (you're encouraged to take your time to re-enter the world).

While it's hard to pinpoint what the benefits of this treatment were for me, I felt deeply relaxed over the course of the next few days and less anxious. I also felt like I had less weight on my shoulders, not unlike I felt in the past following a good therapy session—not one that leaves you gutted following an emotional release, but one where you finally feel like you resolved something and can move on to the next thing.

Did my chakras open up? Did the euphoria of homeostasis and reaching "perfect DNA expression" heal me? Not sure. But while my nap may have been cut short by Edgar, my sleep that night was the most restful nine hours of my life in recent memory, and for that alone, I would come back. Plus now I get to tell everyone that I laid on a bed of crystals, and no, it didn't hurt one bit.