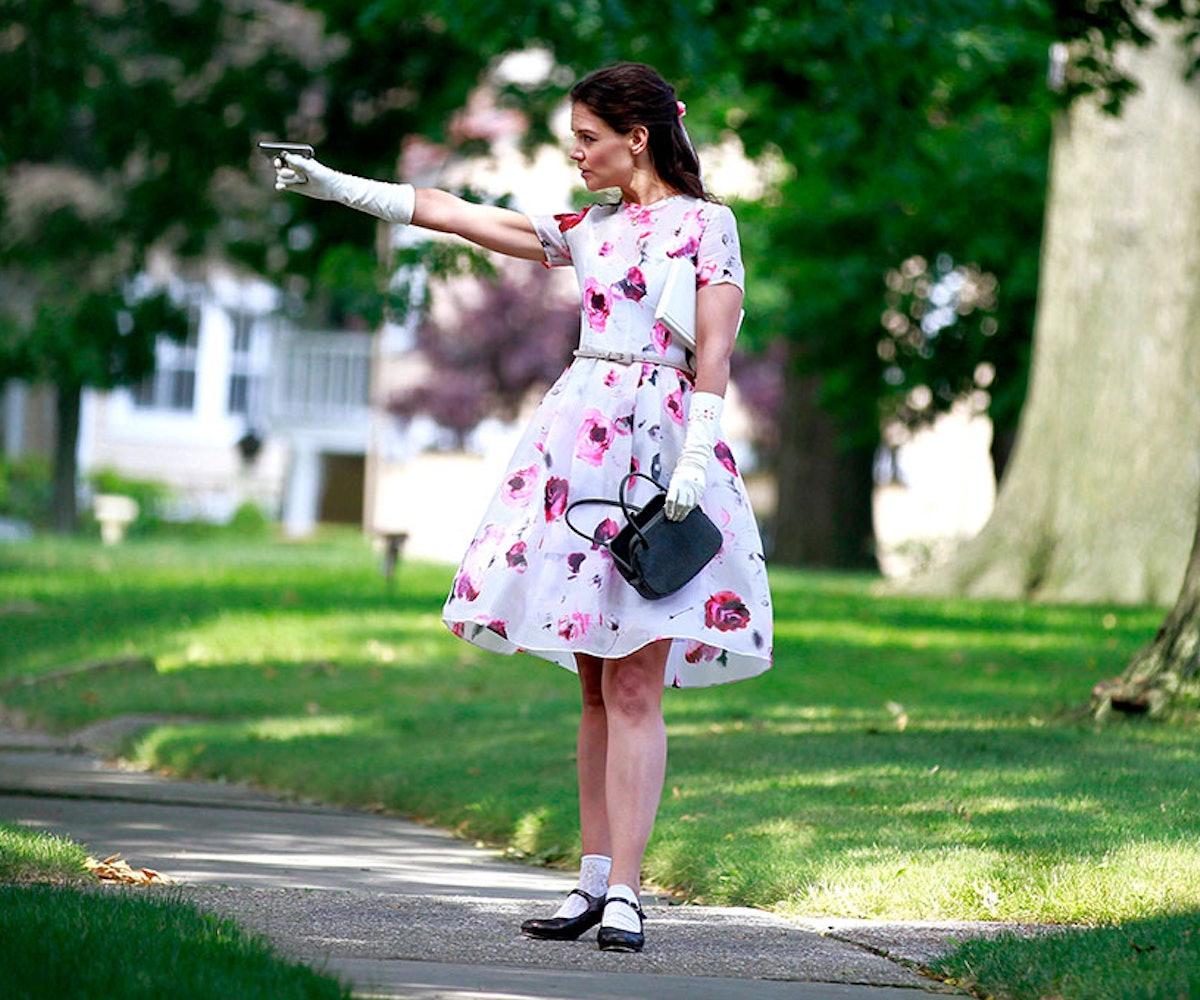 There is no exact formula for why a box-office failure or bizarre indie film becomes a cult classic. Similarly, there’s no accounting for the reasons why other equally worthy, weird, and lovable movies wind up in history’s dustbin. Why did Party Girl get the nod and not Strange Days? Why Rocky Horror and not Blood and Black Lace? Why Clueless and not its genre predecessor, Valley Girl ? Truly, what makes a cult classic a cult classic is a combination of magic and luck.

Well, we’re trying to take the luck out of the process by introducing you to a just a few of the forgotten gems that, with a little watching and little love, could shine up nicely into the new killer cult flicks you share with friends and watch over and over again. To recap: These movies deserve shine and love for being campy, smart, and totally reflective of the era in which they were created. Let's call these the unsung cult classics, shall we?

Read on for the best films that aren’t cult favorites…yet.

Karen Leigh Hopkins' directorial debut starring a pistol-wielding, Disney princess-like Katie Holmes had all the makings of a sleeper hit. It was never going to be a blockbuster, but the festival circuit seemed to enjoy it. The public, however, did not. It scored a 28% on Rotten Tomatoes, which is easily a critical flop. Miss Meadows deserves more love, though. The vigilante aspect to the main character added just enough spice to Holmes' vanilla personality, which made it a real joy to watch. In today's overly ironic age, the sincerity of Hopkins' satire was a welcome one. Perhaps we just didn't deserve it at the time.

It can be argued that Valley Girl is already a cult movie. But does it have a cult following of regular watchers who reenact scenes from it? No. Why exactly this hilarious social study of Southern California mall culture in the 1980s never took off is just beyond us. It’s funny, somewhat feminist, and smart. It even features an early, loose Nicholas Cage with a very strange accent. What else do you want?

Don’t Be A Menace To South Central While Drinking Your Juice In The Hood, 1996

If you’ve seen this Wayan’s Family parody epic, there’s about a hundred lines you could quote from it. Unfortunately, there’s aren’t enough people like you. A send up of the ‘90s wave of Black, ‘hood-centric films (Menace 2 Society, Juice, South Central, etc.) Don’t Be A Menace is as admirably goofy as Airplane! while being tartly critical of how Hollywood treats the African-American community. Come for the Wayans, stay for the Bernie Mac.

Commercially, Strange Days was not a hit. It wasn't a flop, either, but the marketing of the film as an action-packed movie and the jarring Ralph Fiennes trailer kind of doomed the film from the beginning. Strange Days was a more savvy Johnny Mneumonic and a more visionary Crow, thanks to the efforts from then-fledgling director Kathryn Bigelow (you know, the only woman to have ever won an Oscar for directing). Los Angeles on the brink of chaos in 1999—as seen from 1995—is prescient and undeniably cool, asking big questions with finesse...and including a freaking killer P.J. Harvey cover. Basically a must-watch for any '90s cybergeek.

We anticipated the debut of this New York-based, indie-styled, very adult musical starring Kate Winslet, James Gandolfini, Susan Sarandon, Steve Buscemi, and Mandy Moore (yes, you read that correctly). Then a funny thing happened: We didn’t watch it. Pretty much everyone on earth did the same, even though it was produced by Oscar magnets Joel and Ethan Coen. Recently, though, we’ve given it a shot and found a flawed film that is really like nothing else in English-speaking cinema (the French are more with familiar adult, relationship-focused musicals). We feel guilty for waiting 10 years to give this a spin.

Back then, Joseph Gordon-Leavitt was most primarily known as the skinny kid from 3rd Rock From The Sun, and Brick was shunned critically for being a little too conceptual. Calling on film noire tropes, first-time director Rian Johnson created a gritty world reminiscent of '30s film...in a high school. The whole thing requires suspension of disbelief, but the adventurousness, and intelligence, of the movie deserves its own following.

Far and away, this is the silliest movie on this list. Hell, it might be one of the silliest movies anywhere. Too self-consciously ridiculous to be bad, you’ll stare and wonder how exactly it got made and how exactly someone hasn’t shown it to you yet. Also, the campy horror mix of a Bob Hope/Bing Crosby movie and Ghostbusters demonstrates how unspeakably attractive future partners Jeff Goldblum and Geena Davis were in the mid ‘80s. Prepare to get thirsty.

There was some debate in our office as to whether or not this is a cult film already. Some of us thought it was obvious, but others have never even heard of it, much less have sat down to have their mind blown by this dark, campy Brad Pitt flick. Chomping on the heels of Who Framed Roger Rabbit's success (people AND cartoons, together!), a babyfaced Pitt lives in Cool World, as the only 'Noid (human) detective. The plot is kind of pointless, but the vision and dark, R-rated aesthetic done by Fritz The Cat's Ralph Bakshi means this one truly belongs in a time capsule, if not for this genius scene.

We thought that a faux-documentary about down-on-their-luck vampires starring Jermaine Clement of Flight of the Conchords would be a movie that sold itself. We did not account for exactly how niche our tastes are, however. This made nary a wave when it came out last year, but we hold out hope that its combination of horror and silliness will earn it a following in years to come.

Okay, like: If you are of a certain age, you would have seen this movie. It was a "thing," a cultural relic that could have only been made in the '90s with a soundtrack chocked full of Bjork, L7, and Hole, and fashion that feels cooler and more relevant than ever. But it was also a post-apocalyptic sci-fi feminist comedy based on graphic novels before that was a marketable idea. And while we still fawn over Clueless and Reality Bites, Tank Girl is lost to the pantheon because, well, it's over the top and features sex with kangaroos and a very young Naomi Watts, plus loads of dick jokes. But it deserves all of the shine of its contemporaries...if not more.

This should be an essential horror film. It also should be an essential fashion film. How many movies can you say that about? The story of a murderer run amok in an Italian fashion house, slasher maestro Mario Bava's Blood and Black Lace was a smash his native Italy when it debuted and made the rounds in American midnight movie houses soon after. And, yet, it’s never joined the mainstream American horror pantheon despite it’s visual beauty, hilarious overacting, nods to fashion, and 83% Rotten Tomatoes rating.

A mix of traditional ladder-climbing business comedy from Hollywood’s Golden Age and Ferris Bueller’s attitude, Michael J. Fox’s The Secret of My Success was supposed to be his first real “adult” film. He even had sex in it. Alas, it fell out of the popular consciousness—perhaps because it just wasn’t all that good and perhaps because it either critiqued Wall Street too much or just not enough. Whatever, this movie is the 1980s distilled and bottled. Drink it up.

Two years after The Game, David Fincher would become a household name after riding Fight Club to success. Here, though, we can see him playing by Hollywood rules but still having his way as his camera hurtles through a dark, chilling dive into paranoia and the ‘90s thriller genre. Acclaimed at its debut and a minor box-office success, The Game should have left more of a mark than it did. Let’s make that mark bigger.

Oh, did we put two Jeff Goldblum films on this list? Why, yes we did. Do they both involve supernatural goings on and hilarious, beautiful women who owned the ‘80s? They certainly do. Vibes is the less weird/less inventive of the two, but this shaggy, half-baked adventure romance may be the more lovable. Featuring the only lead turn by Cindy Lauper in a film (why weren’t there more?), Vibes is a rare thing—adorably bad. We want to hug it.

When we saw this movie, we were struck by the originality of concept and the beauty of the film, and I recommended to everyone I know to go see it. But it never really caught, which is a shame—and probably because the trailer gives away some of the most breathtaking surprises in the movie. Mike Cahill's science fiction is gorgeously understated and belongs alongside hits like Ex Machina and Moon as science fiction for the thinking type.

When Quentin Tarantino sat down to give an exhaustive interview to New York Magazine earlier this year, he spoke about his genre copycats. He says, "The one I thought was the best was by this director who never did anything else, C. M. Talkington, who did that movie Love and a .45." Cut from the same cloth of Natural Born Killers and Pulp Fiction, this gritty road-movie murder romance features a young, pre-Empire Records Renee Zellweger as Starlene, a happy-go-lucky murderess in love.

Holy moly, is this movie good. Helmed by Frank Darabont (who launched

), it features loads of

actors (Carol, Andrea, and Dale all make an appearance). The SFX aren't totally great, but the acting, the concept, and the fear are all palpable. What should have been a B-movie ends up being an A affair, even though it feels a little cheesy. Pro-tip: Darabont meant it to be in black and white, and do yourself a favor and watch it that way (there is an option on the DVD).