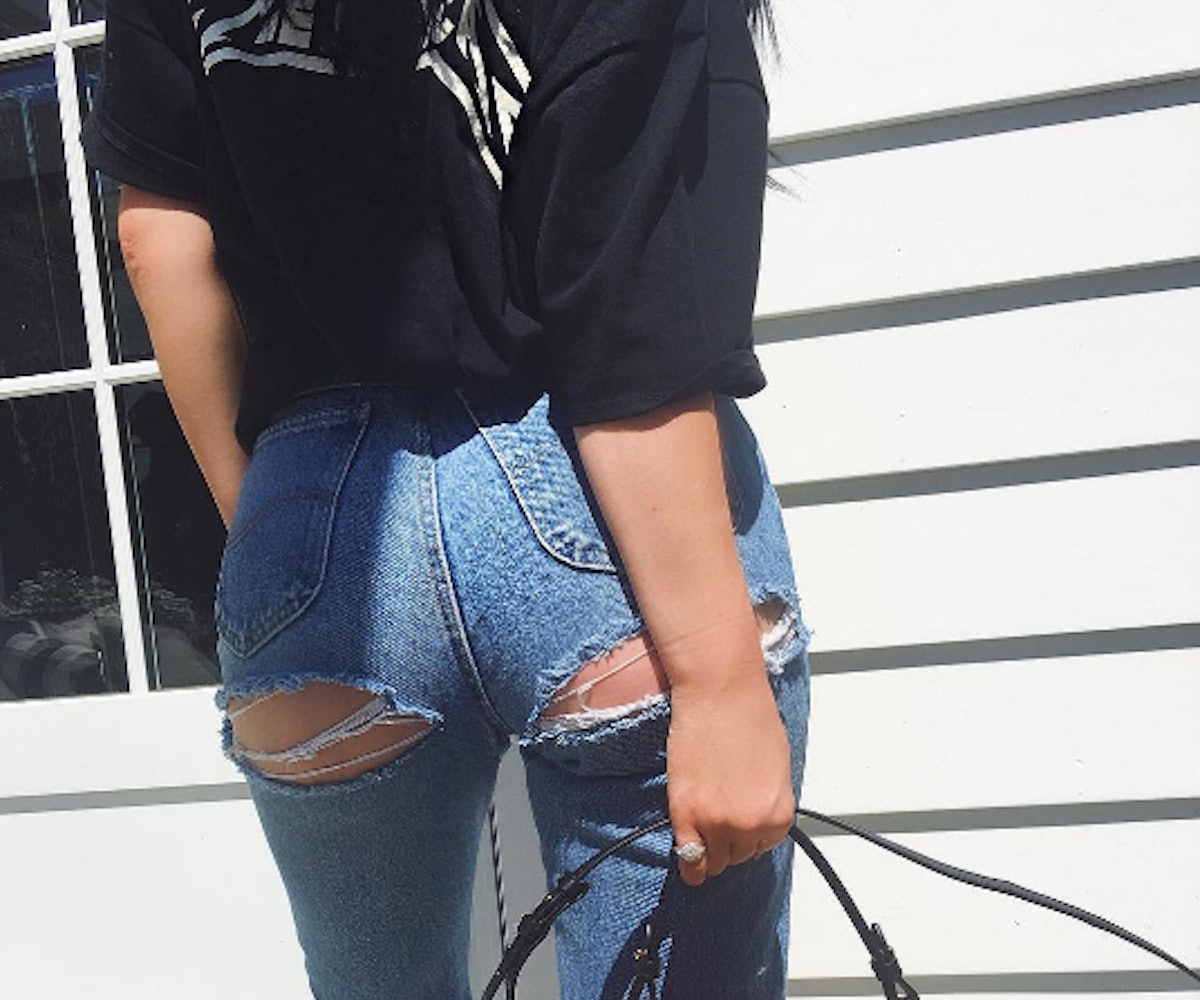 Over a month ago, Kylie Jenner posted a picture on Instagram that stopped me mid-scroll (and it takes a whole lot to stop me mid-scroll, especially from that family). It wasn’t another one of her lip kit announcements, it wasn’t even a new hair color, it was a picture of her with slits cut in the butts of her jeans.

It’s not the first time I’ve seen girls rocking the sartorial slits. I’ve seen the peekaboo trend in real life a handful of times—and, let me tell you, seeing someone’s ass poking out of their jeans intentionally is more jarring than you might expect. But it took me awhile to realize that this was a choice by these individuals. Initially, I took pity on the first poor soul I saw with the distressed moment happening on her rear end. Should I tell her? Has anyone told her? She has to feel a draft, no? How old do your jeans have to be for that to start happening? I wondered. (Oh youth! Oh old age!)

No, it’s very clearly a calculated decision. There’s no way Jordan or Justine or Tyga would let young Kylie walk out of the house mansion with such a fashion faux pas happening behind her—let alone allow her to post a picture of it. Now that the trend’s gained Kardashian/Jenner levels of mainstream exposure (because they’ve somehow become the barometer of what’s suddenly “in”), soon there will be no escaping the ass exposure. I thought it was the perfect time to stop feigning ignorance and admit: I don’t get why this is a thing that’s happening.

Like one writer at Seventeen confirmed: having your assets out in the open is weird, terrifying, but mostly uncomfortable. Not to mention, jeans are not cheap. The mother in me shudders at the idea of ruining a perfectly fine, expensive pair of denim. I truly believe the children are our future, but surely they’d gotten it wrong this round. And yet, stylist Solange Franklin thinks the bare-butt look serves a source of empowerment. Which, fair. “I think it's about not being body conscious… I think a lot of those girls are also wearing sheer tops and showing off their nipple rings and just being unafraid of their bodies in a way,” she says. “I think that they feel like they have control over them and they're negotiating how much they reveal and conceal.”

Franklin also says she doesn’t think it’s that different from cutting holes in the knee of your jeans—remember when everyone was anti the worn-in look? “I think it's about being revealing in a hopefully powerful, sexy way. Whereas showing off cleavage feels a little passé to this generation.”

For some, cutting slits in their butts might serve as their way to personalize how they choose to exude sex. “Or maybe it's just like, 'I want to show off my butt because I like my butt,' which is also cool,” Franklin says. Your body, your choice, after all.

Who knows, maybe it’s like culottes: I didn’t understand the hype a year ago, and now I’ll be damned if I wear shorts that cut above the knee. Or not, and that’s fine, too.