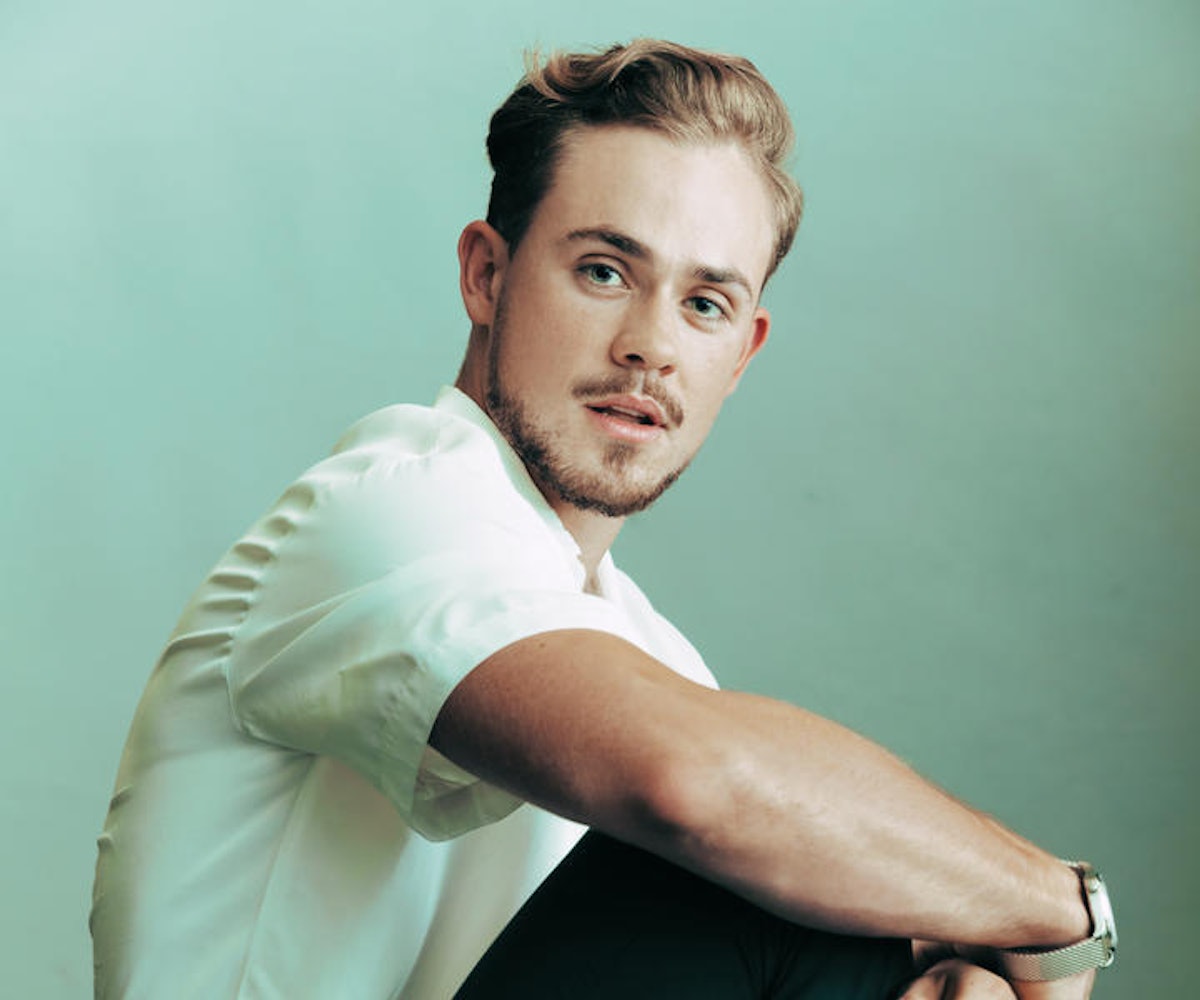 If you’re the owner of a Netflix account, then chances that you’ve recently been introduced to the talents of Australian actor Dacre Montgomery. The 22-year-old Perth native, who earlier this year starred as one of the masked heroes in Power Rangers, has been enjoying a breakout month thanks to his role on Stranger Things 2 as Billy, the hard-bodied bully that everyone loves to hate. Billy, who gets off on making his stepsister Max’s life a living hell, has divided fans thanks to an unhinged performance that has also earned Montgomery legions of admirers. Stranger Things creators, the Duffer brothers, got a preview of what Montgomery had in mind for the role when they watched his taped audition, a very important document that has recently gone viral online—and for good reason. We spoke to Montgomery recently about what it’s been like landing a role that changes your life overnight.

Did you feel a lot of pressure once you got this part, knowing that so many people would be watching?

Yeah, but I think there’s also an opportunity to really try and put some chutzpah into a role, make it something really special. If anything, it adds even more incentive to put a character in place in a world that already exists. I don’t think I felt pressure. I felt more of an opportunity.

After you were cast, how soon did the realization come that this was going to be a life-changing role?

It just echoes back to what I said before. I saw an opportunity, I was given a chance, I tried to make the most of that chance, and now, hopefully, I have opportunities to be involved in a lot more amazing stories, which is why I got involved with this in the first place. I’m very interested in storytelling and exploring, and hopefully, this gives me the outlet to be able to do that for many years to come.

Is playing an unpredictable and darker character like Billy more fun than playing the kind of traditional hero you played in Power Rangers?

Yeah, playing someone with such uncertain tendencies, you never know what’s next or what’s around the corner, but what was also interesting was finding the similarities between a protagonist in something like Power Rangers and an antagonist in this. What do these two kids who are in high school have in common? What is the hero, what is the villain, what is their connection? What are their insecurities?

This character was a lot of fun. There was a lot of room to play on set with the Duffers, coming up with ideas on the day, changing lines, stuff like that.

Did you have a lot of input on the character we see onscreen?

I think it inevitably changes when you hire an actor—they bring their own element into it. I’d say it’s 60/40—60 percent being on the Duffer side and 40 percent on mine. On the day, we’d change things because the narrative constantly changes. We’re shooting episode five, and the Duffers haven’t written seven, eight, and nine, so there are discussions that are had. That’s what’s so great about the two brothers: They are in an open forum with their actors, which provides everybody with an opportunity to evolve the character over a season rather than it being predetermined.

Did you see Billy as a purely dark character, or were you able to find a lighthearted element to him?

I think there’s something far more sinister going on, which you get a taste at the end of episode nine. In episode eight, we were actually humanizing the villain. So when we were on four, five, and six, I said to the Duffers, “Look, guys, this character’s just an angry dude, but what’s behind it?” The biggest thing to me in creating an anti-hero—somebody that people can like and hate at the same time—is to humanize this person. But I think there is something far more sinister going on that will hopefully evolve in further seasons.

Can we talk about your hair? I assume that’s a wig

Yeah, the sides of the hair are the wig, the hair on top is mine. Sarah did a great job, she’s head of the hair department. There is that comical side with the tight jeans and the earring, too. Again, it was sort of 60/40; with the hair and makeup and costume department, I had a say in that. I was very lucky there.

Do you people recognize you on the street without the wig?

It’s been crazy, dude. I thought when Power Rangers came out, it was going to be hectic, but in the last two weeks, I’ve been back in Perth, Australia, which is where I live when I’m not working. I went out the other day and I had just a mustache—a thick mustache and glasses and a hat on—and literally couldn’t move around wherever we were at, I think it was a bar or something. I think people just recognize the face shape, and anybody that we watch onscreen, I think, subconsciously, you kind of recognize their features and their gait, how they walk, everything. But I’ve got ways to hide myself now. I’m right in the middle of Sydney right now, in the middle of a square surrounded by hundreds of people, and I have my disguise sorted, which shall remain anonymous.

What happened to your social media after the show dropped on Netflix? Did it blow up?

Yeah, dude, it’s been like 800,000 people in like 12 days. It’s been crazy. You know on Instagram, how you can see Insights? It’s like gender impressions, all these things. So before it was like 50 percent men, 50 percent women, between the ages of 18 and 35. And I’ve tracked, now it’s like 75 percent women and the rest are dudes. I think in the first week, I got 30,000 messages and most of them from girls. I think also just capitalizing on this moment with a charity I work with, I’ve been uploading videos that get half a million views. The guys that run it, they rang me and said they had 10,000 donors in the first 24 hours after I posted that. I think we live in this interesting point where if you know how to and you’re interested in capitalizing on social media for good and for brand building, there’s so much potential. So I’ve just been underground, at my place in Perth the last two weeks just figuring out all kinds of different ways that I can use this to benefit me and people around me.

Your audition tape for Stranger Things leaked online and went viral. What was your reaction to that?

I wanted to take a shot in the dark when I sent it a year ago. There were just so many people auditioning for this that I was like, “I better do something out of the box.” Netflix loved it, and it’s kind of been an inside joke between the Duffers. So GQ kind of tactfully leaked it, and it’s had like two million views on Facebook and three million on other platforms. I was out at the bar the other day, and this guy comes up to me—not from Power Rangers, not from Stranger Things—and he goes, “Hey, are you that guy from that audition tape?”

What were your expectations with Power Rangers, and did you see its reception as a disappointment at all?

Look, I had an amazing time working on it. My castmates have gone on to do amazing things, it was my very first project, and I learned a lot about myself and stunt training and all kinds of stuff. We opened with Beauty and the Beast, and that was the highest grossing PG-13 film domestically ever, I think. So timing-wise, I think we had a good opening weekend, and we trickled down domestically and didn’t do great overseas. I’m very lucky that I went straight on to ST2. I’m just looking for that next story, to be honest with you, mate. I’m reading scripts now, and I haven’t taped for anything in four months. I’m not taping for stuff that I don’t really care about. I’m writing, I’m teaching myself writing. I got Final Draft [screenwriting software] about 16 months ago, and I’m learning about story structure, creating narratives, how to sell a script. I’m trying to learn the business side of things and trying to be creative even though I’m not auditioning. I’m looking for the thing that is different from the antagonist in Stranger Things, different from the protagonist in Power Rangers, and something that will really continue these two amazing opportunities I’ve been given.

Have you been tracking the vocal reaction to your character online Is that something you pay attention to?

Totally. I read everything, mate. I don’t like having a huge response because I don’t want to be involved in a discussion about it, necessarily, but I’m extremely interested in how people see the character. I’m overwhelmingly excited about the response—I feel like it’s been mostly positive and people are liking who Billy is and are really hypothesizing about where he’s going to go. I get a lot of good laughs with my mates about the mullet, and about apparently, being Zac Efron’s father from the ‘80s, which is a fan theory that’s been going around.