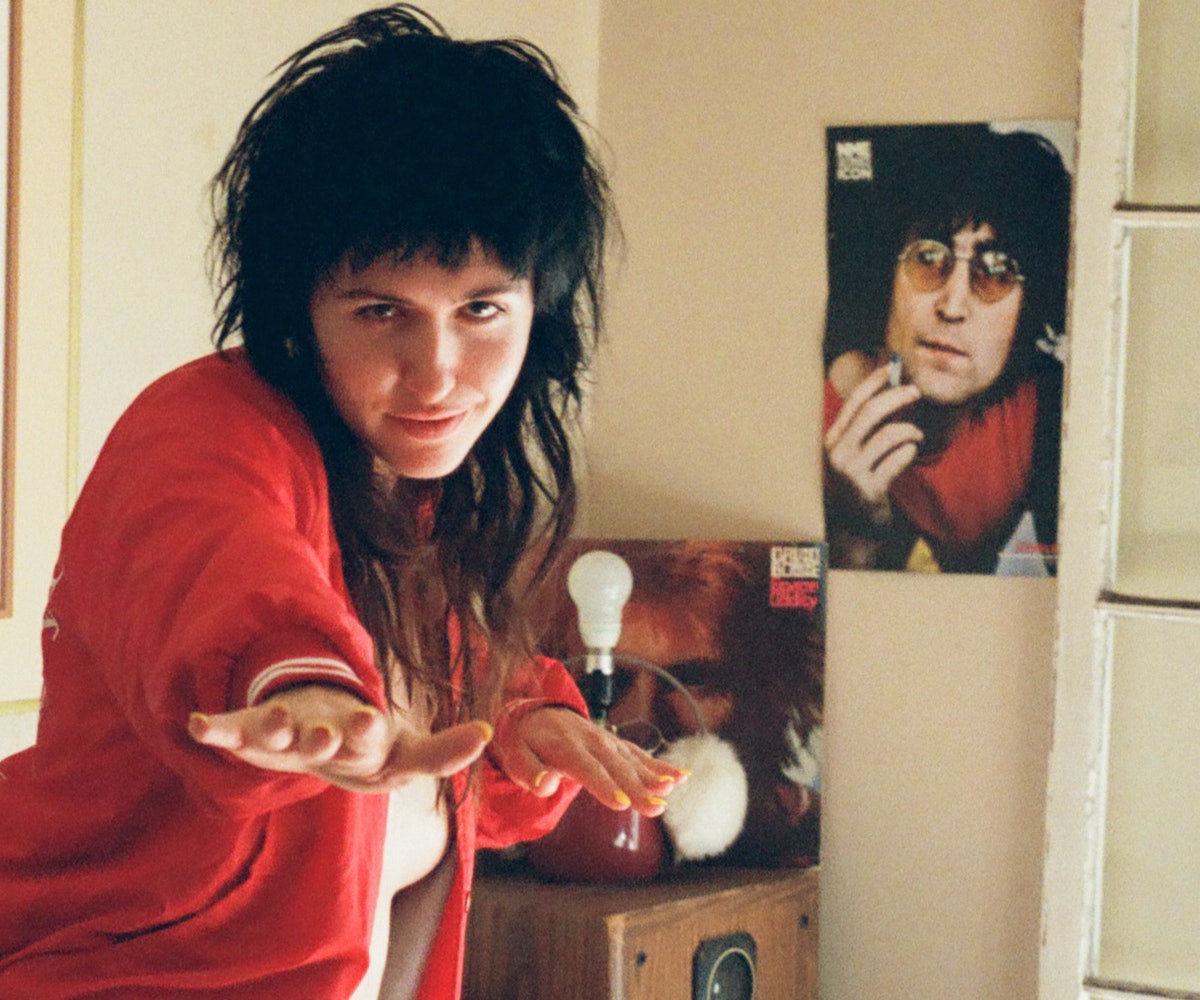 Dani Miller, lead singer of Brooklyn-based punk band Surfbort, seems to specialize in shock and awe. Between the band’s music videos—which have depicted Miller as a diabolical cherub who murders straight-laced businessmen—and her rollicking stage presence during live performances, it’s fair to label the 25-year-old a bit of a provocateur. And in the age of the vulgar rhetoric of the Trump administration, doesn’t it make sense to be equally loud and uncouth in resisting?

However, with Friendship Music, the band’s debut LP coming out later this month under Julian Casablancas’ label Cult Records, Miller wants to do more than just indiscriminately piss off Republicans. And so it might strike some as a surprise to hear the singer of a band known for its “ABORT TRUMP” merchandise preaching about the value of compassion and understanding in the face of political oppression.

“Slushy,” Surfbort’s most recent single from their forthcoming album, is a startlingly saccharine song, the earnestness of which is obscured in part by the frantic delivery and the snack-themed lyrical content. “It's about falling in love in the fall, when it's not so cold,” Miller tells us. The single, which was one of the first songs written by the band when they formed four years ago, feels like somewhat of a departure from the rest of Surfbort’s politically irreverent oeuvre. The accompanying music video still features their usual mind-melting visuals and shots of a “TRUMP IS MY SEX SLAVE” banner in the background, but the duality of the song, which Miller calls “classic Surfbort,” rings true. “We're really into romance, but then life hits, too. You have to navigate romance through all the crazy shit that goes down.”

In the band’s “Les Be in Love,” video, Miller plays a John Waters-esque interpretation of Cupid, skewering people with arrows. “That video was really fun to shoot,” she says. “It's hard because I'm such a loving person, and I'm really positive. I have so much love for other humans, and I've always been torn with the conversation of, like, do you fight all this Trump stuff with love or, at a certain point, do you have to really stand up?” Despite her character’s murderous intentions, Miller reiterates that she is anti-violence. At one point in our conversation, she references bell hooks’ 1994 essay, “Love as the Practice of Freedom,” which emphasizes the importance of love as a radical praxis. “A culture of domination is anti-love. It requires violence to sustain itself,” writes hooks. “To choose love is to go against the prevailing values of the culture.” In other words, love is pretty punk.

And also, despite the band's slight shift, their vulgarity is still intact. Jokes about fetuses and abortions are a recurring motif—from their Twitter handle (@Surfbortion) to their song “Fetus.” Miller acknowledges that the quips against the sacred entity of the fetus, which is so deified by Republican lawmakers, might strike some as “shocking or shallow or weird,” but the imagery is more than just a crass throwaway gag. “In our song ‘Fetus,’ the lyrics are: ‘Fetishizing fetuses/ race, gender, and the war,’ because that whole group of people, they’re just fetishizing and worshipping a fetus that isn't even a live human in the world,” says Miller. “They're saying it has more rights than women or other children that need homes and a family. Like, that is so insane.”

Some people aren’t totally on board with how overtly political the band is. “It’s pretty scary, especially on the internet, the shit people say in opposition to what they've heard at my shows,” says Miller, though she recognizes the importance of using her privilege. “As a white woman, I feel like there's no room for me to just be silent.” One particularly tricky incident came in 2017 when the band played Coachella and Miller had to reckon with the accusations of homophobia against owner Philip Anschutz. “I was like, ‘Wow, well fuck that, but I'm not gonna cancel the show and not play Coachella. I'm gonna get in there, get in that space, and be an advocate for queer people and just wreak havoc in that world and bring love into it,’” says Miller. “If I were to be like, ‘They have different views than me, I'm not playing, goodbye,’ that just puts up more walls, and that hasn't worked so far, you know?”

Miller is also a proponent of using her platform as a veritable Cool Girl in a Cool Band to spread the message of radical friendship. Earlier this year, the band played the opening of Gucci’s new SoHo store. “They called me up and were like, ‘We want to make this reminiscent of the '80s New York scene.’ I guess the times then were really intense too, and it inspired really raw art,” says Miller, who calls the party “a magical night.” Though the image of Miller and her ragtag band mingling among the more polished likes of Alexa Chung and Rihanna might seem incongruous, she's not one to balk at an opportunity to work within the capital-S System for the greater good. “Before, when I started the band, like, that would be selling out,” says Miller, “but right now I'm very into just being open and in conversation with all different types of people, and trying to connect worlds.”

The #Resist movement seems dominated by a distinctly millennial brand of political rage. I asked Dani, who is the youngest member of Surfbort (drummer Sean Powell and guitarists Alex Kilgore and David Head are all in their 40s and 50s), what sort of dynamic the generation gap within the band made for. “They've been through so many different political times, and luckily they have a ton of empathy, so we're all on the same page, politically,” she says of her bandmates. Miller notes that the band is, by nature, opposed to reductive, ageist sentiment of any variety, saying, “I think a lot of times, people will be like, ‘Oh, you're too old,’ or like, ‘You're old now, you can't go out, or have fun, or rage, or let loose and be creative.’”

In fact, when Miller’s mom, Meredith, asked to go on tour with the band and work their merch table during a series of shows they played with Amyl and the Sniffers, she thought it was great. “She's raging excited,” says Miller. “There are so many social pressures of thinking that when you get to a certain age, you can't do fun shit and just go wild, so it's really cool. I'm like, ‘Live your life! Do whatever! Dance, run around, go on a little trip with us.’”

Speaking of shows, Miller continually refers to the “freak family,” that has materialized around the band, especially at their concerts. “It's easy for people to be like, ‘Whoa, that's gonna be a really intense, punk show. Ahh, scary,’ but it's totally the opposite,” she says, explaining that she wants Surfbort shows to be a place of communal catharsis. “If you're a total freak and like covered in slime, or if you're a straight-laced businesswoman, business dude, train conductor, anything, I want you to just come and let loose, and get out your frustrations and pent-up emotions.”