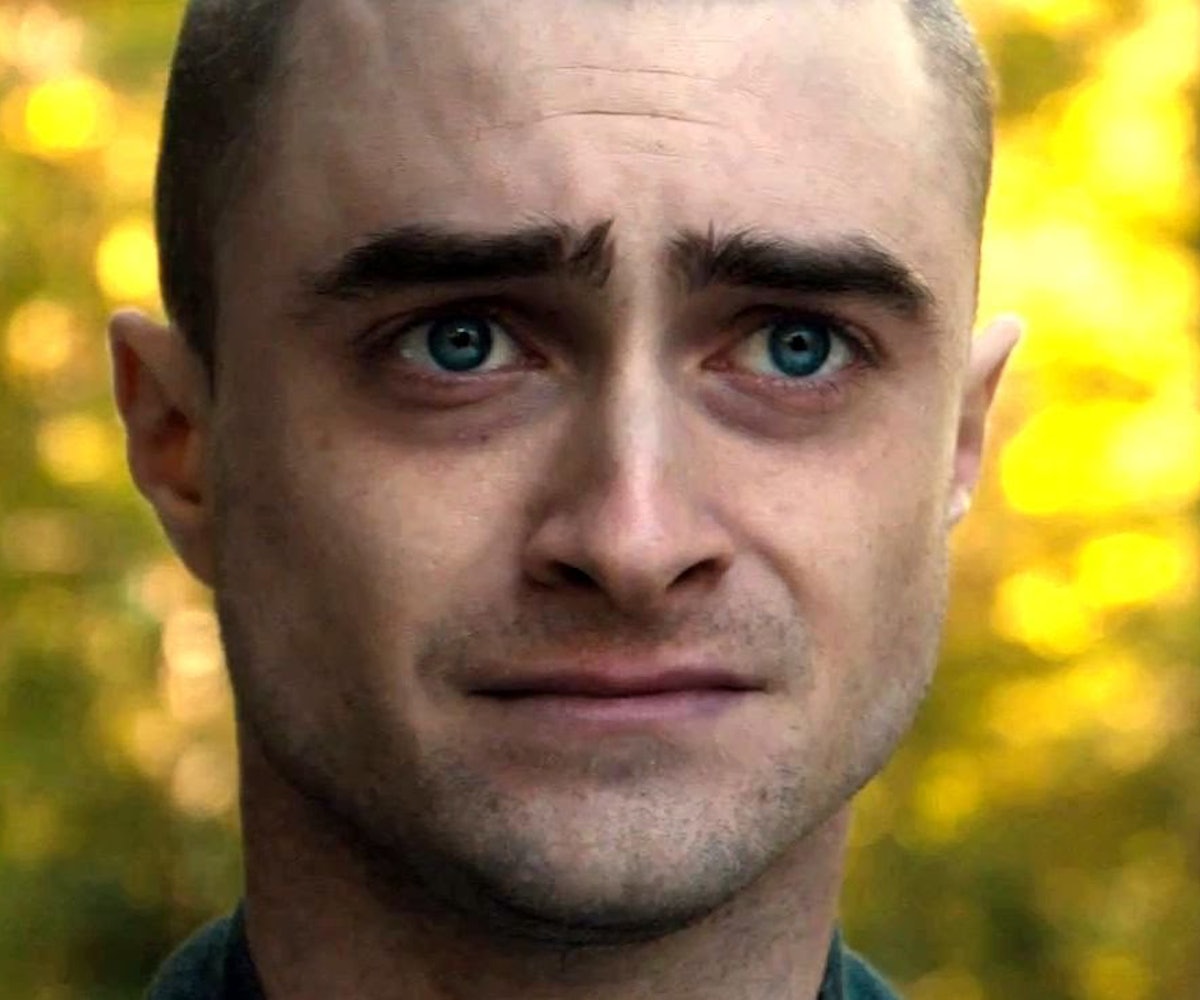 Daniel Radcliffe gave up his magic wand years ago, and yet every time he appears in a new movie, audiences can't help but notice just how different his role is from a certain boy wizard. Part of that is because characters don't come more iconic than Harry Potter, but it's also due to Radcliffe's nose for unusual and edgy material.

His latest role in the unsettling thriller Imperium is no different, with the 27-year-old star playing a bookish and brilliant FBI agent who goes undercover as a skinhead, in order to infiltrate a white supremacist group in the hopes of stopping an attack on the homeland. The movie's first-time director, Daniel Ragussis, based his script on the real-life experiences of Mike German, whose intelligence and soft-spokeness inspired Ragussis to cast Radcliffe in the unlikely role of FBI agent. Earlier this week, we caught up with both Daniels to discuss the dark nature of the world they explored, the movie's frightening parallels with current events, and whether or not Hitler was a drug addict.

Dan, when you were writing this script, did you envision Daniel as the lead? What made you think of him for this part?Daniel Ragussis: A lot of it came from my work with Mike German, who was my co-writer and the actual FBI agent the movie is based on. Mike was so different from what a prototypical FBI agent would be. He was a very literate and soft-spoken and cultured man. It was cool meeting him and getting to know how different he was from what I imagined. He explained to me that an undercover FBI agent is more about charming people in social situations and interactions and being light and being that guy everyone wants to confide in and that sort of thing. So right from the beginning, when I was designing the story, I thought that was really interesting. So when I started conceiving the character, someone like Dan became perfect for the role.

Daniel, you just finished promoting Swiss Army Man, where most of the discussion centered around you playing a farting corpse. I would imagine promoting this movie feels very different. Daniel Radcliffe: It’s been a good summer. In a way, they’re both still great films to talk about because in very different ways there’s a lot to talk about with both of them. When I did a romantic comedy, it was one of my least favorite press tours. That was the one where I eventually realized that doing romantic comedies gives people an excuse to ask you about your own life. With Swiss Army Man you could be talking about anything from animatronic dicks to having my ass molded to what a great actor Paul Dano is. And with this, it’s anything from what it’s like to actually get to speak to a real FBI agent, but also the sort of real world stuff that is linked to the movie.

Was it disturbing being surrounded by all that white supremacist iconography on set? Did it get to you?Daniel Ragussis: I had been around that material for so long that I had lost my sensitivity to it in a good way. What was most difficult for me was really the beginning stages. There were maybe three or four months where I was basically reading all of this material, everything from works that were created by people who espoused these ideologies to biographies of people in the movement. It was very dark and difficult, not only because the ideologies themselves were so dark, but because you realize that what you’re running up against is a level of conviction in these people that is so diehard, that is so adamant, that is so—to them—logically consistent and rigorous, that it’s difficult to figure out how you can get in there and change someone’s mind.

Daniel Radcliffe: I don’t think I ever quite got used to it, but much harder than [seeing] the symbols and stuff, was saying the stuff—that was tough and weird. Because you’re so aware that everyone knows you’re acting and it’s not real, but it still feels shitty when it comes out of your mouth. I was just doing a lot of checking in with the other actors after the takes being like, "I’m really sorry, I’m so sorry." I definitely don’t think you really get used to it, not in that short of a time. I think what Dan is saying is right.

Daniel Ragussis: You have to develop a tolerance.

Daniel Radcliffe:Mein Kampf is hilarious by the way, because what I realized is that it’s not just Hitler’s autobiography, it’s what he thought about literally everything—like, supermarkets! I guess because it was written in prison.Daniel Ragussis: In The Rise and Fall of the Third Reich, you would read about how at a dinner party he would sit there for like 10 hours and just expound on his opinions on everything from a play he’d seen to this and that, and everyone would just have to sit there and be like, "Oh yeah, that’s fascinating!" He certainly liked to hear himself talk.

Daniel Radcliffe: All the Nazis, they’re all off their fucking heads on drugs. Pretty much all the Allied and Axis powers during the second World War were all—Churchill was so drunk. Churchill was considered a very heavy drinker at a time when everyone drank heavily. It’s amazing when you think of all these people in power.

Daniel Ragussis: The one exception being Hitler, who was a teetotaler.

Daniel Radcliffe: He was fucking on meth! He was on speed pills and shit!

Daniel, you shaved your head on-screen, which meant that you only had one take to get it right. Was that a lot of pressure?Daniel Radcliffe: It was really fun, actually. I really enjoyed it, and it was fun as well because Dan was in my eye line and he was sort of talking me through it, and, at one point, you were like, “Can you do it a bit more violently?" Because I started doing it, and I was like, "This is going to take fucking forever," so then I started hacking away at it, and in the corner of my eyes, I saw Dan going like, “Yes!” And even a few of the crew members came out and did it in support.

Do you guys do anything on set to lighten the mood between takes or after you wrapped?Daniel Radcliffe: I think, generally we had quite a light mood on set for what is a very intense film. I think, we did try to keep things as light as possible. I remember Paul Dano told me about shooting War and Peace and that the director really did want to keep things light because when you’re doing something that intense for that amount of time, you just can’t exist in that state the whole time.

This film is largely about the power of words, their ability to incite violence, and who is responsible for that violence. That seems especially prescient in a time when Donald Trump has been using such dangerous rhetoric on a national stage. Have you thought about that parallel?  Daniel Ragussis: I take two answers to that. Number one: One of the big thematic points of interest for me early on was the power of words. I mean, when you look at someone like Hitler that’s really the only skill and tool that he had—a way with words—and we all know what that led to. In terms of the Trump thing, what I’ve said is that it’s never my intention to make a political film or try to associate this with any political party or any political figure or anything like that. I don’t think you can do that. But I think that the feeling that the communities portrayed in the film have and that the wider community has—that feeling of being disenfranchised and excluded and victimized—I think that’s a very real thing, and it’s profoundly important for us to understand that in terms of the politics that are going on here and in Europe. It’s the reason why a far right head of state might be elected in Austria. It’s the reason why all sorts of things like that are going on. The core tendency to feel victimized and to feel oppressed and to identify an "other" group and to lay your problems at that group’s feet, I think that’s a massive thing that’s really flaring up right now both here and all across Europe.

Daniel, some critics have noted this role as yet another example of you purposely trying to shed Harry Potter. Is that accurate, or are you simply choosing the best material? Daniel Radcliffe: Not every film I do for the rest of my life is a comment on Potter. I think, I get an undeserved amount of credit for trying to do lots of different stuff because all the actors I know want to do that. But it’s fine. They said that about Equus and they said that about Kill Your Darlings.

Imperium is in theaters and on demand tomorrow.