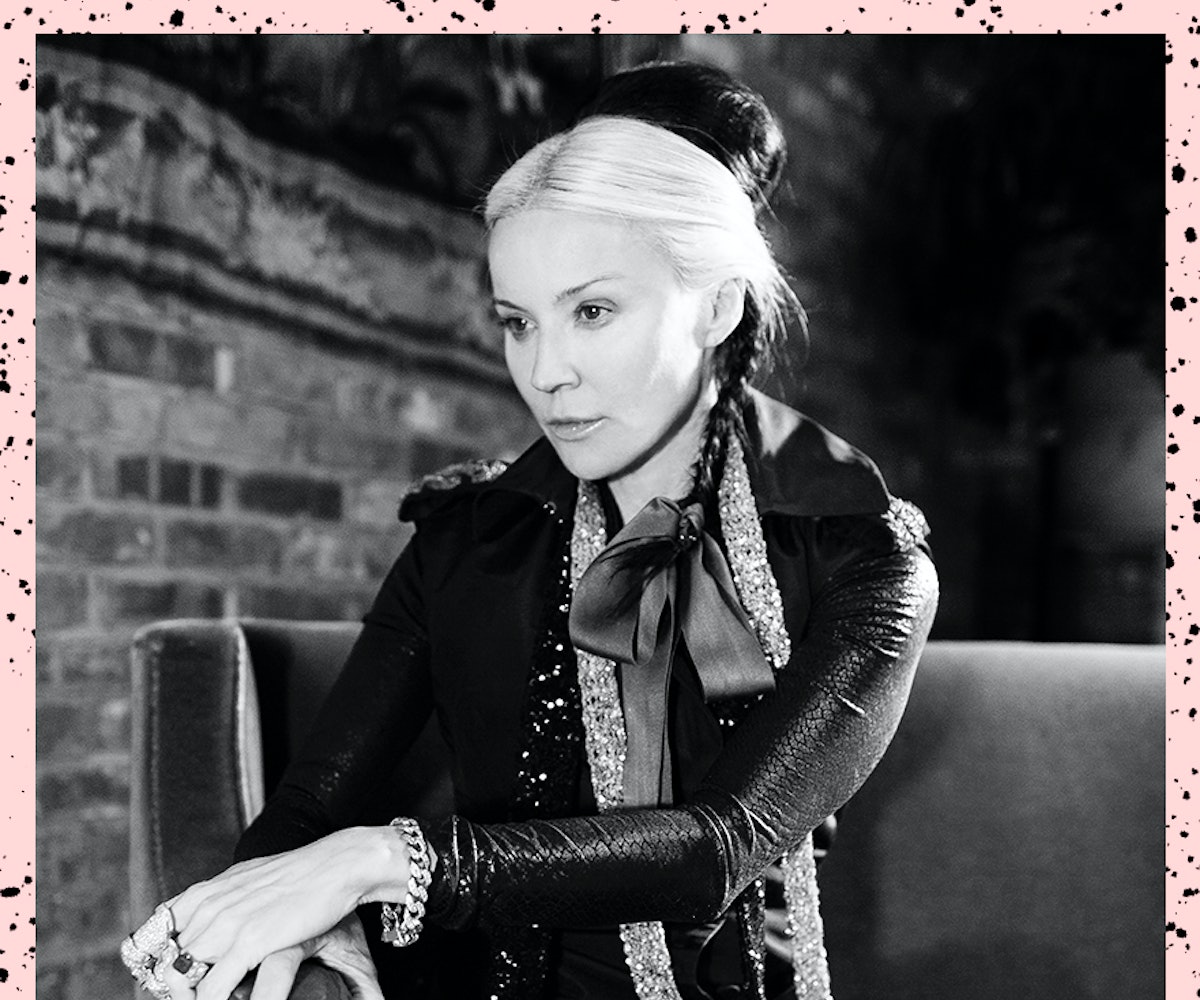 Coming in from a stormy, wet New York City day, Daphne Guinness is immediately recognizable from across the room. Indeed, she may be one of the most photographed women in the fashion world—a street style star before any of us knew what Tumblr or Blogspot was, a perfect balance of extremes. Still, her platinum white hair with streaks of black; her small, thin frame towering on her signature heelless Noritaka Tatehanas; a gently posh English-raised demeanor mixed with her Irish-born frankness—she is what happens when both ends of the spectrum meet. Which is perhaps why she chose the evocative, but clashing, title of her first album to be Optimist In Black.

She sits down and we begin to immediately discuss death. It's something that fascinates her, as she has truly been surrounded by it, from her famous relationships to Isabella Blow and Alexander McQueen, to her own mother, to the looming passing of David Bowie, whose producer and longtime friend Tony Visconti assisted Daphne with her own album. “I don’t understand why I am here, dressed in black, while all my friends and all the people I’ve cared about are gone," she says, in a slightly melancholy manner. "They’ve made the exit, the shining light at the exit. But I remain an optimist dressed in black.”

In the early aughts, Daphne Guinness stood as a front-row fixture,

, the high-society goth who helped jumpstart the career of Alexander McQueen and basically created the style that put Lady Gaga front and center. But with the one-after-another deaths of her famous friends, plus her brother, she has since retreated from the spotlight, returning to the passion she knew before she became a multi-hyphenate model/muse: Music. Guinness was accepted in the prestigious Guildhall School in the U.K. to study music, but she passed it up. “The best things that never happened was

going to music school. They would have ironed out all of those weird turns." The weirdness is what makes the music special. It is soaked in dramatics, demanding poetry, sweeping theatrics, and of course, darkness.

is truly listenable if not macabre, a curious, spiraling, and strangely catchy album, impeccably constructed. Yet, the whole thing feels like an exorcism of Daphne's own ghosts, peppered with her own lyricism. The title song, "Optimist In Black," is a truly difficult listen to anyone who has dealt with loss. "It’s not about it being a number one hit or even part of the industry," Guinness explains about her songwriting endeavor. "It’s a dark, dark, dark poem.” Like any dark poem, the album feels out of time, taking its DNA from Siouxsie And The Banshees, Nico, the depths of Nick Cave, with a distinct Visconti touch of glam rock.

For anyone who is familiar with Guinness' trajectory, it is hard not to read her own personal narrative into her music. But, perhaps that's what so engaging about it. It feels like the work of someone who has played witness, who, as she says, "The only one left standing." But within that, she finds a bit of raucous hope, especially in songs like "Magic Tea" and the psych-fueled "No Armageddon." Remember; just because you are wearing black doesn't mean you are depressed. “Music should be fun—and everyone is dealing with heavy topics. Everybody’s got shit. Music is the only way out, I think. When everything goes wrong, write a song.”