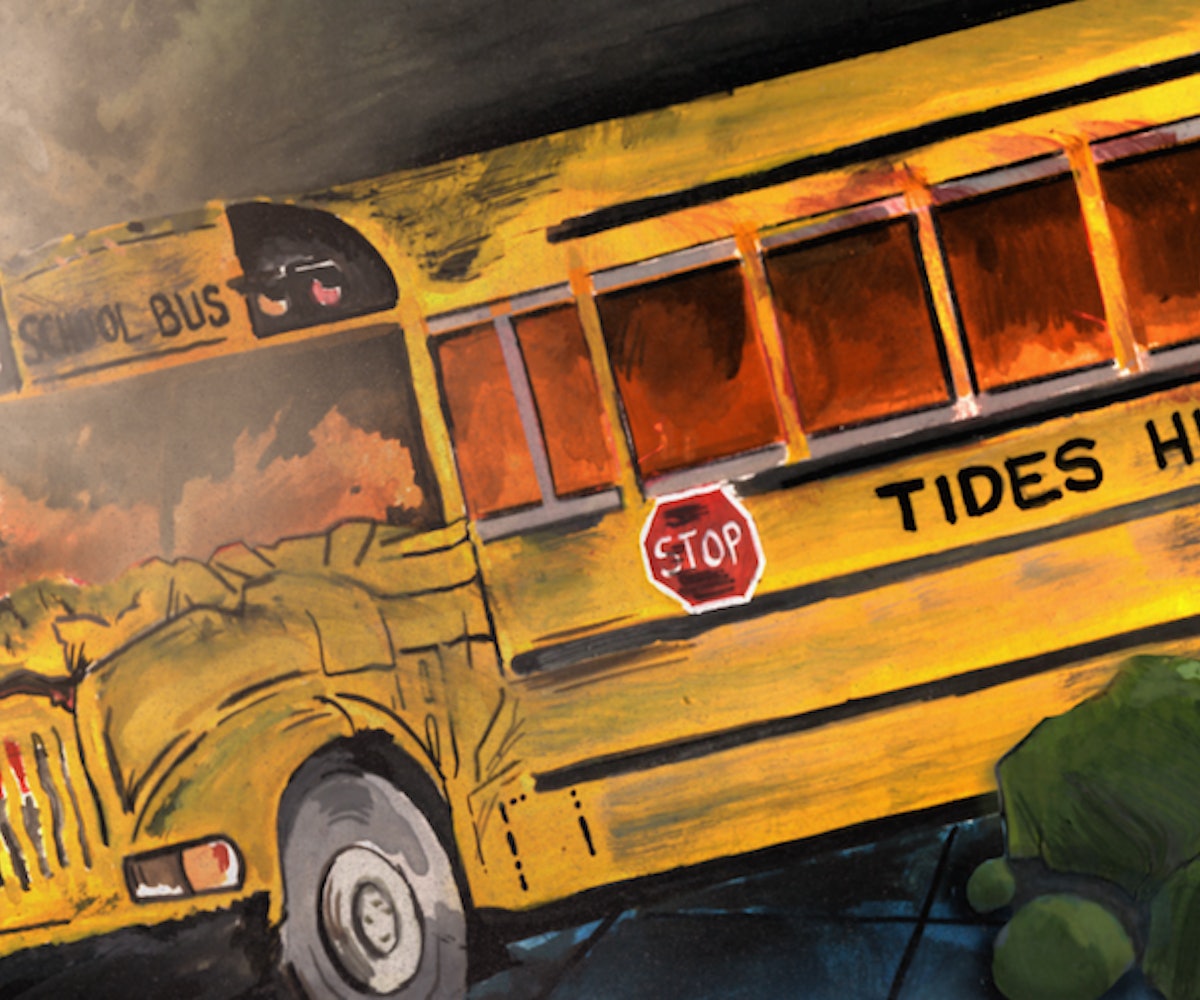 When you hear about a movie named My Entire High School Sinking into the Sea, you, well, obviously you laugh knowingly first, because who hasn't, at one point in their life, thought about the pleasure of having that happen? But then also, you probably grow intrigued and wonder what the film is actually about, because it can't actually be about, like, an entire high school sinking into the sea, can it?

Guess what. It can. And it's glorious. Oh, it's also mordantly funny and surreal and horrific, but, most of all, there's a blinding, biting glory to the way in which cartoonist-turned-filmmaker Dash Shaw managed to subvert the classic high school coming-of-age narrative, you know, the kind where everything seems like it's a matter of life or death, into a storyline where, like, literally everything is a matter of life or death.

The animated film, which features the voices of Jason Schwartzman, Lena Dunham, Reggie Watts, Maya Rudolph, and Susan Sarandon, centers around sophomore and aspiring writer Dash Shaw (Schwartzman) and his best friend Assaf (Watts), after they have a falling out related to, what else, a girl. Well, and journalistic integrity. But so, sounds normal for a high school movie, right? It is, until, that is, a fault line opens up under the school, sending Tides High into the ocean.

Visually, the film is stunning, a testament to the inspiring artistic partnership between Shaw and lead animator Jane Samborski (who is also married to Shaw), with the sometimes deceptively simple cartoon renderings working in tandem with the well-paced and -plotted script. Recently, I spoke with Shaw about what it was like taking his cartoons into a new, moving medium, how he got his wonderful cast of actors on board the film, and what it is about high school that makes for excellent movies. You can also watch the trailer for the film, below.

The movie is really visually stunning and faithfully evocative of your original drawings; what was the process like transforming your static comic art into a moving medium?

All of the animations that I like, they're called limited animation or low budget animation, are derived from comics, like the Charlie Brown Christmas Special or Astro Boy and Speed Racer, and so in those instances, they're cinema, they're movies, but they're very, like, clearly derived from comics; and so much of the aesthetic and even the pace of some of those Charlie Brown Christmas Specials is totally, 100 percent about interpreting comics into this other time-based medium. So, I thought that it would be cool to try and participate in that. So the way the movie's colored—that kind of unaligned coloring—is from my comics, but also is like a lot of old comics that were colored very quickly. And since the lines are very legible, you can follow it, but I hadn't seen that kind of coloring in a movie. And even the story idea... like, when I was a teenager, the majority of alternative comics were auto-bio comics, and there was a cartoony version of the author.

What were some of your other influences?

A lot of the movies that I like come from interpreting books. Like, I love the Cosmopolis movie and the people in that movie talk kind of strangely, a way we know from Don DeLillo's writing, but when it's in a movie it's weird and different, and I always thought that was super cool. It was exciting. Even so much of this movie is a dissonance in how people are speaking or reacting to this abstraction and the strange things happening around them and that dissonance is something from comics. Like in Dan Clowes' comics, the words are often very different from what's in the pictures; the pictures are like reality and the words are like the interior world of the characters. Or like Raymond Pettibon, the juxtaposition between pictures and words is very different and far apart, but the power of those drawings is choosing the right odd pairing of picture with word.

The dissonance played a really big part in my experience of watching it, especially as the narrative events got more and more extreme. Like, it goes from this kind of very typically angsty, very relatable outsider's perspective in a high school, to what it's like dealing with massive catastrophe and your own mortality in a very real way. It was really a powerful mind fuck.

Another big part of why the experience was so powerful was how great the voice actors are. How did casting come about?

I didn't think I would get good actors... but when we had like 80 percent of the movie drawn, I thought I had to try and find [some] actors. So I'd met these two producers at the Sundance Labs, Kyle Martin, who had done Tiny Furniture and Craig Zobel, who did a great movie called Compliance, I asked them to help and they said yes, and on our first lunch meeting they suggested Jason Schwartzman, and I said, "Oh, I know him." I met him many years ago and we kept in touch and I had his email. And I honestly never thought that these actors would agree. It felt impossible. But Craig and Kyle were pushing me, and so I asked Lena, I knew John Cameron Mitchell, a lot of these actors knew me or they knew my sensibility and they all said yes. And it was really amazing and surprising. And suddenly this thing that I didn't think anyone would see, I was like "Oh, people might see this. It feels a little more like a real movie." And it didn't change the scale of the movie, the look of it; it felt like the same movie, but now there was such a greater emotional, human element in it, because drawings are abstractions and unreal and the voice is like the soul of the cartoon shooting through. So if you have Maya Rudolph and Reggie Watts flirting with each other and going through that, that's the very sincere voice shooting through all of this weirdness, all of this strangeness. It amplified everything about the movie having a great cast.

Jason Schwartzman in particular is so good at playing frustrated writers. Like, did you ever see the movie Listen Up Philip?

Yes, I love that movie. He was just finishing that movie when he recorded my movie. I hadn't seen it yet. I love that director, though, Alex Ross Perry. He was actually supposed to be in this movie, voicing a book critic. But he got cut. I don't know if he knows yet. But he makes movies. He'll understand.

How was it to go from writing dialogue in a comic setting to writing a screenplay?

I thought it would be a lot more similar, like when I first started trying to write more scripts, I thought, like, I've made these books. I've made characters. I can tell stories. I felt very confident that it would be easy to write a screenplay, and then when I started working on it I realized how different they are and what different mediums they are. I think a key thing is that movies are very time based and comics are very collage-based, like, juxtapositions. It's an art form where time has been flattened. And so the reader controls the time. You can kind of suggest things, but often, it's more like you're building a collage, whereas time in movies is the most important thing, more important than the visuals. You know a music video can have super cool unusual images but it can still seem boring 10 seconds in. Most movies don't have interesting visuals, but still something about the way it's paced, the very subtle time distortion and time arrangement is what makes things interesting. And that's what's in the screenplay too. So it was really a learning curve.

You worked with your wife, Jane Samborski on this film; she was the lead animator. How was that experience?

Jane was trained as an animator. Her parents worked the craft circuit, making puzzle boxes. I feel like she has a craft person's frame of mind. She really figured out how to execute the movie, make complicated animations and compile it all in AfterEffects. She was really the technical wizard behind the movie. Not to sound cheesy, but we completed each other. I didn't know how to do these technical things, and she doesn't write scripts, she doesn't have an interest. So we both needed each other to make this thing.

What is it about high school that lends itself so well to story telling? Everything seems so tragically important, even when it isn't. Even though, of course, in this movie everything is pretty tragic and important. But, like, why are high schools such a rich narrative setting?

I think it's probably a few things. One is that it's a great situation where a lot of different people are forced to interact with each other. Like it's hard to make a scene as adults where people with enough different opinions would interact, but in school you're all trapped with each other and then that's amplified when everyone's this messed up 16-year-old person who's got this crap they're trying to figure out. I tried to think of it honestly as a metaphor, where they're moving up through society, or any kind of system. Like, society tells us that the sophomores are smarter than the freshman and the juniors are smarter than the sophomores, but we know that's not true. And when the students are questioning the teachers, iI hope it feels like they're questioning all authority, or like all the generations above them. I feel like it's a symbolic universe.

My Entire High School Sinking into the Sea is now playing at select theaters.