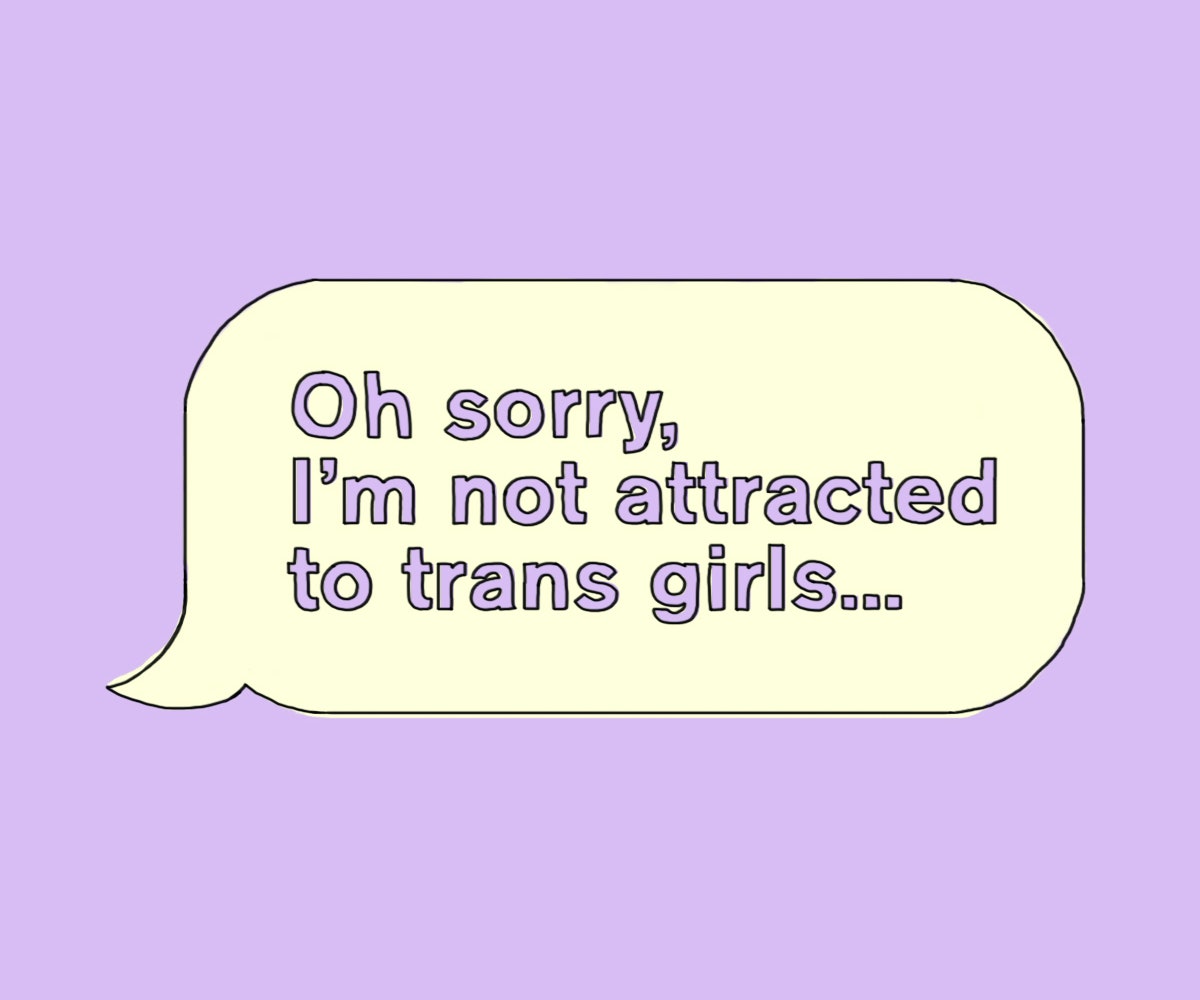 NOTE: This piece is specifically dealing with cis and straight-identifying men and their relationships with trans women. There are of course many different other kinds of experiences in terms of gender and sexuality when it comes to dating as a trans person.

“Would you wanna go out sometime?” he asked via an OkCupid message.

“Sure,” I replied. “But before I take anything offline, I always make sure guys have read my profile and are cool with the whole trans thing.”

About 15 minutes go by; this came after he had been rapid-fire with his responses earlier in the day. Finally, I got a message back, “Oh, sorry. I didn’t see that. I’m not attracted to trans girls. I really appreciate you letting me know.”

I type back, “Firstly, you are attracted to trans girls because you messaged me. What you really mean by that is you’re too insecure about what others will think of you if you date a trans girl. Secondly, I don’t disclose to protect your ego, I disclose to protect my life.” But then I take a deep breath and delete it all while telling myself, Pick your battles girl.

There is still a huge stigma attached to dating a trans person, especially for cis and straight-identifying men. I have heard countless variations on the phrase, “He’ll sleep with me, but he won’t take me home to his mom.” There’s a high degree of fetishization and objectification of trans people. I believe a lot of this has to do with internalized shame surrounding sexuality and masculinity combined with the pervasive view that the gender of trans people is performative. This is of course not helped by movies such as Dallas Buyer’s Club which depict trans people with cis male actors dressed as women and constantly engage in clichés, like when we see the character Rayon emotionally removing her makeup and wig to reveal her hidden maleness underneath.

These media portrayals of trans women are not only insensitive but enforce societal stereotypes about who we are. Some of this is helped by increased trans visibility, but there’s also the ways our patriarchal society and rigid definitions of masculinity, femininity, and sexuality affect everyone, and therefore require everyone to dismantle them. Just like how the battle against sexism needs male allies, there’s only so far we, trans people, can push the boulder up the hill without the help of our cis allies.

“Ultimately I think that, in general, if people were less ashamed and had less shame thrown their way... I think that things would be much easier for trans women to find romantic relationships. Me, specifically, when I was younger, it started mainly with a fetish,” one man who had a previous long-term relationship with a trans woman told me. When I asked him what changed that led him to have a serious relationship with a trans woman, his response was simply, “I grew up.” It’s often not about whether or not someone is attracted to trans women. Straight men are attracted to trans women all the time, even if they don’t know those women are trans. It’s what this person brought up that often keeps men from engaging in meaningful relationships with us; the fetishization and objectification happen when there’s enough comfort to act on their attraction, but too much concern about what others may think about their sexuality or manhood if they bring a trans woman home to Christmas dinner.

I was out with a friend the other night, and she told me that one of her cousins is currently dating a trans woman. She had a conversation with her other cousin, his older brother, about it, and he said, "It just makes me look at him a little differently. Now I’m wondering about his sexuality." Of course, dating a trans woman does not make a man gay, just as dating a trans man doesn’t make a gay man straight, but that type of misconception is pervasive. Meanwhile, sexuality doesn’t get to be defined by anyone but the individual person in possession of it.

I spoke with another cis and straight-identifying man, who had never dated a trans woman, but told me he was open to it; he said, “When it comes to the stigma, I believe it falls to the cis person.” While we, as trans people, can reduce our own stigma via visibility and activism, relationships are partnerships. So it falls on the trans person's cis partner to talk to other cis people about trans people in ways that do not encourage the view that dating us makes someone gay or otherwise challenges their self-established sexuality. Or, for that matter, makes us the butt of a joke: And then it turned out she was really a dude! (Rimshot?)

With our increased visibility, the trans community does and will continue to push back against these stereotypical notions of who we are. But when it comes to dating, we often struggle to convince cis men that we’re worth more than a torrid one-night stand. Within a relationship dynamic, trans people have a responsibility to our community; meanwhile, the people who date us—like any person who dates someone from a marginalized group of people—has a responsibility to understand our struggle and educate themselves and their community. Cis men need to convince each other of trans women's right to be treated with respect by talking to each other about it. That’s why, while our own visibility is important, the trans community needs the voices and faces of those who love us to be visible as well. As Laverne Cox said about our society's rigid gender and sexuality norms, “Loving transgender people is a revolutionary act.” We need the people who date us to be a part of that revolution. We can’t do it on our own.

Another day, another dating site message. I once again wrote my usual missive, “Before I take anything offline, I want to make sure you read my bio and are cool with the whole trans thing.”

“Totally, doesn’t bother me at all!” he responded.

I give him my number. We text for days. We make plans to meet up. The night before we’re set to have our first date, I text him: “Where and when should we meet tomorrow?” No response. Of course, I don’t know why he ghosted. But I can only imagine it was fear. I get better at brushing it off and moving on. I do still believe that one day, some enlightened guy will come my way. As one of the men I spoke to said, when I asked what can be done about preventing this from happening, “My main hypothesis is time.”