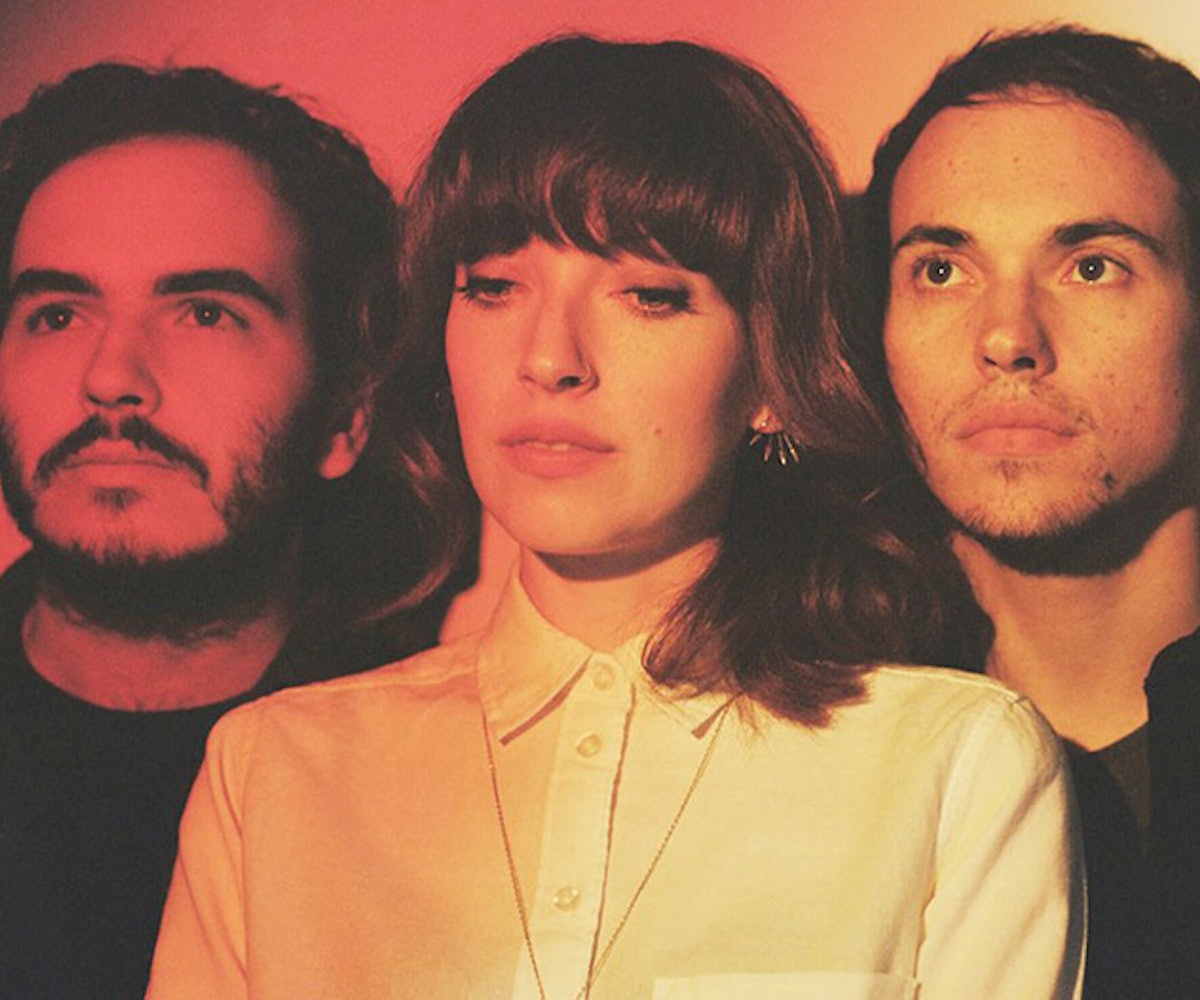 No matter what prompts us to turn to music, it’s comfort that we seek at the end of the day. We long to see ourselves in the song and hope it validates whatever it is we might be feeling. We want the music to remind us that we aren’t alone. It’s this very idea that drives British band Daughter’s new album, Not To Disappear, and envelopes you in its brooding atmosphere.

Where Daughter’s last album, If You Leave, dealt with the sadness of a relationship gone by, Not To Disappear is a melancholy study of loneliness. Haunting in its delivery, Elena Tonra and her mates, Igor Haefeli and Remi Aguilella, paint an intimate, all too relatable portrait of solitude and the bittersweet unrest that comes with it. Tonra’s lyrics read like a diary entry, and her delicate vocals ebb and flow among swelling guitars, drums, and more present synths. It’s the perfect companion to those dark times life throws our way.

We caught up with Elena Tonra before the release of Not To Disappear on January 15th, to chat all things journal-keeping and the art of solitude.

In the two years since Daughter’s first album came out, how have you changed?

As a band or as humans? [Laughs]

The dynamic of the band. I know this album is more about loneliness than it is about a relationship falling apart—so was there a period of loneliness that you all went through to inspire it?

Yeah, I think so. I mean musically, in terms of us as a band, we toured so much after the first album came out. We were basically on tour for two years. It was a wonderful experience in terms of going to lots of different places and lots of cities and meeting lots of people and playing for a different audience every night. It was a really beautiful experience, but I think there was a part of that lifestyle that’s very surreal and disconnected. The constantly being on the go and never being in a place for very long...You try to absorb as much of a place as possible, and then you kind of play a show, and you’ve got lots of people there and then you go back to the hotel room and eat dinner and literally just sit back and watch bad television. It’s this weird and surreal lifestyle which I think, obviously, has an essence of loneliness. I think you always feel a bit small in huge places with lots of people. So yeah, there’s definitely an element of that in the record. But I think there were other forms of loneliness that went into it, like feeling alone when you’re with someone else: You know, you shouldn’t be feeling alone, but you are. In terms of the band, I think we work with each other better, or at least we know each other better. We know how each person works. Sometimes that’s stressful, sometimes you don’t work the same as other people. There were a few arguments along the way, but I think it’s all for the better. You need a bit of creative tension to get the best results. I think we all are definitely a bit more confident and our sound is a bit bigger.

How did you guys experiment with this album? Did you do a lot more with upbeat songs or something different? How did you experiment?

We said to ourselves, from the very beginning, that we were going to keep every option open in terms of instrumentation and also in terms of not thinking about the first album and what we were doing in relation to that. We wanted to see it as kind of a blank canvas—a fresh start—which is great, because I think that we introduced a lot of different sounds. There’s a lot more electronic elements on this album, especially in terms of the drums. There are a lot more synths and even in terms of the lyrics, the way I was writing was quite different this time around. It wasn’t intentionally different, it just kind of came out like that. It’s a lot more poetic, but also it’s more direct, like I’m just talking to someone. It’s interesting to write like that. I actually thought I had lost the ability to write, but then I realized that it’s just obviously the new sound. It’s come out like that, and that’s maybe a good thing. It’s nice to have a different perspective on stuff.

It definitely feels like you’re sitting in on a conversation that you’re having with this other person.

Yeah, there are a few songs where I think, “Oh! I don’t know if that’s too much information.” [Laughs] I could have edited things out, but I think that wouldn’t have been honest. I need to be honest in my writing.

What books and/or movies have influenced you the most?

I don’t know...that’s a good question! I think, to be honest, I actually read a lot of non-fiction books about psychopaths. [Laughs]

I recently read an essay about Joan Didion and keeping a notebook. Since all of your music seems like a diary entry...do you keep one and if so, why do you keep it?

I actually don’t keep one, just because I am very disorganized! I’ve been given lots of different notebooks from different people, though. I think they think that I am a very organized writer, but I’m not at all! I’m very sporadic. I guess my journal would be my songs. I feel like I store things up in my head and then when I feel like I have an idea, it kind of all comes out. It’s very much about people and places and things people have said. That’s really my way of keeping track of what’s going on or what I’m feeling. I can look back at lyrics and think “Oh, that’s how you feeling about this…” I used to make weird planners. I love lists. I’m actually much more of a list writer than I am a journal writer. [Laughs] It's weird considering I’m so disorganized in other respects but I love a list.

If there’s one thing that your audience and fans walk away with from the album, what would you like that to be?

I hope that people listen to it and truly feel something when listening to it. I think we are all unique and we’re very much isolated and really by ourselves. We make the music in the dark and don’t have any kind of expectations with how people are going to think about it. I hope it’s uplifting in some way. I listen to it and think that it is and somebody might listen to it and think “Oh, bloody hell! It’s so sad” but I do think it’s something quite uplifting. I think there’s something stronger in it than there was in the first one. It’d be nice to feel like that’s coming across—this new kind of strength and confidence.