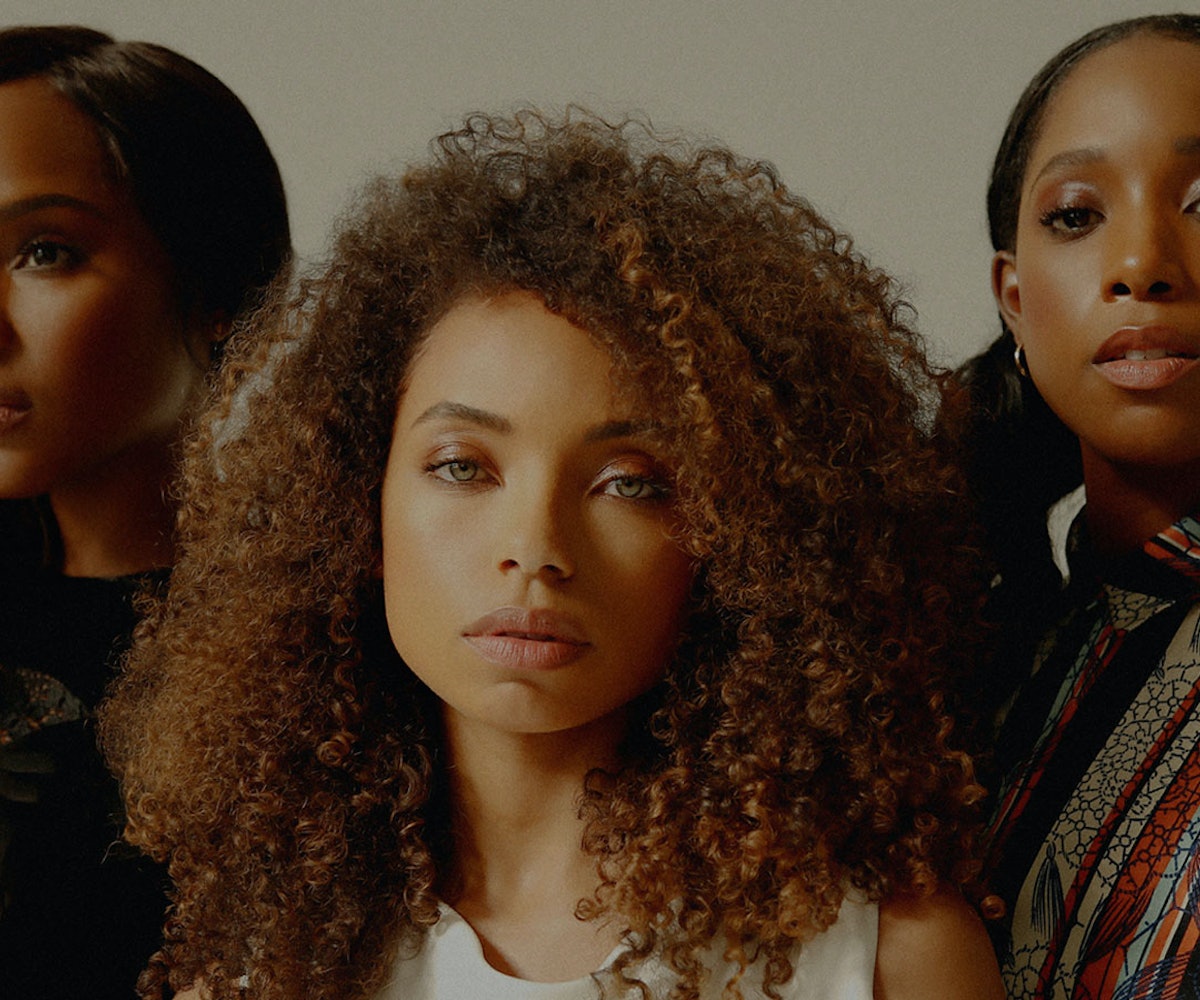 By the time I got to the sunny photo studio in Hollywood, the three lead actresses of the new Netflix series Dear White People had been posing for the camera for five hours straight. Starbucks empties and half-eaten salad clamshells were scattered around the room, and the Spotify playlist seemed to be hitting more ads than usual. If I were them, I would have been exhausted.

But after they quickly changed back into civilian clothes, I found myself facing a triple charm offensive lined up on the studio’s one couch, all ready to talk about the new show (premiering this Friday) like a group of BFFs co-telling the story of their last crazy road trip.

Ashley Blaine Featherson (Joelle on the show, and in the 2014 Dear White People movie upon which the show is based), sitting in the center, took a chatty lead once the conversation started rolling. Antoinette Robertson (the show’s Coco, a ruthlessly ambitious social climber with a pained relationship to her own blackness) had a more contemplative approach, thinking for a second, then unrolling her thoughts in complete, punctuated paragraphs. And Logan Browning (who plays Sam, the brazenly political host of the Dear White People radio show-within-the-show) seemed happy to sit back and lob one-liners until a question she gravitated toward came along.

We had a lot to talk about, including an online backlash in response to a 34-second teaser released earlier this year, where trolls and members of the conservative media whipped up an outraged frenzy, with some people threatening to cancel their Netflix subscriptions over the “reverse racism” of the show’s title. It was a sobering reminder why shows like this are needed in the first place.

Dear White People, the movie, was a shaggy satire of student life and race relations at the overwhelmingly white Winchester University, made by writer and director Justin Simien for almost zero budget. It was ambitious and funny, with an ensemble cast of black students grappling with prestige and identity in a sea of money and whiteness, but it felt a little like the first draft for something better to come.

Dear White People, the Netflix series, is that something. Part of its strength comes from its dedication to a strange conceit: Every episode treats a different character as its protagonist, rehashing some of the same events, Rashomon-style, from different perspectives. The show picks up right where the movie left off, in the wake of an egregious blackface party thrown by the campus humor mag, but Simien has used the expanded format of a 10-episode TV show—and all those Netflix dollars—to bring the world of Winchester fully to life. Characters that felt like caricatures in the movie get to act out real stories, and jokes that fell flat on the big screen have bloomed (and, in some cases, grown teeth) in the new format. One blockbuster episode, directed by Moonlight’s Barry Jenkins (but whose plot Netflix is at pains to keep secret), might be the most real 30 minutes of TV 2017 is going to see.

All that to say that Dear White People—and its breakout stars—are going to be big. Hear more from them below.

Was the vibe on set a lot different from other projects you’ve worked on?

Antoinette Robertson: Oh my god, it was like summer camp.

Ashley Blaine Featherson: So much fun.

AR: We have videos of us playing patty cake. It's ridiculous.

AR: And we also had some really impactful, meaningful, gut-wrenching, beautiful, authentic bonding moments that took place, and I think we're forever bonded by those.

How long was the shoot?

Wow, you wrapped on election day?

ABF: Yeah, literally. It was such an interesting, eerie, weird, sad, exciting day.

AR: I kept saying, “No, man. It's clickbait, he's not winning, it's clickbait. It's fine, it's fine, let's just stay positive.”

LB: The entire set was so depressed.

LB: And I literally took John Patrick [her scene partner] and pulled him outside, and I said, "This doesn't exist for us. Because you and I are Sam and Gabe [their characters], and we have to exit this. We don't get to be a part of the real world right now."

Antoinette wears on left: dress by Cinq a Sept. On right: top by Rebecca Taylor and skirt by ACL.

Were there any moments when you saw where your characters’ story was going and thought, "That's kind of a lame choice?"

ABF: That's what going to draw people to the show. There aren’t any moments where people are like, "I don't know if I buy that." And we always watch shows like that. It happens all the time.

LB: The reasons I love my friends so much is because they are so completely different, and that's absolutely what this cast of characters is. You watch this show, and you want to be their friends.

Well, I wanted to ask you the same thing. With the troll army that's already responded to just the date announcement on the internet, do you think people who don’t already agree with a lot of the show’s politics will be watching?

ABF: All the trolls hitting the dislike button are going to be the first ones watching the show.

ABF: I can see them watching the show and being like, “Oh, this is not at all what I thought this was going to be, and I actually like this. And I feel like I'm changing as a human being, and becoming a better human being. But I can't let anybody know."

AR: I feel like the people who have a heightened awareness about the racial divide that exists right now are going to be the people who gravitate to Dear White People, and will find comfort in its message, because they're open to it. And I feel like those people will definitely be the ones to encourage the naysayers.

ABF: We hadn't! Barry was so sweet.

AR: He set up a screening for us after we shot the episode.

ABF: I left the screening thinking, “So, if that's what he did with that, then I can only imagine what he's about to do with that episode he shot."

AR: He's a very compassionate director. There were moments when he and Justin took the time to make sure that we were okay, after certain moments that could've possibly been traumatic to us. It was like, "It doesn't matter if the company's paying for it—I have to make sure my actors are okay before we move forward," and that, I thought, was invaluable.

ABF: That episode was transformative for me. For my character, for me as an actor, as a black woman, just as all these different things.

Have you guys been getting any weird stuff on social media, from the backlash to the trailer?

ABF: I haven't been trolled yet, thank god, knock on wood.

AR: People found their way into my DMs to say racist stuff, but I just kind of turned off the notifications and stopped checking them.

ABF: Nobody's come for me. Why aren't people coming for me?

LB: Well no one comes for me, but if anyone says anything, it's so easy to block them.

With the timing of the shoot, does it feel like the show is an accidental response to the Trump era?

AR: We knew it was needed then, but I feel like now, more than ever, with the type of intolerance and hatred that's going on in our society, I think people need this show.

LB: It was written in an Obama presidency—this is why art and time are so interesting—but people are going to be receiving this show in a Trump presidency, and it's going to affect them differently, and we have no idea what that will be like.

ABF: It's so little about Trump to me, and more about relationships, and finding yourself, and being aware of the color of your skin and how that affects your life and how to deal with that in a strong and confident way.

LB: I feel like it’s bigger than just the politics, it’s these characters' stories, and these college kids figuring life out, figuring out their identity, and even though maybe, sure, it is a clapback to Trumpism, I feel like these stories are even more important.

AR: For sure. And it's nice that the universal theme is self-discovery, how we're all going through this thing called life, we're all struggling to figure it out.

LB: And it reflects the level of activism that young people are challenged with now. Like young people wake up now and have to choose very quickly if they are going to be involved with a cause and how they're going to do that.

Along the same lines, were you looking for more political, activist-y roles before DWP came along?

AR: I found myself getting really, really upset with everything that's going on in society, and I wanted to find some way—and I'm gonna use someone else's quote—to have my art be a function of my activism. And I didn't quite understand how to do that, so I assumed that I’d have to write something myself. So when this show came along, it just felt like a blessing for me.

ABF: Yeah for me, there's a lot of content out right now that's entertaining, but it's not saying anything. As actors, a lot of times, that's the work that we take and we get, and it helps us grow as an actor and we meet people and we work with awesome directors, but we don't necessarily leave feeling like we made an impact on society or on the world or on what's happening currently.

LB: Let me say this: When we talk about trolls and people who like to start drama in general, one of the things they talk about is that actors and artists should stay in their lane; they should not be involved in politics, they should not be involved with social change, but we are human, we are allowed to have opinions and we are allowed to share those opinions.