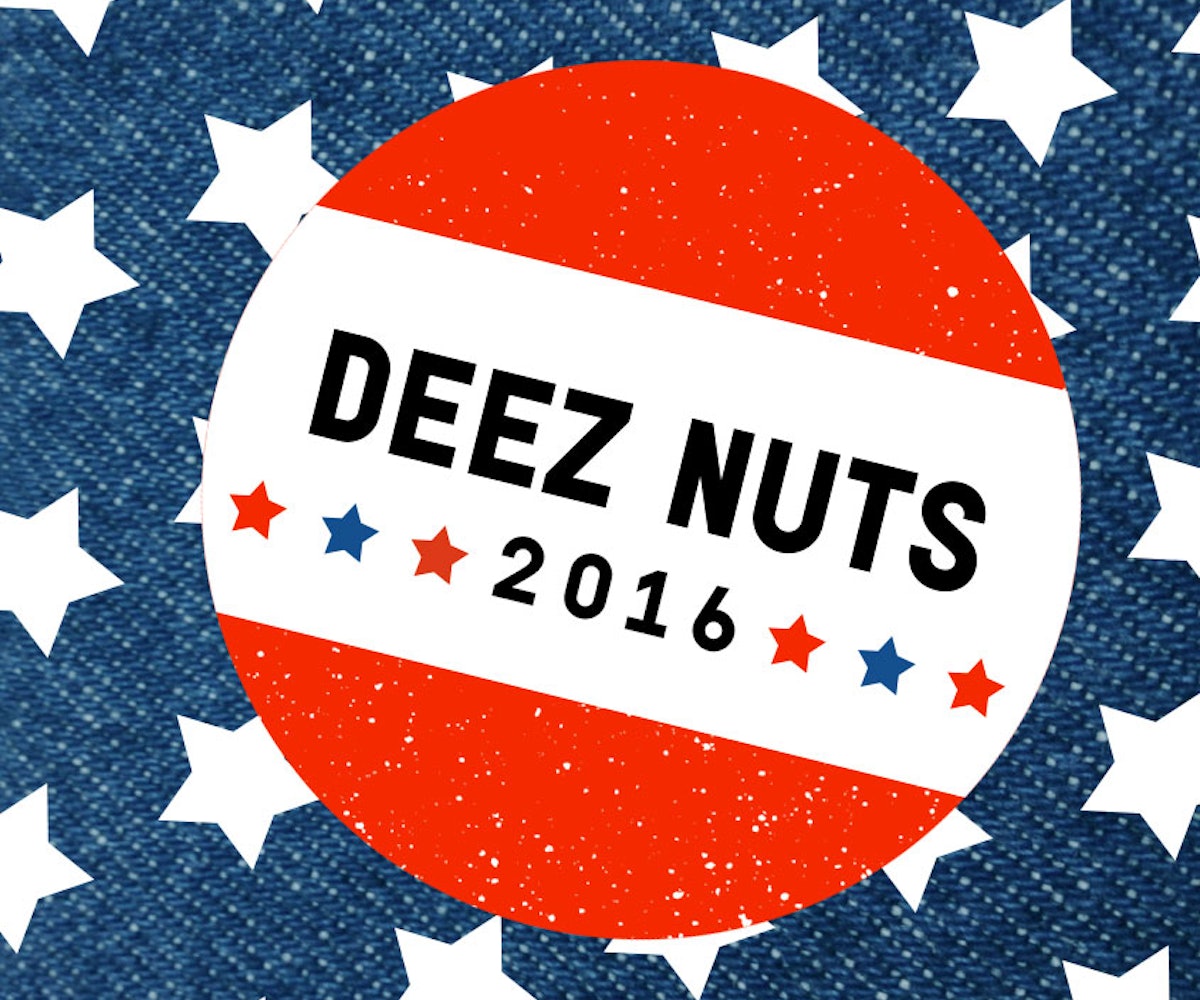 “You following the election?”

For generations now, giddy middle-schoolers and the giddy men they become have been dropping “Deez Nuts” jokes both good and bad into cafeteria conversations, prank phone calls, text-message threads, and classic rap albums. Thanks to one brave, brilliant American though, “Deez Nuts” has become a joke where the punchline is our broken political system.

As you may have heard, “Deez Nuts” is an official, registered candidate for the U.S. presidential election in North Carolina. According to recent polls, “Nuts” is not doing all that well—his (or her) unfavorability numbers are high, particularly among women.

That said, in a tight, theoretical race, “Nuts” is polling at 9 percent. This means almost one in 10 North Carolinians not only get the joke, but agree with its semi-implicit suggestion that the current election cycle is such a farce—having started a full year early and being dominated by a reality-television star and a democrat who may or may not be a robot—that they might as well throw their support behind a creaky, sophomoric goof. Good on you, North Carolina.

And, yet, the patriot behind this joke isn’t even from the Tar Heel State. As The Daily Beast discovered from the good of us all, it’s 15-year-old Brady Olson of Wallingford, Iowa.

Inspired by feline candidate Limberbutt McCubbins, Olson filed for candidacy with the FEC using “Deez Nuts” as his name—this despite the fact that he’s not old enough to drive, let alone take the office of President of the United States. Certainly, the open nature of the FEC has allowed fake candidates into races before. Thanks to social media and, yes, this election's inherent absurdity, this fake candidate seems primed to go much further.

The Daily Beast gets into the meat of how this was able to happen and other reasons why—other than the fact that its objectively hilarious—“Nuts” is polling surprisingly well. Read the full piece here and now.

What’s most interesting and impressive, though, is that Olsen isn’t satisfied with simply appearing on state polls around the country. “The next step is to get some party nominations, like the Minnesota Independence Party or the Modern Whig Party,” he told The Daily Beast. “It would also be great to find a VP, preferably McCubbins because the Nuts/McCubbins ticket sounds amazing.” Indeed, sir, it does. We salute you.

(Via The Daily Beast)